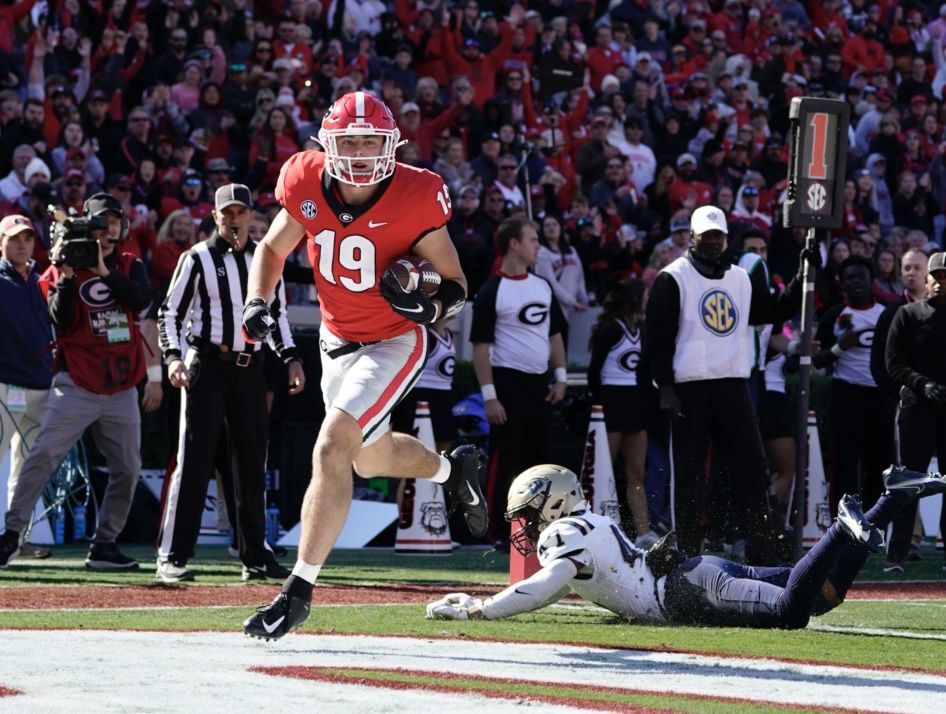 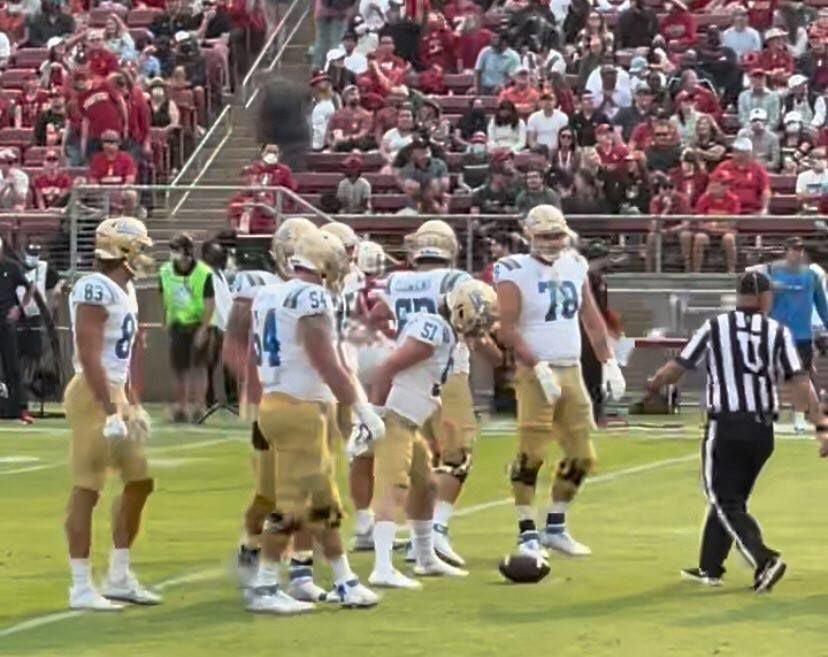 American Canyon High graduate Lucas Gramlick (78) and the UCLA offense gets ready to run a play earlier this season.

Brock Bowers, a freshman from Napa, started at tight end for the University of Georgia and caught two touchdown passes as the host Bulldogs remained undefeated by beating Charleston Southern, 56-7, on Nov. 20 at Sanford Stadium in Athens, Ga.

Bowers, a 2021 Napa High School graduate, had first-half touchdown receptions of 4 and 7 yards, respectively. He also had a 19-yard run on a reverse to set up his first score.

He leads Georgia with 34 receptions for 552 yards and eight touchdowns.

He already owns the school record for most TD catches by a tight end in a single season with eight, according to georgiadogs.com.

“He’s stayed healthy. We really haven’t had anybody else who has been consistently healthy across the board,” Georgia head coach Kirby Smart said on Monday at georgiadogs.com.

“The biggest thing with Brock’s consistency is, number one, he’s not just a role player. He can block and plays with physical toughness. He’s very intelligent. He takes notes. He comes in early and watches his tape. When you have dependability and talent mixed together, it’s usually what you get, and you have a guy who has put up the numbers he did.

“Again, he takes opportunities for all the games we’ve played.”

“He’s phenomenal; to be that size, have those ball skills, and run as fast as he can is crazy. It really is crazy that he is able to do that. It’s really like having someone who can block like a tight end but also having another receiver on the field at the same time. When he’s out there, just watching some of the things he does, it really is special.”

Georgia, No. 1 in The Associated Press poll, faces Georgia Tech on Nov. 27 at 9 a.m. at Bobby Dodd Stadium in Atlanta.

Michael Fitzgerald, a sophomore linebacker from Napa, was named to the All-American-Golden Coast Conference first team for Monterey Peninsula College.

Fitzgerald, a Justin-Siena graduate, had 40 total tackles (22 unassisted, 18 assisted), with 3.5 tackles for a loss of 10 yards, a fumble recovery, one interception and two passes broken up in 10 games.

The Lobos (7-3) will visit Feather River (9-0) for the American Championship Bowl at 1 p.m. Saturday in Quincy.

Lucas Gramlick, a redshirt junior offensive lineman who is from American Canyon, played for UCLA on Nov. 20 in the Bruins’ 62-33 Pac-12 win over USC at the Los Angeles Memorial Coliseum.

Caleb Tremblay, a redshirt senior from Napa, started on the defensive line for Tennessee in a 60-14 win over South Alabama on Nov. 20 at Neyland Stadium in Knoxville, Tenn.

Tremblay, a Vintage High graduate and a transfer from USC, had two assisted tackles.

De La Salle-Concord (10-2) is No. 1 in the MaxPreps North Coast Section Rankings, announced at maxpreps.com on Nov. 21.

Three CIF North Coast Section teams are in the new State Top 50 Rankings, announced by CalHiSports.com in a report at calhisports.com on Nov. 22.

The schedule for the state championship playoffs and bowl games was announced by the California Community College Athletic Association in a report posted at cccaasports.org on Nov. 21.

The schedule for NCFC bowl games:

American Canyon High graduate Lucas Gramlick (78) and the UCLA offense gets ready to run a play earlier this season.