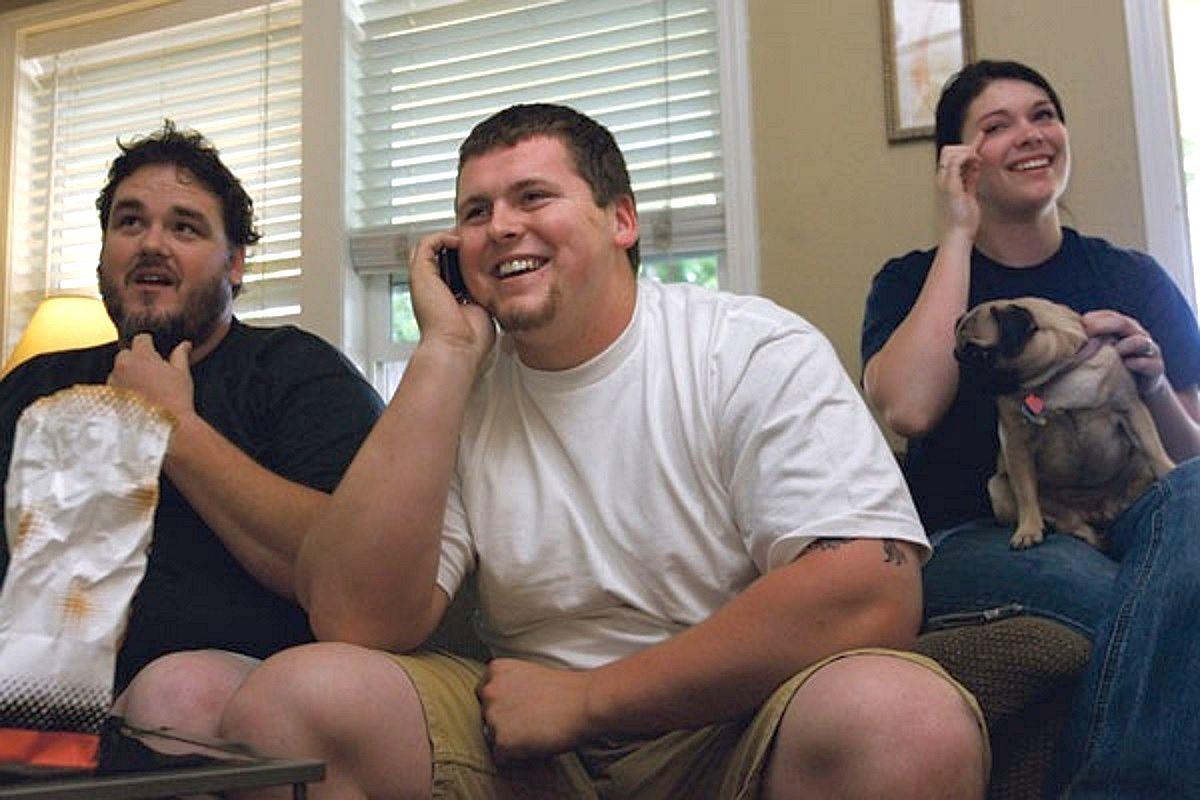 Offensive lineman Mike Gibson talks with then-Philadelphia Eagles head coach Andy Reid after being selected in the sixth round of the 2008 NFL Draft by the Eagles. With him are his wife, Jessi Gibson, who joins him in the 2020 class of Napa High Athletic Hall of Fame inductees, and his uncle, Rick Steinburg. 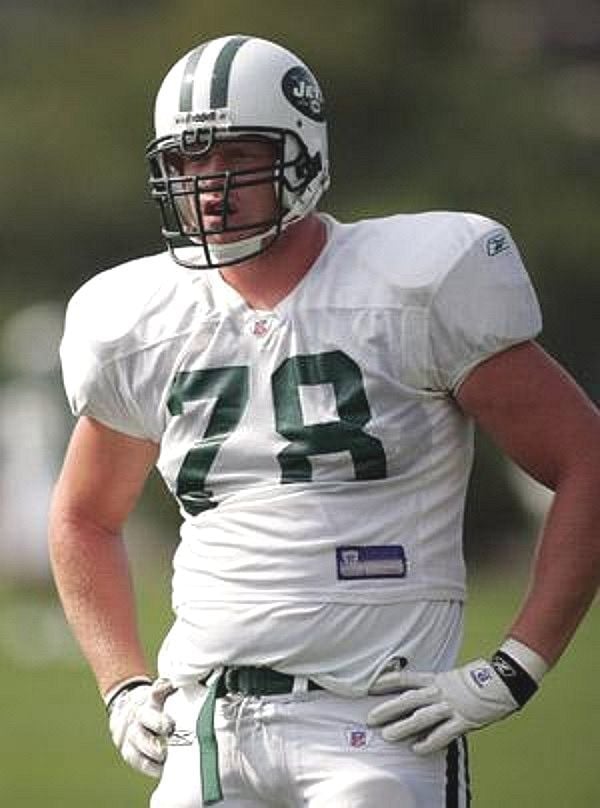 Mike Gibson and Ed Blanton, who both played major college football before going on to the NFL as offensive linemen, are in the newest class of inductees to the Napa High School Athletic Hall of Fame.

Also were elected to the 2020 Hall of Fame in recent voting by a selection committee were Joe Richmond, Ron Fisher, Michael “Buddy” Connor, Jessi Emery Gibson and Ira C. Smith, the longtime sports director for KVON-1440 AM and KVYN-99.3 FM radio.

Because Hall of Fame events were canceled last year because of the COVID-19 pandemic, the 2020 class and those selected later this year for the 2021 class will be honored at a dinner and induction ceremony on March 5, 2022 at Embassy Suites by Hilton Napa Valley.

“What I really like about the class is we kind of have everybody covered, from athletes to coach to the special category,” said Duey Green, the selection committee chairman and vice president of the Hall of Fame Foundation. “They’re special people.”

The Hall of Fame’s selection committee votes on the nominees after reviewing the nominations and hearing presentations by nominators. A successful nominee needs 75 percent of the total points possible.

“They’re all very, very deserving,” said Tom LeMasters, president of the Napa High Athletic Hall of Fame Foundation. “I think that the selection committee did an outstanding job in doing their homework and assessing who deserves to be in. This year’s class measures up equal to previous classes.

“Obviously, Gibson and Blanton, because of their experience both at Napa High School and afterwards, make them superlative additions to the Hall of Fame.”

The Hall of Fame Foundation’s mission statement, according to napahighhof.org, is to honor the school and its department of athletics by recognizing the achievements of former athletes, coaches and others who have made significant contributions to the school’s athletic programs, while celebrating Napa High School scholar-athletes for their work in the classroom, community and in athletics.

Individuals may be nominated in one of three categories: athlete, coach and special.

* To be eligible as an athlete, an individual must have graduated from Napa High at least 15 years ago, participated in at least one interscholastic sport as an undergraduate, and lived an adult life that did not discredit the school or the community.

* To be eligible as a coach, an individual must have coached at least one interscholastic athletic team at Napa High, been employed by or contributed services to Napa High as a coach for at least five years, no longer be active as a coach at Napa High, and lived an adult life that did not discredit the school or community.

* To be eligible in the special category, an individual must have participated in an activity that brought honor or positive recognition to the athletic department of Napa High, contributed in some substantial way to the improvement of Napa High athletic programs, and lived an adult life that did not discredit the school or the community.

To date, there are 154 members of the Hall of Fame, whose membership dates to 1912. The NHS Athletic HOF Foundation is a nonprofit organization.

In a letter to each of the newest inductees, LeMasters wrote:

The Hall of Fame was formed in 1997, with 36 inductees in the inaugural class.

“I know that Ron Fisher comes from a class that was particularly special. There were just so many great athletes in that class and in that era,” said LeMasters. “And as a kid who was probably four or five years younger than them, they were sure fun to watch. As a young athlete, I wanted to follow in all those guys’ footsteps.”

Blanton, from the Class of 2001, was a two-sport athlete (football, wrestling) and went on to play for UCLA, starting three years and earning Pac-10 honorable mention honors as a senior in 2005. He was signed by the New York Jets as a rookie free agent in May of 2006, and then was signed to the Jets’ practice squad Sept. 3. He was waived by the Jets after suffering an injury to his lower back during training camp in 2007 at Hofstra University in Hempstead, N.Y. He had surgery on his lower back Aug. 24, 2007 at Providence Hospital in Detroit.

Connor, from the Class of 2003, played football and was both the Napa County and Monticello Empire League Player of the Year as a senior. He was also Napa’s team most valuable player after starring at fullback and linebacker.

Mike Gibson and Jessi Emery Gibson are both from the Class of 2004.

Mike Gibson was the Lineman of the Year in the MEL and then went on to play two years at Solano Community College in Fairfield, followed by two years at UC Berkeley, where he was chosen All-Pac-10 honorable mention. He was selected by the Philadelphia Eagles in the sixth round of the NFL Draft in 2008 and was in the NFL for five years, playing for the Seattle Seahawks, Eagles and Arizona Cardinals. He retired after the 2013 season.

“A number of times, I went down to Cal and watched Mike play. It’s just a very special feeling when somebody from Napa is playing that type football and making an impact there,” said Green. “He made an impact because he played in the NFL.”

He also played basketball and was on wrestling and track and field teams.

Jessi Emery Gibson played basketball and softball. She was a standout in softball, receiving scholarships to play at Chattanooga State Technical Community College and the University of Georgia. She was named as the Tennessee Junior and Community College Athletic Association Eastern Division MVP after breaking the Chattanooga State school record with 26 home runs in a single season. She was named as the National Junior College Athletic Association Region VII MVP and was selected as the NJCAA Regional Tournament MVP.

He was a full-time staff member, teaching in the school’s English Department for over 30 years.

Smith has been sports director at KVON since 1976. He does play by play coverage on radio of Napa Valley sports, including football, basketball and baseball, and was also the public address announcer for the NBA’s Sacramento Kings, from 2000-2004. He did radio broadcasts for University of Michigan football.

Funded by voluntary contributions, these annual scholarships have grown consistently over the years and are now $3,500 each. The scholarships are awarded to scholar-athletes who have not only represented Napa High well in athletic competition, but also in the classroom and in the community. The recipients are chosen by the NHS Scholarship Committee, according to napahighhof.org.

The Hall of Fame is planning to start accepting nominations beginning in September for the 2021 class.

“Due to Covid 19 restrictions we were unable to complete our annual nomination/election cycle for 2020 until this year,” LeMasters wrote in the letter to the newest inductees.

Visit napahighhof.org for more information about the Hall of Fame.

Offensive lineman Mike Gibson talks with then-Philadelphia Eagles head coach Andy Reid after being selected in the sixth round of the 2008 NFL Draft by the Eagles. With him are his wife, Jessi Gibson, who joins him in the 2020 class of Napa High Athletic Hall of Fame inductees, and his uncle, Rick Steinburg.