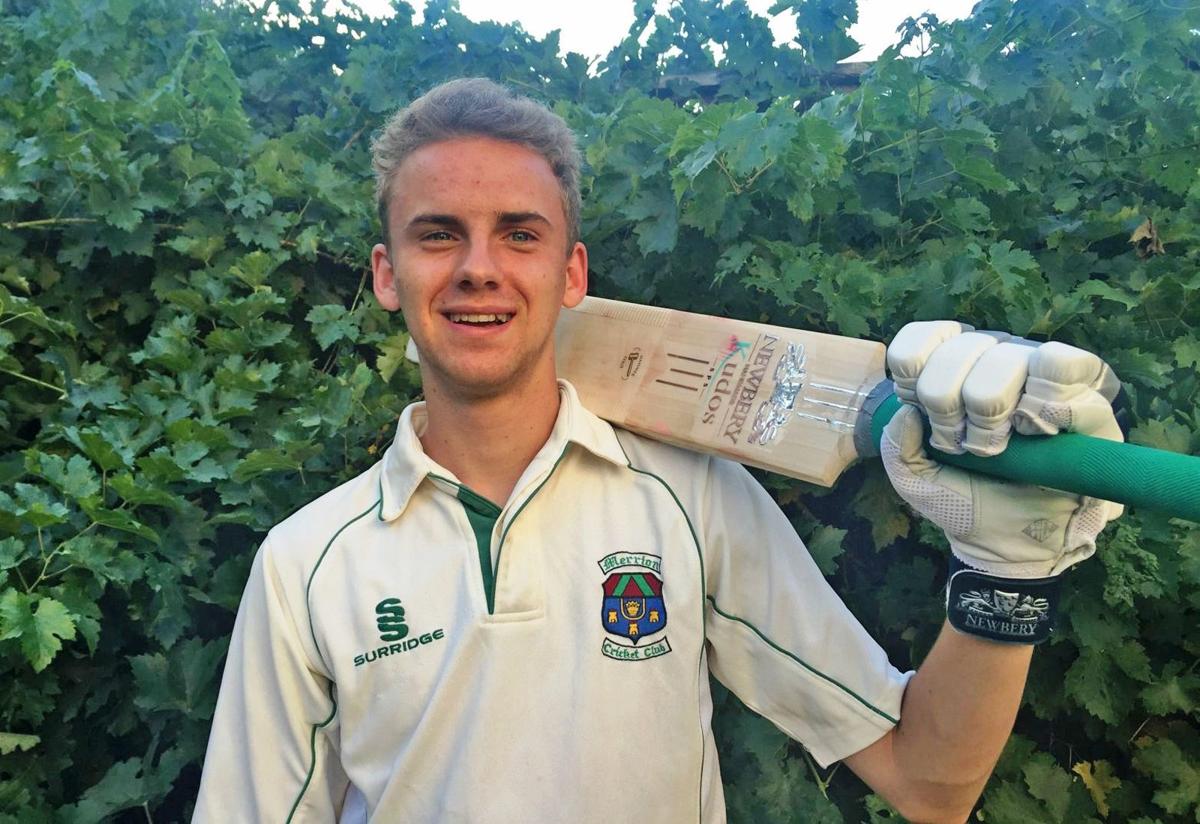 Napa High School senior Caen Healy poses holds his cricket bat with one of the gloves he uses as a wicket keeper for the Merrion Cricket Club of Dublin, Ireland and the Calistoga-based Napa Valley Cricket Club. 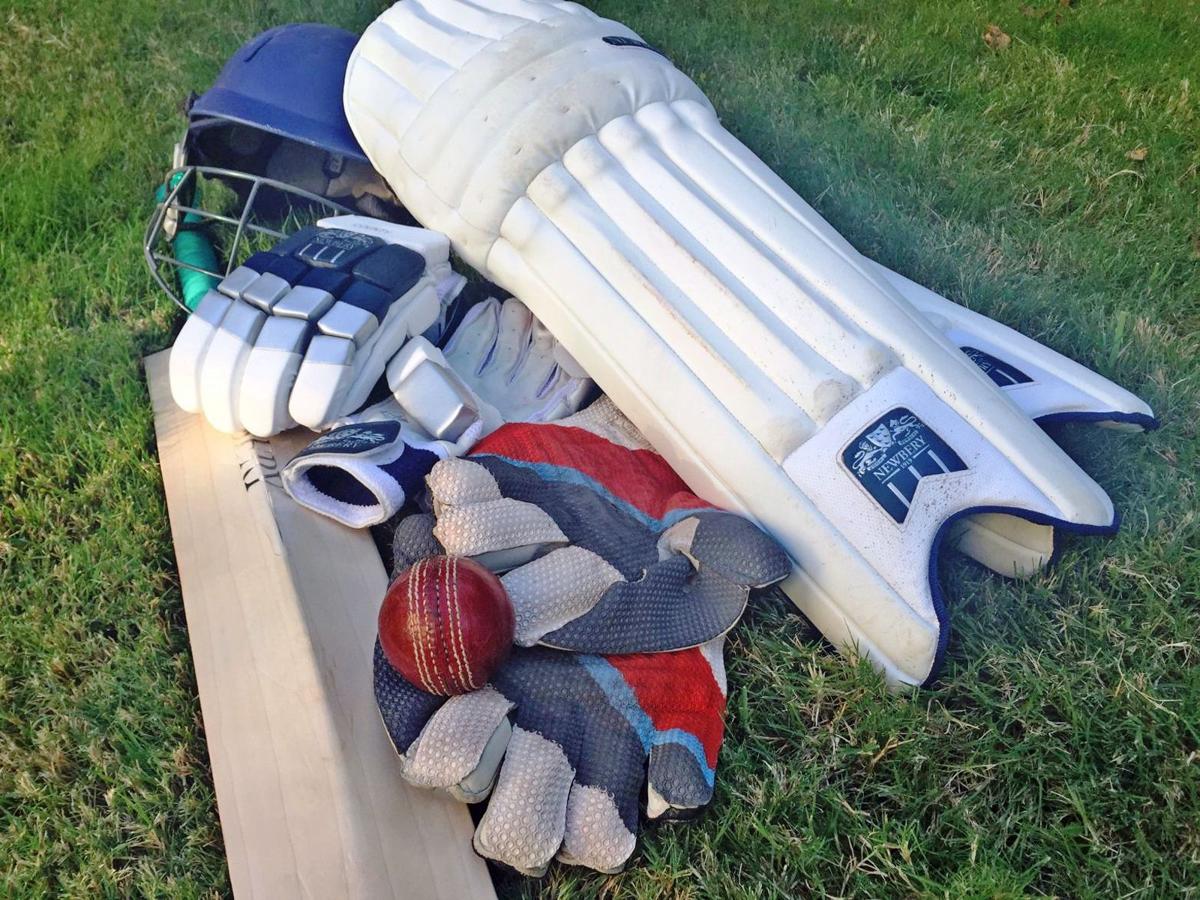 Caen Healy can play cricket better than he can kick it.

The Napa High School football team’s returning kicker, the fourth-leading scorer for last year’s Monticello Empire League champions with 41 points, won’t be around to face the opponent expected to be Napa’s toughest.

When defending Division III state champion Campolindo visits Sept. 18, the senior will be in Indianapolis at the International Cricket Council Combine Sept. 18-21.

“It’s an incredible opportunity for me” said Healy, who has been playing cricket since 2006, “and I’m excited to test my skills in what I’m sure will be a challenging environment. Working with some top-notch coaches will help me to fine-tune my game and give me exposure. With America being such a large country, I wanted to get exposure for my wicket-keeping skills, and this ICC combine will allow me to do just that.”

Only 82 other cricketers from the Americas, Canada to Argentina, have been invited to the tryouts at the 48-acre Indianapolis World Sports Park, which features international standard cricket facilities and can also accommodate Gaelic football and Australian Rules football.

“It is highly likely that Indianapolis will be the future home of the American Cricket Association because they have this large facility, and because it’s kind of in the middle of the country,” said Napa Valley Cricket Club vice president Andrew Healy, Caen’s proud father. “That’s why they chose it for the combine.”

Caen Healy, an Irish-American, is a member of both the Merrion Cricket Club of Dublin, Ireland — where he spends his summers — and the Calistoga-based Napa Valley Cricket Club.

Healy applied online to attend the combine earlier this summer, including a minute-long skills video — viewable at youtu.be/ImGXuTmRlIc — to highlight his wicket-keeping skills.

“At the end of the first segment, there’s a diving catch,” Healy said of the video, which some friends shot. “The rest of just technique and showing what I can do.”

He was one of only four players under age 19 selected, and the second youngest overall.

“I didn’t think I had any chance at all,” he said. “I figured the people who had already played for the Americas, who are older and have played in adult leagues, would beat me out because the selectors had never seen me play.”

Plays one of hardest positions

The 5-foot-8 Healy said wicket keeper is one of the hardest positions in cricket. It is the cricket equivalent of a catcher in baseball — at the heart of the fielding team’s efforts to get the respective batsmen from the batting team out.

“It’s physically taxing because you’re down in squat the entire time. Other players can hang out on the boundary, but you have to be on it every single ball. Even when you get throws in, you can get a bad hop and you have to wear it off your body. Playing a 40- or 50-and-over game, you’re in bits the next day — so sore and so tired. It’s a lot harder than being a kicker.”

Andrew Healy said being at such a specialized position, for seven years now, may have given his son an edge in the combine’s selection process.

“There may be only four, five or six in the Americas who can play at the international level,” he said. “Also, the modern wicket keeper is different from 20 years ago in that you also have to be a good batsman. His batting skills are average, but you can train a batsman more easily than you can train a wicket keeper.”

Born in London, England, Healy holds dual citizenship because of his American-born mother and Irish-born father. He lived in Ireland from 2001 until 2008, when he moved to Napa and attended Alta Heights Elementary School and Silverado Middle School before Napa High.

Last fall for the Napa football team, he converted 29 of 32 extra points and was 4 of 4 on field goals. He said he hopes to break the school record for longest field goal, 45 yards, adding that he recently threated a 47-yarder in practice. He has also played both JV and varsity soccer for the Indians, and JV rugby for the Napa Stormers club team.

Healy represented Northern California in 2009 in a national cricket tournament of sorts in the South Bay. Since then, because of the distance from Napa and commitments to his books and other sports, he hasn’t played much competitive cricket in the Bay Area.

That will all change in the run up to the ICC Combine. Healy will again be part of a NorCal team competing in the Owen Graham U-19 Memorial tournament over Labor Day weekend. This tournament will include teams from Northern and Southern California, along with a team from Texas.

If Healy makes it through the initial weekend of the combine, he will be invited back to Indianapolis the following weekend as part of smaller group for more intensive training.

“That’s a bye week for the football team, so that’s good,” said Healy, who turns 18 on Sept. 26. “I hope to be spending my 18th birthday in Indianapolis.”

Hopes to play in Caribbean

From there, athletes are selected to an ICC America team that will compete in the Caribbean in January 2016.

“That would be an incredible dream come true,” said Healy, who has always dreamed of playing cricket at the highest level. “In the meantime, I just need to buckle down and do the hard work over the next few weeks in the lead up to the combine.”

Inspired by the famous and thrilling Ashes series of 2005 while holidaying in England, Healy first started playing cricket for Merrion Cricket Club in 2006 and has played there every season since.

He travels back to Ireland every summer to spend time with his paternal grandparents, and to play cricket for the club’s U-19’s in addition to the seniors 3rd’s and 4th’s. With Merrion being the largest the cricket club in all of Ireland, there is plenty of opportunity for Healy to play in his favored role of wicket keeper.

Merrion fields eight senior men’s teams, two senior women’s teams, and a number of social teams. The club also has a full youth structure, U-9 through U-19 teams for boys and girls. Some of the most famous players to emerge from Merrion include Irish international players Ed Joyce, who captains Sussex Cricket Club in England; John Anderson; Joyce’s twin sisters, Isobel and Cecelia; and a contemporary of Healy’s, Elena Tice, who in 2011 became the second youngest person in the history of cricket to play internationally while just 13 years and 272 days old.

Healy practices regularly with the Napa Valley Cricket Club at its weekly nets practice. He has played in a number of games for them, including their annual World Series of Cricket, when his schedule has allowed. The local club is generously contributing to Healy’s expenses for the Indianapolis weekend as a gesture of support for the talented local cricketer.

“We are thrilled that a Napa Valley local is getting the opportunity to try out with the best of American cricketers.” said NVCC president Phil Bourke. “As a club, we are very much about the social aspects of cricket, but we will always look to support those who can take the step to a more competitive competition, and we are proud that Caen has earned this opportunity.

“We are excited to support Caen in his endeavors and hope he is the first of many Napa Valley locals to take their cricket to a higher level. I’m sure I join all in the cricket community in Napa Valley in wishing him all the best.”

With the combine less than a month away, Healy said he’s both excited and scared about it — just a week after starting classes.

“I still have to get all my school and football work in, and my cricket stuff so I can be proficient at that for my opportunity,” he said.

Healy’s career plans are not to be a professional wicker keeper, however.

“I want to be a lawyer,” he said. “I was interning at the stock exchange in London this summer in the law department. It reassured me and helped me decide what type of law I want to do, competition and anti-trust law.”

Visit www.caenhealy.com for more about Healy.

Napa High School senior Caen Healy poses holds his cricket bat with one of the gloves he uses as a wicket keeper for the Merrion Cricket Club of Dublin, Ireland and the Calistoga-based Napa Valley Cricket Club.