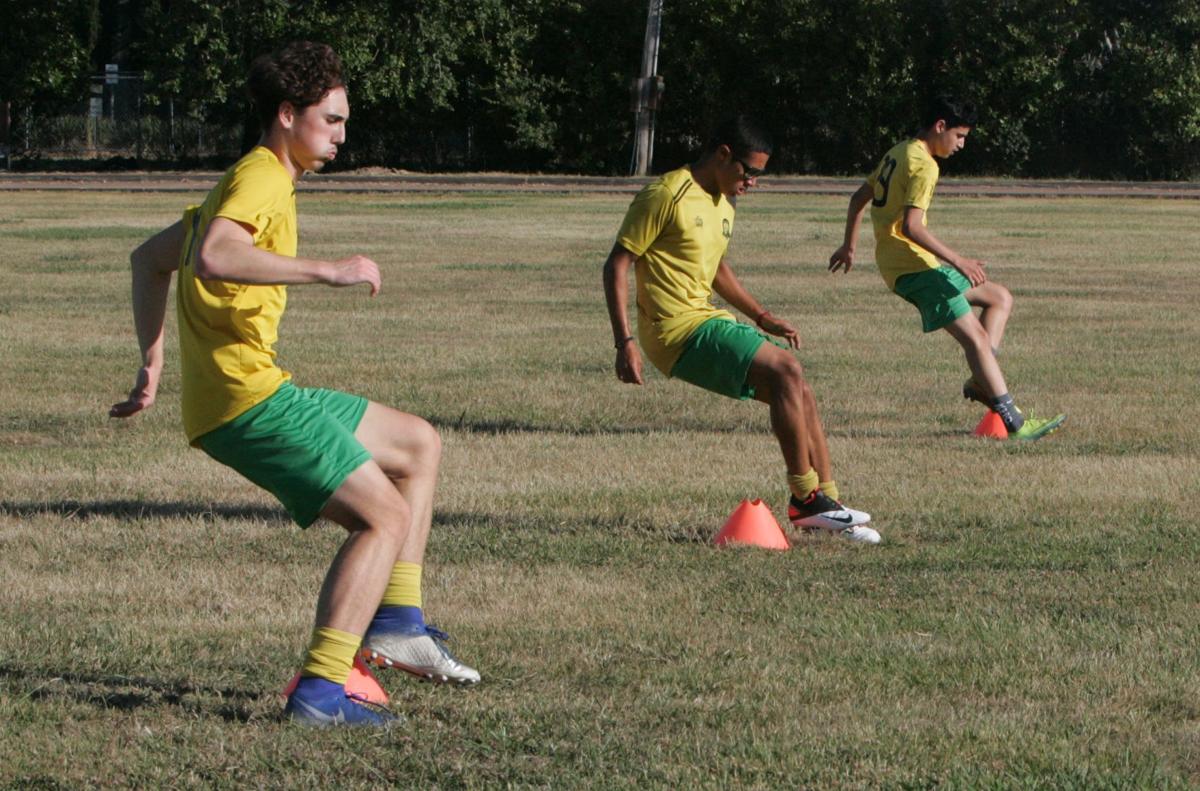 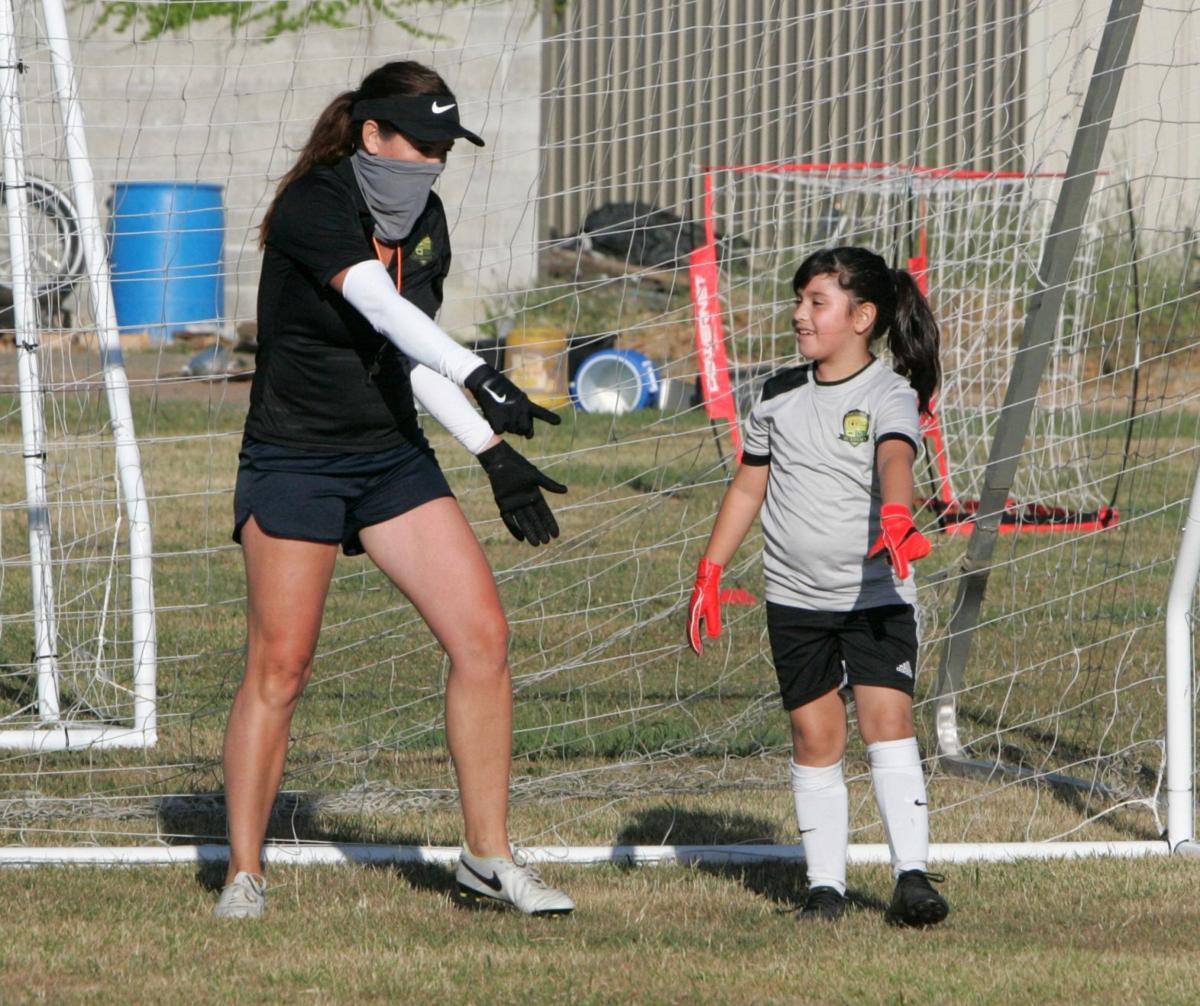 Napa Soccer Academy coach Belinda Halloran and the goalkeeper of her 2011 girls team each make a point during Wednesday's workout at Napa Christian. 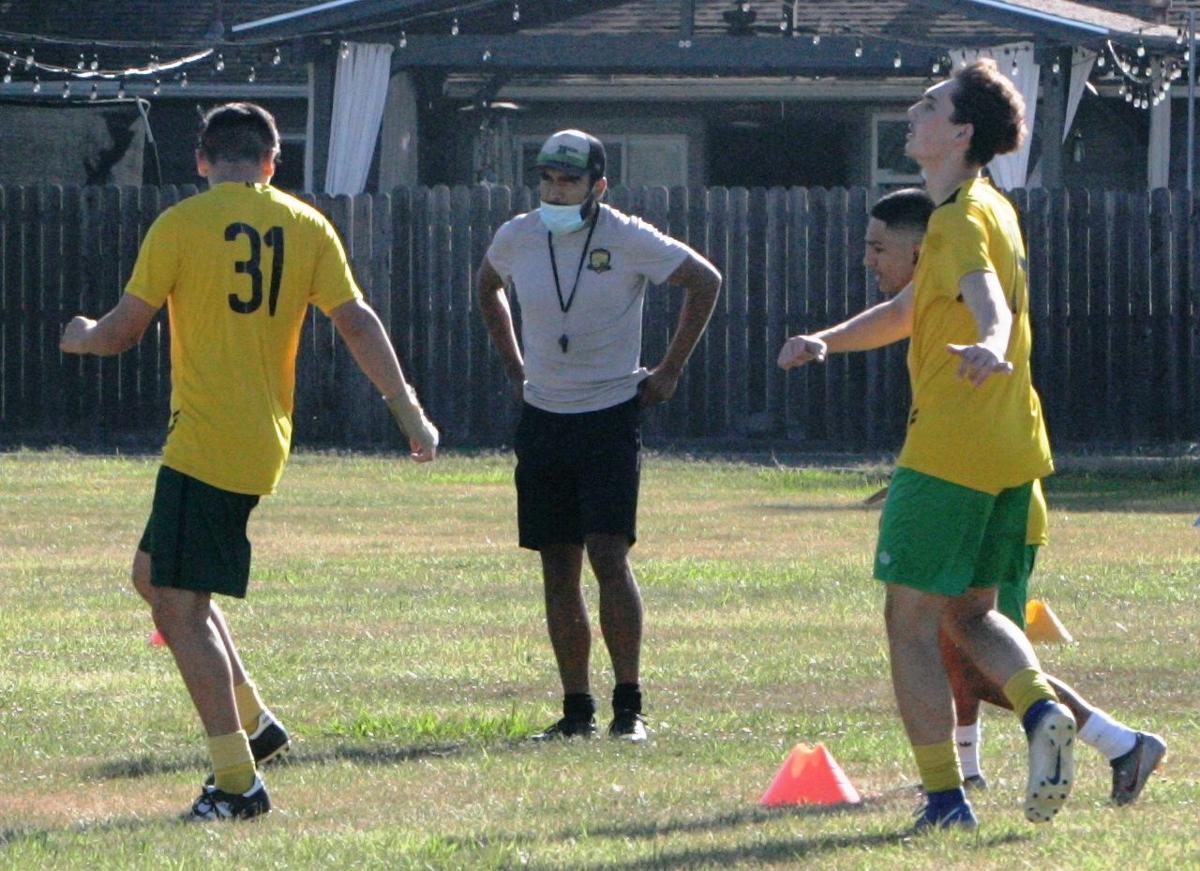 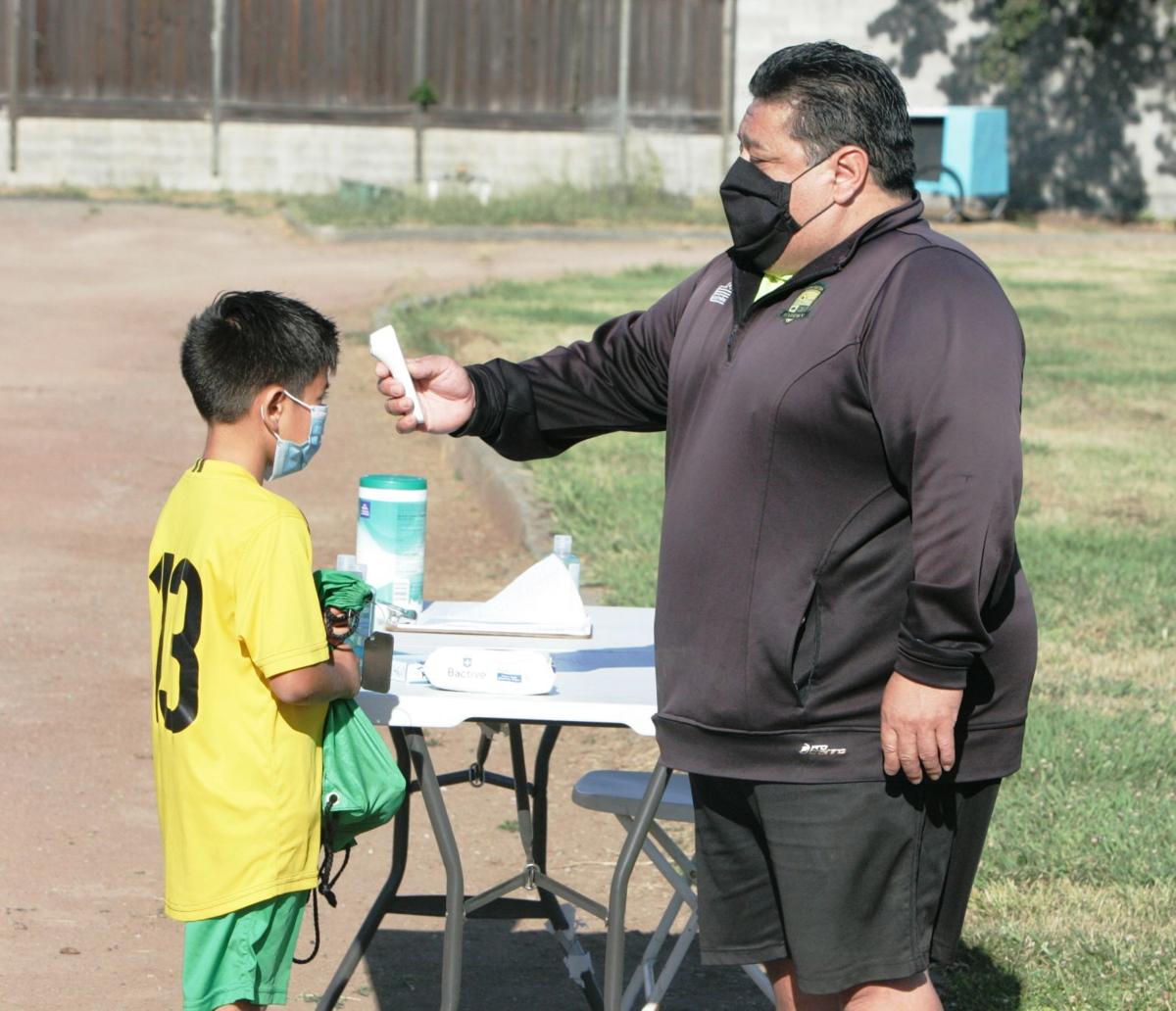 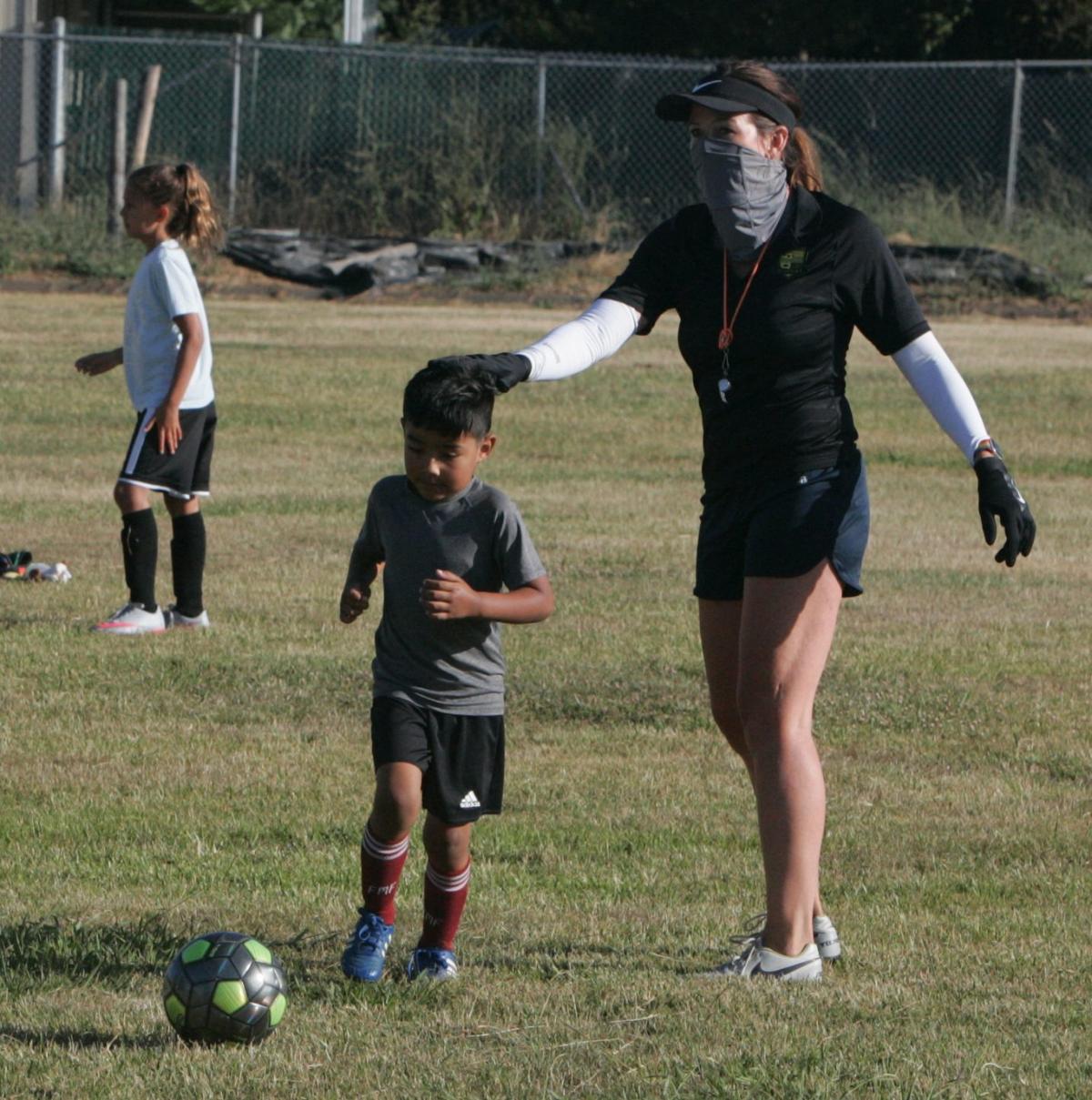 Napa Soccer Academy coach Belinda Halloran gives a player from the youngest boys division a good-job pat on the head during Wednesday's workout at Napa Christian. 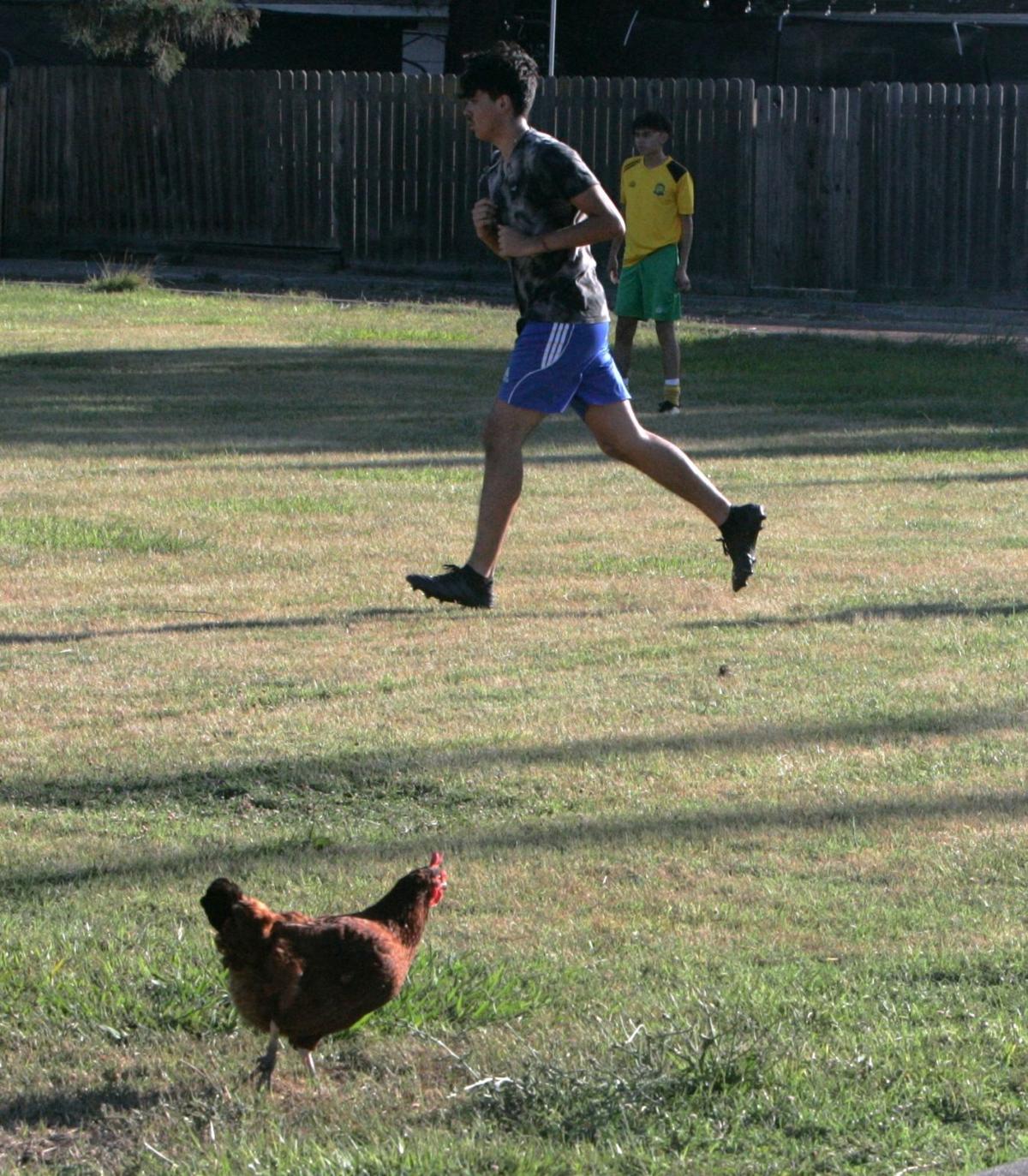 A turkey residing at Napa Christian emerges from fowl territory for a closer look at Wednesday's Napa Soccer Academy workout. 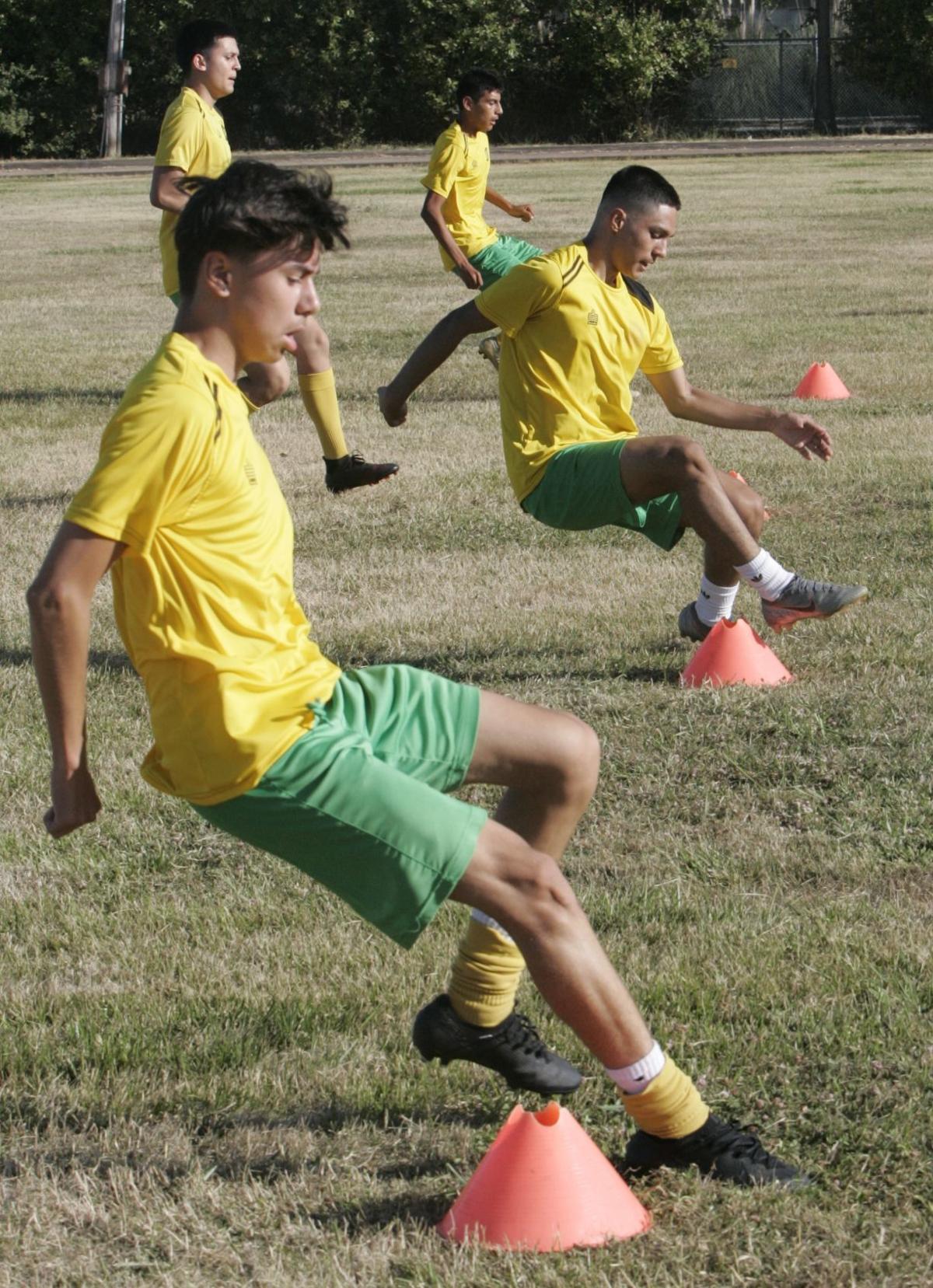 It was cool with a brisk breeze early Wednesday evening at the Napa Christian Campus of Education soccer pitch. If not for her shorts, Belinda Halloran looked like she was ready to shovel some snow.

Coaching the Napa Soccer Academy’s youngest girls and boys, ages 7 and 8, she wore not only the facemask required of anybody being around non-family members during the COVID-19 pandemic, but also a long sleeved jersey, cap and gloves.

It was the second week of workouts for the club, whose oldest team of 17- and 18-year-old boys coached by George Martinez was training at the west end of the field Wednesday.

artinez stayed several yards away from his 2002 and 2003 players while showing them how to do complex drills that they quickly performed, their years of experience showing.

Over at the east end, coach Jimmy Aguirre — who had also been tasked with taking players’ temperatures and asking how they were feeling as they arrived — practiced social distancing while helping Halloran with the young group of 2011 girls and 2012 and 2013 boys.

At one point, Halloran patted a young boy on the head with a gloved hand while telling him he did a good job. She said she embraced some of them when they arrived.

“One thing I made a priority today was to wear gloves and be completely covered up because the little ones hadn’t seen me for a while, and what they wanted more than anything was a hug,” she said. “They said that was really important, so I wanted to make sure that I could give that to them.

“Coaches can often be seen as an extension of family or a role model or a figure that they turn to, so just to be able to comfort them really makes my day. I’m completely covered up and I can at least give them a hug and they can know that they’re back with Coach and it’s safe, just to comfort them. I think it’s been really very stressful for a lot of them.”

Halloran, the director for the NSA’s girls program, doesn’t think any other NSA coaches have given hugs.

“I don’t think they have because none of them want to take that risk, and it’s not advisable because they’re not wearing gloves,” she said. “I don’t do it very often, but I wanted to do it because it was the first time the girls had seen me in a while and they wanted to high-five and touch me. I didn’t want to say ‘No, you can’t’ because that seems almost cruel, like suddenly ‘OK, I’m back, but no, you can’t give me a high-five.’”

Martinez’s team is all current or former Vintage and Napa High players with exceptions of one from American Canyon and another from Armijo.

Martinez, a 2009 Vintage graduate who was named All-Napa County Defensive Player of the Year after his senior season in the fall of 2008, used to coach the 2004-05 Napa Soccer Academy team and is now the NSA’s director of operations.

“George’s role is to ensure all the fields are set up correctly and that we get the right fields when play starts happening again, and he coordinates between all the teams and the coaches,” Halloran said.

“I’m trying to give back to the community as much as I can,” said Martinez, a graduate of the University of San Francisco. “It’s been different this year, obviously, because we’ve had to adapt to all the guidelines and everything. But it’s worked out well, because all the coaches are on the same page. We try to have a Monday meeting where we brainstorm and talk about how the week went, what we can do better, things like that. So we have a good support system with each other.”

Martinez not only didn’t hug players, but he split them up into two groups that competed against each other in the drills — and made the losing team do 10 push-ups.

“They’re at an age where they want to compete with each other, so I have them shoot for a goal so they push each other,” he said.

Martinez said the club welcomes new players to try out until July 20, when US Club Soccer is expected to announce whether there will be a fall season or not.

“If we do, then we’ll start doing friendlies (scrimmages) and play in tournaments to get ready for the fall season, which usually starts in mid-August,” he said. “But right now, everything’s up in the air.”

Halloran coaches the ’02 and ’03 girls teams on Tuesday and Thursday nights. Before the season was halted to curb the community spread of coronavirus in mid-March, the NSA was looking to have an ’04-’05 girls team as well, Halloran said.

“Our club was looking fantastic before COVID hit and, to be honest, every soccer club in America has struggled during this time,” she said. “But the fact that our players are actually interested in coming back and that I had 100% retention from my older girls team is great.

“To be honest, my No. 1 priority right now, because COVID’s not over, is just making their mental health the No. 1 priority – just keeping them happy and healthy, because it’s such a weird and stressful time for them. The coaches that we have here are awesome. They’re not being paid right now because we’re not charging our players until we know if there is going to be a season. Until we have a season we don’t really have much of a plan other than train within the guidelines and keep the players happy and healthy and back outside with their peers.”

Until now, it was video conferencing for soccer — on top of the same for school.

“Seeing them on the Zoom calls every week for the last three months was really depressing,” Halloran said. “I was watching my players just slowly decline in how they were being positive. It was very isolating for them. So just to even have a little bit of social interaction has been super positive and so important. It’s better than like trying to teach soccer on Zoom, let me tell you.

“When we get to the next phase (of lessened restrictions), we will be able to have small-group interaction, but we’re not there yet. So everything that the club does is just following county guidelines. We’re just really lucky that we have the use of a private facility because if we were using public school facilities, we wouldn’t have access to a field right now. So it’s been a blessing to have Napa Christian’s help.”

Halloran was asked if it took a day or two for her players to get the adrenaline going and start thinking soccer, soccer, soccer again.

If they do play this year, it will likely be without fans.

“It’s a really tough because the kids love to play for their parents and their parents love to watch them play, of course, so that’s a real tough,” Halloran said. “It’ll be a club decision. Safety has to come first before anything, so we have to put all our own needs and wants on hold.”

At least the coaches don’t have to explain restrictions to the players, who have seen it all on TV for months.

“What we’ve tried to do is try to remind all the kids that when everybody in the world is going through this, and they see their favorite soccer stars doing training at home, that this is a worldwide problem. So we really have to take it seriously and be responsible and follow the guidelines, not just for ourselves in our own club but for the greater community.

“I think the kids, even though it’s such a massive concept to grab, know this situation is serious because it’s affecting their parents’ jobs, killing people and forcing their schools to close down. It’s amazing how much they have been able to handle. I’ve been astonished and just super proud of them. Our No. 1 priority is emotional health because we underestimate how stressful the situation’s been, particularly for young people. To lose their friendship groups and have that isolation is massive, and sport is very much an extension of that of their family.

“It really puts in place the fundamentals of coaching, which is why we coach in the first place — just to take care of the kids, to really make them feel good about themselves and to make them feel happy.”

Four members of the Sac-Joaquin Section champion Vintage High football team of 1986 look back at the memorable season.

Ali Thomas, a former prep star at St. Ignatius and 1000-point scorer at USF, will be Napa High's new head coach pending approval from the school district later this month.

Robert Exum of Napa set two World Association of Benchers and Dead Lifters world records at the WABDL State Championships on Sunday in Chico, and other announcements.

Coach Jon Gruden says there is a different vibe this year during training camp and his Las Vegas Raiders are embracing it at the team’s new 335,000-square-foot, $75 million practice facility south of the Vegas Strip

Napa Valley Up & Comers: Bollinger, Hoang and Muhammad must wait

The Athletics' ninth straight win was far overshadowed by what erupted in the seventh inning at the Coliseum.

Napa Soccer Academy coach Belinda Halloran and the goalkeeper of her 2011 girls team each make a point during Wednesday's workout at Napa Christian.

Napa Soccer Academy coach Belinda Halloran gives a player from the youngest boys division a good-job pat on the head during Wednesday's workout at Napa Christian.

A turkey residing at Napa Christian emerges from fowl territory for a closer look at Wednesday's Napa Soccer Academy workout.