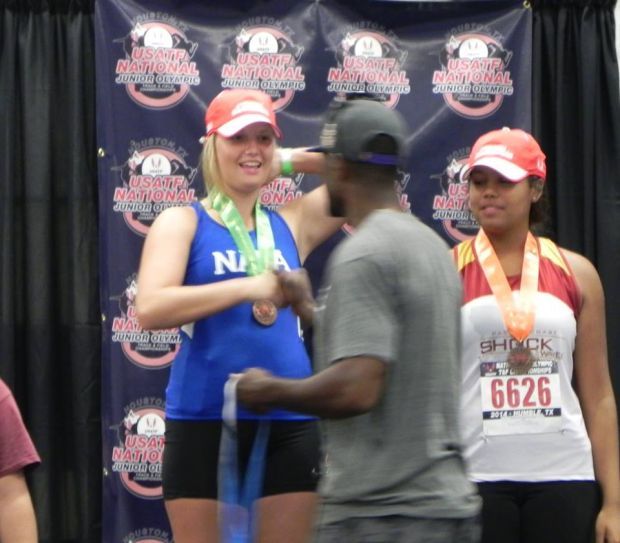 Austin Steed’s medal came in the 15-16 girls hammer throw. She extended her club record out to 118-9 en route to a fifth-place finish. 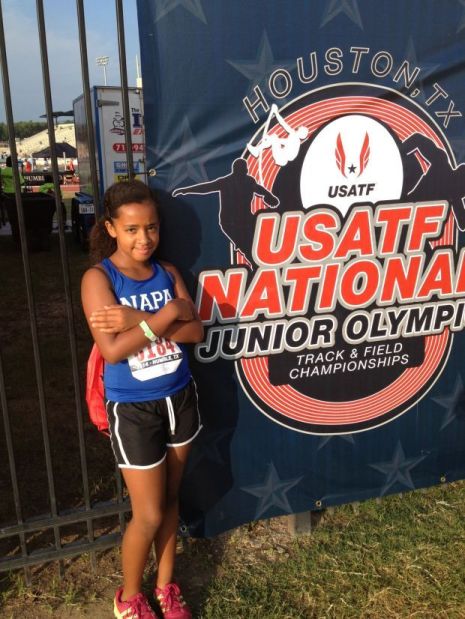 Junior Olympic medals are tough to come by.

Each year, approximately 70,000 young athletes start the process at local and regional competitions, and about 6,000 survive the qualifying rounds and advance to the national championship meet.

That’s where things really get tough. Each event usually draws 40-50 of the top athletes from across the country.

Those competitors then battle it out, with a finish in the top eight earning a place on the medal stand and the right to be called an All-American.

Over the previous 19 years, only nine athletes from the Napa Track Club have been able to earn a spot on the Jr. Olympics awards podium.

This year they were able to add three new names to that list, as Sophia Tinnon, Liam Wallace-Harper, and Austin Steed all earned this terrific honor.

The trio all had standout seasons in 2014. Each of them reached the national meet by setting the club’s all-time record in their respective events in regional qualifying.

They had definitely shown that they had the physical talent required to contend for a spot on the national podium.

But it takes a lot more than that to perform well at the Jr. Olympics, according to NTC coach Tony Giovannoni.

“Everything’s bigger … the venue, the crowds, the number of people you’re competing against. It’s definitely going to stir up the butterflies,” said Giovannoni.

The meet features seven full days of competition. This year it was held at Humble High School on the outskirts of Houston, Texas.

While the big spotlight can cause some initial jitters, Giovannoni has learned that the hardest part about competing in these national meets comes down to travel and weather.

“We’re almost always traveling east a few time zones. This year both Liam and Austin had 8 a.m. start times, so they were probably up by 6, which felt like 4 to them,” said Giovannoni.

“We had a few early morning practices to try to help, but it’s a big challenge to be super-sharp when your body thinks it should be asleep.

“But by far the biggest obstacle athletes from our area face is the humidity, and there was no shortage of that in sweltering south Texas,” he added.

This year, the Napa Track Club had a total of 17 athletes advance through regional competition and qualify to go on to the national meet. Nine decided to take the trip and compete in Texas.

Steed’s medal came in the 15-16 girls hammer throw. She extended her club record out to 118-9 en route to a fifth-place finish. She was also the Region 14 champion in the event.

Wallace-Harper’s stellar season came to a close with a fifth-place medal in the 9-10 boys high jump. Wallace-Harper owns the club record of 4-4 ¼, and was the Region 14 champion in the event in both 2013 and 2014.

Three other athletes each competed in a pair of events. Solomon Tinnon (14-15 boys) was 18th in the pentathlon and 27th in the high jump.

The Jr. Olympic meet was the final meet of the season for Napa Track Club. Tryouts for the 2015 season will take place next spring.

Who has the edge in the NL Wildcard race?

Austin Steed’s medal came in the 15-16 girls hammer throw. She extended her club record out to 118-9 en route to a fifth-place finish.