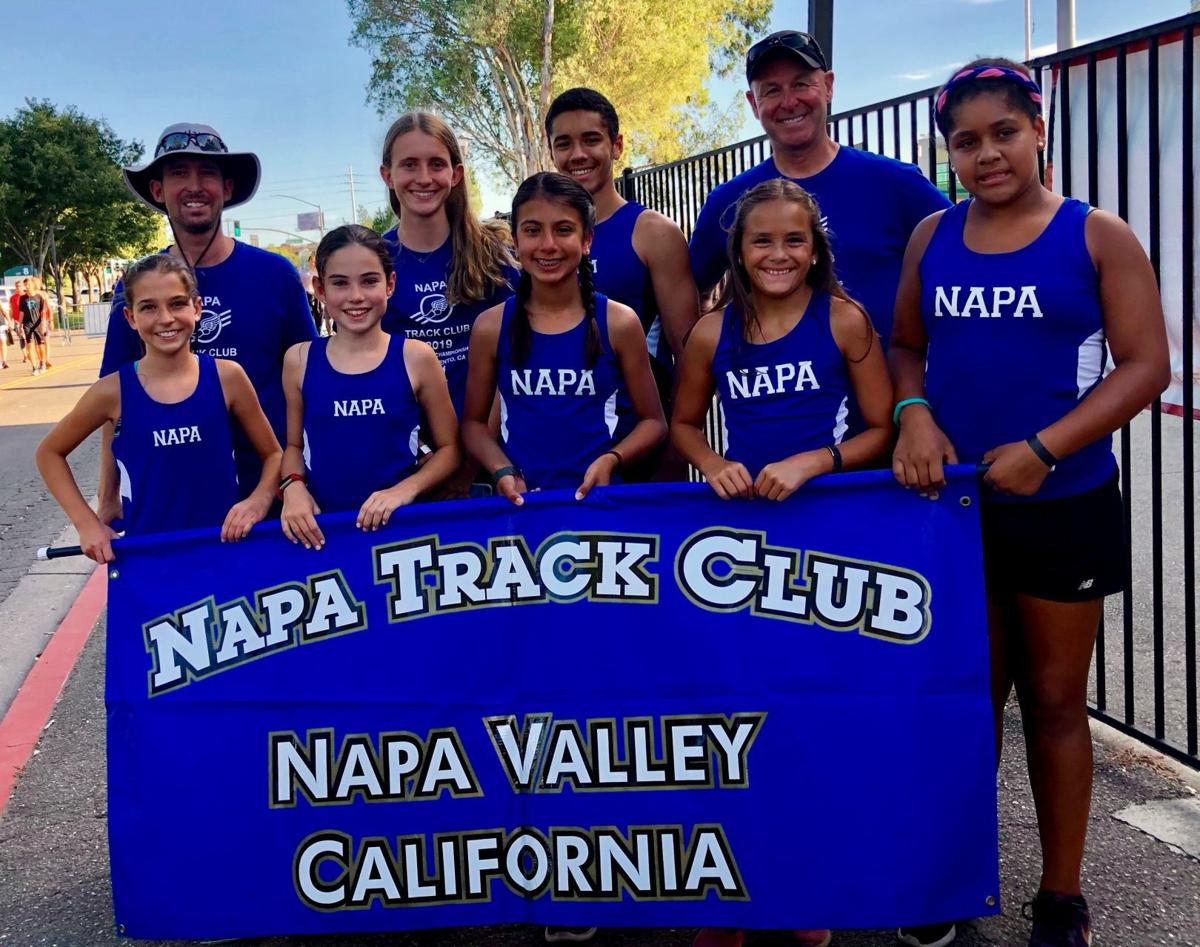 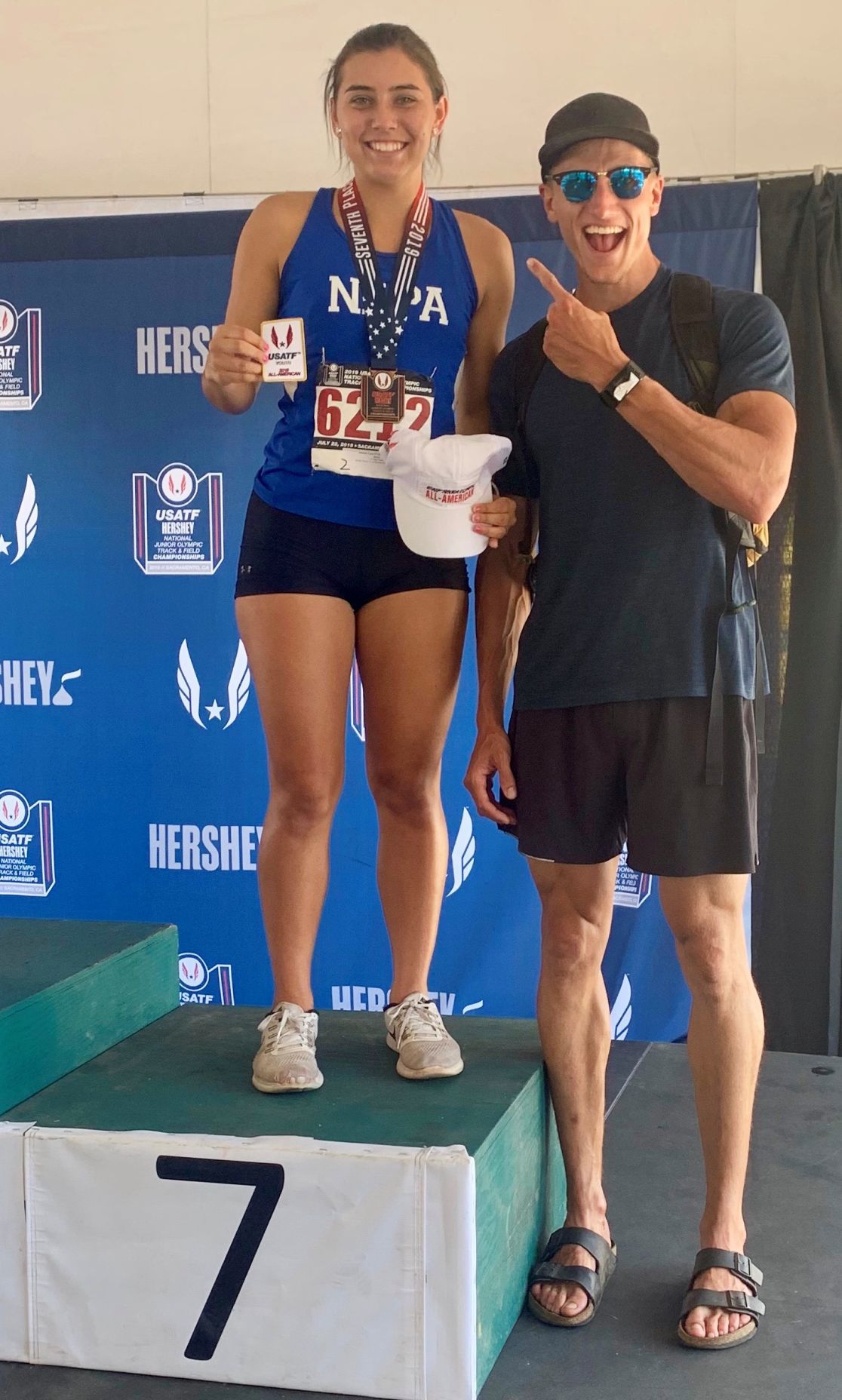 Carly Johnson poses on the podium next to Napa Track Club coach Matt DeFina after placing seventh in the 17-18 women's javelin and breaking a club record in the javelin throw. 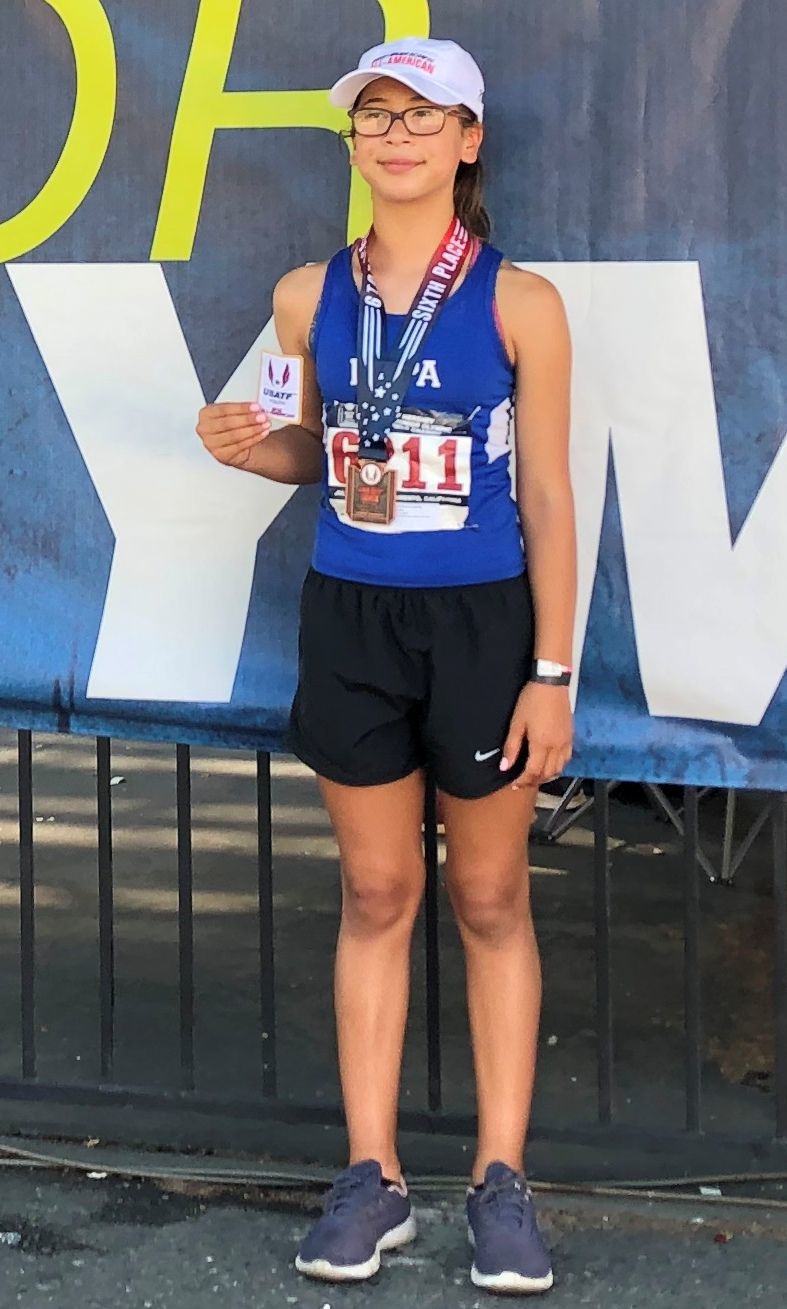 Josephine Diaz made her Junior Olympic debut by capturing sixth place in the 9-10 girls 1500-meter race walk for the Napa Track Club.

USA Track and Field Junior Olympics medals are tough to come by. Each year, thousands of young athletes compete at local and regional meets to qualify for the Junior Olympic Nationals.

This year, more than 7,000 athletes survived the qualifying rounds and advanced to the national championship meet held July 22-28 at Sacramento State University, and the Napa Track Club had 12 athletes qualify in 15 different events.

Over the previous 24 years, only 14 athletes from the NTC have been able to earn a spots on the Junior Olympics awards podium and have the honor of being named All-Americans. The NTC added two new athletes to that list this year.

On the first day of competition, Josephine Diaz made her Junior Olympic debut by capturing sixth place in the 9-10 girls 1500-meter race walk.

Also on the first day of competition was the 11-12 girls 1500-meter race walk, where Adela Regalado-Zachold placed 11th and Lucy Morris finished 15th.

Sophia Tinnon qualified in the shot put, javelin and discus for the big meet. Her best event was the javelin throw, where she recorded a personal best of 105 feet for a 12th-place finish.

Also competing in three events was Liam Wallace-Harper, in the high jump, triple jump and 110-meter hurdles. His best event was the high jump, where he recorded a lifetime best of 5 feet, 10.75 inches and placed 11th, just missing the podium because of misses at lower heights.

Carly Johnson competed in the 17-18 women’s javelin and picked the right time to throw a personal best of 121 feet. She earned the seventh spot on the podium and broke the NTC record in the event.

Sadie Tinnon in the discus in the 11-12 girls division, while Gracie Defina competed in the javelin and teamed with Blake Wilsey, Hailey Schuemann and Adela Regalado-Zachlod in the 4x400 relay.

Mia Oggenfuss competed in her third National Junior Olympics, in the 17-18 women’s high jump, and Casey Potrebic competed in the 15-16 boys shot put.

The Junior Olympics were the final meet of the season for the NTC. Tryouts for the 2020 season will take place in the spring.

Caen Healy and Drake Holman will honor one of their fellow 2016 Napa High graduates, Peter Stoppello, by hosting "Peter's Golf Day" on Saturda…

The Vintage High boys soccer program said goodbye to 14 seniors after finishing first in league play for the fifth season in a row.

The SportsVine, a local sports radio talk show that airs from 9 to 10 a.m. Saturdays on KVON 1440 AM, is scheduled to have Denise Horn and her…

Carly Johnson poses on the podium next to Napa Track Club coach Matt DeFina after placing seventh in the 17-18 women's javelin and breaking a club record in the javelin throw.

Josephine Diaz made her Junior Olympic debut by capturing sixth place in the 9-10 girls 1500-meter race walk for the Napa Track Club.