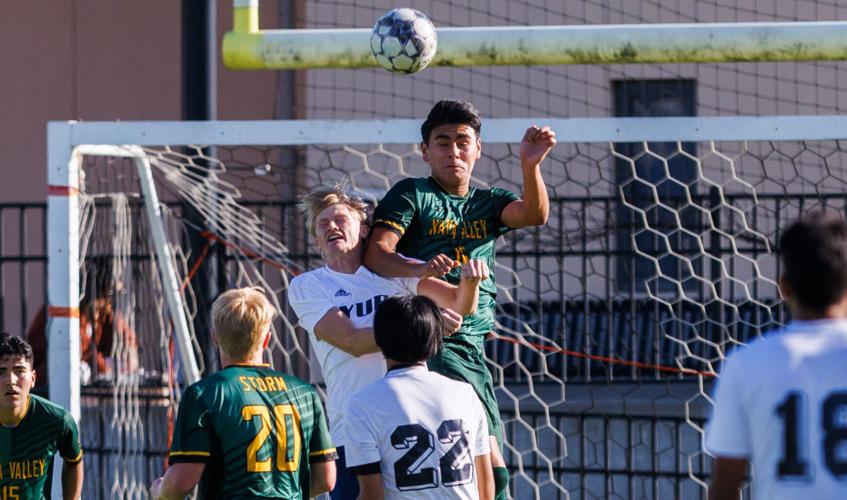 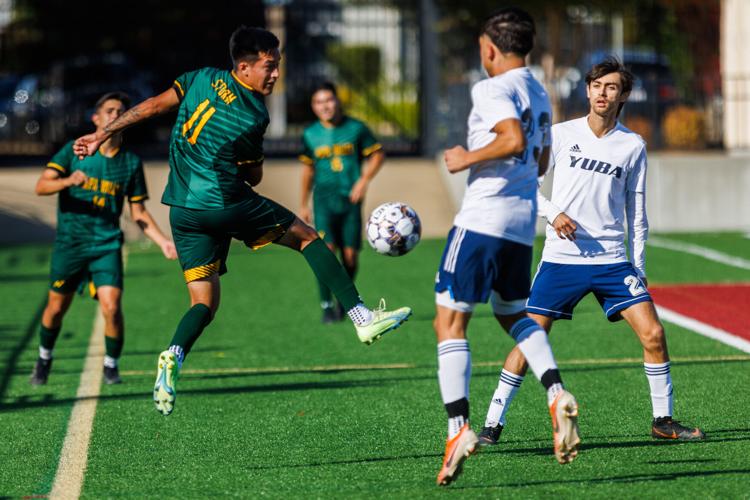 Napa Valley College forward Angelo Dominguez (11) battles for the ball during NVC’s match against Yuba at Memorial Stadium in Napa on Thursday. 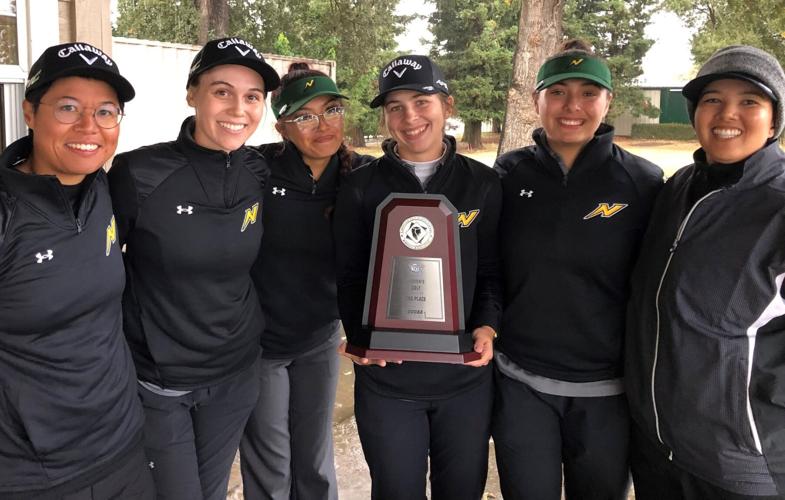 It looked on paper that the Napa Valley College men’s soccer team’s preseason was a terrible experience.

The Storm went 0-6-1 against those first seven non-Bay Valley Conference opponents, getting outscored 28-5 to start the season.

But NVC head coach Rogelio Ochoa reminded his players that the preseason is a time to get as much experience as possible against tough teams, however terrible or terrific the scores might be.

Napa Valley turned its season completely around once BVC play started, going on a 10-game unbeaten streak that included two more non-conference games that they won and tied.

“The team learned, adapted and developed as the season went on. This showed when the team went undefeated in October, including two non-conference matches vs opponents that are currently in the playoffs as well. It’s because of these tough matches at the beginning that we were able to do well in our conference and hopefully continue the momentum into the playoffs.”

Napa Valley (7-8-4) paid a price for its winless preseason, getting seeded just No. 23 in the 24-team Northern California Regional Playoffs. The Storm will travel to San Jose early on Wednesday for an 11 a.m. opener against No. 10 seed Evergreen Valley.

In the second half of their 10-match NVC schedule, the Storm beat the Marin and Merritt teams they had tied in the first round, taking a 6-0-2 BVC record into their last two conference games./

With its fifth consecutive BVC title already clinched, NVC went coastal in a 2-1 loss at third-place Mendocino and seemed to have limped into the postseason with a 5-1 loss to fourth-place Yuba on Sophomore Day at Napa Memorial Stadium.

Nobody was limping, actually.

“The team had already clinched the conference title and a playoff berth, so we rested some players to be ready for playoffs,” Ochoa explained. “But credit to the opponents that beat us the last two matches.

“The team won the matches that mattered the most and scored goals in clutch moments throughout the conference schedule. We know our style of play and know our strengths as a team and will be leaning on those for tomorrow’s match. The team knows that with a win tomorrow, no one will remember the last two defeats in conference play.”

Ochoa was named NVC Coach of the Year.

Of the 21 players on the NVC roster, 15 are from Napa High or Vintage High.

“It’s nice having local players from our community representing the team. At the end of the day this program, Napa Valley College Men’s Soccer, and school, NVC, is for them,” Ochoa said. “Our goal is to have them take advantage of all the resources offered here so they fulfill their dreams academically and athletically. We have players from Napa and Solano counties who represent our school very well.”

The Storm finished fifth at the 2022 California Community College Athletic Association State Championships on Sunday and Monday at Morro Bay Golf Course after qualifying with a third-place finish at the CCCAA Northern California Regional Championships at Dragonfly Golf Club in Madera on Nov. 8.

The top four teams and top six individuals not on those teams earned trips to Morro Bay, where in October the Storm placed fifth in the two-day North/South Invitational behind Alexis Larsen’s second-place finish.

"We had a couple of good rounds down there in October," Storm head coach Bob Freschi said on the team’s webpage at nvcstorm.com. "You never know what could happen and who gets hot and how the team goes. Just to be in the top eight teams in California is quite an achievement. We're very, very capable. Obviously, you've got to play really good golf and your scores have got to be really good. We're going to try like heck to have low scores."

Rain and wind made playing golf seem more like work on Nov. 8, but the Storm actually improved its first-day score of 334 by four strokes to finish with a 664.

"We were better than we were yesterday, in worse conditions," Freschi said at nvcstorm.com. "It was windier and rained hard at times. It would let up and then it would come down hard again, off again, on again. They just handled themselves so well. They were calm and relaxed (Tuesday) morning."

The Storm also finished in third place in the Big 8 Conference standings.

Freschi told nvcstorm.com that he challenged his players to go lower on Nov. 8.

"They all looked me in the eye and said ‘yes.’ I go, 'Well, let's make it happen. Rain, shine, wind, no wind, let's make it happen,’ and they did it,” he said. “They were so happy and proud with their performance, to be in the top third and just so fired up and happy and excited, third in Northern California.

“What they went through and dealt with, it's very difficult to do, and we did it. I'm just so proud of them. It's very rewarding to see a golfer execute the game plan and be better than they were the day before."

It was the first time the program had an entire team qualify for the state tournament, not just individuals.

"We have a saying, 'That's how the Storm rolls. Thunder rolls and lightning strikes,' and that was us," said Freschi at nvcstorm.com. "We do our thing.

"We had a game plan, what we had to accomplish and very proud of the ladies. It was a grind. They're physically and mentally exhausted right now. What they just experienced and went through is just a lifetime memory. It was neat for me to watch them experience the states. To finish in the top-five, that's pretty awesome," said Freschi, who is in his seventh year as the Storm coach.

NVC was led by its sophomores, Larsen, Kearney and Pervez.

"Those are our veterans. They led us all year," said Freschi on the website. "It was great to see their improvement, their development these last three years.

"I told them after their round today, to see their development the last three years and what they've accomplished, it's incredible. It's an amazing job that those ladies have done, to get themselves to compete in a state championship. It's a difficult thing to do. Playing golf is difficult, battling the nerves and battling anxiety and battling everything that comes with it.

"We talked about it. We focus on what we do, how to control it, and embrace that feeling of being here."

The individual medalist was Motoka Shimoji of Canyons, who shot 76-78 – 154, and won the title by a tiebreaker.

Modesto was in fifth place after Round 1, trailing first-place Canyons by a 19-shot margin.

"That was great comeback by Modesto. They've been doing that all season," said Freschi on the website.

Morro Bay, set up as a par-72, 5,308-yard layout, played very difficult due to the green complexes and pin placements, said Freschi.

"It was a real challenge for every state golfer participant. They firmed up the greens and they made the rough longer for the state championship," said Freschi at nvcstorm.com.

Temperatures were in the high 50s at the start of the final round.

"We knew going into it, putting. That's all we talked about. It was hard to stop the ball. We did our best," said Freschi.

"It was just so awesome to come in the top five," said Freschi on the website. "I'm very proud of them, to grind it out. Very respectable scores for our team scores. They earned it. They deserve it. To be in top-five in the state is pretty incredible. I'm just so happy and proud for them. What these ladies have experienced through our season, they're better people because of what they just went through."

Napa Valley shot a two-day 693-team score at state, shooting 346 in Sunday's first round and 347 in Monday's second and final round.

"There were lots of fans. It was awesome, to see that much support for our state championship," said Freschi. "With that many people around, it just brings more excitement. I'm like, 'Hey, do what we do.' And we did.

1959: Connie Dierking fouls out of game in first quarter

During the season opener for the 2022 NBA Champion Golden State Warriors, Kimberly Melgoza and Maddie DeLong experienced the championship bann…

The North Coast Section has named Maika Watanabe, head coach of the Vintage High School wrestling program, as it 2021-22 Coach of the Year.

Askari Adams, head coach of the Napa High football program the last three seasons and defensive coordinator since 2019, parted ways with the program on Nov. 16 after posting a 5-20 record at the helm.

Deshaun Watson returns from ban with some support, many boos

Deshaun Watson signed autographs for Texans and Browns fans and posed for selfies before his first game in 700 days in a familiar place. Once the game started, it was overwhelming boos for Watson.

SANTA CLARA — When Kyle Shanahan got his first job as an NFL position coach, Mike McDaniel was right there as his assistant.

The American Canyon High boys basketball team defeated El Cerrito on the road Wednesday night by a score of 65-33, one night after surging pas…

People can't get over Jude Bellingham’s performance against Senegal

People can't get over Jude Bellingham’s performance against Senegal

RAW: WORLD CUP: AMERICAN FANS IN QATAR REACT TO THE NETHERLANDS VICTORY OVER US

RAW: WORLD CUP: AMERICAN FANS IN QATAR REACT TO THE NETHERLANDS VICTORY OVER US

Behind the Scenes - At the World Cup media hub

Behind the Scenes - At the World Cup media hub

Napa Valley College forward Angelo Dominguez (11) battles for the ball during NVC’s match against Yuba at Memorial Stadium in Napa on Thursday.