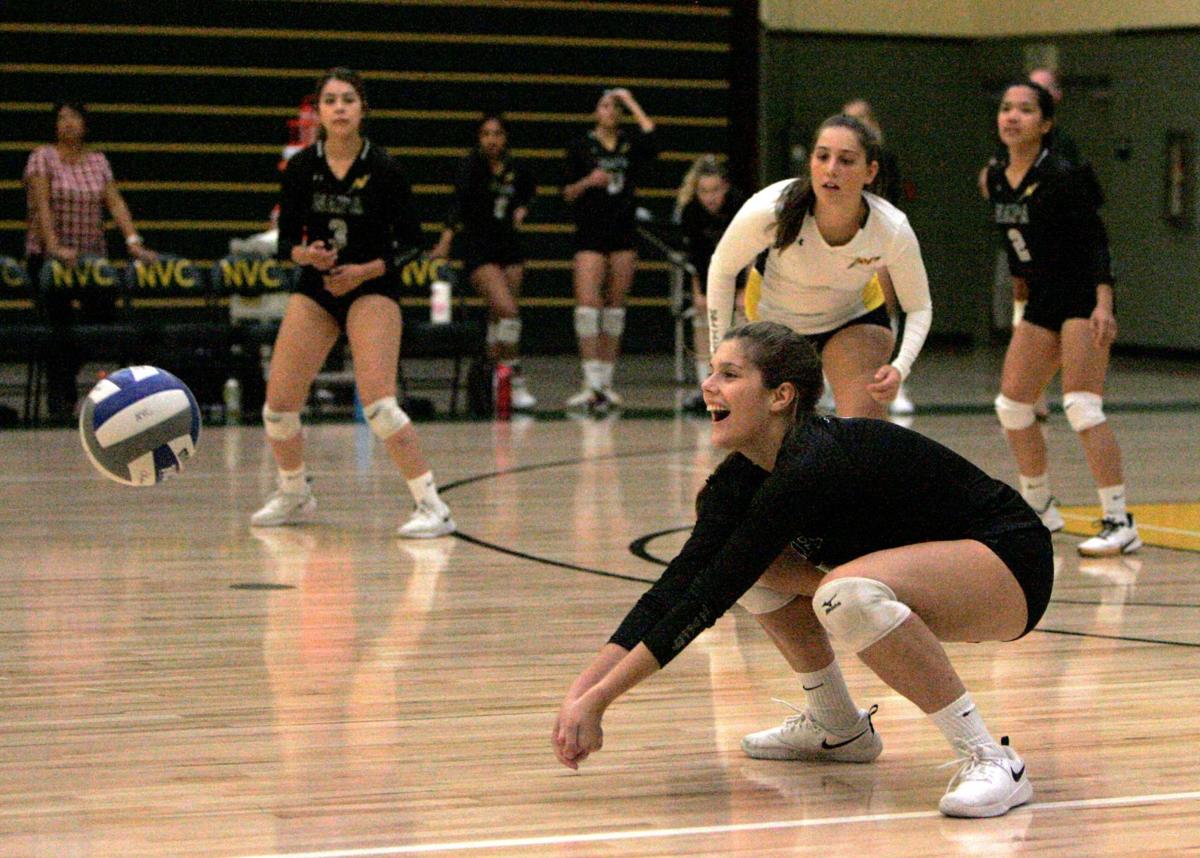 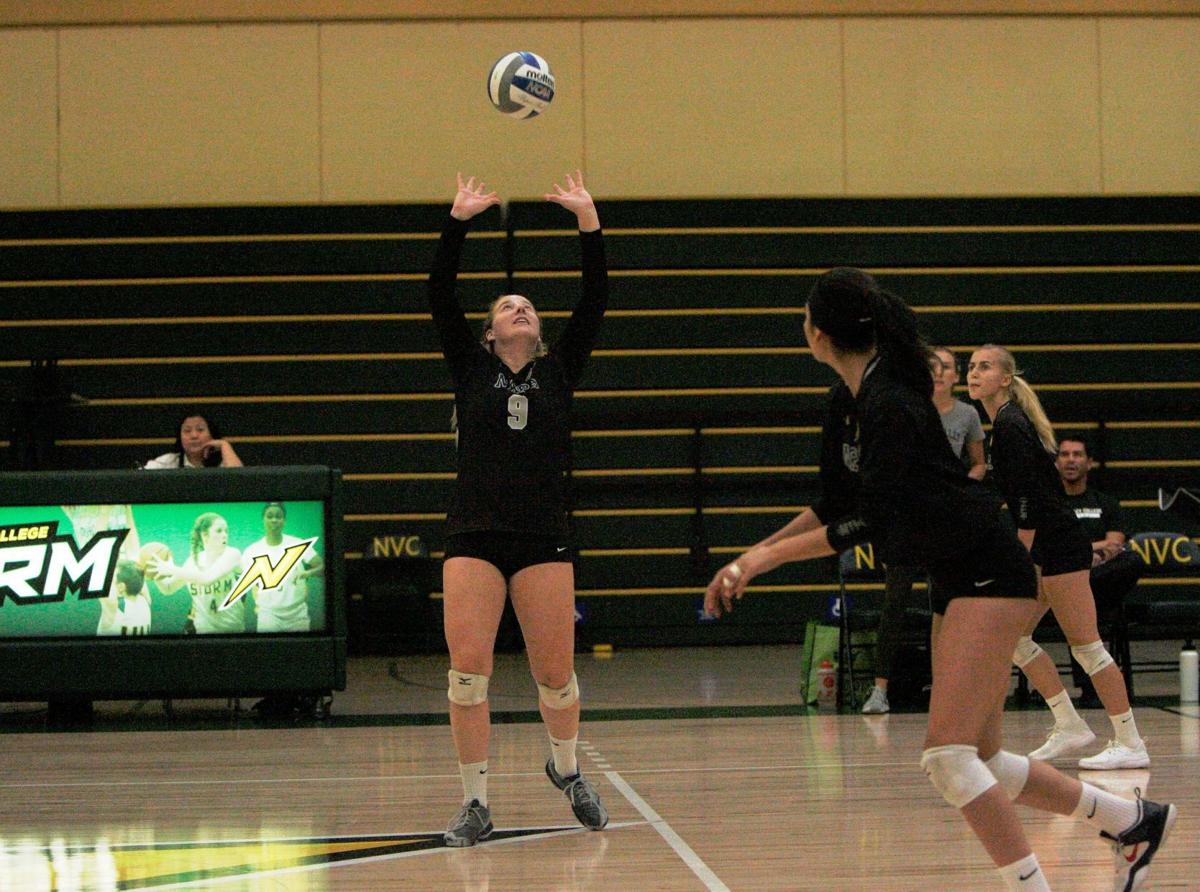 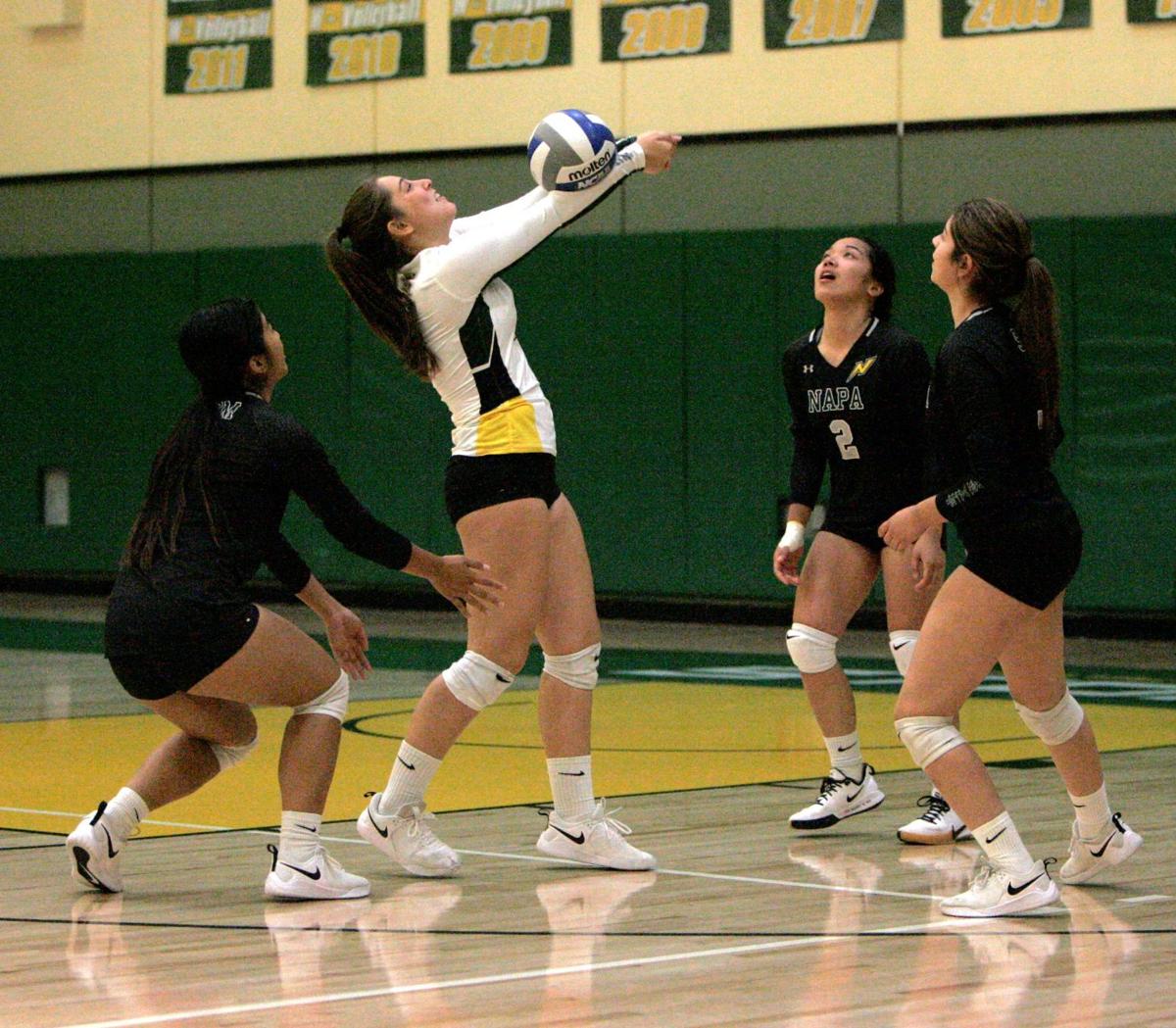 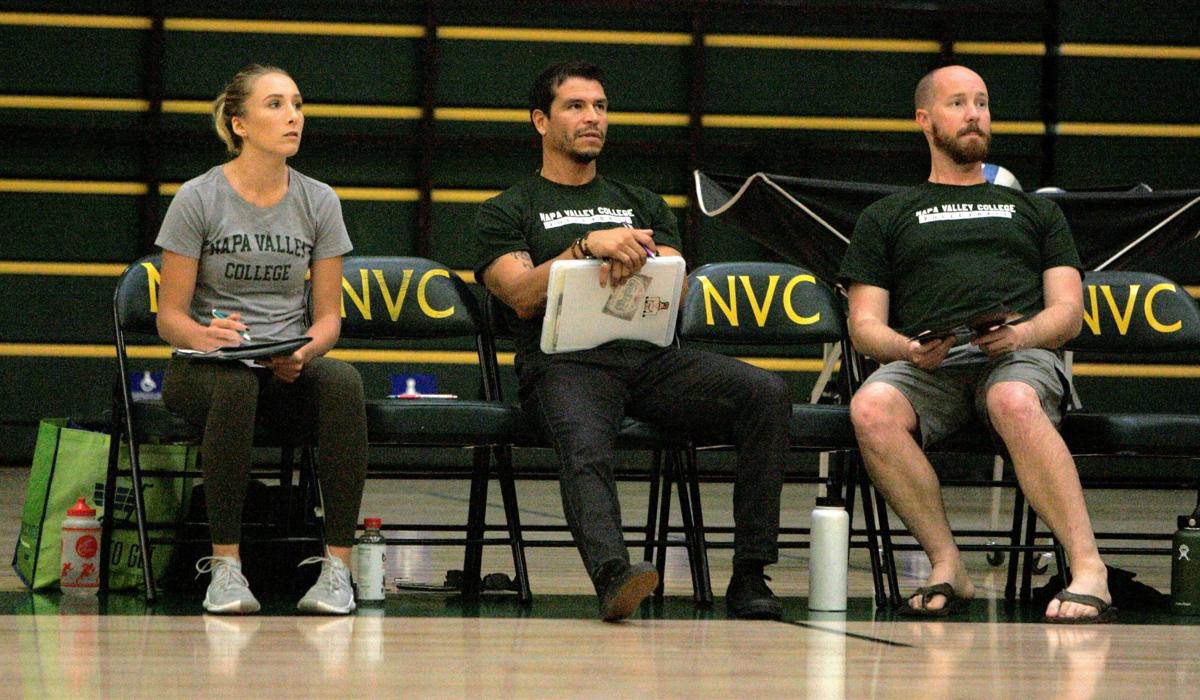 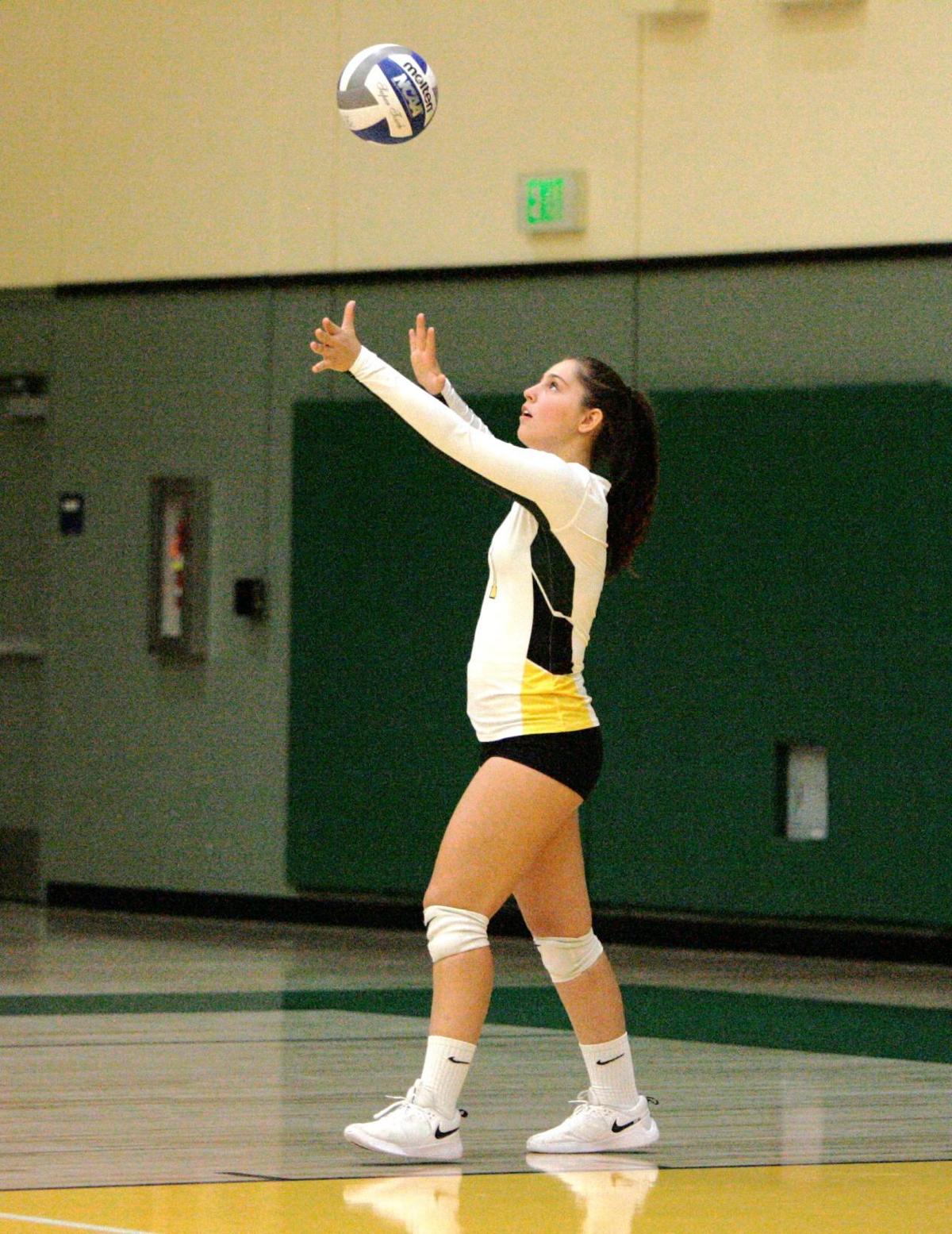 It’s rare for a volleyball team to win a set without giving up a point, but what Sophia Green did to spark Napa Valley College on Wednesday night was unfathomable.

“That was crazy, and then she served eight in a row in the second set – so that’s 33 serves in a row without missing,” NVC head coach Rachel Hadley said of the Vintage High School graduate, who had 17 aces – 16 in the first two sets.

“I just take my time,” she said of how she focusing during the service run. “I really didn’t feel any pressure. I guess when the stakes are high, you feel pressure and you might tend to make mistakes. I felt like if I did make a mistake it would be OK. I usually have a ritual. I bounce the ball three times before I serve it, do my toss the same way, and use the same arm speed.”

Her team was ready during the 17 points in which they had to participate, when she didn’t serve an ace.

“When they sent the ball back over, our team did a good job keeping me on the back line,” Green said.

“Soph is one of our toughest servers,” Hadley said, using a nickname that rhymes with loaf. “Sometimes when I know a team we’re playing is one that’s going to struggle on serve-receive, I’ll put my best servers out there first.”

Stepping to the back line after Green was sophomore setter Cassidy Schweizer. Another Vintage High product, she was leading the Storm with 30 aces, 90 kills and 188 assists entering the contest, was second with 12 total blocks and nine solo blocks, and fourth with 39 digs.

“Cass is probably our second toughest server, so it works really nicely that two tough servers right in a row to get us going.”

Napa Valley hopes to parlay serving streaks into winning streaks this season. After going 0-18 overall and 0-14 in the BVC last fall, only four of that team’s eight freshman are back.

“We love the game too much to quit on it,” said Schweizer.

“Hopefully this gets us on a roll and we can get some more W’s,” Green said. “We definitely had a tough preseason. I guess with certain teams it can be difficult to turn those losses into preparation for future wins, but we’re a pretty positive team and we see that as pushing ourselves and having potential to grow.”

Added Schweizer, “We saw the better teams and I think we definitely got better from that.”

Schweizer and Green are floor captains along with another former Crusher, sophomore Maryanna Reyes. The outside hitter led the Storm with 13 blocks coming in, was second with 54 kills and 69 digs, and third with 23 aces and 13 assists.

Also returning is sophomore outside hitter-defensive specialist Joana Lamson, a Bethel alumnus who came in fifth with both 10 aces and 27 digs on the team. Freshman middle blocker Myla Jacobo, a Napa High graduate, entered the match with team highs of 13 total blocks and 10 solo blocks, and second with 54 kills and fifth with 10 aces.

Rounding out the 10-player squad are five more freshmen – outside hitter Olivia Herrick out of Sonoma Valley (third with 45 digs, fourth with 51 kills before Wednesday), right side Leah Mitchell from Bethel (fifth with 25 kills, sixth with 16 digs), middle blocker Madeline David out of St. Helena, and North Hills Christian alumni Deborah Parinas, and outside hitter, and setter Carissa Santamaria (third with 13 assists).

Hadley – only five years older than her sophomores and in her second year at the Storm’s helm with NVC Director of Volleyball Robert Stamps and assistant coach Tony Howell – just ran out of collegiate athletic eligibility this past April when she led the Sonoma State club team to its second straight Division II title at the National Collegiate Volleyball Federation National Championships in Denver. The Nevada Union graduate was named Most Valuable Player of the tournament both years.

“Last year I was going to practice here and going to practice there (at Sonoma State), and coaching a club team,” said Hadley, who helped Cal State San Marcos win back-to-back conference crowns before coming to Sonoma State. “Now I’ve used all six years (of eligibility), so I’m done. I can’t play anymore – otherwise I would.”

The Storm won two of their first three matches this season, both in five sets, over Lassen in their Aug. 28 opener at home and over Skyline-San Bruno on Sept. 6 at the San Jose City College Classic. But they lost their next 10 matches, seven by 3-0 scores and three straight in 3-2 nailbiters, before this week’s sweep victory.

“Really our main trouble recently has been not finishing fifth sets,” Hadley said. “We’ve been taking a lot of teams to five sets and then we get to that fifth set and something doesn’t quite click and we don’t finish it. We always talk about the difference between winning it and not winning it, having that killer mentality, that killer instinct to just put it away. Your back’s against the wall, you have no time left, no cushion left, and you’ve got to put it away.

“For instance, against Marin we actually had a 6-3 lead in the fifth set. With a short match, you’d think you might be able to win that one. But there’s sort of this superstition in volleyball that if you win the switch to the other side at 8 points, you’re probably going to win the match. Marin came back, won the switch and ended up winning the match. We just kind of let off the gas and didn’t keep fighting. It’s been a frustrating hurdle to have to get over.”

But the mostly new team is starting to jell.

“Honestly, in this conference, serving and passing are the key,” said Hadley. “We have Maryanna back there and Soph back there most of the time, and having two out of three passers being veterans is super, super helpful. It helps to anchor the back row, for sure.”

“Solano is an excellent program,” Hadley said. “Darla’s been there for years and has been able to build that program to be really strong and (have high expectations). That’s what we’re in the process of building. If you attract more quality players, you attract bigger hitters. But next year, when our bigger girls are mature as players, they’ll be more consistent and a little bit more powerful and hopefully we can get some big, tall workers in as well.”

“Playing Solano is actually really fun, to see a better team and see what we can do against them,” Schweizer said.

Added Green, “Solano has a great offense and seeing what our defense can do against them is fun, too. I think everyone in our league is beatable, but Solano is definitely the toughest competition. Most of the time, teams lose because they’re making mistakes and not letting the other team do it. But if we keep fighting until the end and finish things, we can do some great things.”

“Opponents might out-gun us, but we’ve been playing defense out of our minds, so we frustrate a lot of teams,” Hadley said. “Where we struggle more is when we play teams that are evenly matched with us. But whenever we play a better team, it pulls the quality play out of us for some reason, and I think that’s because that’s already in them; they just need to be pushed a little bit.”

She liked that they swept the Comets on Wednesday, after needing five sets to get their first two wins.

“We always say that whenever you walk into a game and you know you’re better the other team, you don’t respect them by letting off (the gas),” the coach said. “You respect them by playing at your highest level.”

Storm volleyball is a year-round sport.

Green, who is majoring in forensic anthropology, said she juggled school and volleyball with a job last season but has too big a class load to work this fall. She and Schweizer, who is studying to be a dental hygienist, don’t have much social time except with their teammates and – having known each other since the sixth grade – each other.

Green said the Storm are hoping to at least come away with a winning conference record. That means they would have to win at least seven of their last eight BVC matches.

Schweizer said the sophomores hope their passion for the sport passes on to the freshmen and inspires them to come back next year.

“I think they see the fun in it just because this whole team loves volleyball,” she said. “We definitely all get bummed when we lose games, but we just see it as motivation to keep getting better. I don’t think they get bored with it.”

Added Green, “Hopefully we get some people in next year to take our places and keep it going. Our coaches have a good background in volleyball and they’ve all done some pretty great things.”

The Napa Valley College volleyball program went from a winless 2018 season to 6-16 this fall.