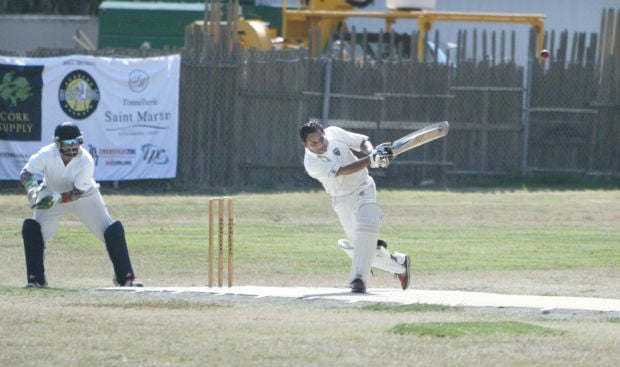 Bijoy Ojha, right, of the Napa Valley Cricket Club plays shot on this way to a score of 27 as a Thunderbolts player looks Aug. 9 in Calistoga. 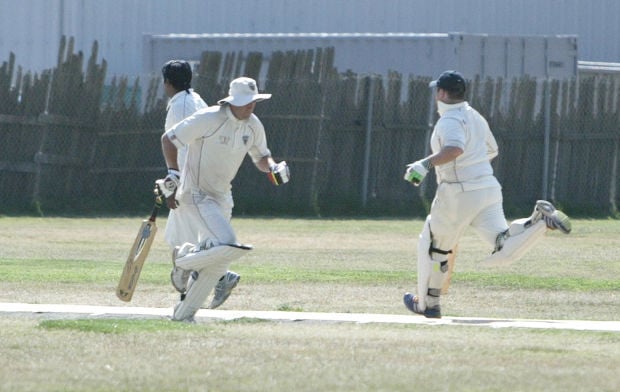 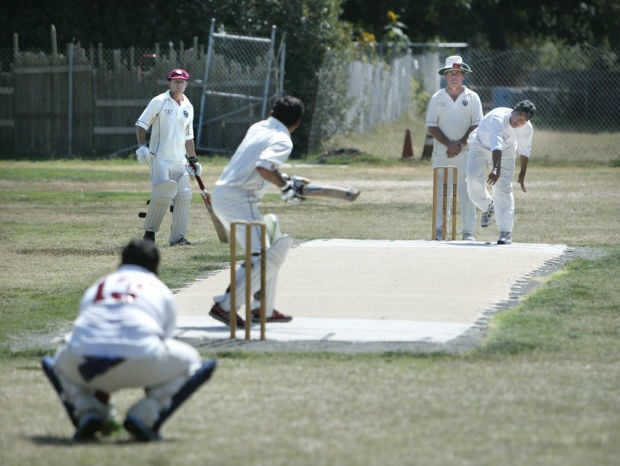 The Napa Valley Cricket Club dropped an enthralling, high-scoring encounter against the visiting Thunderbolts, the Bay Area Cricket Alliance league leaders, on Aug. 9 at the Napa County Fairgrounds in Calistoga.

Napa Valley was hoping for a win as big as its 2013 win over league opponent Berkeley of the NCCA league, but its valiant effort came up short in the end.

The Thunderbolts arrived after a night spent in wine country, eager to get going and opted to bat first. A quick-fire opening partnership of 60 runs from opening batsmen Mali and Babar, in just 8.5 overs, set a solid foundation for the Thunderbolts. Even after NVCC captain Martin Mackenzie had Mali trapped leg before wicket, the strong run rate continued.

But two NVCC bowlers, New Zealander Bernie Peacock and Irishman Andrew Healy, had other ideas. Each bagged three wickets for the day on either side of drinks. They were supported in the field with some great catches — particularly from wicket-keeper Jeff Keene, who had a strong game with the gloves, including a stumping off Healy.

Napa Valley welcomed its first celebrity sub fielder of the season, Calistoga Mayor Chris Canning, who showed a great arm and ability to be part of the on-field chatter.

The Thunderbolts batsmen showed Peacock, NVCC’s top wicket taker of the season, little respect in sending his first ball of the day sailing out of the ground for a maximum six. In the end his five overs cost 49 runs, but counted amongst them were those three valuable wickets. As the Thunderbolts headed toward the drink break, Healy’s first wicket took the wind from their sails. But they had still amassed 138 runs from 17 overs. Healy’s two further wickets in the 20th over helped slow the Thunderbolts somewhat, and wickets from New Zealander Bill Nancarrow, South African Dale Moorehouse and Mackenzie aided the NVCC cause, with the Thunderbolts being bowled out in 32 overs for a formidable 243 runs.

After lunch provided by club sponsor Calistoga Roastery, Mackenzie had some decisions to make. With such a big total to chase, he went out with his big run makers from the off. It was to be a similar tale, with each of the NVCC top order as they all got great starts (to their Innings) but were unable to convert any of them into a serious total.

Three run-outs didn’t aid the NVCC cause as Moorehouse (19 runs off 23 balls) went in the eight over with Nancarrow (0 off 3) and Australian Michael Rule (22 off 33) all losing their wickets that way. Napa Valley president Phil Bourke (14 off 15) fell to a ball that clipped the top of his off-stump, while Keene lost his wicket to a good ball that saw him clean bowled. A solid knock from Bijoy Ojha saw him post a score of 27 runs from 29 balls, but once he fell it was the beginning of the end for the NVCC. A final stand flurry from Australian Pete Carson (19 off 21) wasn’t enough to bring it home for Napa Valley and the hosts ended up all out for 177 with four overs of their allotted 35 remaining.

“We all had a fantastic day at the fairgrounds playing a great bunch of guys in the very talented Thunderbolts team” said Mackenzie. “After a fast start from their batsmen, we fought back well to get them all out despite some dropped catches. The top of our batting order looked good today, but a series of silly run outs and the lack of a single stand out innings cost us the chance of an epic victory. “Nevertheless, we had a fun day pitting ourselves against a strong league team and enjoyed the challenge, making the result less of an issue.”

The traditional Clos du Val “Man of the Match” Award was presented by Mackenzie to Monty Bijlani for his all-around performance.

Napa Valley’s next game is at 10 a.m. Saturday, Aug. 23 at the fairgrounds against the Sonoma Gullies, the second meeting of the teams’ three-game season series.

Bijoy Ojha, right, of the Napa Valley Cricket Club plays shot on this way to a score of 27 as a Thunderbolts player looks Aug. 9 in Calistoga.