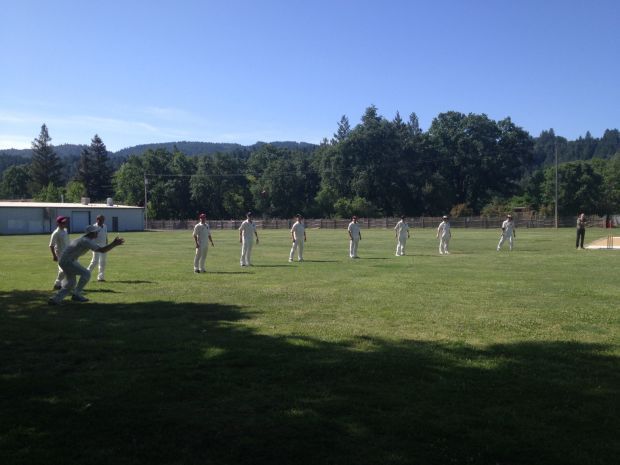 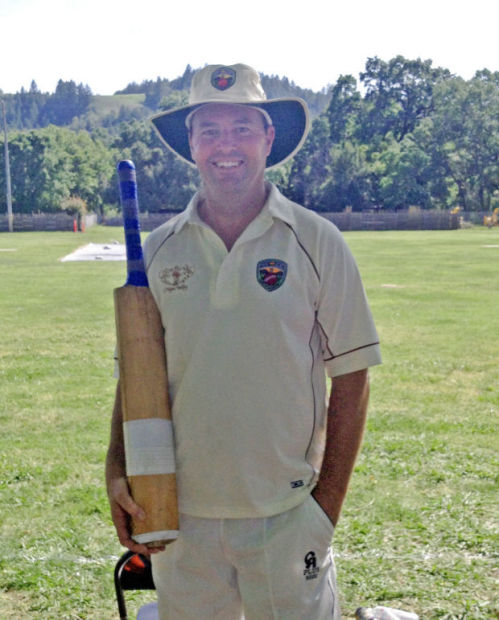 Napa Valley Cricket Club's Bill Nancarrow carried his bat against the Sonoma Gullies for a not out innings of 84 runs of 91 balls.

With the success of the traditional World Series game behind it, NVCC renewed its rivalry with Sonoma. The Santa Rosa-based Gullies won the toss and opted to bat first on a cool and unusually breezy day.

Napa made early inroads with a wicket for Australian Tim Irwin. Sonoma put its heads down and Shankar and Arjun built a solid partnership of 59 until Shankar lost his wicket to some probing bowling from South African Dale Moorehouse and a great catch from Australian Nick Withers. Wickets continued to fall with regularity thanks to some excellent bowling from Irwin, Moorehouse and club captain Martin Mackenzie of New Zealand, who each ended the day with two wickets. Napa’s performance in the field was inspiring, with a total of three run outs and four well-taken catches. Sonoma went to lunch on 159 all out in the allotted 30 overs, a good score given that previous encounters have yielded scores of 130 – 135.

Napa started the chase with dogged purpose and openers Bill Nancarrow of New Zealand and Moorehouse set a very strong foundation for the team. In the end, Nancarrow carried his bat (went through the innings from start to end “at bat”) for an excellent 84 not out that included 12 boundaries (9 x 4, 3 x 6). Nancarrow was supported by Moorehouse at the other end, who himself put on a purposeful 27 runs off 43 balls. The pair went to the drinks break with their wickets intact and well on their way to the target with a score of 75 on the board. As is often the way after a break, Moorehouse lost with wicket soon afterward to a leg-before-wicket decision in the 16th over. Despite a couple of ducks, a thumping 26 off 26 from Irwin allowed Englishman Colin Nolan to join Nancarrow in the middle as Napa won the game with time (3.1 overs) to spare.

The traditional Clos du Val “Man of the Match” Awards went to Sunni of the Sonoma Gullies team for his great performances with the bat, holding the tail together for a fine innings.

“It’s a great start to the season,” said NCCC captain Mackenzie. “We played well in all three disciplines today and our fielding in particular was outstanding. It’s great to have some new members for the season ahead, and Dale and Colin both made excellent contributions.”

A week later came a Beverly Hills Hollywood, which has had celebrities such as Hugh Grant and Mick Jagger donned its whites in the past. The game was a return fixture, with Napa having traveled south in November. Napa were determined to put right that result and in the end prevailed comfortably.

Jeremy Reed, the BHHCC captain, won the toss and chose to field first, opening his bowling with Alex Rylance and 14-year-old Ben Kater. The pair ultimately toiled against a strong opening batting partnership of Australian Tim Ford and Moorehouse. Ford notched up a relatively quick 53 off 31 balls, including six maximums, and his innings included some fine shots off his legs and toes. Moorehouse continued the season with his trademark watchful style, but went on to score an impressive 73 runs from the 89 balls that he faced.

Napa went to drinks at 110 for the loss of 2 wickets and the scoring onslaught continued after drinks, with Australian Nick Withers hitting a fine 63 off 44 on his 40th birthday and Indian Bijoy Ojha contributing a quick-fire 23 from 11 balls to round out the innings with an impressive 243. The pick of the BHHCC bowlers was Nick Betts, who took two wickets in his five overs for 27 runs.

After lunch, BHHCCC set about the task of chasing down the mammoth Napa Valley total. With NVCC having scored an average of 8.1 per over, it was always going to be a tough task. The loss of early wickets didn’t help the visitors’ cause, with Reed going early and cheaply and young Kater getting himself run out after a dropped catch in the field. Nigel Nisbet and Alex Rylance staunched the flow of BHHCC wickets, putting on 38 off 32 and 68 off 41, respectively. But in the face of excellent NVCC bowling and fielding, it was always going to a tough chase. Four wickets for New Zealander Bernie Peacock were the highlight of the day in the field for Napa Valley, in addition to a stumping for wicket keeper Clive Richardson, 2 wickets for Tim Irwin and a number of great catches taken by the team.

The “Man of the Match” Awards went to Alex Rylance of the BHHCC for his great performances with the bat and score of 68 off 41 balls.

“It’s always a fun game against the Napa Valley boys,” Reed said. “They play good, social cricket and are a great bunch of chaps both on and off the field. We look forward to continuing our annual game against them by welcoming them to Los Angeles again in 2015.”

Napa Valley Cricket Club's Bill Nancarrow carried his bat against the Sonoma Gullies for a not out innings of 84 runs of 91 balls.