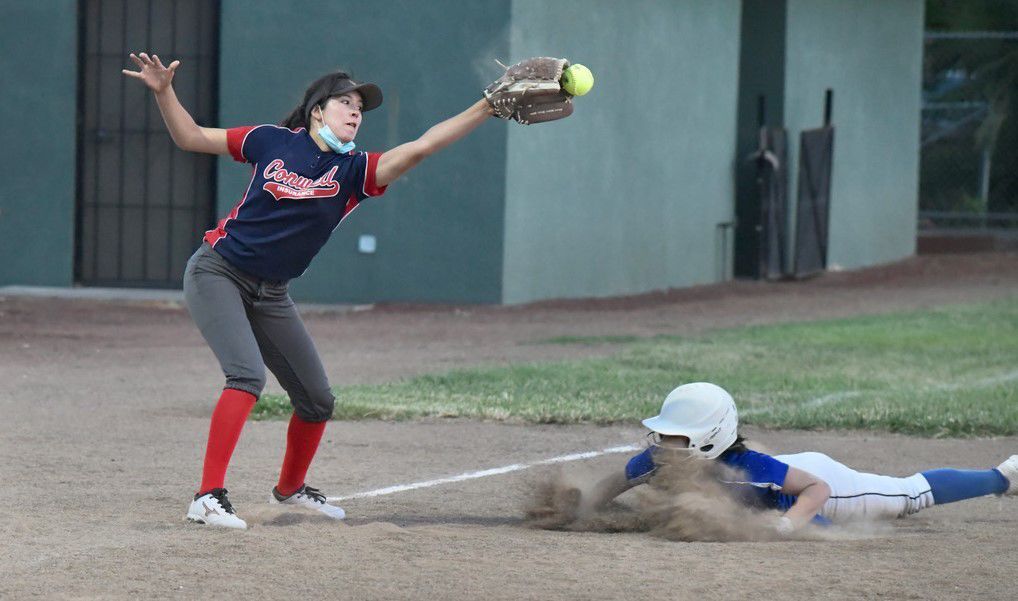 Piper Johnson of M.I.V. is safe sliding into third base against Conwell Insurance on Monday night at Kiwanis Park. 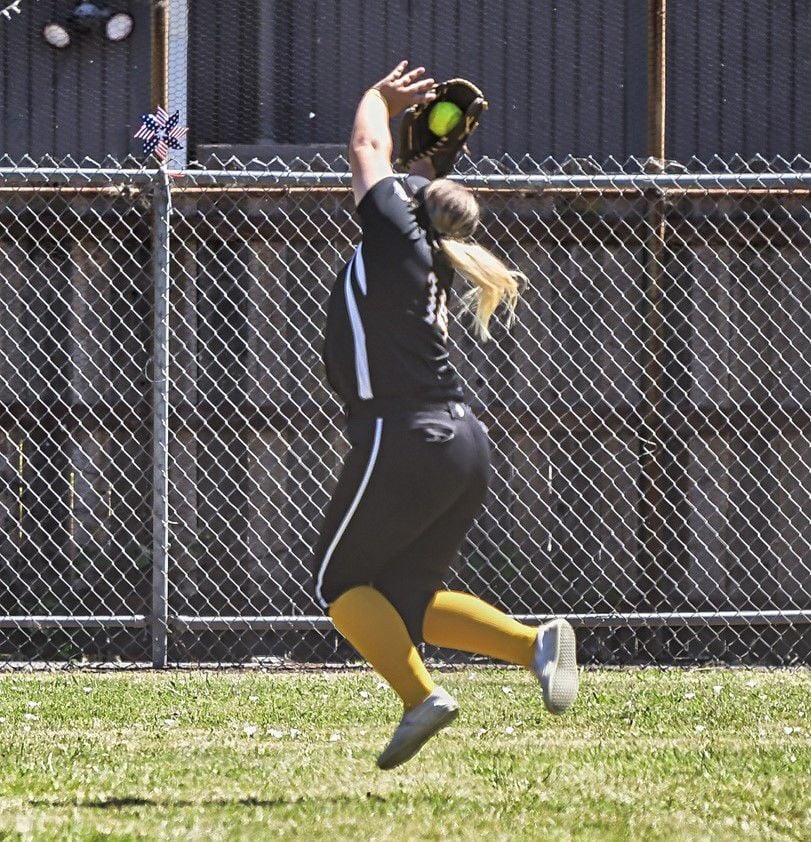 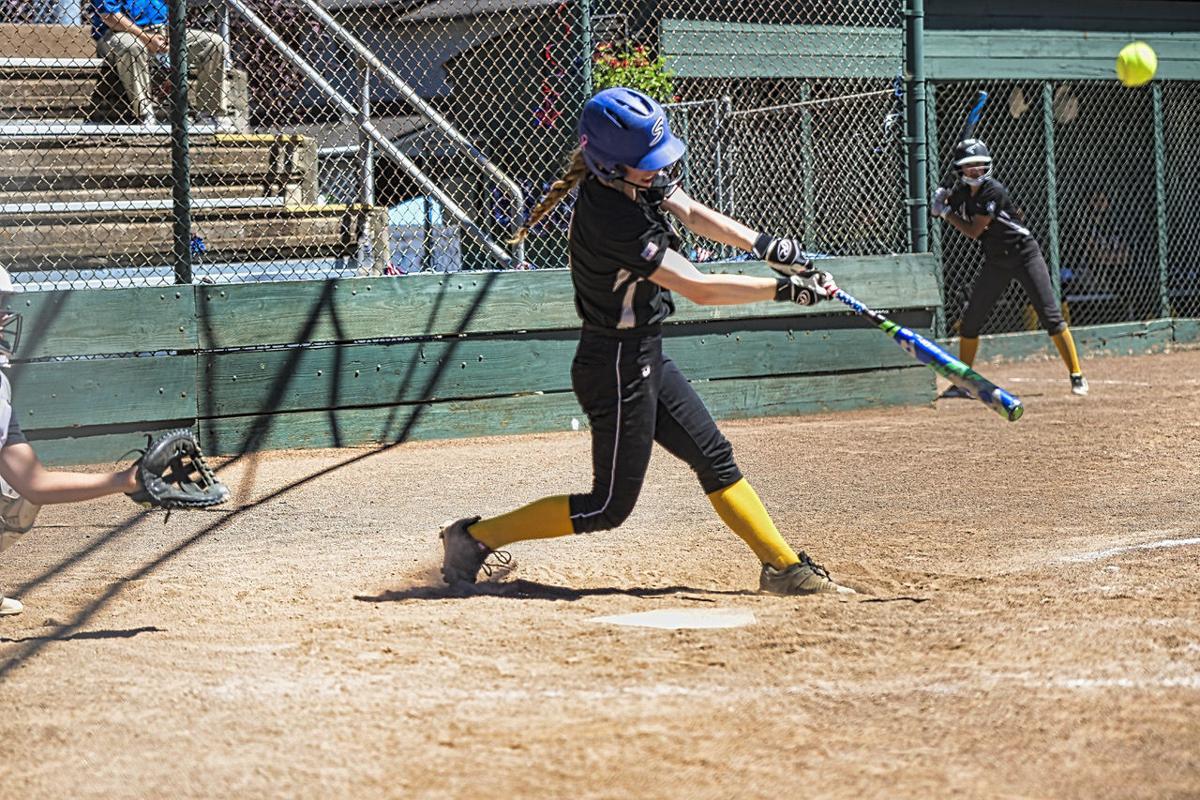 Caity Newburn doubles for A.M.P. Construction in the second inning against M.I.V. Insurance on Sunday at Kiwanis Park. 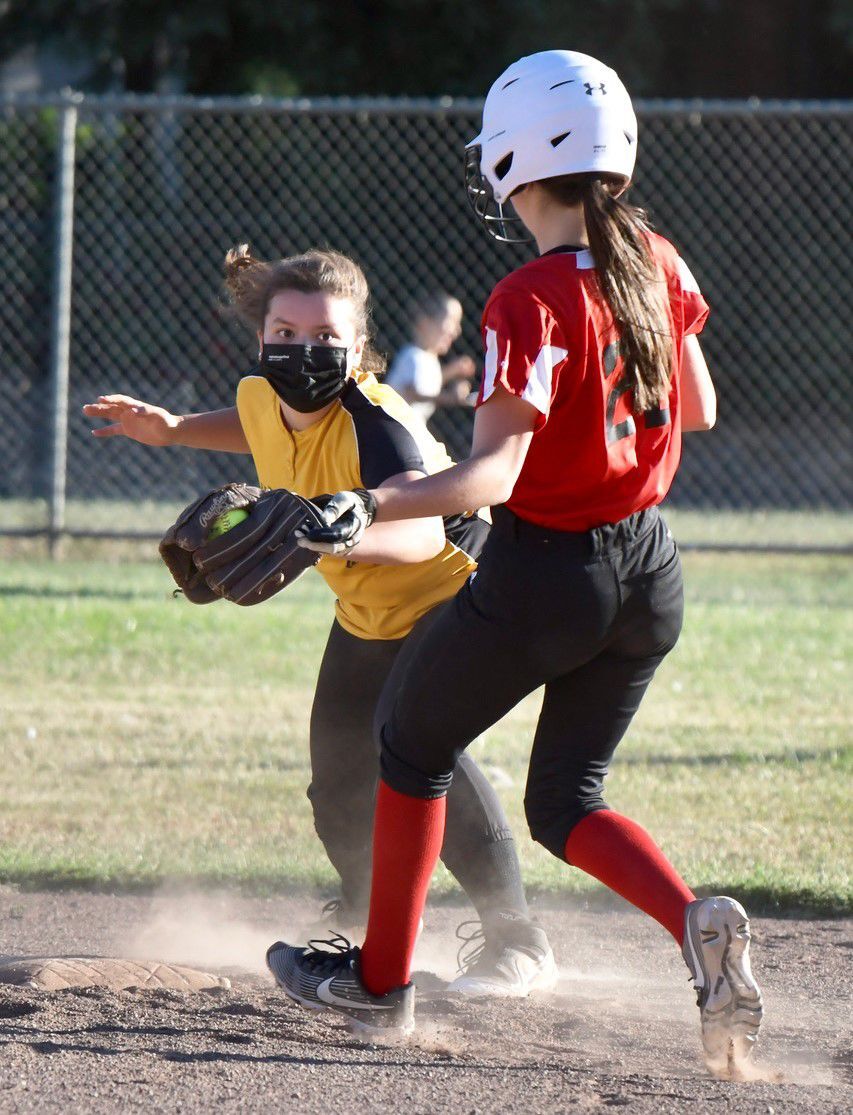 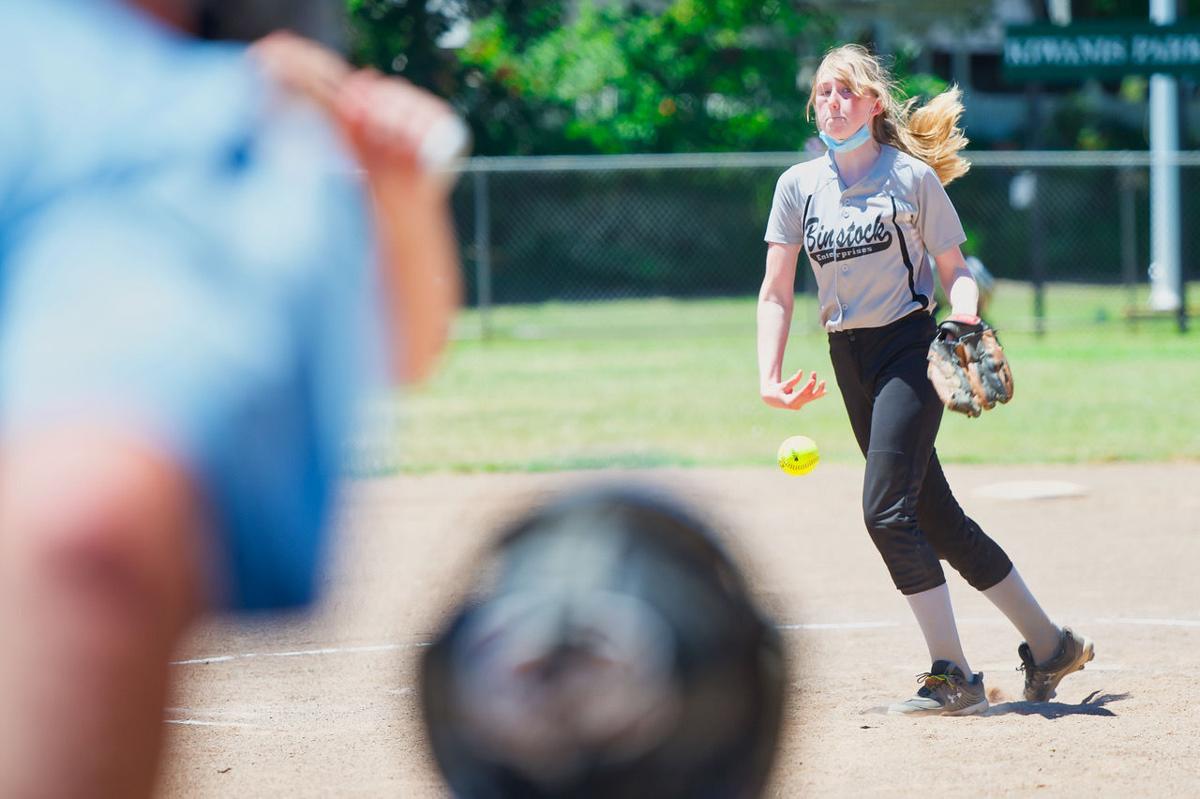 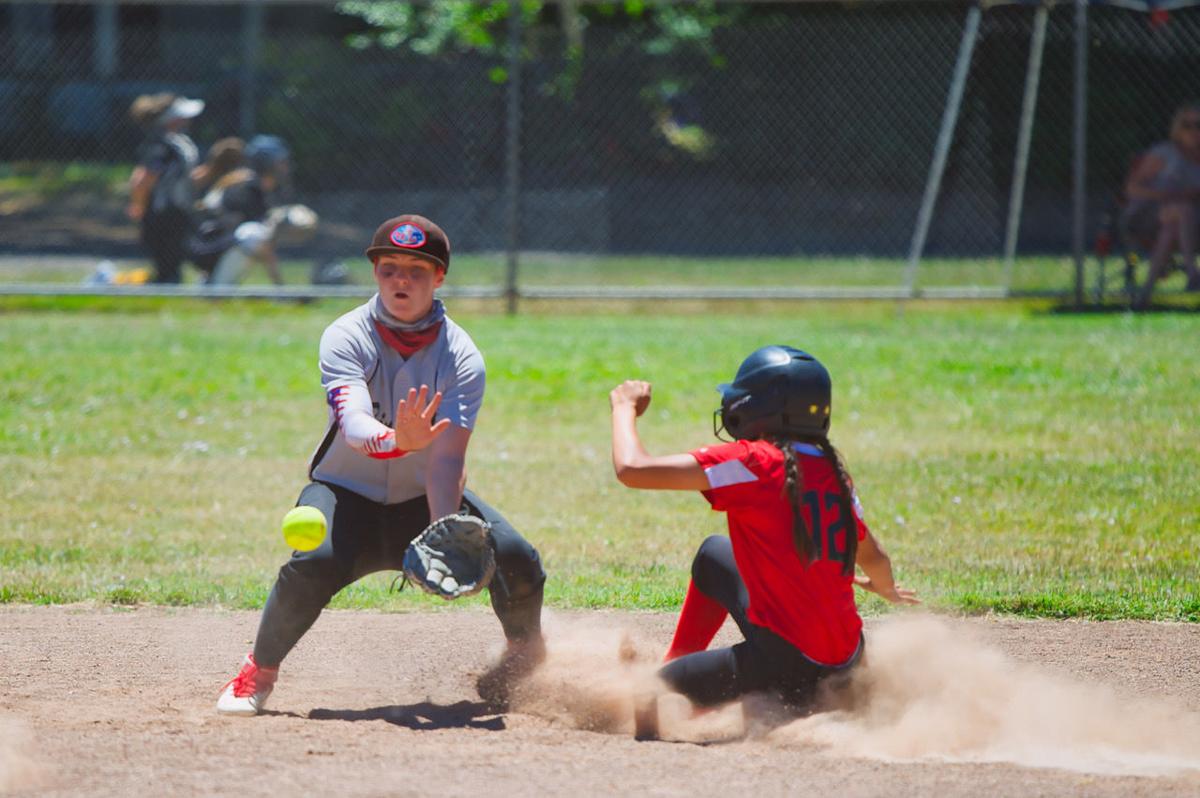 Binstock Enterprise's Noleen Cichon waits for the throw as Soscol Auto Body's Desiree Griffith slides into second base on Sunday.

The league's 2020 season was canceled because of the pandemic, and it's come back with three teams in each division.

In the 12- to 15-year-old Majors game, leadoff batter Ava Cortez scored in all three plate appearances, getting a single and two walks, to lead Binstock. Noleen Chicon was 1 for 2 with a walk and run scored, Karly Botts went 1 for 2 with a walk, and Estrella Bautista went 1 for 1 with a walk. Brooklyn Miller pitched a six-hitter with five strikeouts.

For Soscol Auto Body, Jovana Hurley was 2 for 3 and pitched a four-hitter with six strikeouts and Ryann Chaddock went 2 for 2 with two RBIs and a run scored. Mia Griffith was 1 for 3 with a run scored, Alexis Kewell 1 for 1 with a walk and two runs scored Kayla Breshears walked twice, drove in a run and scored a run.

In the second game, Desianna Garcia pitched perfect ball in four of the five innings for A.M.P. She allowed her only base runners in the second inning, when M.I.V.'s Lindsey Feinberg led off with a single and scored on Savannah Blanco-Kite’s two-out single.

But A.M.P. had already taken a 5-0 lead in the first inning, sparked by a three-run homer from Caity Newburn (2 for 2, double, three runs) after Taylor Lauritsen (1 for 2) was hit by pitch and Kelsey Lauritsen walked to open the frame. Xitlali Mora ((1 for 2) walked and scored Emilee Duncan also had an RBI single in the inning.

For Conwell, Maddie Smith went 1 for 2 with a double and Emily Franco was 1 for 2.

On Tuesday, R.E. Maher won the Majors game 8-2 over Soscol Auto Body. The winners were sparked by an inside-the-park home run from Mia Griffith (1 for 2). Jovanna Hurley pitched and rang up eight strikeouts while walking twice at the plate. Other hits came from Madelyn Huss (1 for 1) and Layla Yeager (1 for 2).

For R.E. Maher, pitcher Noelle Rofkahr had six strikeouts and went 1 for 1 at the plate. Alexis Lund was 2 for 3 and Alexis Wade went 1 for 2.

In the Seniors game, it was A.M.P. holding on for a 3-1 win over Conwell behind starting pitcher Desianna Garcia, who tossed three strikeouts in two innings of work and was 1 for 2 with the bat, and reliever reliever Emilee Duncan. Ava Moreci went 1 for 2 at the plate.

Detroit Lions embrace being underdogs in 2021

What will it take for the Giants to take down the Dodgers?

What will it take for the Giants to take down the Dodgers?

What impacted the line move on the Dodgers?

What impacted the line move on the Dodgers?

Sabine Schut-Kery, an elite dressage rider who moved to Napa last year from Thousand Oaks to operate a private training business out of Toyon …

The Vintage High football program has seen many impactful people throughout its 49-year history. However, one would have to look long and hard…

The year was 1980. AC/DC debuted its hit song “You Shook Me All Night Long” and the Vintage High football team shook all 13 of its opponents all night long on Fridays. The Crushers went 13-0, part of a 19-game winning streak dating back to the 1979 campaign, on the way to winning the CIF Sac-Joaquin Section AAA title.

Biles was the defending Olympic champion in the vault. Plus, get the latest on the games tonight.

Piper Johnson of M.I.V. is safe sliding into third base against Conwell Insurance on Monday night at Kiwanis Park.

Caity Newburn doubles for A.M.P. Construction in the second inning against M.I.V. Insurance on Sunday at Kiwanis Park.

Binstock Enterprise's Noleen Cichon waits for the throw as Soscol Auto Body's Desiree Griffith slides into second base on Sunday.