Napa's Brooke Gongora tees off during a recent tournament at Half Moon Bay Golf Links. 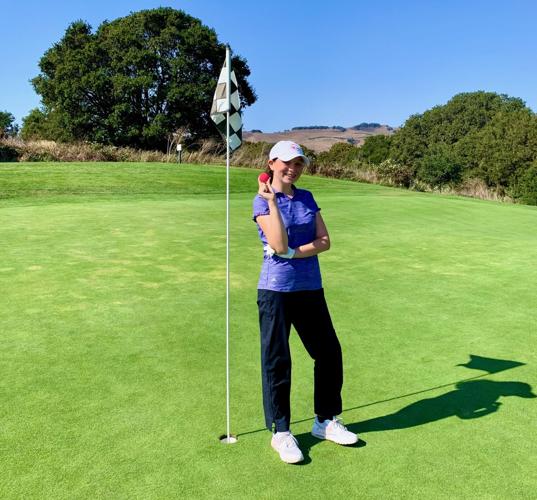 Brooke Gongora holds up her ball after her ace at Chardonnay Golf Club on July 29. 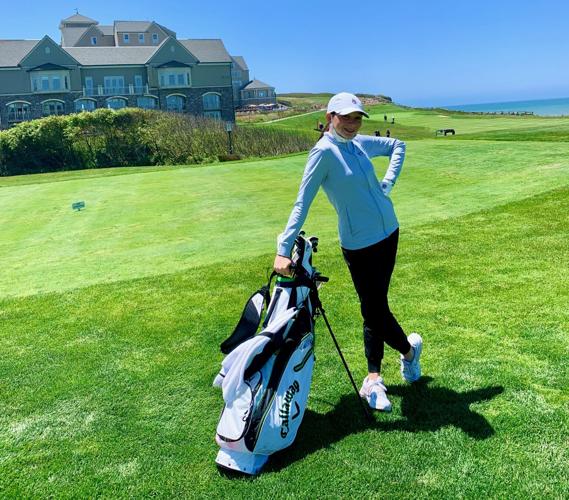 Brooke Gongora, who will be in the seventh grade at St. Apollinaris Catholic School in the fall, poses with the Ritz-Carlton Half Moon Bay in the background during a tournament at Half Moon Bay Golf Links.

A little over a year ago, Brooke Gongora achieved what her father called a “milestone that happens to only a few of us in this crazy game of golf.”

The shot on July 26, 2021 was even more impressive in that she made it during a US Kids Golf Tournament, far from home at a Presidio Golf Course in San Francisco — which she had played for the first time ever in a practice round a few days before — and kept her composure enough to finish first in her 11-12 age division.

The story keeps going for Brooke, who will be in the seventh grade at St. Apollinaris Catholic School in the fall.

Her dad, Shon Gongora, is her caddie in tournaments and her opponent in practice rounds at Chardonnay Golf Club. Brooke felt rusty as she and Shon hit the course last Friday.

“It was the first time I had picked up a club in over three weeks due to a family vacation. We were on the eighth hole and I was playing from the white tees with my dad, about 138 yards out,” Brooke recalled. “My dad played his first shot, putting it relatively close — 6 to 8 feet from the hole — and challenged me to get it closer. I took him up on the challenge.

“I used my trusty 9 Iron and hit a nice shot that bounced two-times and dropped into the hole with some force. You could hear it hit the pin from the tee box.”

The 12-year-old had sank her second lifetime hole-in-one — just a year and three days after the first.

“I started jumping for joy, still in disbelief, but laughing and high-fiving my dad,” Brooke recalled. “My dad gave me a big hug. While driving down to the green, we both kept saying ‘I can’t believe that just happened, a second hole-in-one.’ All my dad was saying was, “I’ve never had one.”

Last year’s ace was on the par-3 fourth hole at the Presidio, a 97-yard shot from the red tees using that trusty 9-iron.

“It was an elevated tee box and I hit a nice, clean, high shot onto the green,” Brooke recalled. “The ball landed about 6-8 feet from the hole. I actually looked away when it landed on the green, just thinking it was a good shot I was happy with. But then Dad yelled ‘Look, look” as the ball kept slowly rolling closer to the hole, eventually dropping in.

“I didn’t know how to react, as I was in a competitive tournament and didn’t want to overreact, while still being in a bit of shock. My dad was also in disbelief, saying ‘Did that really go in?’ It took a while for it to settle in, and I still wasn’t sure until I got to the flag to see my pink ball staring up at me in the cup. That is definitely a day I will never forget.”

A hole-in-one on a par-3 is essentially an eagle, or 2-under-par. Brooke has also had an eagle on a par-4, and been close to another eagle — and even to another ace.

“I have had a few memorable shots, one of which was a 100-yard approach shot on Hole No. 1 at Chardonnay that I knocked in for an eagle,” she said. “Another shot was a 150-yard second approach shot at Lincoln Park Golf Course in San Francisco in a US Kids tournament that came up 1 inch short of going in for an eagle.

“Most recently was a par-3, 112-yard hole at Rancho Murieta in the NorCal State Tournament, where I hit it up on an elevated green 3 inches from the hole.”

Shon doesn’t mind toting around Brooke’s giant golf bag at tournaments and giving her pointers, even if they argue sometimes.

“It’s pretty cool to be able to caddie for my daughter in these junior tournaments and witness her progress and accomplishments,” he said. “It’s been nothing but a positive experience to meet other junior golfers and families, and to play a sport that teaches and nurtures so many life skills that help build character and discipline. It’s pretty special. We are making memories for a lifetime.

“Don’t get me wrong: it’s not always pretty. She has fired me a few times,” he laughed. “But at the end of the day, it’s about having fun. As long as she wants to continue to play and compete, we will be there to support her.”

Brooke has been playing golf since she was 5, and competitively since age 10. She has played in about two dozen 18-hole tournaments in the US Kids Golf organization over the last two years.

She has been with the same coach since the beginning — Matt Dito, one of the head professionals at Silverado Resort and Spa.

“Matt has become a great friend and mentor to Brooke,” Shon said.

She also enjoys playing soccer, basketball — of course, since her uncle is Vintage High School varsity boys basketball head coach Ben Gongora — and volleyball. But don’t expect her to become a three-sport athlete.

“Golf is her first choice over the others and she spends a great part of her time practicing and preparing for tournaments throughout the week,” Shon said. “Right now she is on a schedule for a tournament a week for the fall.”

Calistoga native Dick Vermeil’s life journey has carried him across both the region and the nation, but has spiritually and emotionally never veered from his roots.

Where Are They Now? Aaron becomes big-time two-sport star, on TV

Former Napa High football standout Austin Aaron gave up his NCAA Division I full-ride football scholarship at UC Berkeley to pursue acting, and is now in the HBO Max Series "Winning Time: The Rise of the Lakers."

Nacho Franco talks about what has driven him to be head coach of the Napa High wrestling program for a quarter of a century.

Time Out With ... Meagan McConnell, a former St. Helena basketball player who is married to a Saint Mary's College coach

Meagan McConnell, known as Meagan Densberger when she graduated from St. Helena High School in 2007, is married to Saint Mary’s College men’s basketball assistant coach Mickey McConnell and said it's been a challenge to be a mother to two young children.

Vermeil, a Calistoga native who led the Rams to a Super Bowl win in January 2000, joined seven others who waited years or decades, to get the call to Canton.

Trinity Billingsley and Destiny Evans are the Napa Valley Register's 2021-22 Napa County Girls Basketball Co-Players of the Year. They follow 2020-21 Player of the Year Jazmine Fontilla, whose junior season was ended by a knee injury after just eight games.

17 & Under Baseball: Napa Valley goes 4-0 in own tournament

The Napa High School Spiritleaders completed an elite private dance camp put on by the National Dance Alliance this past weekend.

The players’ union has until the end of business Friday to respond in writing.

Napa's Brooke Gongora tees off during a recent tournament at Half Moon Bay Golf Links.

Brooke Gongora holds up her ball after her ace at Chardonnay Golf Club on July 29.

Brooke Gongora, who will be in the seventh grade at St. Apollinaris Catholic School in the fall, poses with the Ritz-Carlton Half Moon Bay in the background during a tournament at Half Moon Bay Golf Links.