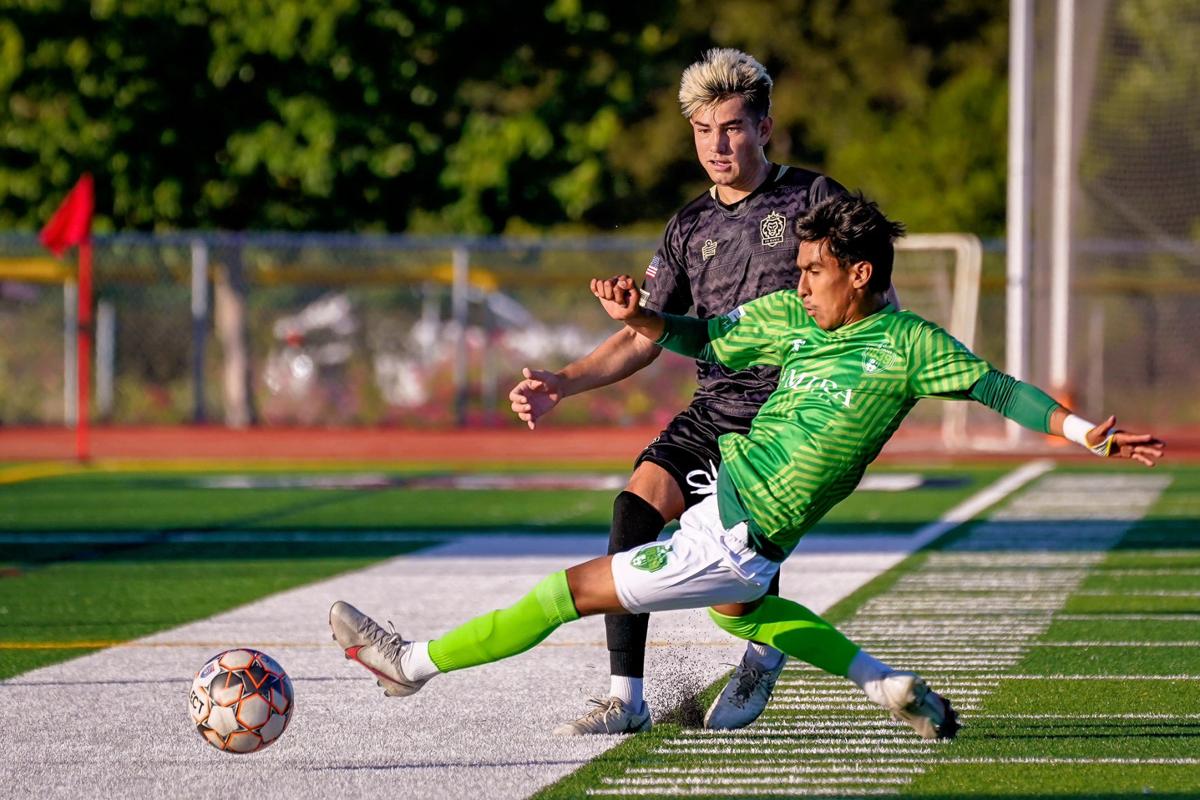 Napa Valley 1839 FC's Luis Mendoza, right, knocks the ball away from Tyler Moss of FC Davis in the first half Saturday night at Justin-Siena's Dodd Stadium. 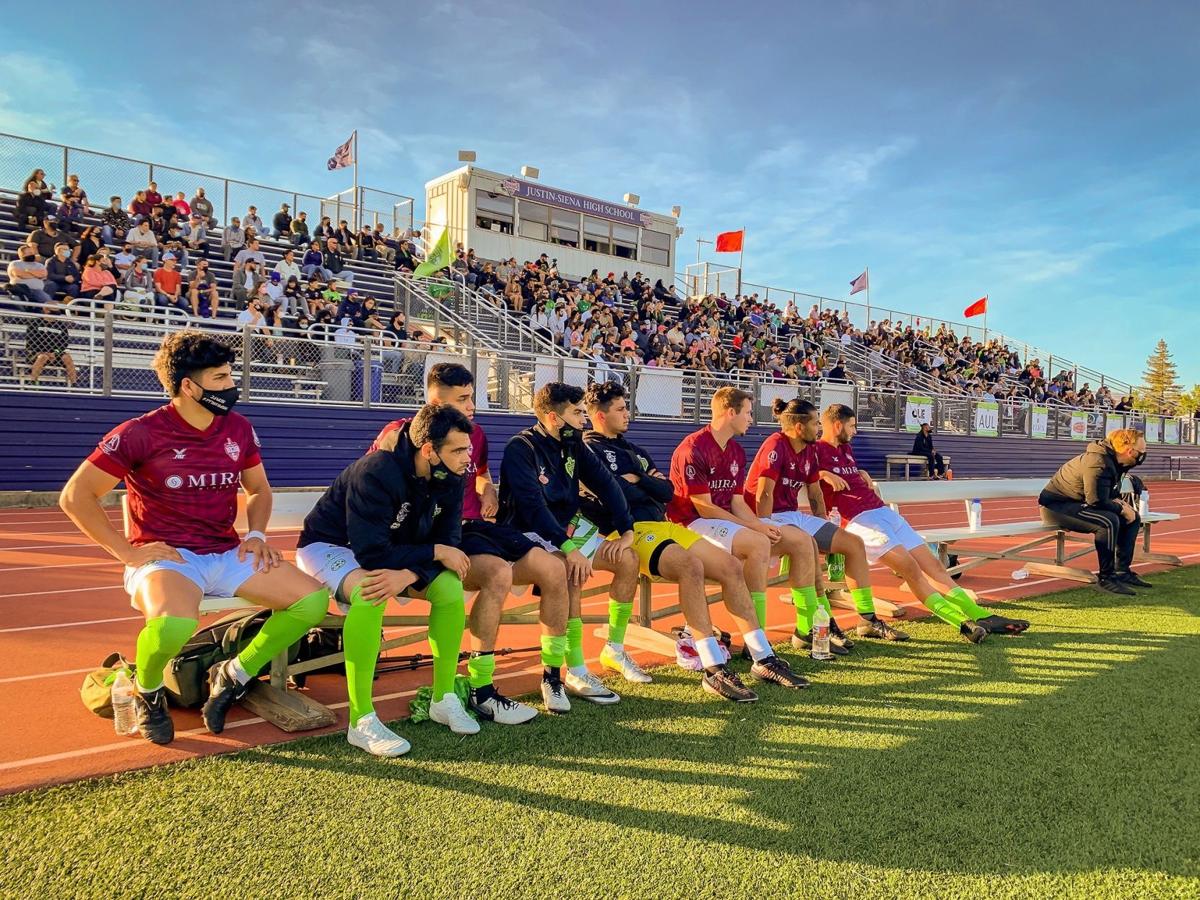 Napa Valley 1839 FC got a strong turnout of fans for its season opener against FC Davis on Saturday night at Justin-Siena's Dodd Stadium. 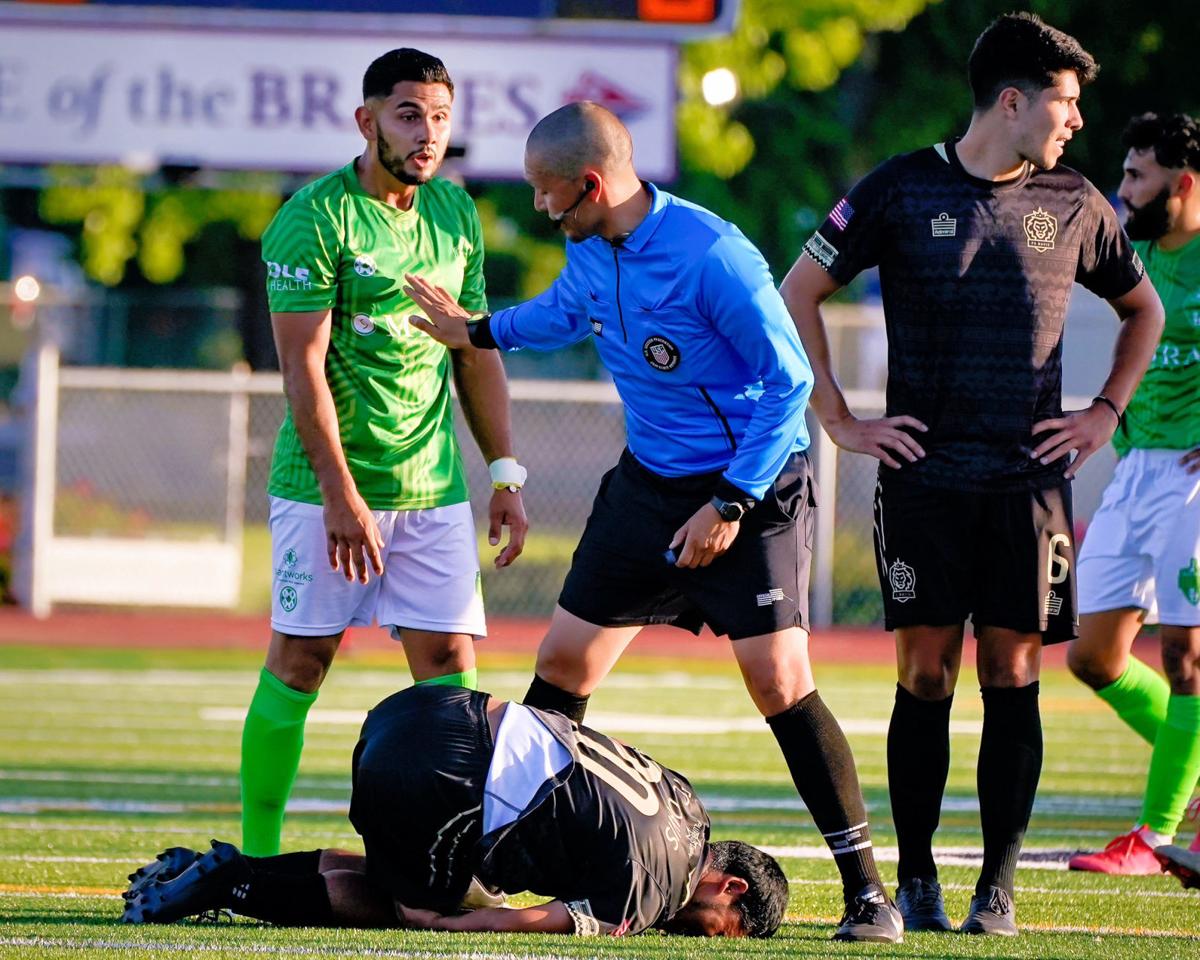 Napa Valley 1839 FC's Luis Ramirez, left, is admonished by a referee before getting a yellow card against FC Davis on Saturday night at Justin-Siena's Dodd Stadium. 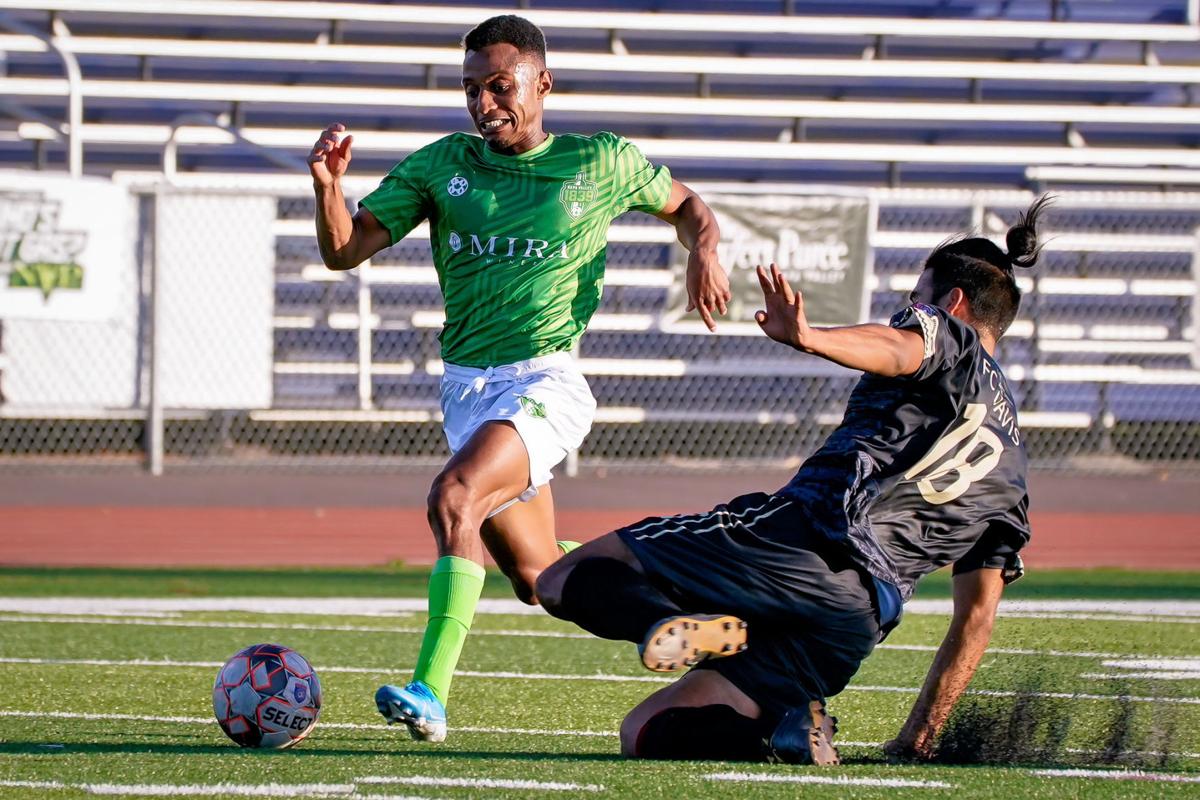 Napa Valley 1839 FC's Paris Martins, left, sprints with the ball before getting it deflected by Jaime Robles of FC Davis in the first half at Justin-Siena's Dodd Stadium. 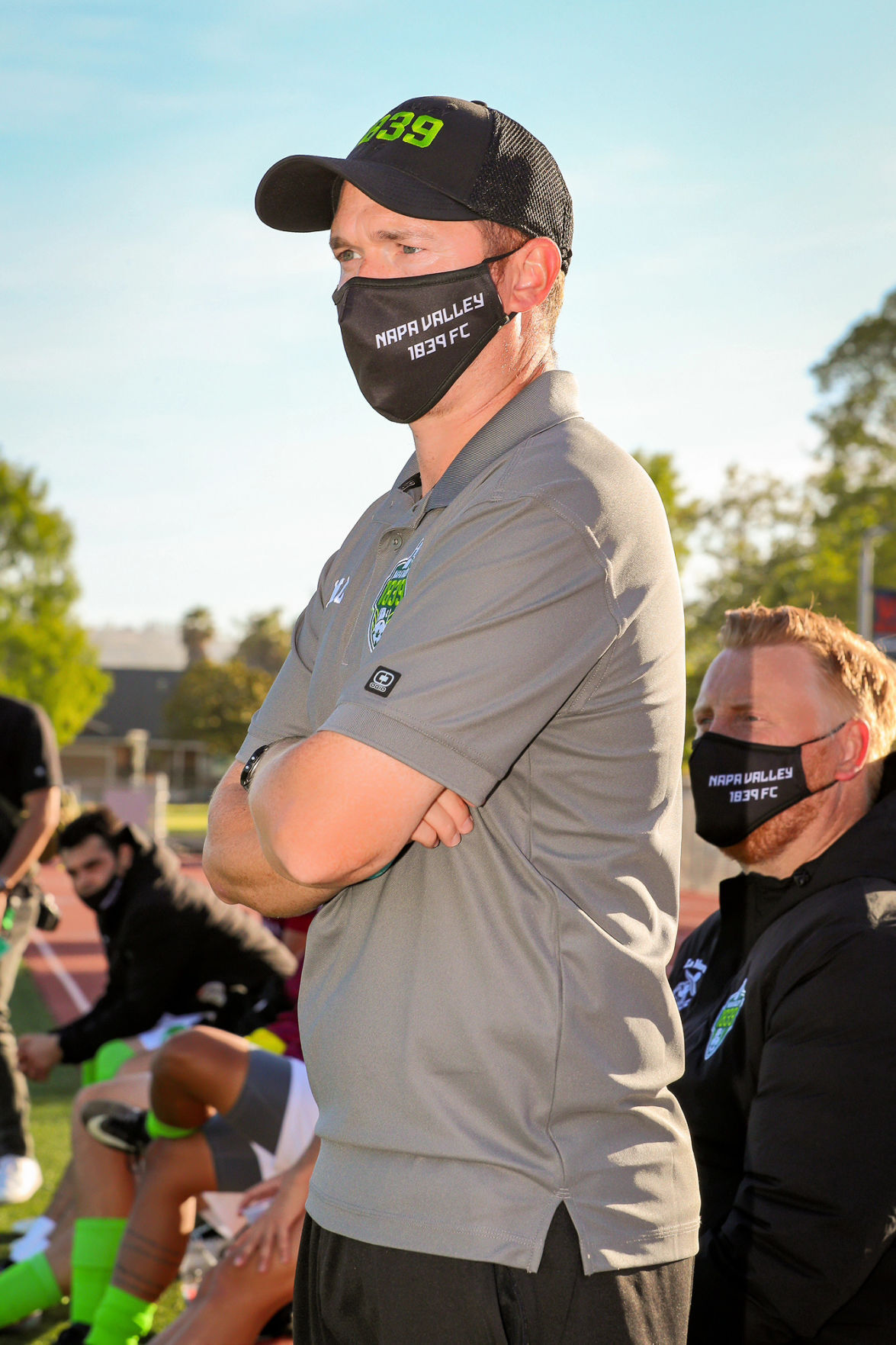 “After not playing against other teams for a year, there is nothing like match intensity against another side,” said second-year 1839 FC head coach Mark Corbett. “I also loved seeing the crowd get into it.

“A big collective of things and following protocols had to happen for us to have this.”

There were around 500 socially distanced spectators on hand, but 1839 FC looks to open up to full capacity after statewide mandates are lifted June 15 — in time for the club’s June 19 derby against rival Sonoma County Sol.

Napa Valley controlled the ball for most of the contest, but a goal on a penalty kick in the first half and a late score from Sacramento State center back Jaime Robles gave the Golden Lions the victory.

“In the first half we knew what to do, but with them being the defending league champions, we gave them too much respect in the first half,” Corbett said. “We created chances in the midfield, but it was a bit of a sour note to succumb to a set piece and a penalty.”

Napa Valley gave FC Davis all it could handle for the game, as the Golden Lions didn’t have many attacking opportunities on 1839 goalkeeper Sucre Herrera. The young netminder was born in 2002 and currently plays for CSU Bakersfield.

One of the first few times Herrera was challenged in the first half was by a long shot from the FC Davis midfield that nearly found its way into the corner of the net. But the ball barely missed the post and went out, leading to a goal kick.

While most of the 1839 FC side is new this season, one familiar face is Francisco “Pancho” Mendoza. The forward has been a staple and mainstay for the club since its 2016 foundation.

Mendoza had an early opportunity, but wasn’t able to push the ball past FC Davis goalkeeper Jonathon Laughlin. The Golden Lions’ netminder played for UC Davis a few years ago. Also with UC Davis roots is FC Davis striker Jacob Rudolph, an attacker who was one of the many weapons for the Aggies this year.

The Golden Lions struck first just before the halftime whistle, as a foul in the box forced a penalty kick by a familiar face — FC Davis team captain Onah Power, who played for Napa Valley in 2019. The midfielder did a stutter step before attempting to bury the ball past Herrera on the right side of the net. Herrera anticipated it correctly and blocked it, but was ruled to have left his line early. Power got a re-kick and the 26-year-old didn’t miss, finding the upper right corner for a 1-0 halftime lead.

Unfazed, 1839 FC continued to apply the strong pressure it had in the first half. Controlling the midfield, Napa Valley finally broke through the FC Davis defense about 12 minutes into the second half. After a failed attack on goal, the ball came to the feet of newcomer Luis Fernando Ramirez. The striker took the ball around the right side of the box, turned on a dime, and struck it with his left foot while dribbling back toward the middle. The quick shot curved perfectly into the top left corner of the net past Laughlin to tie the score 1-1.

“We wanted to flood the midfield and we knew some of their players, so we wanted to get onto them,” Corbett said.

Napa Valley kept up the attack after the equalizer, but couldn’t quite put together a successful second strike. The hosts thought they had the go-ahead goal around the 70th minute, as a counter attack resulted in a ball finding the back of the net. Unfortunately for 1839 FC, the attacker was called offsides. Ten minutes later, another ball got past Laughlin and looked to have found the net but had actually gone wide and found the side netting.

FC Davis didn’t have many opportunities but took advantage of the ones that came its way. A late shot was blocked by Herrera, leading to a corner kick for the Golden Lions. Watching the kick come from the right side, Robles got a head on the ball and placed it perfectly into the back right corner a 2-1 lead in the 85th minute.

Napa Valley attacked the FC Davis goal with shots over the final five minutes and stoppage time, but the Golden Lions went into a full defensive formation and wouldn’t be denied the victory.

Next up for 1839s FC is a trip to Turlock to take on Academica SC at 7 p.m. Saturday, June 12. Academica SC routed the Sonoma County Sol 5-0 in another opener.

“The goals we gave up are easily correctable, it wasn’t like we were getting gashed on defense,” Corbett said. “I am looking forward to next Saturday against Academica in Turlock.”

Stanford swept its NCAA super regional Saturday and locked up a spot in the College World Series.

Napa Valley 1839 FC's Luis Mendoza, right, knocks the ball away from Tyler Moss of FC Davis in the first half Saturday night at Justin-Siena's Dodd Stadium.

Napa Valley 1839 FC got a strong turnout of fans for its season opener against FC Davis on Saturday night at Justin-Siena's Dodd Stadium.

Napa Valley 1839 FC's Luis Ramirez, left, is admonished by a referee before getting a yellow card against FC Davis on Saturday night at Justin-Siena's Dodd Stadium.

Napa Valley 1839 FC's Paris Martins, left, sprints with the ball before getting it deflected by Jaime Robles of FC Davis in the first half at Justin-Siena's Dodd Stadium.