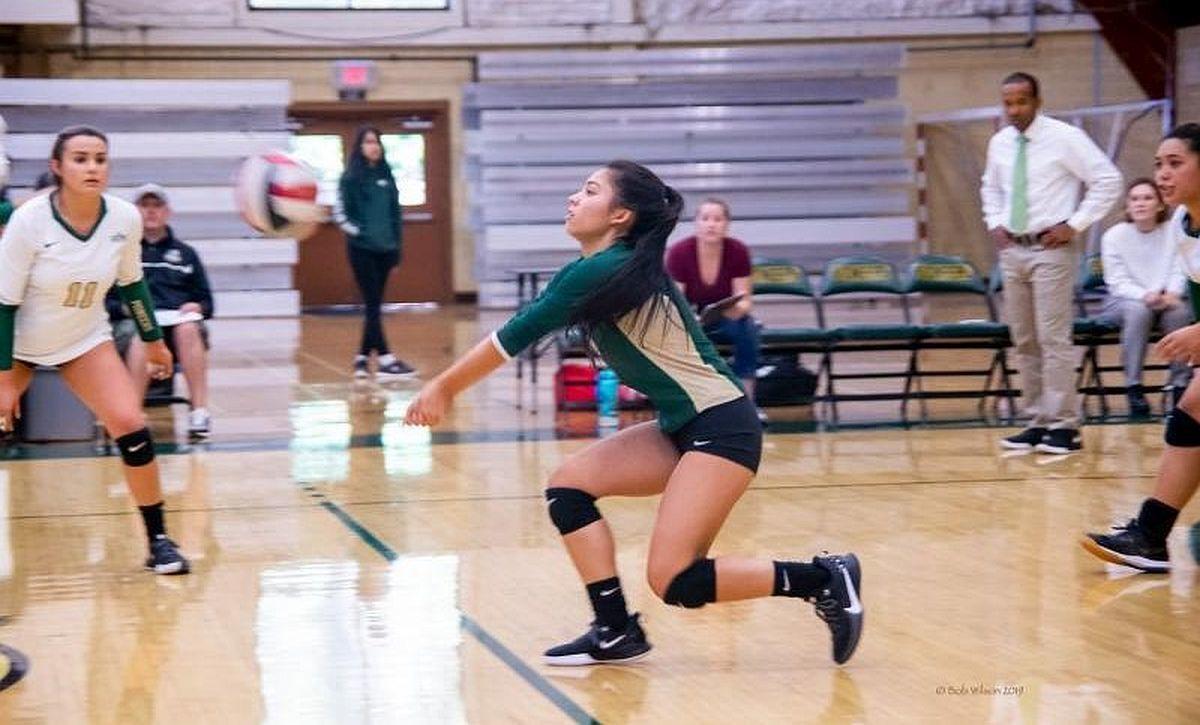 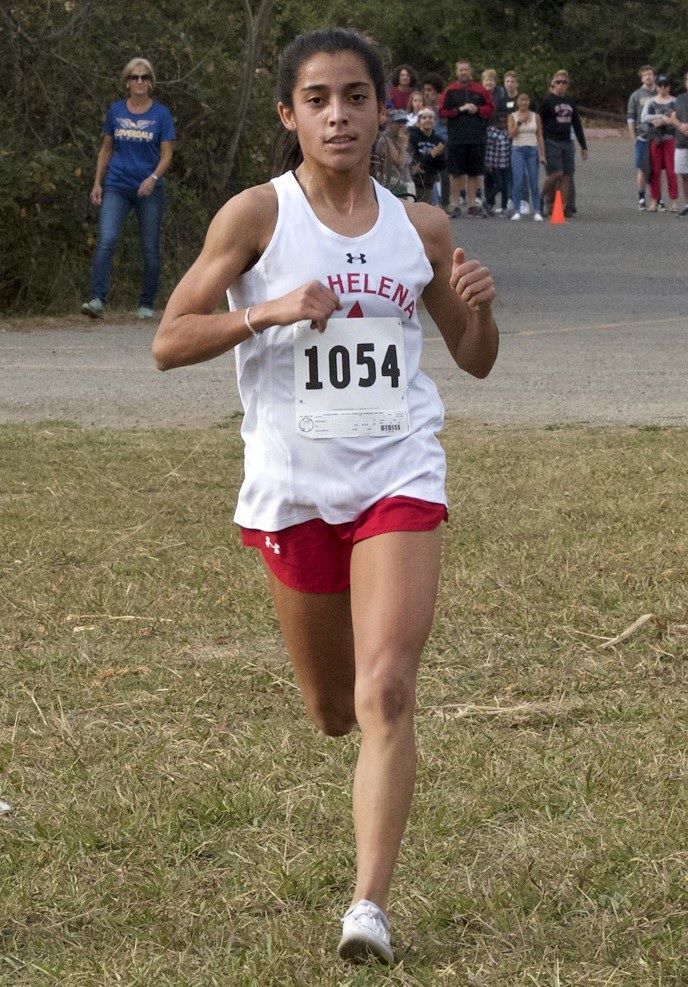 St. Helena High senior Harper McClain has the ninth-fastest time in the state for the girls 3,200 meters.

Pacific Union College sophomore Ashley-Malia Rugnao, a libero/defensive specialist on the volleyball team, was presented with the Presidential Scholar Athlete of the Year award at the annual athletic banquet, the college announced at pioneersathletics.com last month.

Rugnao is from Stockton and went to St. Mary’s High School. She is a pre-nursing major.

“After not being able to hold it last year because of COVID, it was great to be able to recognize this year’s athletes and coaches for all their individual and team achievements,” the report read. “Many athletes from each team received impressive awards for academic achievements as well as awards for their performances during their season.”

Twenty-nine athletes received the Distinguished Scholar Athlete Award for having a cumulative GPA of 3.5 or higher.

Twenty-two athletes received the Scholar Athlete Award for having a cumulative GPA of 3.0 or higher.

“Through this strenuous season because of COVID, our athletes and coaches worked hard to make the best of it. The challenges they had to face this year didn’t prove to be too much for them and seemingly strengthened them as athletes,” the report read.

“We are looking forward to all the goals that will be met, and achievements that will be recognized, after a hopefully more normal year of athletics coming up.”

St. Helena High senior Harper McClain has the ninth-fastest time in the state for the girls 3,200 meters, PrepCalTrack reported on June 14 at its “CIF-State ‘Top 40’ Track and Field Leaders List” at prepcaltrack.com.

The list is compiled by Rich Gonzalez, PrepCalTrack.com editor.

Rico Abreu of St. Helena is 24th in the World of Outlaws points standings through June 13.

“The World of Outlaws features the best drivers in dirt 410 Sprint Car racing,” according to worldofoutlaws.com.

Danko Iordanov, the head coach for men’s indoor and outdoor volleyball at the University of Saint Katherine in San Marcos, Calif. and a former assistant coach at Napa Valley College, has been invited to be part of the coaching staff for the 2021 USA Volleyball National Team Development Program and scouting network, it was reported by uskathletics.com on May 25.

Iordanov’s primary focus will be boys and men’s beach, for ages 15 to 19, uskathletics.com said.

“The NTDP Scouting Network is a fantastic opportunity for young players to be seen and develop into future college and USA beach volleyball stars. I wish something like this existed when I was a young player. I’m extremely excited and honored to be a part of it,” said Iordanov.

Iordanov is a volunteer assistant for the USA Women’s National Volleyball Team.

The University of Saint Katherine is a member of the California Pacific Conference, an NAIA league.

Jason Anthony, a 2001 Justin-Siena graduate who plays out of The Olympic Club in San Francisco, tied for 17th place in the Northern California Golf Association’s 39th Annual Mid-Amateur Championship. It was played June 12-13 at Poppy Hills Golf Course at Pebble Beach.

Anthony, who played on Napa Valley College’s team that won the state title in 2003 at the California Community College Championships at Kings River Golf and Country Club in Kingsburg, shot 75-74 – 149.

Anthony is a Fairfield resident and has twice been honored as NCGA Player of the Year (2017 and 2019).

He continued his college career at Fresno State and was named as the Bulldogs’ MVP.

Julia Sangiacomo, a sophomore outside hitter for the Santa Clara University volleyball team, was named West Coast Conference All-Academic, it was announced at santaclarabroncos.com on June 15.

The 2019 Justin-Siena High School graduate, a biology major, is on the first team.

Sangiacomo, who is from Sonoma, was named first-team All-WCC and was also selected to the AVCA Pacific North All-Region Team, it was announced at santaclarabroncos.com in April.

She was a three-time Napa County Player of the Year. She was selected as the Vine Valley Athletic League Most Valuable Player in 2018 and was named to MaxPreps California Small Schools Second Team All-State in 2017.

Hannah Chau, a Justin-Siena graduate, was named to the 2021 All-Big West Conference women’s track and field team after winning the 10,000 meters for host UC Irvine at the Big West Championships last month at Anteater Stadium.

It was the third-fastest winning time in Big West Championship history, according to a report at ucirvinesports.com.

“Chau, who led from the gun, ran most of the race on her own as she continued to create separation with each lap en route to the 35-second victory,” ucirvinesports.com reported.

Jason Brandow of Napa completed the 2021 baseball season for Cal State Fullerton by hitting .274 with nine doubles, a triple, three home runs and 25 RBIs in 41 games.

Brandow, a junior outfielder, had a .321 on-base percentage and .435 slugging percentage.

Brandow, a Vintage High graduate, was named as the Player of the Year on the Napa Valley Register’s All-Napa County team and was second-team All-State in 2018 as a senior.

Napa’s Juan Lopez-Rios had the game-winning hit with one out in the bottom of the seventh inning for the Eastside Diamond Hoppers in their 2-1 United Shore Professional Baseball League victory over the Birmingham Bloomfield Beavers on June 12 at Jimmy John’s Field in Utica, Michigan.

Lopez-Rios, a Vintage High graduate, batted leadoff and was 2-for-4 with one RBI. He is at shortstop for the Eastside Diamond Hoppers. He also had one assist and two putouts in the game.

The USPBL is an independent league and is based in Utica, Michigan.

This year’s Carpy ’21 Men’s Softball All Star Game and Home Run Derby raised $11,000 for the Boys & Girls Clubs of St. Helena and Calistoga.

St. Helena High senior Harper McClain has the ninth-fastest time in the state for the girls 3,200 meters.