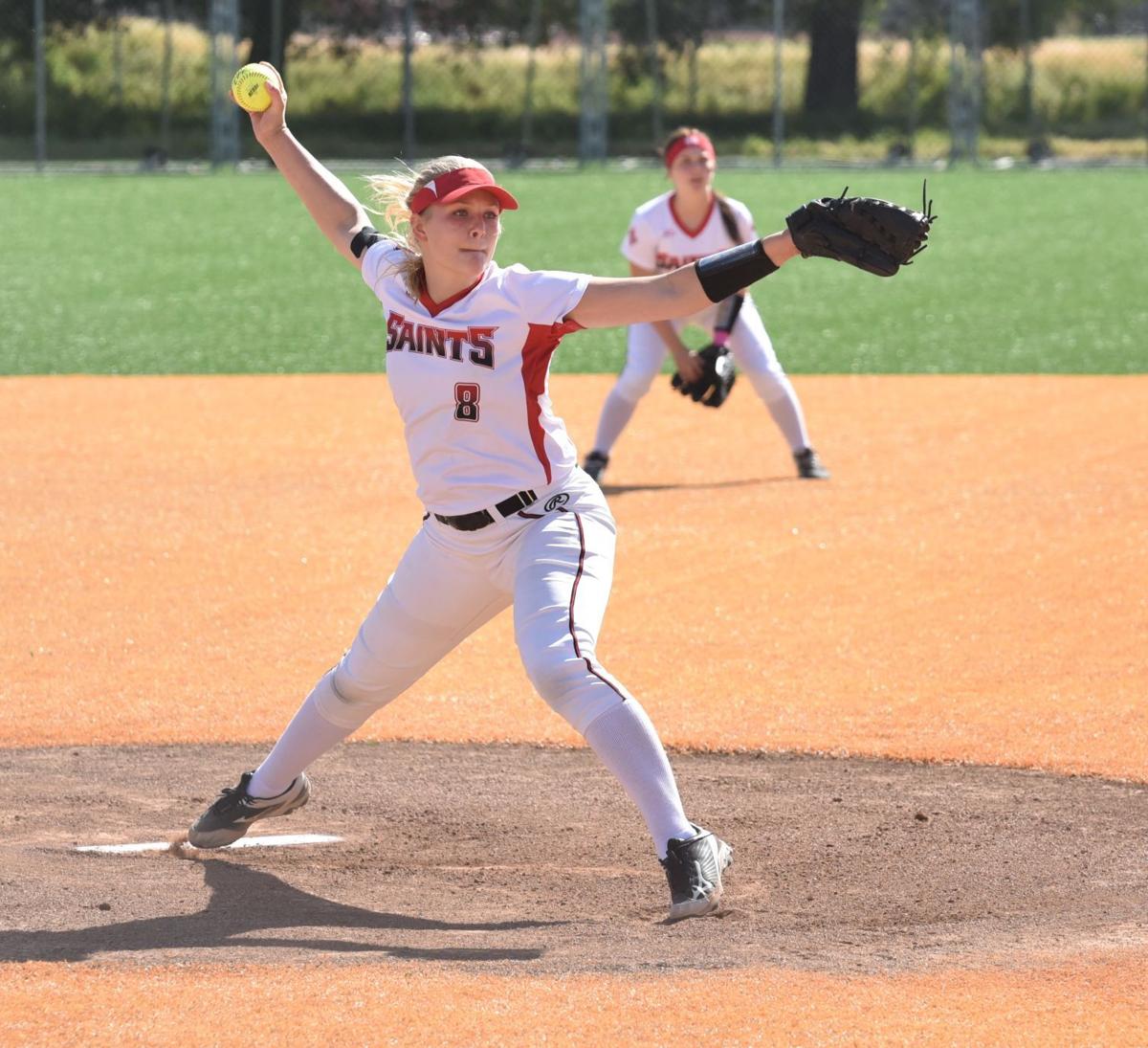 Carter Dahline, shown pitching against visiting Justin-Siena with Skylar Fruetel looking on from second base on April 14, was one of only two seniors on this year's St. Helena High softball team. 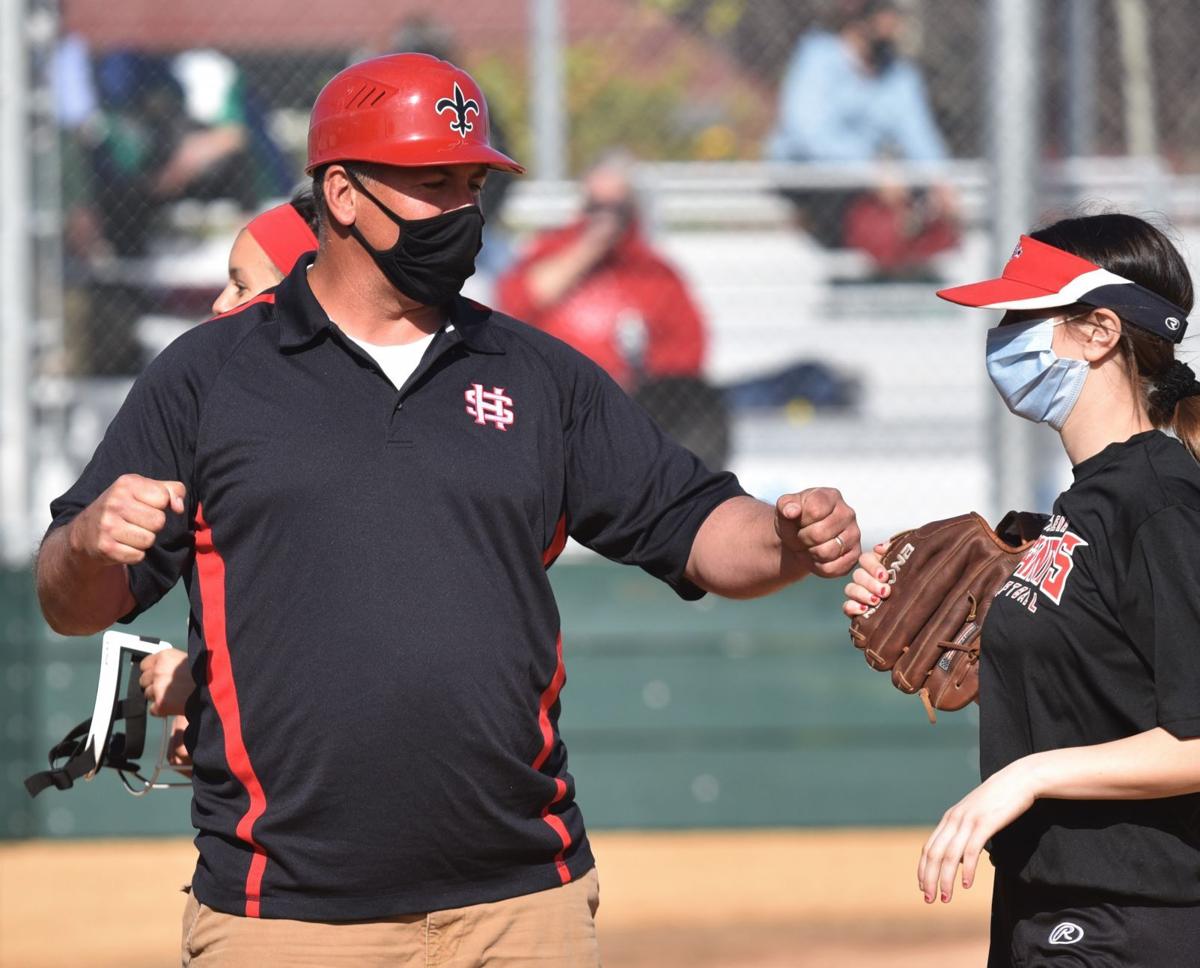 Brandon Farrell, shown talking with a player during a scrimmage against Credo on March 23, had an impressive first full season as St. Helena High softball head coach after stepping down as head coach of the football program after 12 seasons.

St. Helena High School, which went 17-6 during the spring softball season, is No. 9 in the state’s Division V rankings, calhisports.com announced on June 25.

St. Helena won the North Central League I title, going 13-1 and ending the season on a three-game winning streak. The Saints also won nine of their last 10 games.

The Division V rankings, which appear at calhisports.com, are led by No. 1 Fowler (25-1).

It was an outstanding season for the Saints. They had a .306 batting average and .413 on-base percentage, and averaged 7.3 runs and 3.4 stolen bases per game.

Alyvia Fiske, a senior who is on the women’s wrestling team at Simon Fraser University (Burnaby, B.C., Canada), won her division at the 2021 Women’s Nationals in Irving, Texas in May.

She will represent the U.S. U23 women’s freestyle wrestling team at the 2021 U23 World Championships, Nov. 1-7, in Belgrade, Serbia.

As a collegiate wrestler, Fiske finished third at the national championships in 2019 and 2020.

Fiske was named as an All-American at the 2019 Women’s College Wrestling Association Championships.

She was twice named as the Napa Valley Register’s Female Athlete of the Year and compiled a 148-9 record, winning two CIF state championships, during her high school career.

Nathan Bittle, a 6-foot-11 senior center for Prolific Prep of Napa Christian, was recognized by CalHiSports.com in a report on June 22 as among a “quick-hitting list of transfers that impacted the now completed 2020-21 boys basketball season.”

He transferred from Crater High School in Central Point, Ore. to Prolific Prep for his senior season.

Bittle, who averaged 17 points, eight rebounds and three blocks per game, is with the Class of 2021.

Bittle signed a national letter-of-intent to play at the University of Oregon.

He was named Honorable Mention on the 2020-21 MaxPreps All-America Team, maxpreps.com announced on April 13.

He was named to the 2021 McDonald’s All-American Games final roster in February, it was announced at mcdonaldsallamerican.com.

He was named to the 2021 USA Nike Hoop Summit Team, USA Basketball announced.

Jake MacNichols, a senior catcher on the Santa Clara University baseball team who is from Napa, was named All-West Coast Conference All-Academic honorable mention, it was announced on June 18 at www.santaclarabroncos.com.

MacNichols, a Vintage High graduate, is in a master’s program for marketing.

Dan Corral of San Bruno shot a 3-over-par 75 to win the Silverado North Shootout, a US Am Tour event on June 28. It was played on the North Course at Silverado Resort and Spa.

Barry Soicher of Mill Valley and Christopher Goin of Alameda tied for second, each with 78s.

Troy Myers of Brentwood, Rob Farmer of Carmichael and Arshad Khan of Danville tied for fourth, each with 79s.

“The US Am Tour is a nationwide series of amateur golf tournaments open to anyone that wishes to compete on the local, regional, and ultimately national level.”

“Our mission is simple – to provide an unrivaled, immersive, and comprehensive Tour and tournament experience for competitive amateur players of all abilities and ages.”

Samuel Gomez of Napa finished 16th in the boys 16-18 division of the Sacramento County Junior, June 22-23 at Cherry Island Golf Course in Elverta.

Also named as State Teams of the Year, by divisions:

Jin Young Ko wins on LPGA a week after losing No. 1 ranking

THE COLONY, Texas — Jin Young Ko closed with seven straight pars for a 2-under 69 and a one-shot victory Sunday in the Volunteers of America C…

Carter Dahline, shown pitching against visiting Justin-Siena with Skylar Fruetel looking on from second base on April 14, was one of only two seniors on this year's St. Helena High softball team.

Brandon Farrell, shown talking with a player during a scrimmage against Credo on March 23, had an impressive first full season as St. Helena High softball head coach after stepping down as head coach of the football program after 12 seasons.