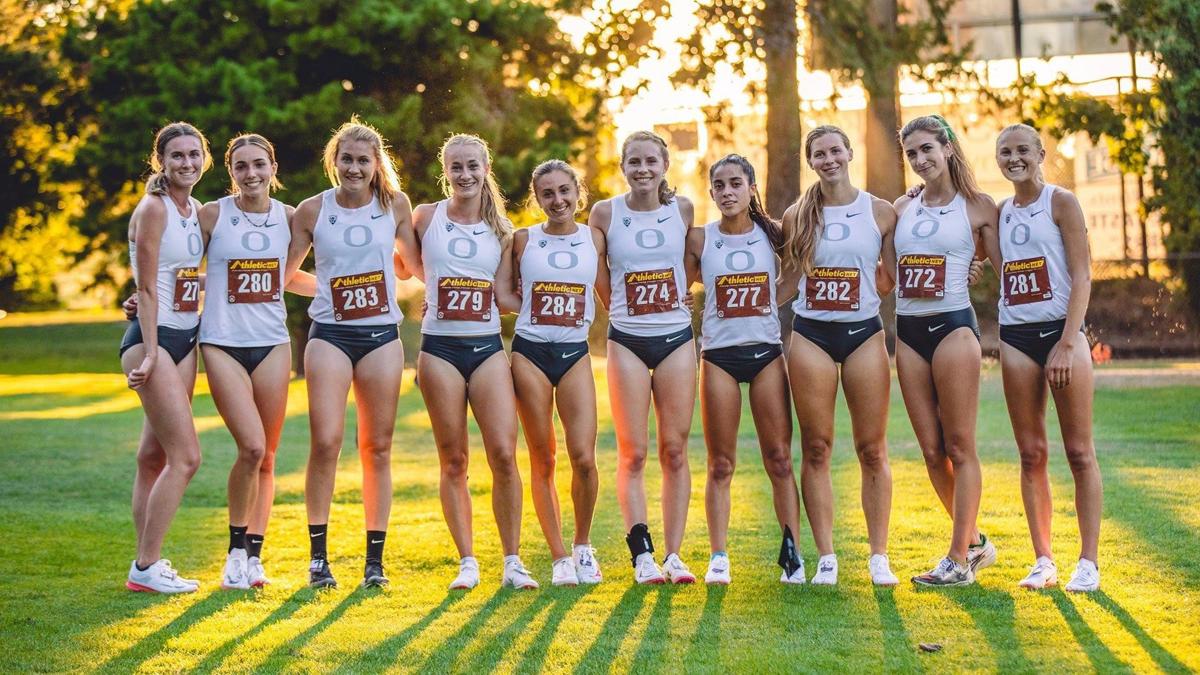 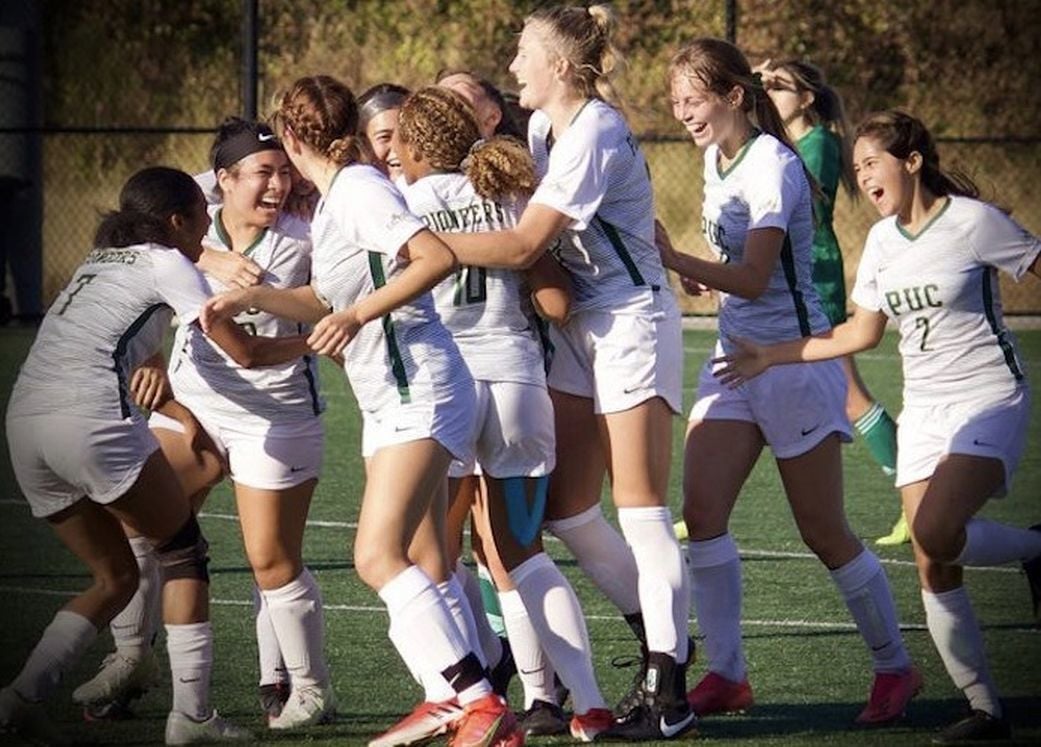 Five-foot-11 freshman Olivia Jessee, third from right, towers over her Pacific Union College women's soccer teammates as they celebrate during a recent match.

Harper McClain, a freshman, took third place for the University of Oregon women’s cross country team as it began the season at the Lewis & Clark Opener on Sept. 1 at Lake Oswego, Ore.

She was also seventh at the 2020 AAU Cross Country National Championships.

August was a great month for Jason Anthony.

Anthony, a 2001 Justin-Siena High School graduate who played golf for the Braves and later Napa Valley College, advanced to the U.S. Mid-Amateur Championship by finishing second in a qualifier at Oakdale Golf & Country Club on Aug. 23. He fired a 4-under-par 68 and was one of four players to move on to Sankaty Head Golf Club, in Siasconset, Mass., and Miacomet Golf Course, in Nantucket, Mass., for the U.S. Mid-Amateur, Sept. 25-30. It’s a U.S. Golf Association event.

He was tied for eighth after a first-round 72 at Schaffer’s Mill Golf & Lake Club in Truckee on Aug. 30. He won it by shooting a 5-under-par 67 in the final round at Whitehawk Ranch Golf Club, located in Clio, on Aug. 31 and then secured the title – his second in a row – on the first hole of a sudden-death playoff.

“Any win is satisfying, especially knowing you only have so many chances,” Anthony, who completed 36-hole regulation play at 3-under 139, said in a report at ncga.org. “NCGA wins are even more satisfying due to the strength of the fields and the venues. Ultimately too though, at the end of the day it’s about the camaraderie.”

Anthony — who played on Napa Valley College’s team that won the state title in 2003 at the California Community College Championships at Kings River Golf and Country Club in Kingsburg — came through with clutch shots late in the second round of the 17th annual event.

He then birdied the first hole of a playoff, sinking a putt from 12 feet, to beat John McCord and Brett Viboch.

He is now tied for seventh on the all-time NCGA win list, the organization said at ncga.org.

“I was really struggling earlier in the year for about three months. I couldn’t break par and was spinning my wheels,” he said. “Ultimately, when I get out on the course and the tourney is on the line, I find a way to get it done. That’s why I love competing.”

He plays out of Green Valley Country Club in Fairfield and The Olympic Club in San Francisco.

He played at Fresno State and was selected as the Bulldogs’ MVP.

The Pacific Union College women’s soccer team has been picked to finish 14th in a poll of California Pacific Conference coaches, the league reported in a story at calpacathletics.com on Aug. 20.

The Pacific Union College men’s soccer team has been picked to finish 14th in a poll of California Pacific Conference coaches, the league reported in a story at calpacathletics.com on Aug. 20.

Issay Bravo of Pacific Union College was named as the Offensive Player of the Week for men’s soccer in the California Pacific Conference, the Cal Pac announced in a report at calpacathletics.com on Sept. 7.

“Issay Bravo of Pacific Union tallied a pair of scores in a 3-2 win against NCAA Division II Academy of Art. The freshman from Stockton has helped the Pioneers to wins in two of their first three matches, giving them the best start in program history,” the Cal Pac said.

Olivia Jessee of Pacific Union College was named as the Offensive Player of the Week in the California Pacific Conference for women’s soccer, the Cal Pac announced in a report at calpacathletics.com on Sept. 7.

“The freshman midfielder from Mount Pleasant, Utah has been a big reason for the first-year program’s 2-1 start,” the Cal Pac said.

Napa High’s Caitlyn Newburn and St. Helena High’s Aribella Farrell were named to 2021 all-state medium schools and small schools for softball by Cal-Hi Sports in a report at calhisports.com on Aug. 25.

Newburn, a junior, was named first-team medium schools as a catcher.

Farrell, a sophomore, was named second-team small schools as a pitcher/multi-purpose player.

Caitlyn Newburn, a junior catcher for the Napa High softball team, was named first team 2021 all-state underclass by Cal-Hi Sports, it was announced in a report at www.calhisports.com on Aug. 19.

Nicholas Young of Napa won the boys 16-18 division title of the Foxtail Junior Championship in July.

Young fired a 3-over-par 74 in the Junior Golf Association of Northern California event on the South Course at Foxtail Golf Club in Rohnert Park.

Hannah Chau, a junior, finished third overall and set a 4,000-meter school record for the UC Irvine women’s cross country team at the Anteater Opener on Sept. 1 at the ARC Fields in Irvine.

Julia Sangiacomo is off to a very good start as a junior outside hitter for the Santa Clara University volleyball team.

Sangiacomo, a Justin-Siena graduate who is from Sonoma, has 61 kills on a .244 attack percentage, 28 digs, five service aces, two block assists and 67 points.

Santa Clara has played in the Oregon Invitational at Matthew Knight Arena in Eugene, Ore., and the Aggie Invitational in Davis.

In his first season as the team’s manager, Kris Negron of Napa has the Tacoma Rainiers at 63-44 and in first place in the Triple-A West Division.

Tacoma is the Triple-A affiliate of the Seattle Mariners.

Negron retired after the 2019 season.

Negron has been in professional baseball the last 15 years. He was selected by the Boston Red Sox during the seventh round of the 2006 draft.

The #4 seeded Olive Oilers took two straight games over the #2 seeded Paisans in their final match of the season to claim the 2021 St. Helena Bocce Championship.

Five-foot-11 freshman Olivia Jessee, third from right, towers over her Pacific Union College women's soccer teammates as they celebrate during a recent match.