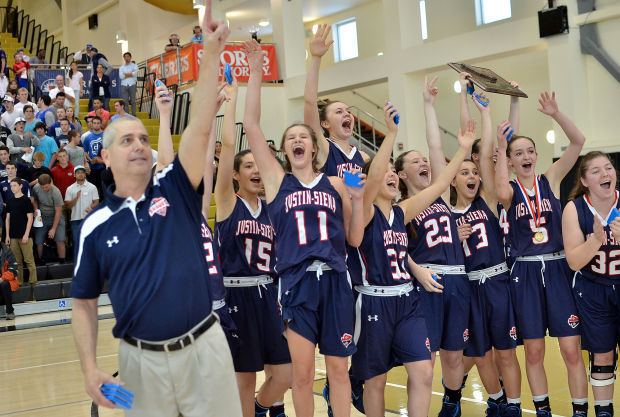 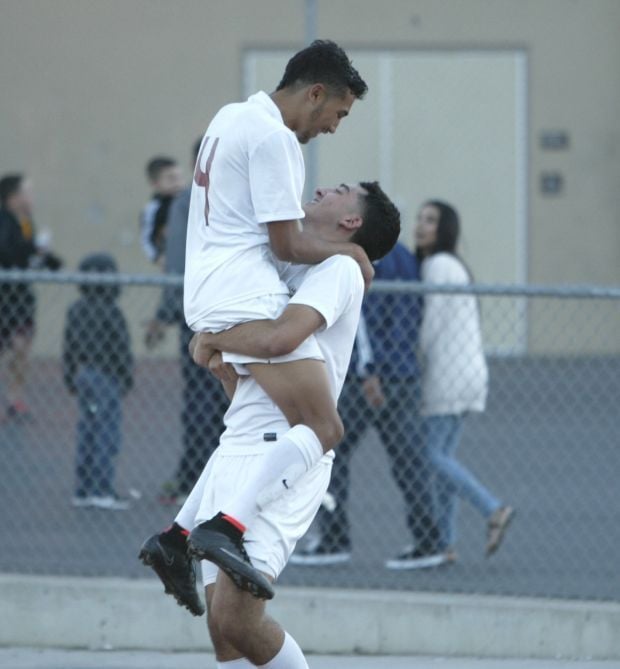 Marco Manzo, who scored during regulation, is hoisted by Vintage High soccer teammate Jesus Ochoa, who scored the winner in overtime, as they celebrate their team's first section title 10 years, 2-1 over Merced, in November 2014 at Cosumnes High in Elk Grove. 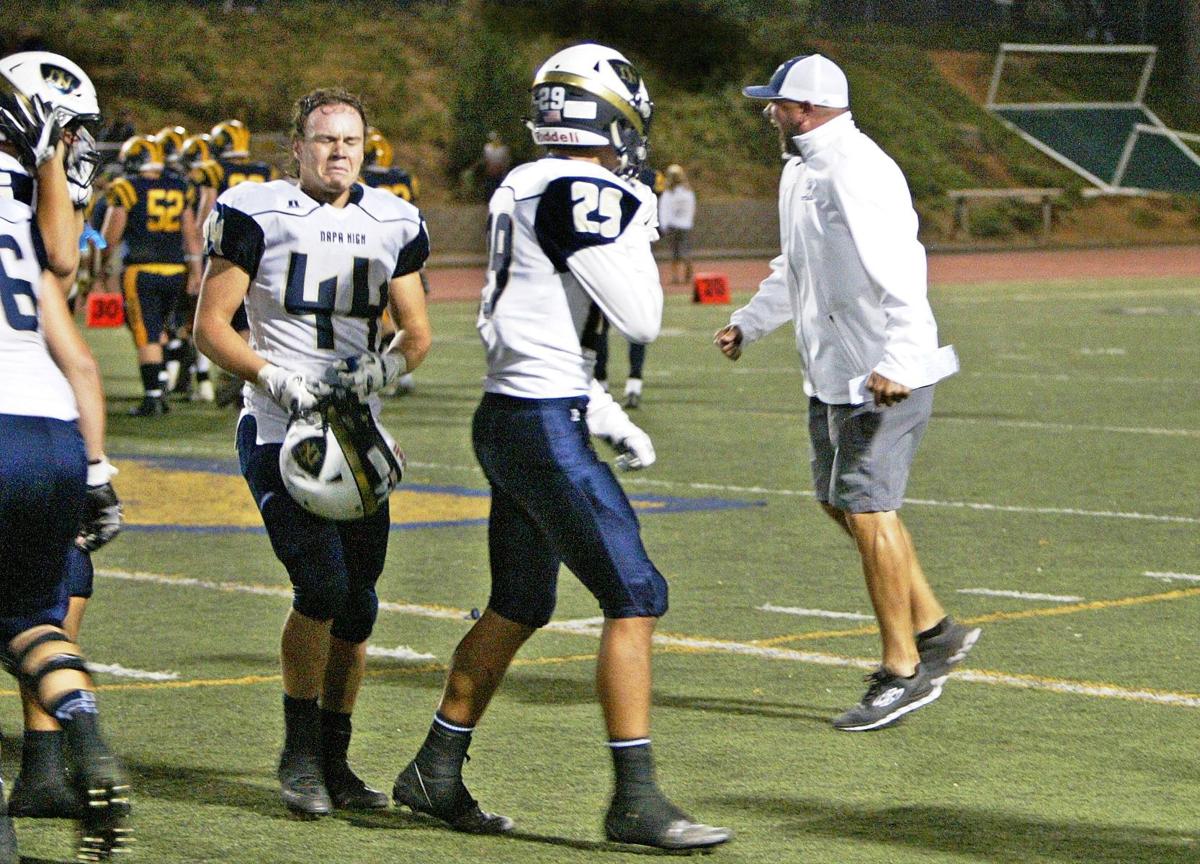 Napa High running back Kale Olmstead (44) cries tears of joy as head coach Troy Mott joins the celebration after a 35-34, triple-overtime victory over Nevada Union in Grass Valley on Sept. 16, 2016. 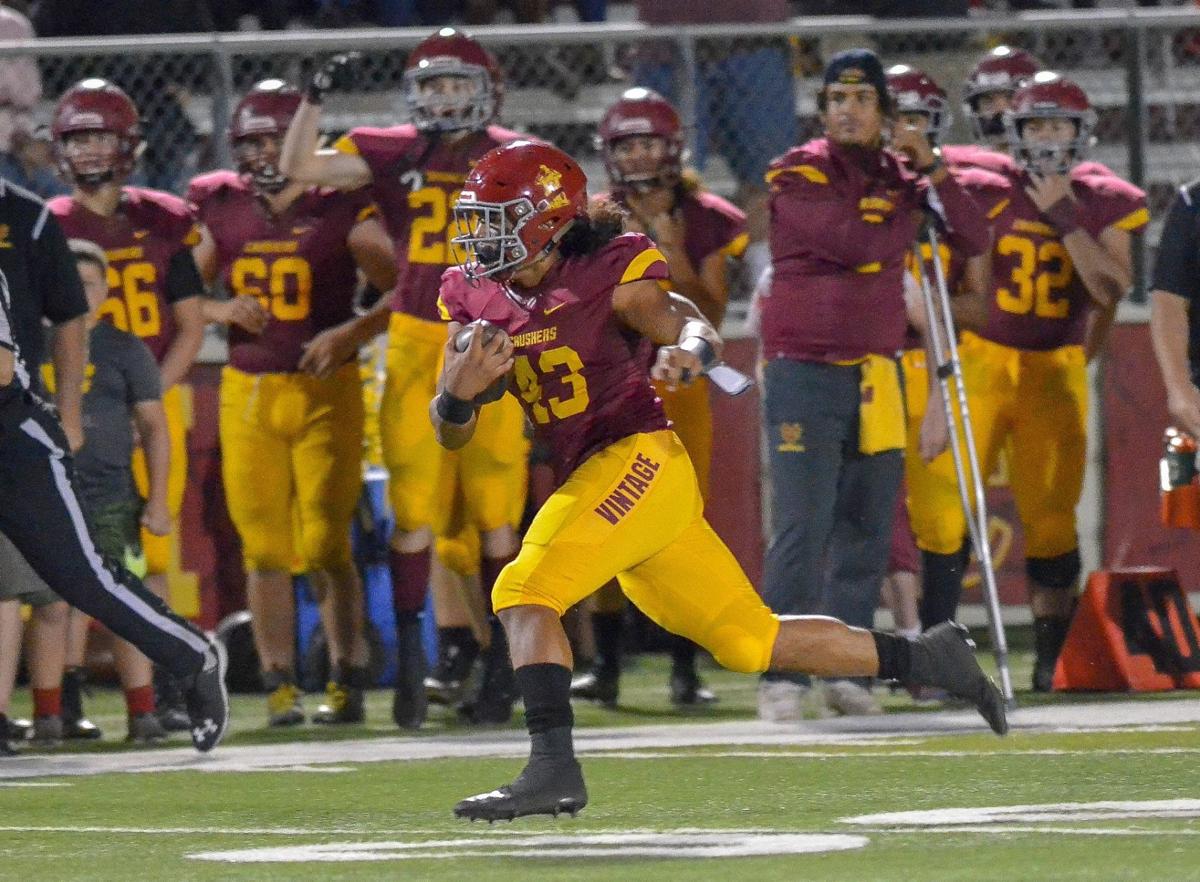 Vintage's Viliami Schaumkel rushed for 115 yards and four touchdowns during the Crushers' first playoff win in 32 years on Nov. 2, 2018 against James Logan.

The opening of a revamped Napa Memorial Stadium in the fall of 2010 ushered in a decade of huge moments in Napa County sports history.

Here are 10 of those moments from the decade that followed.

The Braves, after losing to eventual champion Saint Mary’s in the North Coast Section Division IV semifinals, earned the No. 5 seed in the Northern California Division IV playoffs and rolled to the championship. They beat No. 12 Colfax 49-40 in their opener at home, No. 4 West Campus 51-36 in a quarterfinal in Sacramento, No. 1 Scotts Valley 81-68 in a semifinal in Santa Cruz County, and No. 2 Arcata 47-26 in the final at American Canyon.

That put Justin-Siena in the state championship game for the first time since 1985, against Sierra Canyon at Sleep Train Arena in Sacramento. The Trailblazers from Chatsworth ended the Braves’ 29-7 season by handing them a 64-37 loss.

Thirty-four years after its last tournament at Silverado Resort and Spa, the PGA Tour returned with the Frys.com Open in its season-opening slot. South Korea’s Bae Sang-Moon won the first one and Argentina’s Emiliano Grillo won the second. Since the tournament was renamed the Safeway Open in 2016, only Americans have won – Brendan Steele in 2016 and 2017, Kevin Tway in 2018 and Cameron Champ this year. The tournament has many well-known players in its fields, including Phil Mickelson.

Jeremy Russotti and Philippe Doherty started the Napa-based Prolific Prep Academy for elite boys basketball players with a schedule of about 30 games, including some games at Napa Valley College but most in weekend tournaments around the country.

The first team was built around 6-foot-6 wing Josh Jackson, who led Consortium College Prep of Detroit to a Michigan state title the previous winter. Jackson went on to play one season for Kansas before declaring for the 2017 NBA draft, where he was selected fourth overall by the Phoenix Suns. He was traded this past July to the Memphis Grizzlies, who have assigned him to their G League affiliate, the Memphis Hustle.

Another Prolific Prep standout, Gary Trent Jr., played one season for Duke before getting drafted in June 2018 by the Sacramento Kings and traded to the Portland Trail Blazers, who assigned him to their G League affiliate, the Texas Legends.

Seeded No. 4 despite a 15-1-3 record going in, they opened the postseason by beating No. 13 Rocklin 1-0 in a penalty-kick shootout, No. 5 Stagg 1-0 on Ochoa’s second-half header goal off an Aldair Diaz direct kick, No. 1 Atwater 1-0 on an Ochoa penalty kick, and No. 6 Merced for the title, 2-1, on goals by freshman Marco Manzo in regulation and Ochoa in overtime.

Alyvia Fiske was absolutely perfect for Vintage High School during the 2016-17 girls wrestling season. Undefeated. No points allowed. State champion for the second year in a row.

She went 36-0 with 32 pins in the 160-pound weight class. She won her second consecutive 160-pound title at the CIF State Championships in February at the Visalia Convention Center.

She signed a national letter-of-intent with Simon Fraser University of Burnaby, British Columbia, Canada, and has been wrestling for the Clan on an athletic scholarship.

Fiske was twice named as the Napa Valley Register’s Female Athlete of the Year and compiled a 148-9 record, winning two CIF state championships, during her career at Vintage.

Troy Mott, the winningest head football coach in Napa High School history, resigned after leading the program for 11 years. The football program was rocked by allegations of hazing by players over at least two years and Mott’s assistant coaches were told they would have to reapply for their jobs.

Mott’s departure came after what he described as “varying philosophies” on the future of the program between him and the administration. He disagreed with the rehiring process for the seven coaching staff positions. Mott’s career record at Napa was 94-35 with five Monticello Empire League titles and the 2007 Sac-Joaquin Section Division I championship. The program missed the playoffs for two seasons before Richie Wessman took over in 2019 and guided the Grizzlies to a second-place finish in the VVAL and a playoff berth.

Napa High and Vintage were approved to move to the North Coast Section for the first time in 42 years starting with the 2018-19 school year. American Canyon also moved over from the Sac-Joaquin Section and Justin-Siena, which made the move in 2000, were put in the new Vine Valley Athletic League with Napa and Vintage.

The move has proved beneficial for the Vintage boys soccer, Justin-Siena girls tennis, Napa High boys basketball and Vintage football programs, none of which have lost in the VVAL yet.

Daryl Horn, 50, and his youngest son, Joe, an eighth-grade student at Redwood Middle School, and two others died when the vehicle that they were in was involved in a hit-and-run crash in San Pablo. Daryl Horn’s brother-in-law, Troy Biddle, and Daryl’s nephew, Baden Biddle, from Bainbridge Island, Washington, were also killed in the five-vehicle crash, which occurred on Interstate 80 at the San Pablo Dam Road exit.

Jared Horn, named as the Napa County Male Athlete of the Year in August of 2016 and the All-Napa County Player of the Year for baseball in July of 2016, was the only survivor of the wreck.

Daryl Horn was a three-sport star at Novato High School and a baseball standout at the College of Marin and Sacramento State for two years. He was highly respected for his work with Napa Little League, the Napa Valley Baseball Club, CYO and Napa Parks and Recreation youth basketball.

Joe, an honor-roll student with a perfect 4.0 GPA, had recently been selected as an all-star for his Napa Saints youth football team at the center position.

Napa Valley 1839 FC, a men’s amateur soccer team, played its inaugural season in the National Premier Soccer League’s Golden Gate Conference in 2017 and finished 1-6-5. The NPSL is recognized as a fourth-tier league.

Jesus Medina was 1839 FC’s first head coach and has since been succeeded by Rogelio Ochoa.

The Napa Silverados begen their first season in the Pacific Association of Professional Baseball Clubs, an independent league based in Northern California, in June 2018.

The Crushers had won league titles since their last section championship in 1986, but not playoff games. That all changed after they went 7-0 in the new VVAL and were seeded No. 8 in the North Coast Section Division I playoffs. They hosted No. 9 James Logan of Union City and rolled to their first playoff win in 32 years, 36-0, at Memorial Stadium.

Led by VVAL Player of the Year Viliami Schaumkel, the Crushers started a new streak the next week with a 24-21 double-overtime upset at No. 1 Antioch. Because of smoky air that had drifted south from the Camp Fire in Paradise, it was three weeks before Vintage played its semifinal at No. 4 seed San Ramon Valley in Danville. With several key starters out injured, the Crushers fell 14-3, their 10-game win streak and 10-3 season coming to an end.

One late-season practice changed everything for Justin-Siena's baseball team

It was late in the Marin County Athletic League season and the Justin-Siena High School baseball team was in a tailspin. Back-to-back losses t…

STOCKTON – The Napa softball team was the little No. 8 seed that could.

Marco Manzo, who scored during regulation, is hoisted by Vintage High soccer teammate Jesus Ochoa, who scored the winner in overtime, as they celebrate their team's first section title 10 years, 2-1 over Merced, in November 2014 at Cosumnes High in Elk Grove.

Napa High running back Kale Olmstead (44) cries tears of joy as head coach Troy Mott joins the celebration after a 35-34, triple-overtime victory over Nevada Union in Grass Valley on Sept. 16, 2016.

Vintage's Viliami Schaumkel rushed for 115 yards and four touchdowns during the Crushers' first playoff win in 32 years on Nov. 2, 2018 against James Logan.