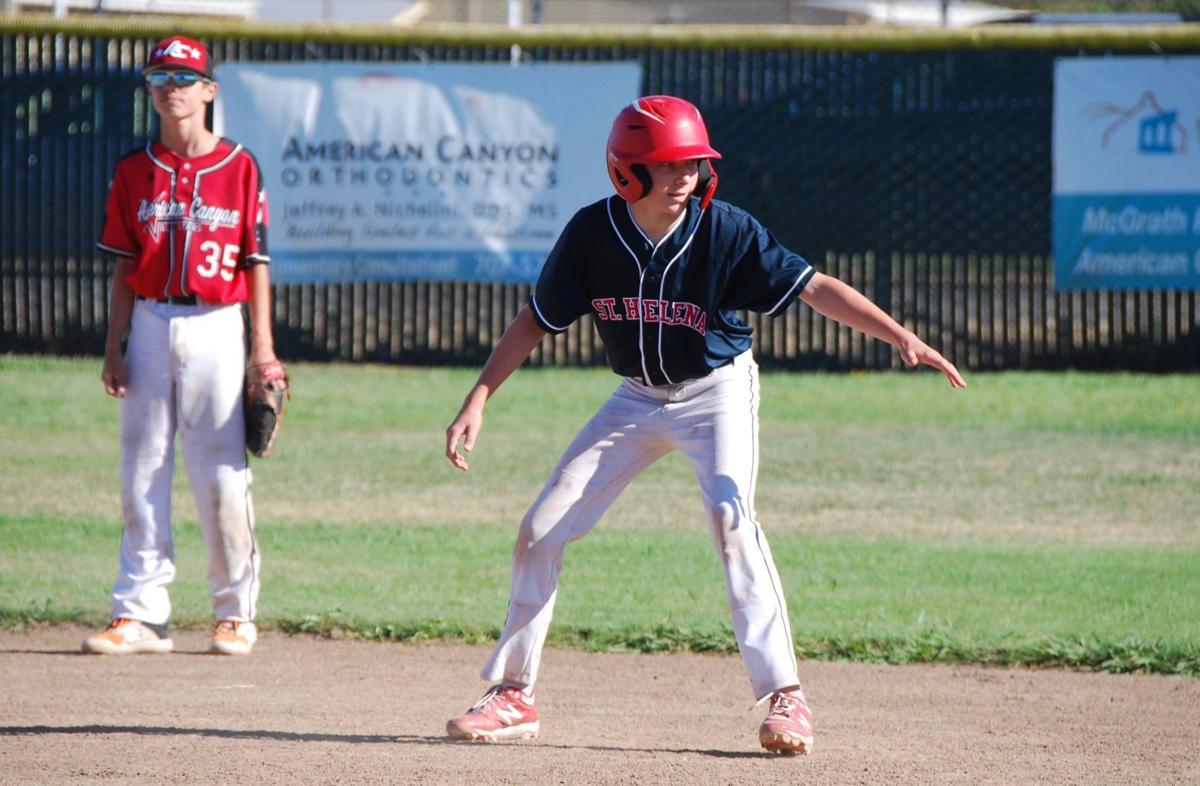 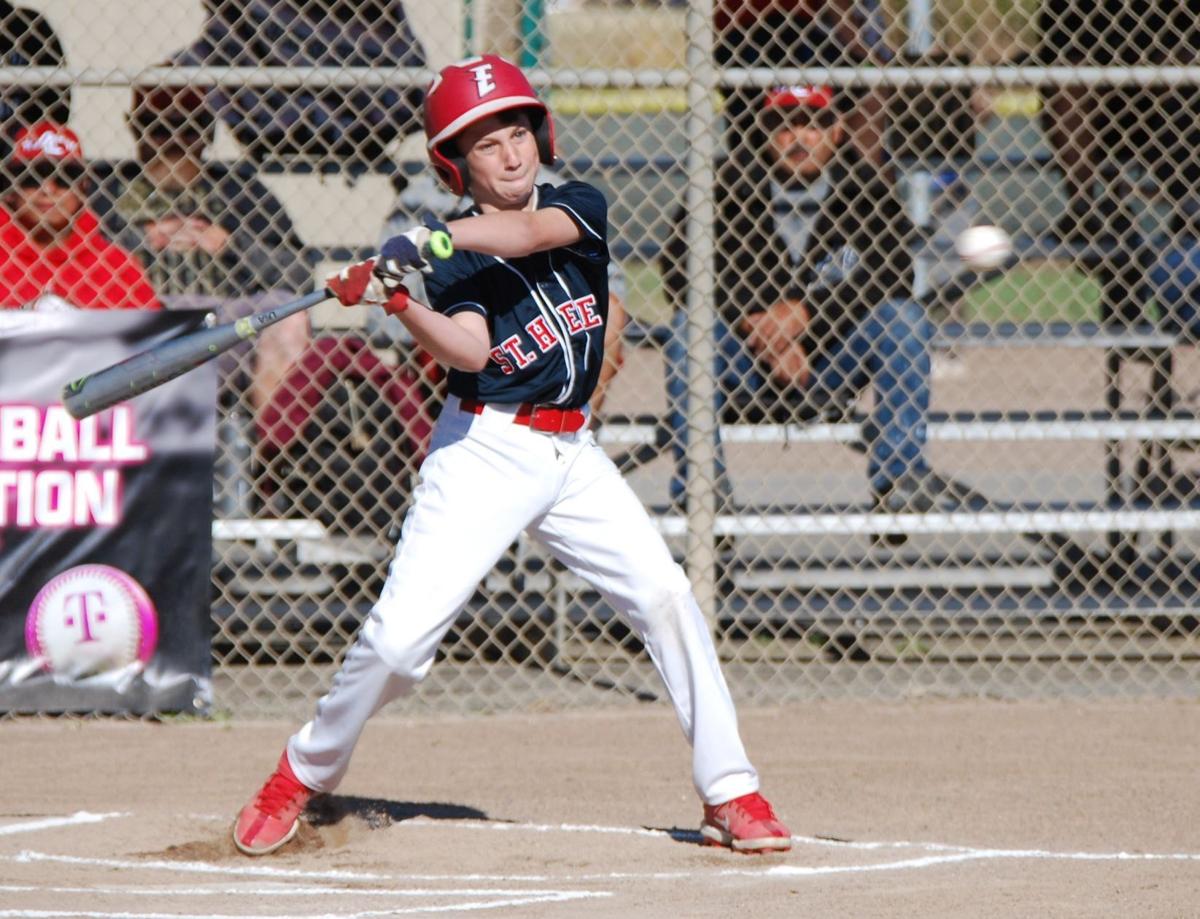 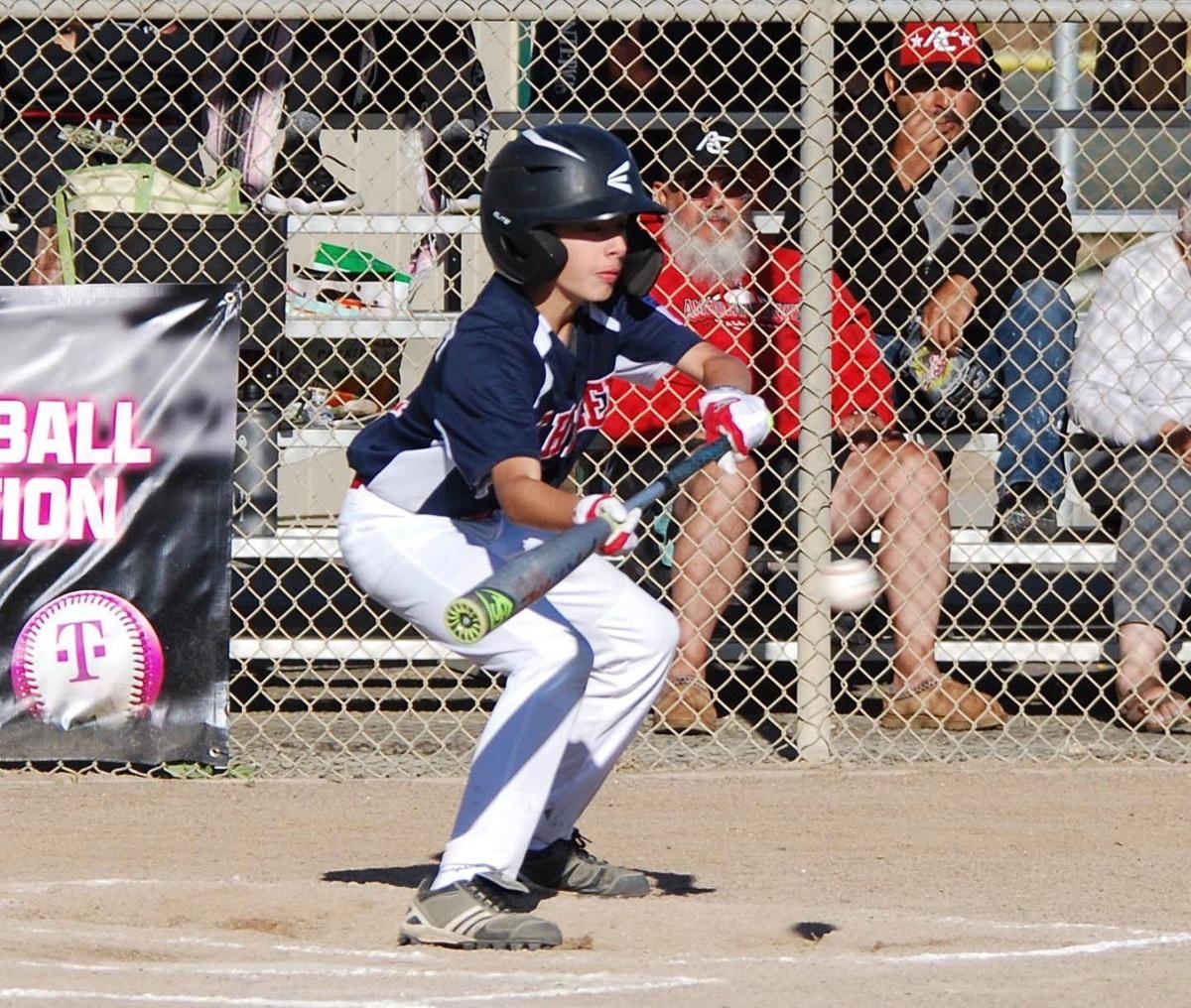 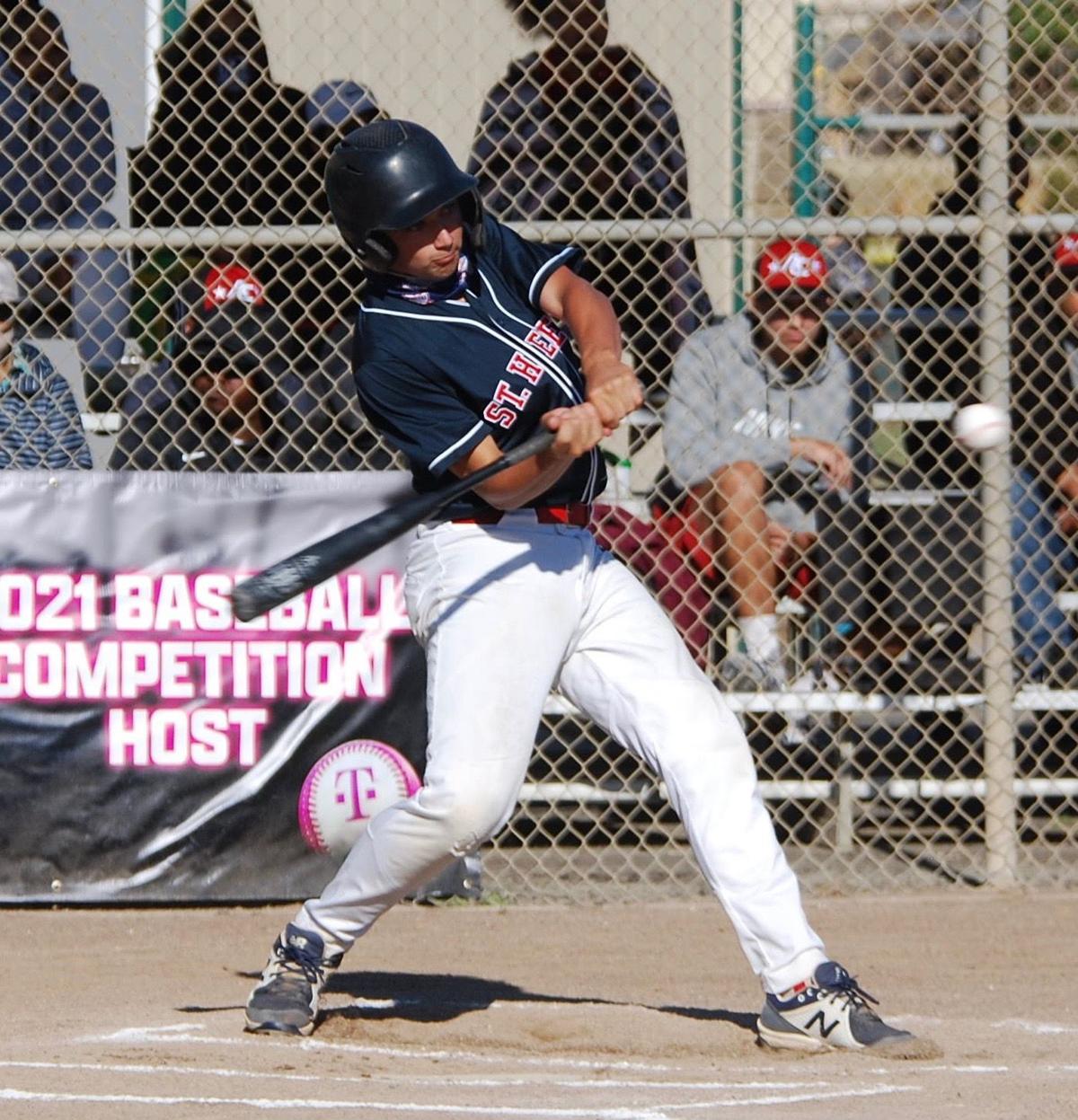 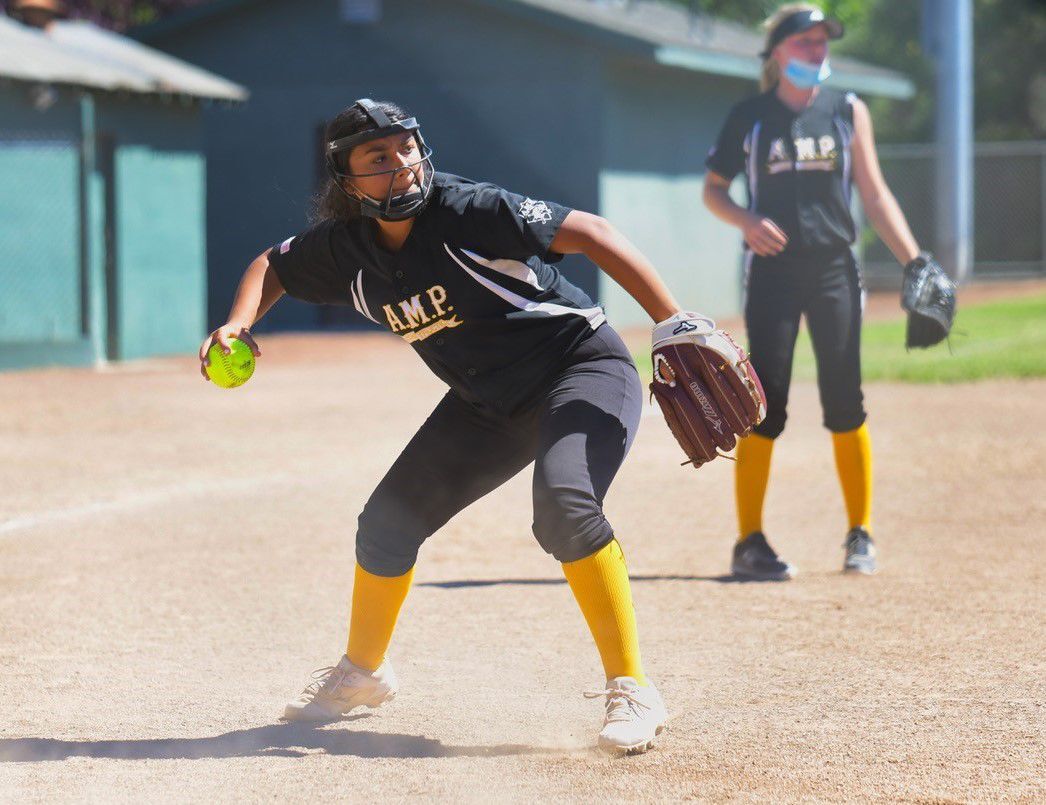 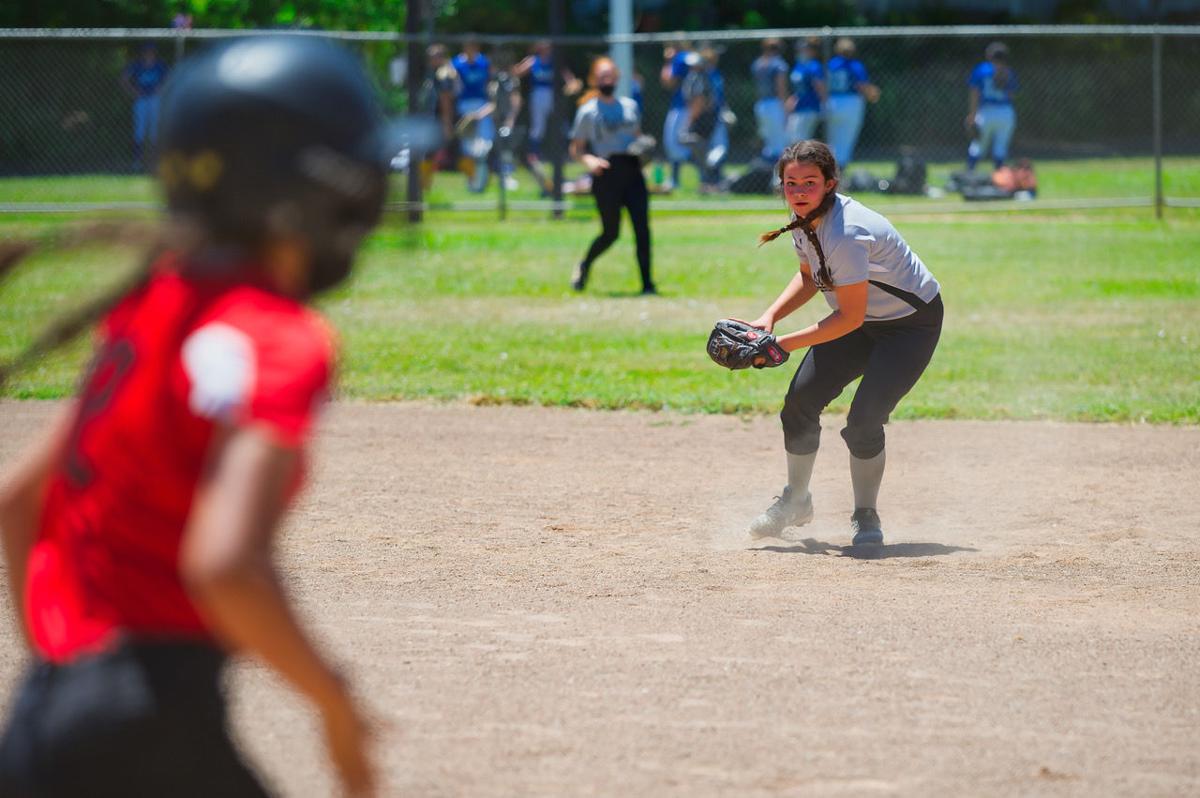 Binstock Enterprises infielder Riley Brodie stares down a Soscol Auto Body batter before throwing her out on June 13. 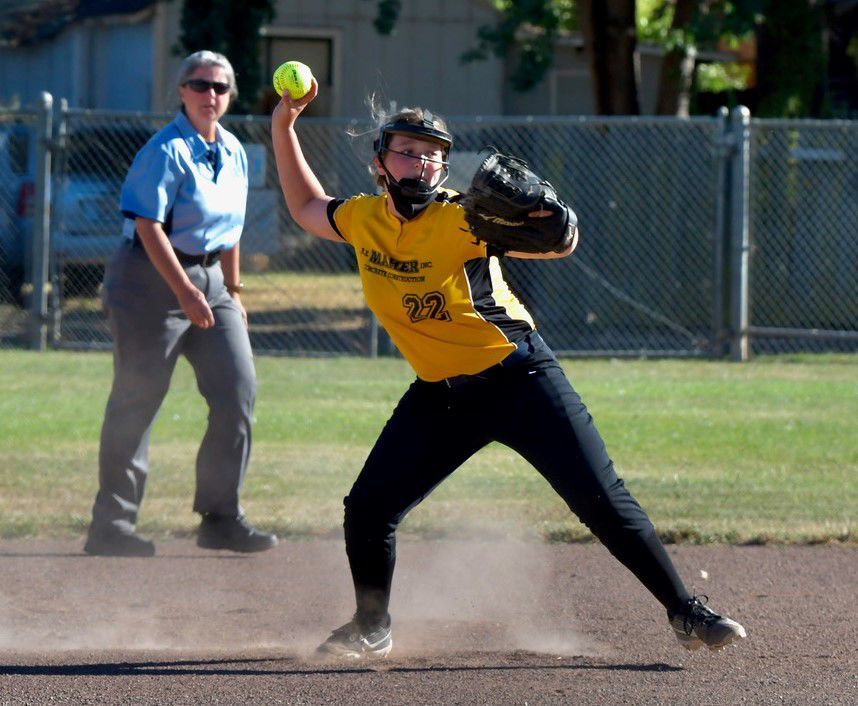 St. Helena Little League’s 13-year-old Intermediate All-Stars defeated host American Canyon, 9-3, in the second championship game on Wednesday to become only the second team from the town to a District 53 championship since it joined the district in 1973.

The first district title by a St. Helena team was in 2015 by a 9-10-Year-Old team that included current St. Helena High School varsity players Thomas Herdell and Miles Harvey, whose brothers are on this year’s Intermediate squad.

“It’s an old cliche, but this was truly a team win. Every player on this team made key contributions to the success of this team,” St. Helena manager Jeff Blaum said. “I’m so happy for this group.”

Three years ago, these 13-year-olds became only the third St. Helena team to win multiple games in the district tournament as 10-year-olds. Last year, the COVID-19 pandemic wiped out what would have been their last Major Division season.

“Last year was the culmination of their Little League career at Crane Park. That was heartbreaking for these kids,” Blaum said. “To come back this year and do something this special is such a great reward for them.”

The Intermediates hosted their first two games of the tournament at Carpy Field, downing Suisun 8-5 on June 19 and Benicia 19-8 on June 20. Also at Carpy that weekend, American Canyon lost 7-3 to Benicia and beat Suisun 21-14.

Against Benicia, Kelly, Anderson and Blaum gave up 10 hits between them but struck out 10 and walked only 5. It was 5-5 after three innings, but St. Helena scored 5, 4, 2 and 3 runs in the remaining innings.

American Canyon hosted the rest of the double-elimination tournament, continuing its comeback by beating Benicia 12-3 in Monday’s losers-bracket final before stunning St. Helena 11-9 in the first championship game on Tuesday. St. Helena led 7-0 midway through the second inning and 9-2 halfway through the fourth, when American Canyon responded with six runs. The hosts tied it in the fifth and scored twice in the sixth to win.

“We won a couple good games at Carpy and felt really good about ourselves. Then we went to American Canyon a got a big lead, but things didn’t work out,” Coach Blaum said. “Royce Hall pitched brilliantly against us in a relief role and their team kept battling. Their crowd was loud and raucous and it would have been easy for us to give in at that point. It would have been understandable to lose focus.

“In our team talk after that loss, I saw in the kids’ faces a determination that we’d be back the next night and play our game,” Coach Blaum said.

In the championship rematch, Kelly pitched the first four innings and allowed all three runs on only four hits and five walks while striking out seven. Blaum pitched two hitless shutout innings of relief.

“Elias Kelly pitched an amazing game and even though we missed some early chances, our hitters eventually came through,” said Coach Blaum. “We got help from up and down the lineup with the eighth-hole hitter, Dean Sommer, igniting the team with a couple early hits and an crucial home run. Charlie Blaum has always been the end-of-game pitcher for this team and pitched a perfect final two innings to close out the tournament.”

The team will begin play in the Section 1 Tournament on Friday with a 5:30 p.m. game against the District 64 champion from the Dixon area at Mark West Youth Club Little League in Santa Rosa.

In Napa Valley Girls Softball Association action at Kiwanis Park on Tuesday night, A.M.P. came back to win the Senior Division game in the opener.

Conwell took a 1-0 lead when Jordan Allen (1 for 2) walked to open the game, Camila Barbosa (1 for 3) singled, Clare Halsey (1 for 1) was hit by a pitch to load the bases, and Jaclyn Perez (1 for 2) singled in Allen. Barbosa tried to score on the play but was thrown out on the relay by Ava Moreci, playing second base.

Conwell had only one baserunner the rest of the game off A.M.P. pitcher Dessiana Garcia — Allen on a fifth-inning single, and she was stranded at second.

Halsey, who pitched a six-hitter with 6 strikeouts and 5 walks, retired A.M.P. in order in the bottom half. But A.M.P. took a 3-1 lead in the second after loading the bases on a double by Xitlali Mora (1 for 2) and walks to Dessiana Garcia and Ally Warren. The runners came in on a sacrifice fly by Ella Johnson and a two-run single by Diana Garcia (1 for 2).

Helena Tarlton (1 for 2) singled to open A.M.P.’s third and was thrown out trying to make it a double, but Taylor Lauritsen (2 for 3) and Kelsey Lauritsen (1 for 3) followed with singles and eventually scored on errors. Taylor Lauritsen added a two-run single in the fifth.

Tuesday’s later game was in the Major Division and it was crazy, and not just because Binstock won with only eight players.

Binstock scored twice in its first at-bats after its first two batters were retired — including Ava Cortez, was thrown out trying to stretch a single into a double to open the game. But Angie Rubalcava (4 for 4, RBI) singled and scored when Noleen Cichon hit into an error and Cichon scored on a single by Ava Raines (1 for 1, 4 RBIs).

Maher tied 2-2 in the second when Nicki Haubold (1 for 1) and Caylee Rawdon (RBI) walked and scored on an error off the bat of Kayleen Parra (three RBIs).

No matter for Binstock, which answered with nine-spot in the third, getting a two-run single from Aby Sims (1 for 4), a triple and single from Rubalcava, and RBI singles from Clara Gunning (1 for 3), Cichon (1 for 2) and Cortez (3 for 3) — only to give up seven Maher runs in the bottom of the third. Maher got two singles from relief pitcher Noelle Rofkahr (2 for 3), including a two-run knock, and a single from Haubold and six walks in that frame.

But after Binstock added four runs in the top of the fourth on four hits, including a two-run single by Riley Brodie, Rubalcava struck out the side in the bottom half to get the win in relief of Estrella Bautista.

SPONSORED: Support local news coverage and the people who report it by subscribing to the Napa Valley Register. Special offer: $1 for 6 months…

Binstock Enterprises infielder Riley Brodie stares down a Soscol Auto Body batter before throwing her out on June 13.