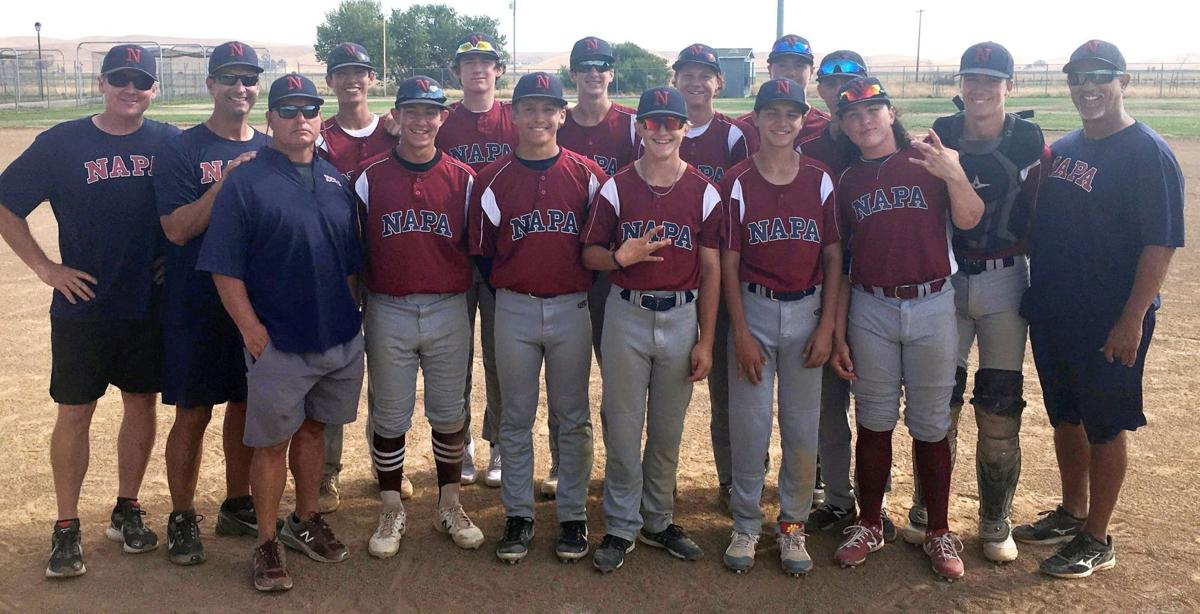 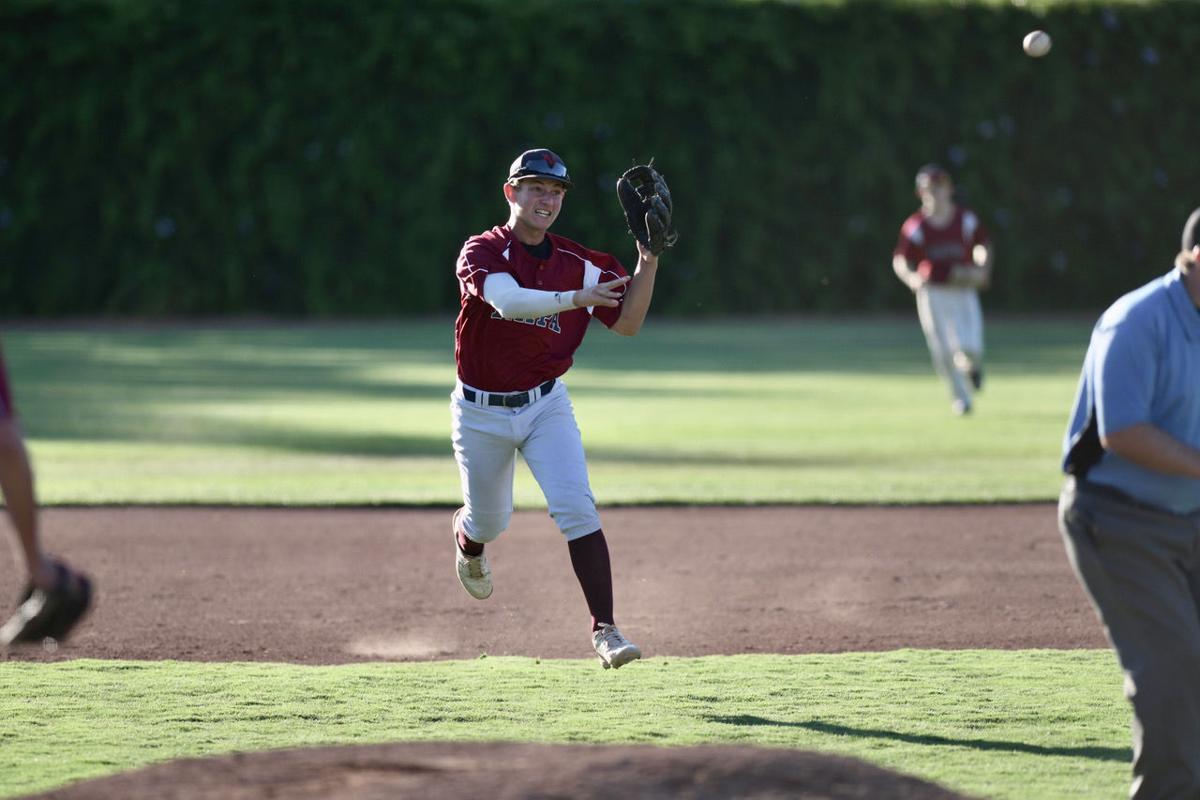 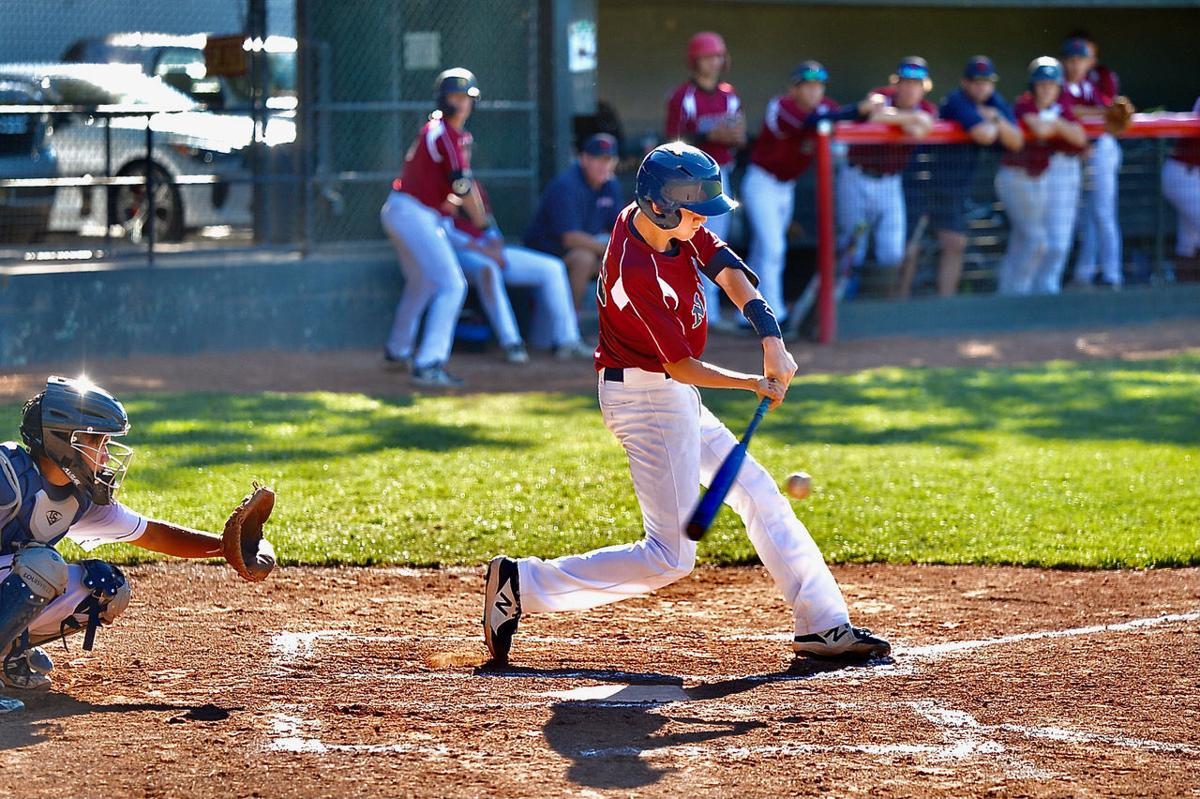 Miles Tenscher of Napa Valley Baseball Club's 15U team gets a hit against the Napa Crushers on June 22 at Cleve Borman Field in Yountville. 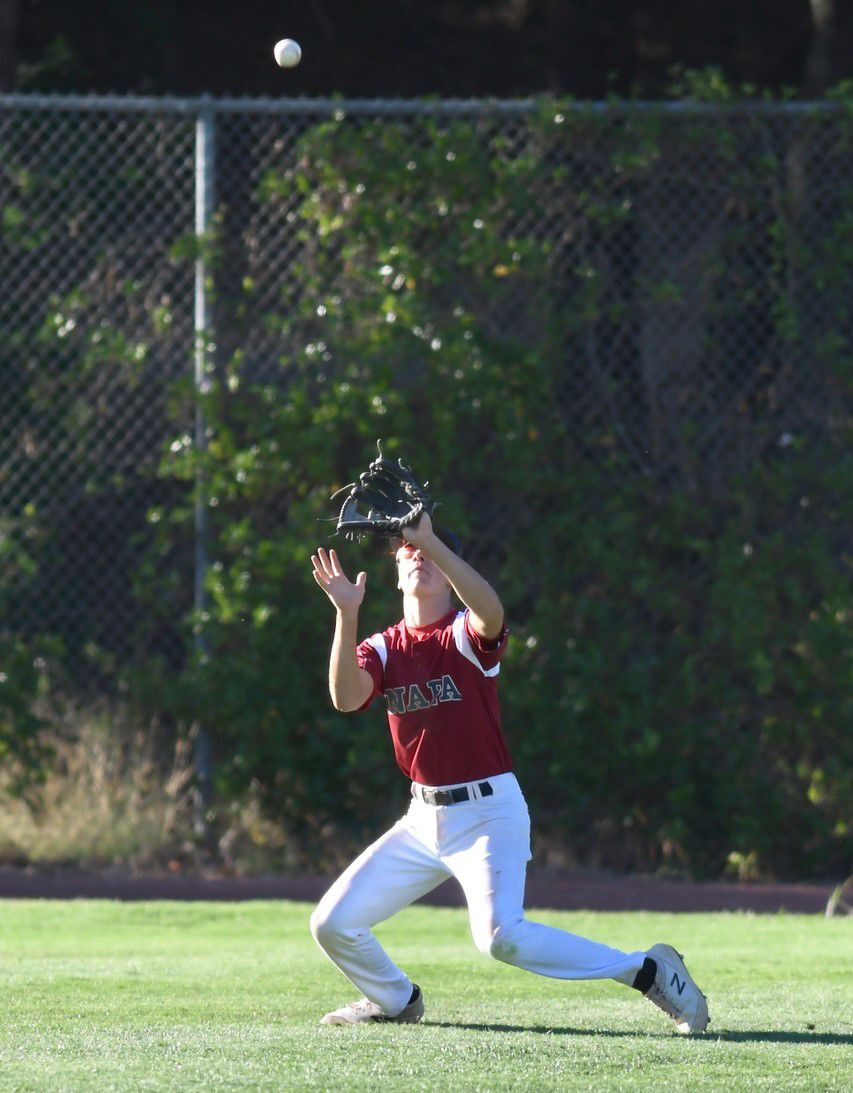 Ian Fernandez of Napa Valley Baseball Club's 15U team makes a catch against the Napa Crushers on June 22 at Cleve Borman Field in Yountville. 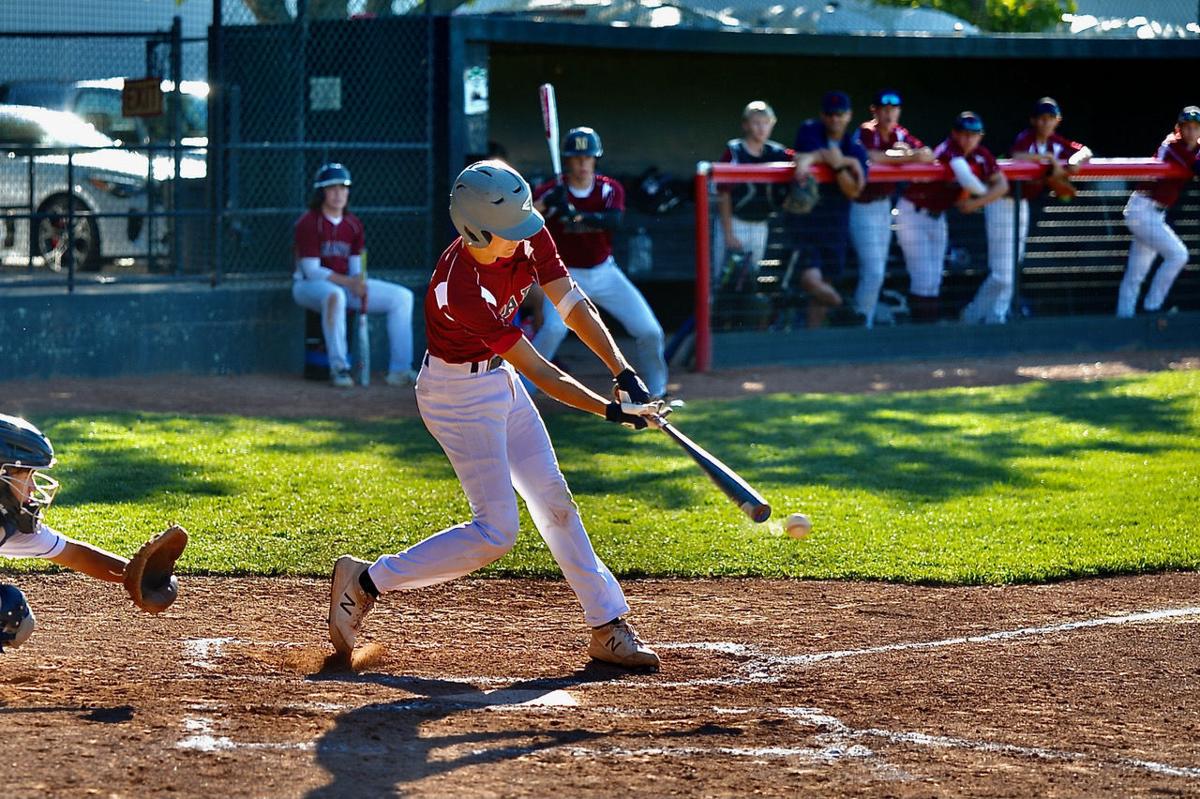 Ian Fernandez of Napa Valley Baseball Club's 15U team gets a hit against the Napa Crushers on June 22 at Cleve Borman Field in Yountville.

The team went 2-0 in pool play on July 17, opening with an 8-1 win over Ballplayers 16U Red of Moraga that saw Ian Fernandez pitch a three-hitter with 11 strikeouts and three walks. He allowed a walk, single and RBI sacrifice fly in the first inning, but faced only four batters over the minimum the rest of the way. He stranded three in the fourth with three straight strikeouts, after Ballplayers quickly loaded the bases with two base hits and a walk.

In a 9-2 win over Hit Club 16U Orange of Belmont, Noah Piersig pitched a four-hitter with four strikeouts, three walks and one earned run. After Chapouris (two runs scored) walked and scored on a single by Cameron Taylor (2 for 3, run scored) in the first, Hit Club tied it in the second and went up 2-1 in the top of the third.

But NVBC broke it open with a four-spot in the bottom of the third that saw Taylor and Sordi open with base hits and both score on a two-run double by Fernandez (2 for 3, run scored). Kai Gulliksen reached on an error that drove in Fernandez, and scored on a single by Miles Tenscher (1 for 1, two walks).

After scoring a run in the fourth, NVBC added three in the fifth on a Colby Chambers single and three walks.

On July 18, NVBC faced Ballplayers 16U Red again and rolled to a 12-3 victory. Chapouris pitched the first three innings and got the win, yielding two hits and one walk while striking out four. He left with an 11-0 lead. Chambers gave up three earned runs on five walks and three hits in the fourth, but Gulliksen pitched the last 1 2/3 innings, allowing one hit and striking out two.

Napa Valley scored six in the first inning with the help of a two-run single by Taylor (1 for 2, three RBIs, run scored), an RBI single by Tenscher, a Gulliksen RBI sacrifice fly, and a Page RBI walk. Chapouris (2 for 3, two runs scored) singled to lead off the second and scored on a Taylor sacrifice fly. Dario Freschi went 1 for 1 with a walk and had an RBI sacrifice fly in the fourth.

Another rematch saw NVBC close with a 6-2 win over Hit Club 16U Orange. The Belmont squad had shut out Cal Athletics of Greenfield in Monterey County, 10-0, and Fairfield PAL, 3-0. But NVBC scored twice in the first, once in the second, twice in the fourth, and once in the fifth.

Tenscher pitched the first five innings for the win, fanning six and allowing one earned run on six hits and one walk. Taylor pitched the last two frames, striking out three and walking two with no hits.

St. Helena starting pitcher Spencer Nelson allowed two runs in the top of the first inning, but his team answered with three in the bottom half to open Monday’s losers-bracket final at the Little League Section 1 Tournament for 13- and 14-year-old players in Healdsburg. Thomas Heil and Joaquin Villegas scored on an error by the shortstop and Xander Kelperis drove in Nelson with a two-out RBI single.

But Vacaville National broke it open with five runs in the fourth. Nelson hit the first two batters and then gave up two-out RBI hits to Blake Kostal and starting pitcher Isaiah Shahan.

St. Helena answered with two in the bottom of the fourth when a Sam Beck single preceded back-to-back RBI doubles by Henry Ray and Nelson to pull within 7-5.

After giving up another five-spot in the fifth, St. Helena went to reliever Charlie Blaum and he pitched two scoreless innings to give St. Helena a chance. In the bottom of the sixth Adam Herdell and Blaum walked and a hard-hit ball by Heil plated both runners. But the rally fell short with the tying run at the plate.

A couple of hard-hit balls turned into outs in the bottom of the seventh, ending the most successful run by a team in the history of St. Helena Little League.

“I am so proud of how these kids competed,” St. Helena manager Paul Villegas said. “Down seven runs at one point, they battled to the end. I’m especially proud of the 14-year-old players. I’ve been with them since their T-ball days, and to see them end their Little League career with a historic run like this is really special.”

Added SHLL President and Coach Jeff Blaum, “We were one of the final 21 teams competing in a tournament of early 400 teams. This is something our league can be very proud of. We had a great contingency of fans that traveled to the game and it was inspiring to see a number of the younger-aged players attend the game wearing their St. Helena All-Star jerseys and cheering the older kids on. This team will be an inspiration for those kids to continue playing baseball.”

Rincon Valley, which had handed St. Helena its first loss of the double-elimination tournament on Sunday, 6-4, went on to edge Vacaville National 8-6 for the section title Tuesday. Rincon Valley advanced to the Little League State Tournament, which begins Saturday in Healdsburg.

Who has the edge in the NL Wildcard race?

Miles Tenscher of Napa Valley Baseball Club's 15U team gets a hit against the Napa Crushers on June 22 at Cleve Borman Field in Yountville.

Ian Fernandez of Napa Valley Baseball Club's 15U team makes a catch against the Napa Crushers on June 22 at Cleve Borman Field in Yountville.

Ian Fernandez of Napa Valley Baseball Club's 15U team gets a hit against the Napa Crushers on June 22 at Cleve Borman Field in Yountville.