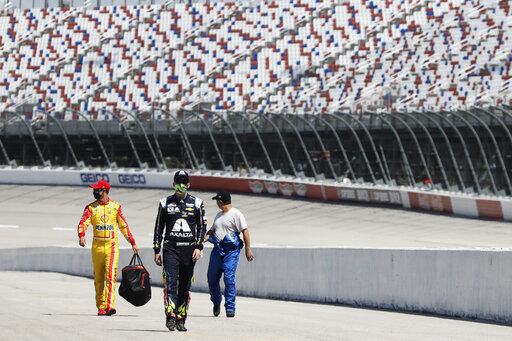 Drivers walk to their cars for the start of the NASCAR Cup Series auto race Sunday, May 17, in Darlington, S.C. 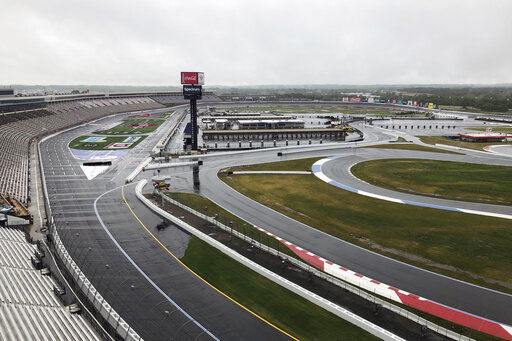 CHARLOTTE, N.C. — The Monaco Grand Prix has been canceled.

The Indianapolis 500 is postponed until August.

Only the Coca-Cola 600 is still scheduled as planned.

The most celebrated day in motorsports has been whittled down to the third course, 600 miles around Charlotte Motor Speedway in NASCAR’s longest race of the year. What began as the World 600 in 1959 became the nightcap to a spectacular day of automobile racing treasured annually by fans.

The Sunday before Memorial Day begins in the French Riviera as Formula One races the streets of Monaco. The race began in 1929 and has been held every year since 1959 until the coronavirus pandemic wiped out a portion of F1’s season.

Then it is on to Indianapolis Motor Speedway on the corner of Georgetown Road and 16th Street for the Indy 500. It started as the International 500-Mile Sweepstakes Race in 1911, grew into “The Greatest Spectacle in Racing” and has run on Memorial Day weekend every year since 1946. Roger Penske, in his first year as owner, has postponed the race two months because of the pandemic.

It means NASCAR is alone in the spotlight Sunday night, just as NASCAR has been for the last week. The stock car series, using a tight health screening plan and aided by its close proximity to states with relaxed restrictions. has already completed three races in the last week.

The next one is a crown jewel event that doubles as an elaborate salute to the United States military. The dusk-to-dark race is an actual Memorial Day party as fallen heroes are honored on each car and Speedway Motorsports prides itself on productions that conclude with a post-race fireworks spectacular.

The race itself is one of the most grueling of the season. It’s almost always hot, the race is 100 miles longer than any other and it is a true battle of attrition. It’s not always the most exciting event and NASCAR has struggled over the years to find an aerodynamic package capable of compelling competition.

Still, drivers love this event and many teams thrive in the challenge of tackling a 600-miler. They also respect what the Coca-Cola 600 has become over the last 61 years.

“I think for our hardcore fans and for the people that appreciate the history of NASCAR, the 600 is it’s own kind of animal and it’s own show,” said Martin Truex Jr. “For us in the sport and drivers especially, it’s a big one and it’s one we all want to win.”

Here’s a look at the top topics going into Charlotte:

Even with rain disruptions, NASCAR had a good first week back at Darlington Raceway. Kevin Harvick got his first win of the season and 50th of his career in the first race, and Denny Hamlin won for the third time at Darlington in the first Wednesday race in 34 years.

Both races at Darlington were compelling and the Xfinity Series finish Thursday came down to a last-lap battle Chase Briscoe won over Kyle Busch.

Now comes the 600, which often turns into green-flag runs where cars are stretched into a long parade lap. Strategy, tire conservation and luck can factor into the race in a combination that often doesn’t make for for good television. That’s the only viewing option though because spectators are no t permitted, so NASCAR must hope the casual sports fan sticks with the racing.

A snoozer of a race could spoil NASCAR’s current high.

“It’s the Coca-Cola 600 and you cannot change that,” Joey Logano said. “It’s a good race track and it’s going to be intense out there from lap one. It’s 100% from lap one. We’re hammer down every lap.”

No one has excelled at Charlotte like Truex, who has two wins, a second-place finish and a third in his last four 600s. Truex has led 625 of 1,200 laps in that span.

He is winless so far this season, his second at Joe Gibbs Racing and first since crew chief Cole Pearn’s startling offseason retirement. But Truex is heating up and grabbed a pair of top-10 finishes at Darlington.

“I feel like we really picked up where we left off last year,” Truex said of last year’s seven-win season. “We’re right there and James is doing an awesome job.”

Elliott has twice been voted by fans as NASCAR’s most popular driver and Busch is notoriously disliked, so the on-track incident has the makings for a good, old-fashioned feud. Instead, Busch has publicly accepted blame and called Elliott to apologize.

Elliott accepted that Busch made a mistake but can’t help being bitter. Busch went on to finish second in a 1-2 with Hamlin for Joe Gibbs Racing; Elliott was 38th.

“I get that mistakes happen, that’s part of life and I get it,” Elliott said. “He’s just not a guy that makes many mistakes, so for me to be on the poor end of a rare mistake on his end is, at the end of the day, unfortunate for me and my team.”

The pre-race party isn’t entirely ruined as speedway officials are still managing the NASCAR tradition of a flyover after the national anthem.

The invocation, anthem and stating command will be done virtually, but the Air Force Heritage Flight will still make a fly-by to spark some electricity at the otherwise empty event.

Drivers walk to their cars for the start of the NASCAR Cup Series auto race Sunday, May 17, in Darlington, S.C.