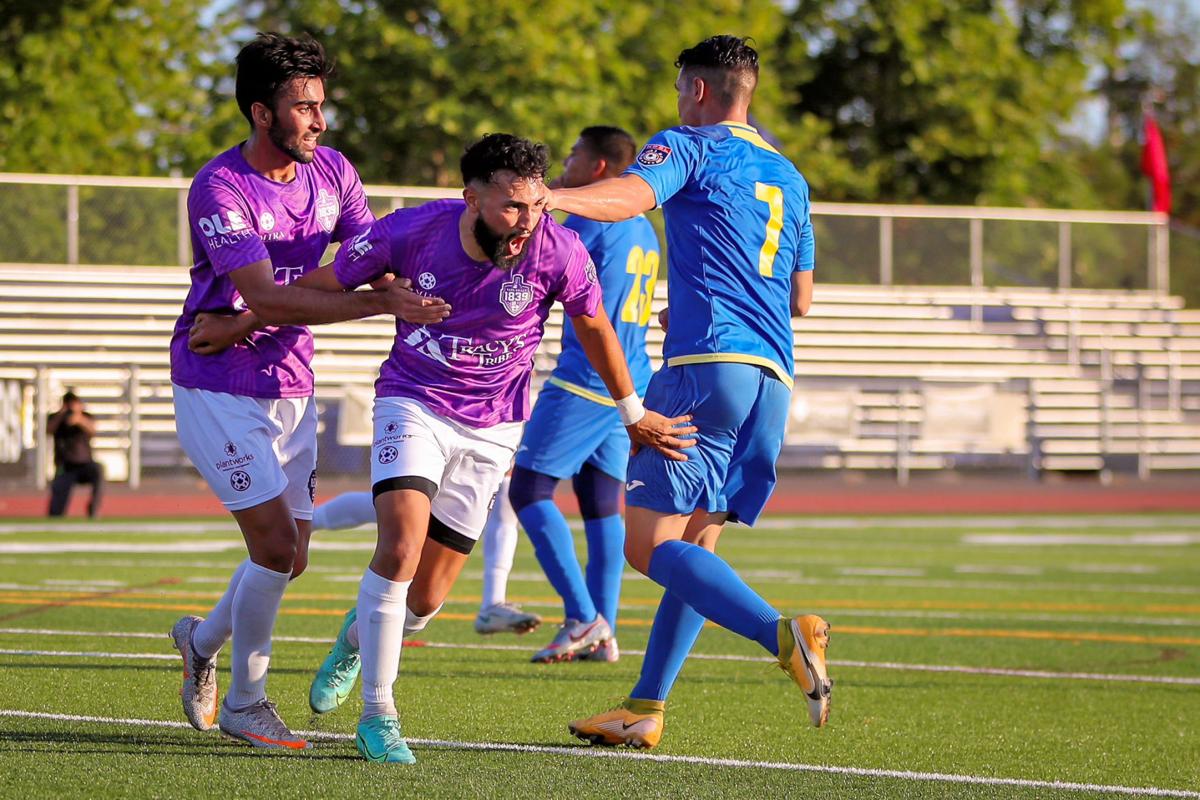 Napa Valley 1839 FC's Marco Manzo, middle, celebrates with Arjan Dosanjh after scoring on a Francisco Mendoza assist against El Farolito on Saturday night at Justin-Siena. Manzo was the Napa Valley Register's 2016-17 Napa County Player of the Year as a senior at Vintage High School in Napa. 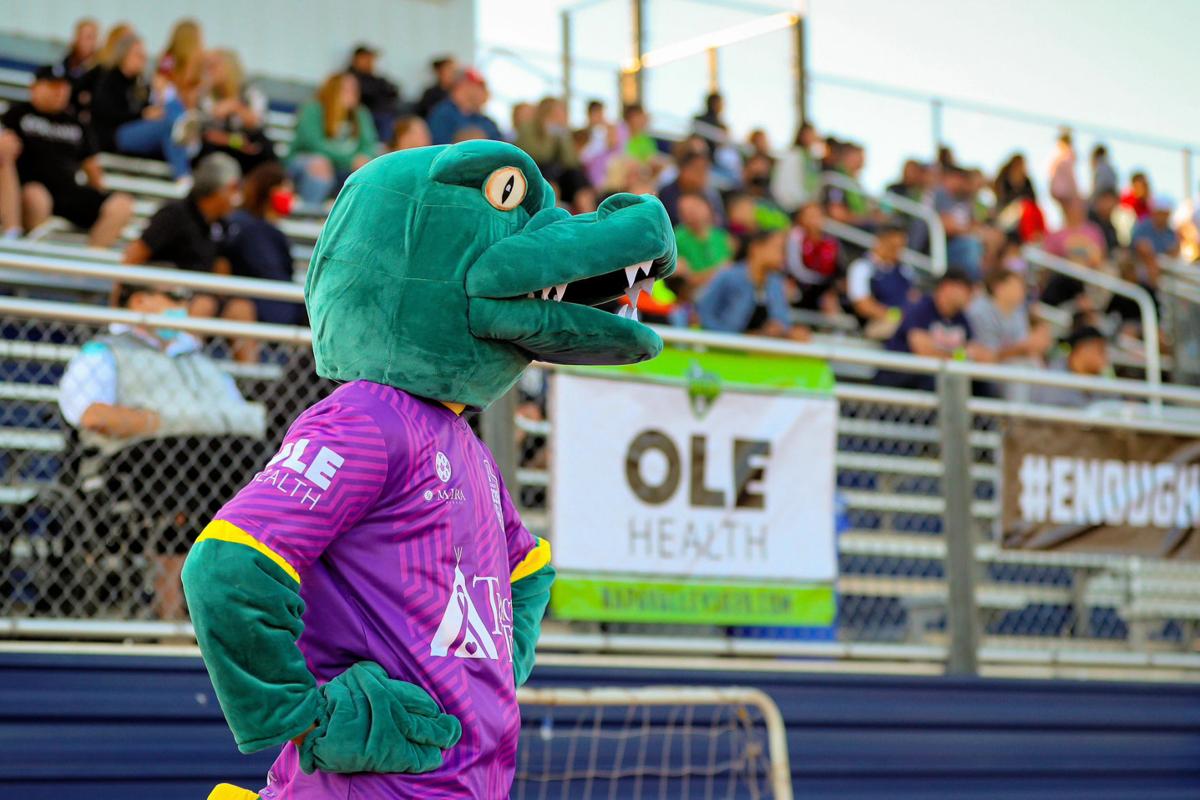 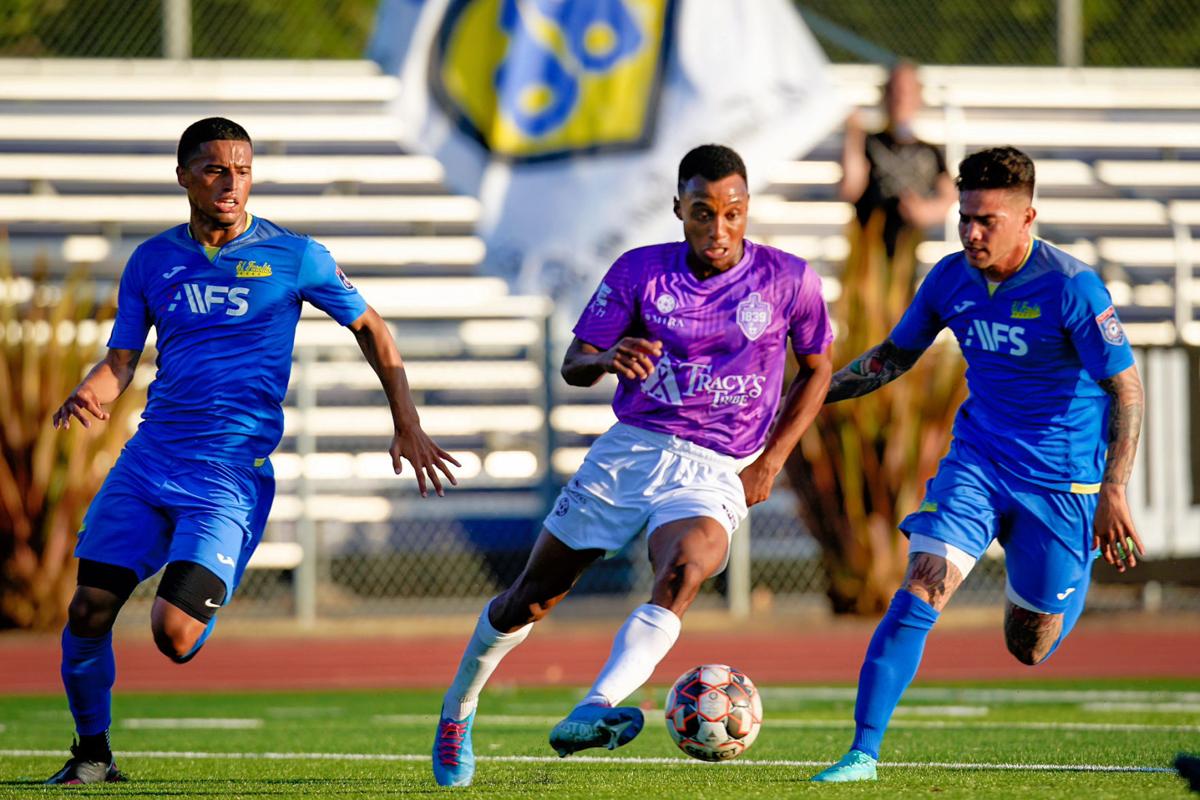 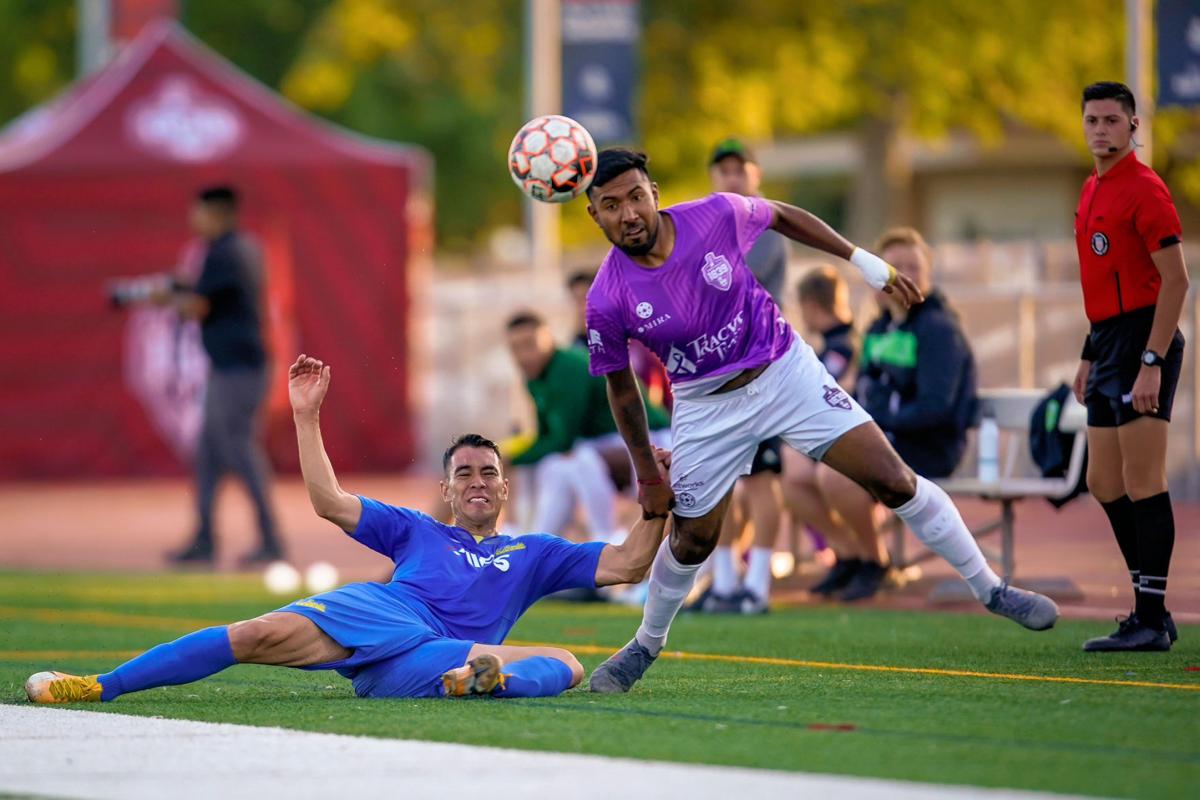 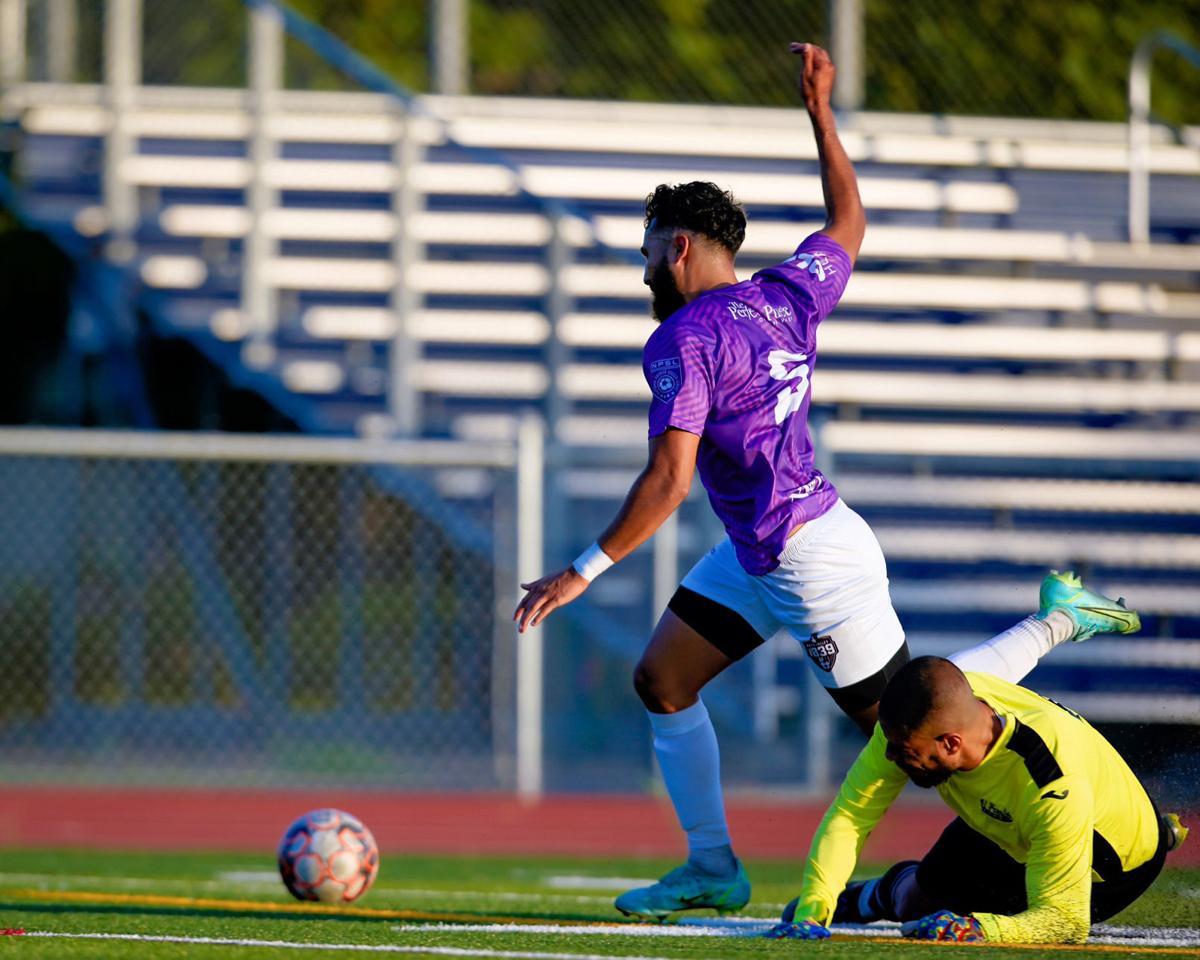 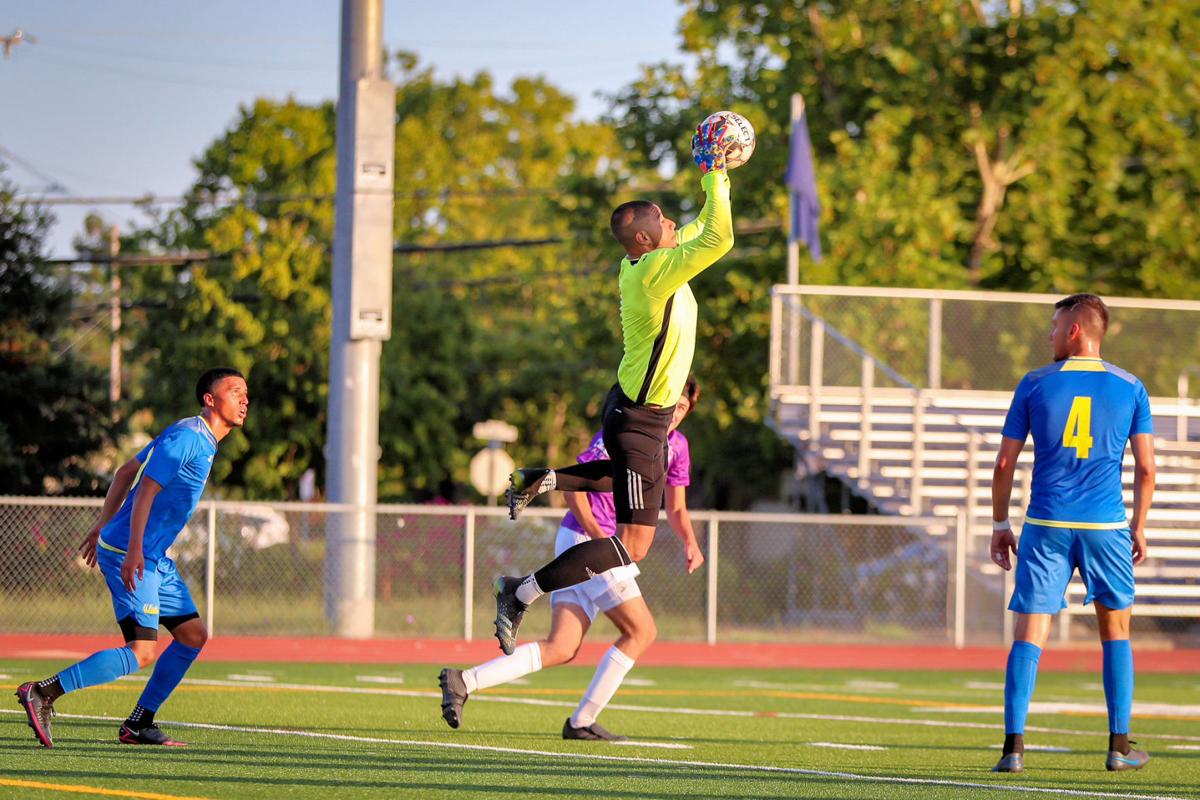 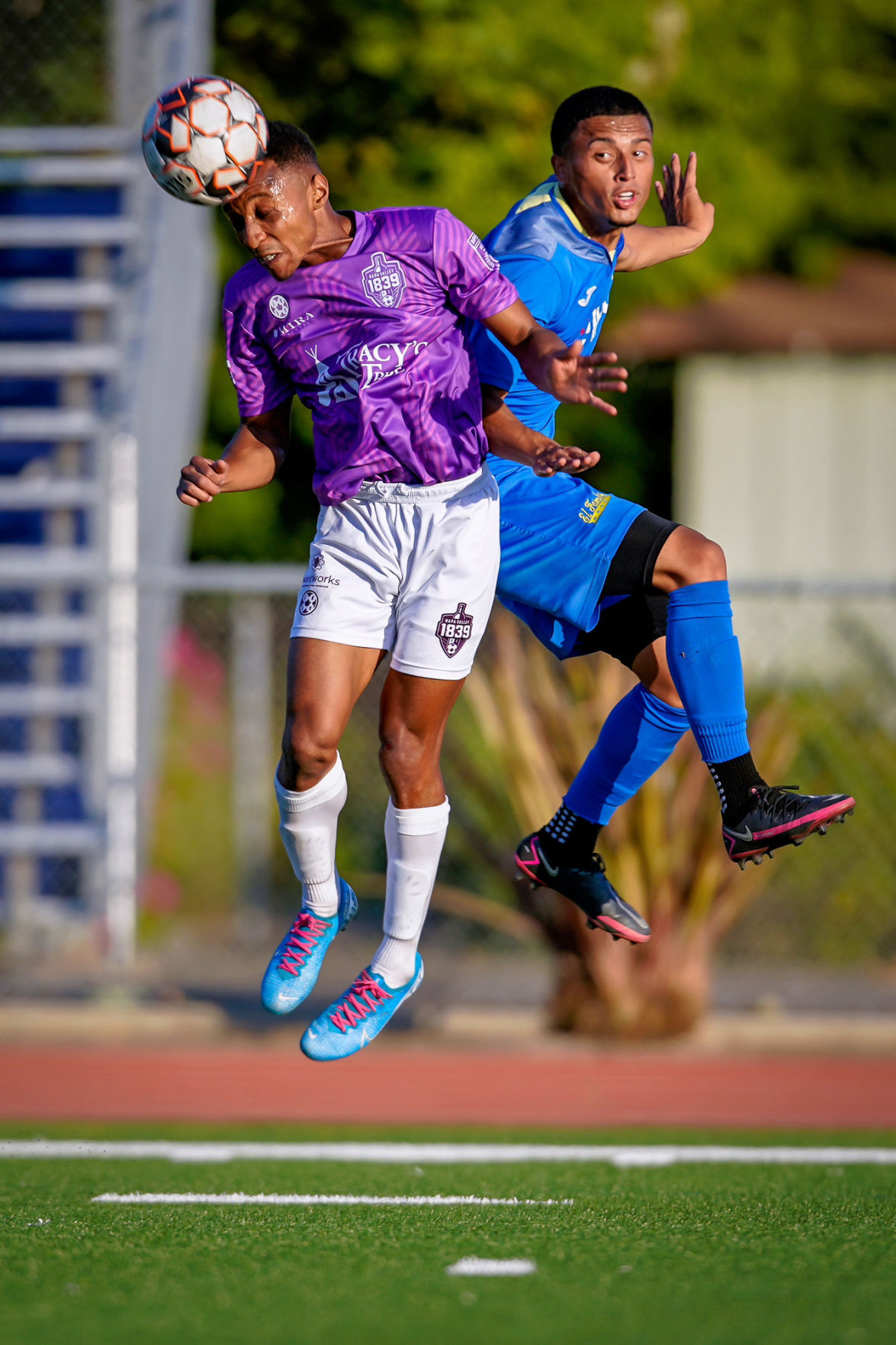 Players from Napa Valley 1839 FC, left, and El Farolito go up for a header Saturday night at Justin-Siena. 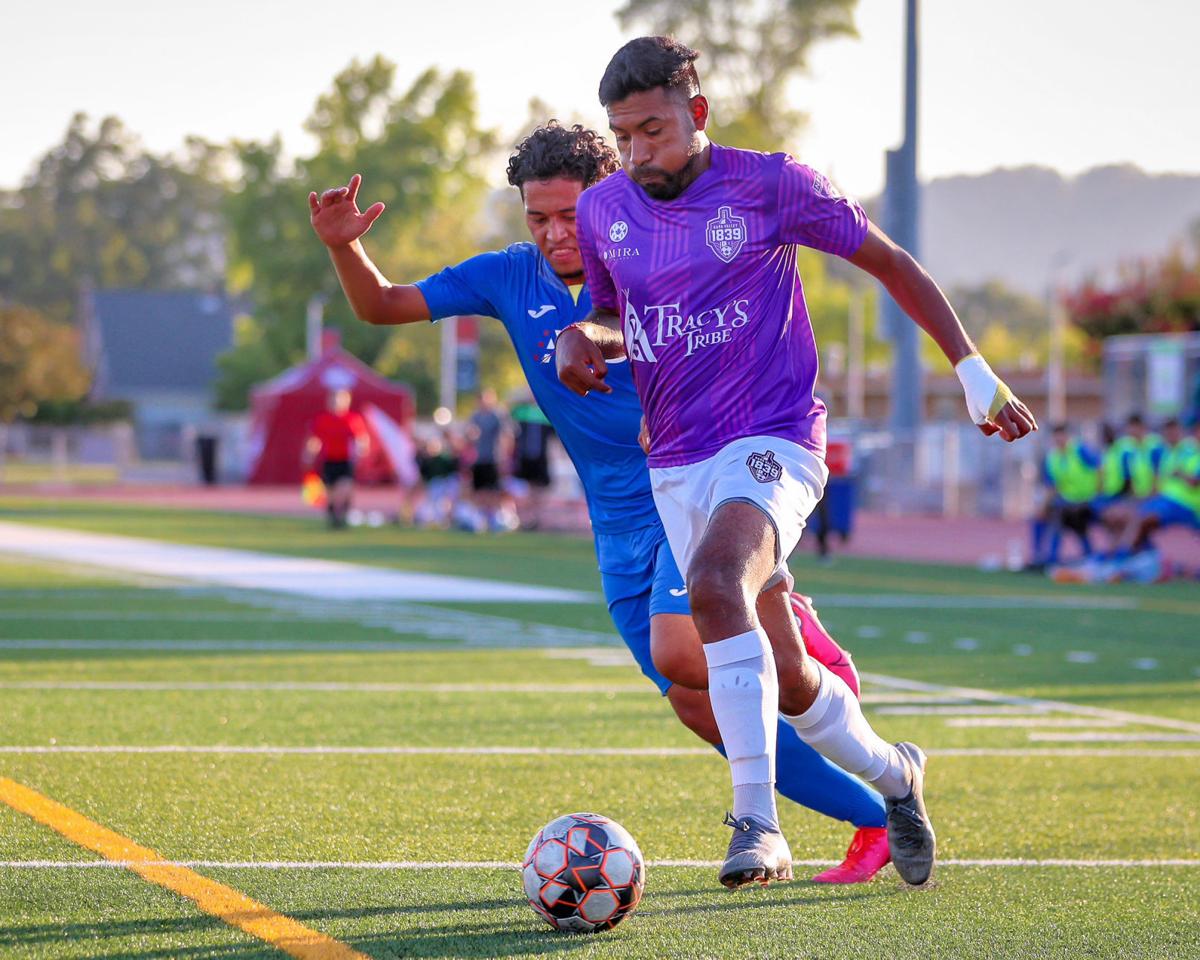 Napa Valley 1839 FC's Francisco Mendoza advances the ball ahead of El Farolito's Jehimy Adony Arias in the first half Saturday night at Justin-Siena. 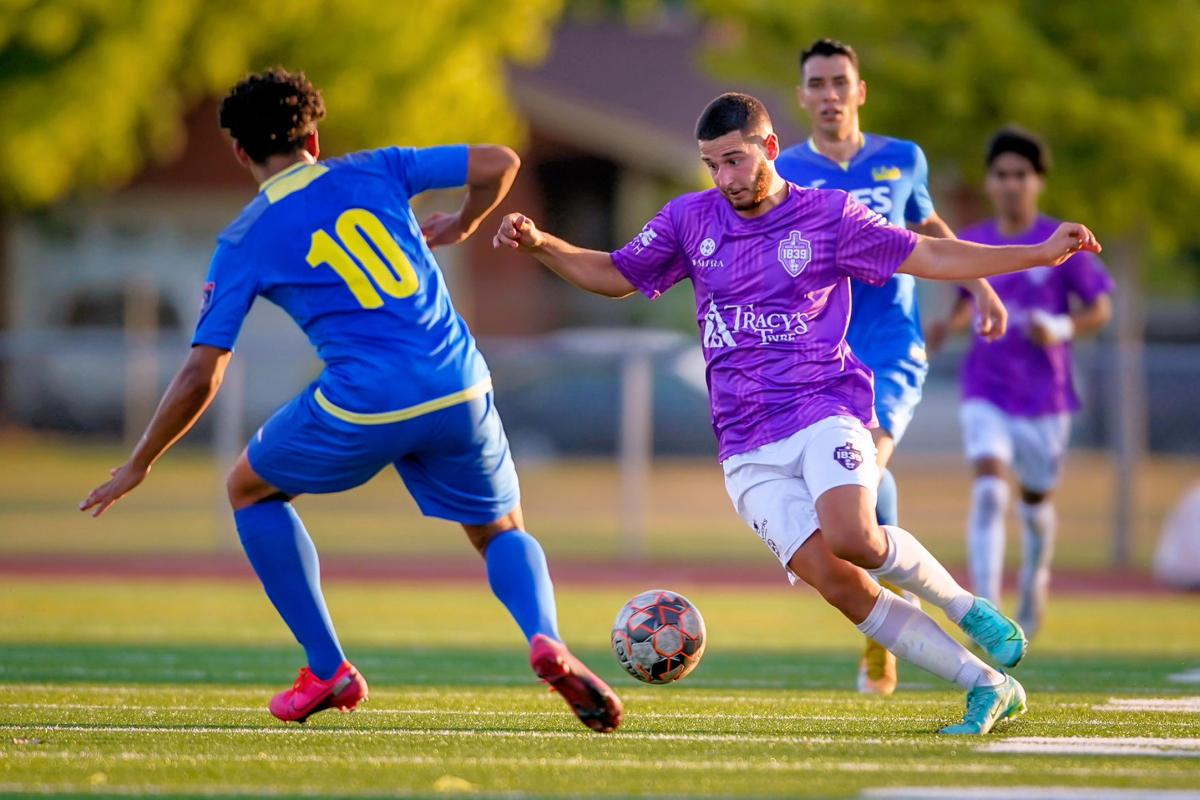 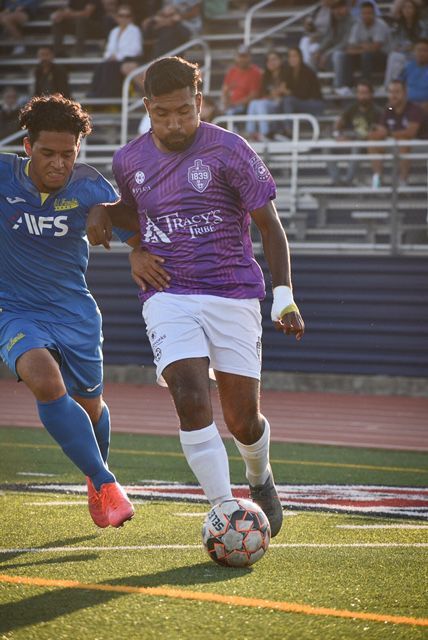 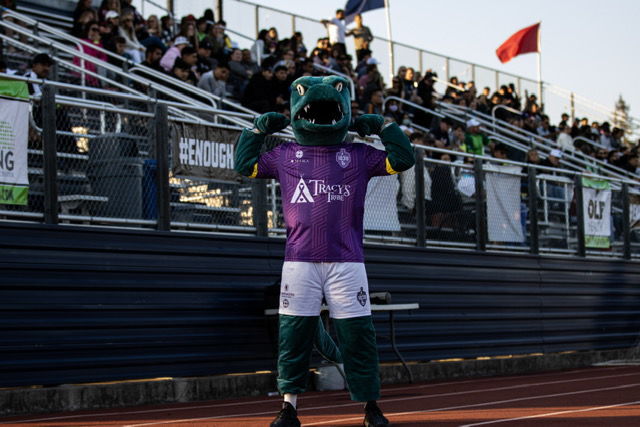 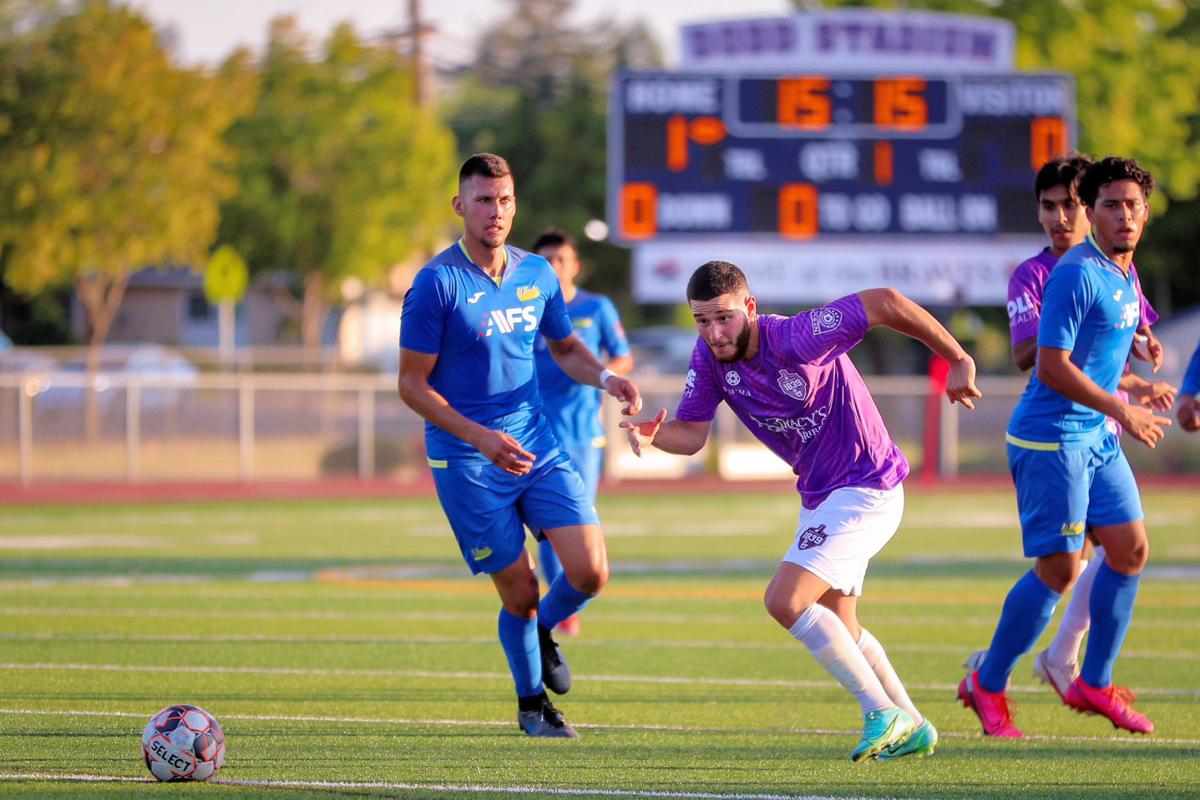 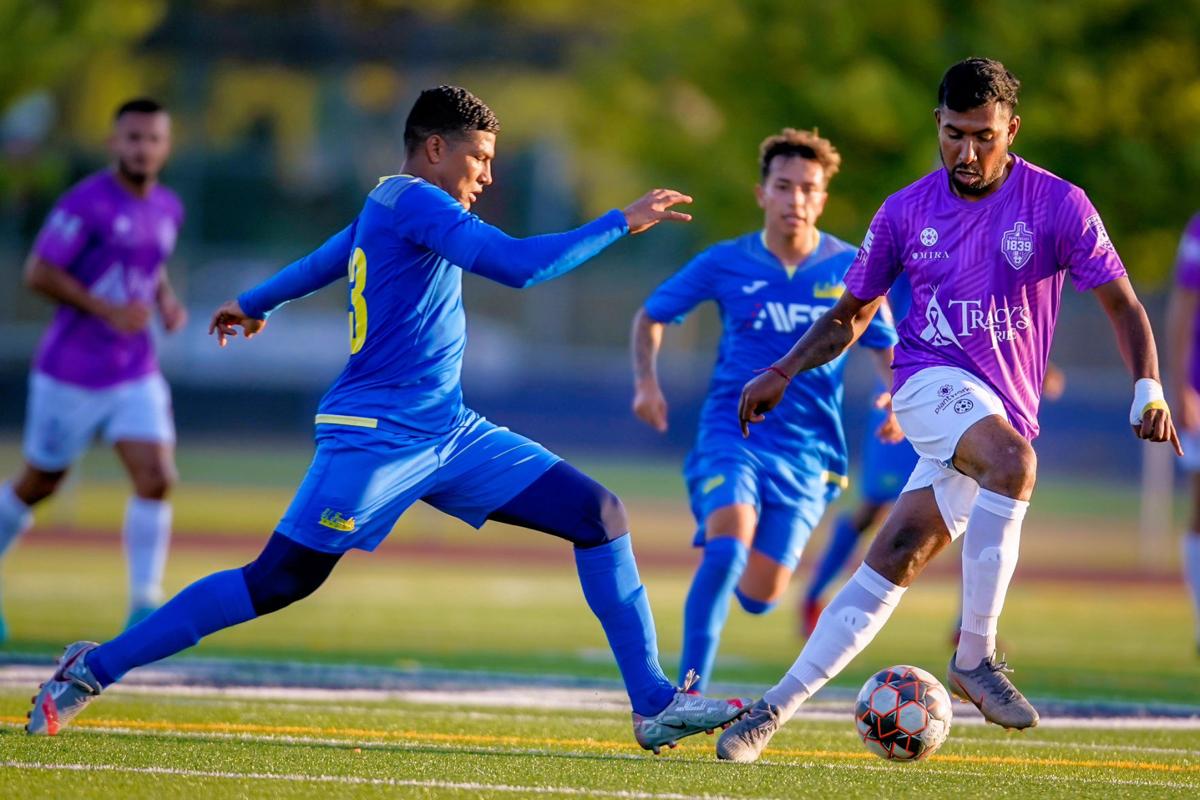 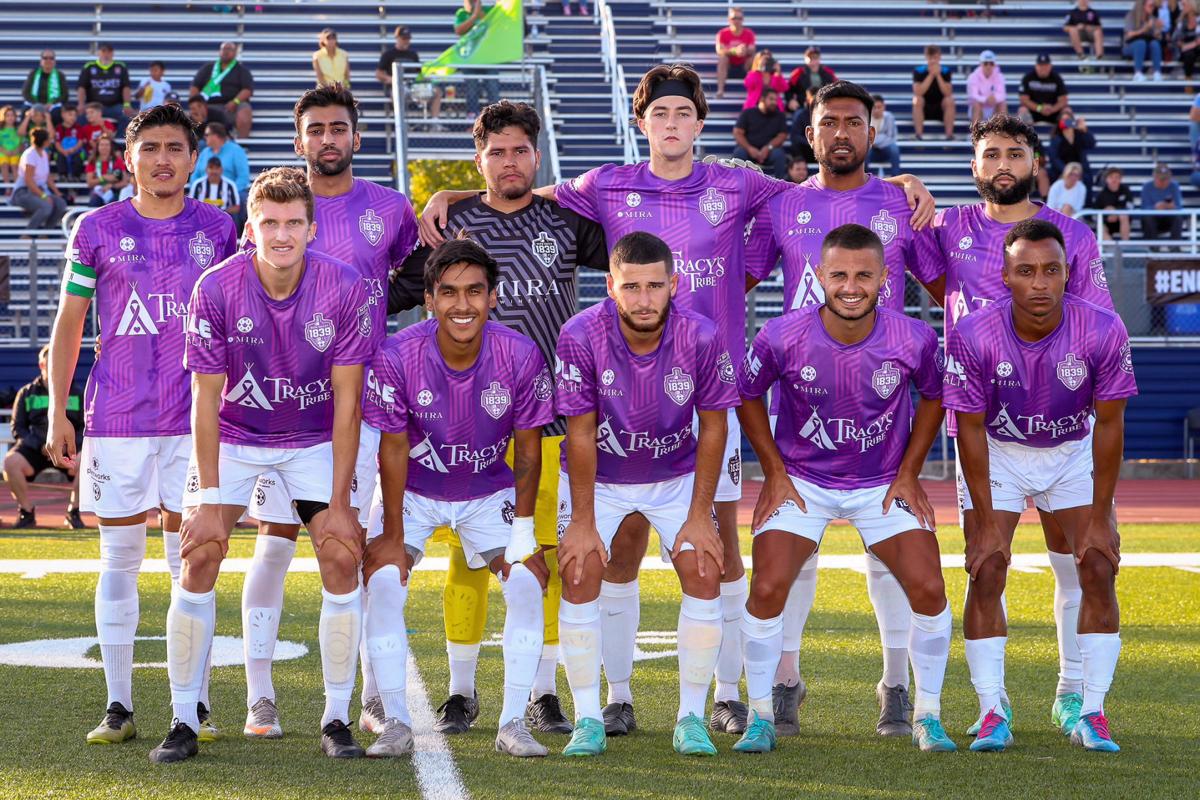 For the first time since joining the National Premier Soccer League in 2017, Napa Valley 1839 FC has secured a home playoff match.

The Wine Country side did it by defeating San Francisco’s El Farolito, 2-1, on Saturday night at Justin-Siena’s Dodd Stadium in what turned out to be an instant classic.

“It’s always intense when we face off against El Farolito. It’s the type of game one wants to participate in and leave their mark,” said 1839 FC veteran striker Francisco Mendoza, whose team played in front of nearly 500 spectators.

“The fans really pushed us tonight. We felt their presence and that really made a difference, especially when we went down a player. We’re very thankful for their support and hope to continue giving them more to celebrate about.”

Napa Valley switched from its traditional green kits to its annual good cause kit. This year the uniform was purple, to represent Tracy’s Tribe Foundation.

“The motivation for this year's good cause kit was a Napa family that has been battling a rare form of lung cancer,” 1839 FC owner Arik Housley said of ALK, a genetic lung cancer. “Tracy’s Tribe are the group of locals that formed to support her through her fight. Napa Valley 1839 FC wanted to help with the fight as well and raise awareness. All proceeds from the Tracy’s Tribe player jersey sales tonight, as well as contributions, will be donated to the family and ALK research.”

Purple seemed to bring luck to 1839 FC. For the first time all season, the club left its first-half struggles behind and managed a lead — even with only 10 men for a large portion of the match. Up to this point the Wine Country side had been most effective during the second halves of matches, tallying 13 of its 18 goals during those 45 minutes.

Early on, though, it appeared as if El Farolito would spoil Napa’s night. Immediately, in the first minute, the side from San Francisco just missed an opportunity to take the lead as a shot from striker Brayan Villalobos hit the crossbar. With Federico Cortes making his home debut in goal, in place of Sucre Herrera, Napa Valley didn’t seem fazed by the close call and controlled both sides of the ball for the remainder of the half.

Napa Valley began to string passes together and not share the ball with the visitors. Cortes wasn’t tested again until the final minutes of the half, when he made a spectacular save at another shot attempt from Villalobos on a scrambled loose ball after a corner kick.

By that point, 1839 FC had already taken a 1-0 lead after a series of counter attacks on a goal guarded by Jonathan Barona finally paid off. A combination of six passes in the 21st minute, beginning with defender Ian Reis and culminating with Francisco Mendoza assisting midfielder Marco Manzo for a tap-in finish, gave the home side the lead. That sent the fans into an eruption of celebrations led by 1839 FC mascot Napa Snappa.

Napa Valley headed into halftime with the lone-goal lead.

To begin the second half, 1839 FC head coach Mark Corbett substituted in attacker Emmanuel Johnson for defender Paul Ramsey. Johnson impacted the match hugely, but not before El Farolito capitalized on an early scoring opportunity. Unlike in the first half, the San Francisco side took advantage of space. Just two minutes into the half, forward Julio Herrera leveled the score on an assist from Erik Arias after a fast counterattack left Cortes with no opportunity to make a save.

Like in the first 45 minutes, Napa Valley kept its composure and wasn’t negatively impacted by conceding an early goal. The string of passes continued, this time with a touch of more speed produced by Johnson. It didn’t take long for the Sacramento Republic FC Academy standout to make his presence felt.

Challenging the visiting defenders with his speed and agility, Johnson drew several fouls, and one of them resulted in a penalty in the 58th minute. Mendoza was the man in charge, giving the home side the 2-1 lead and leave his mark on the match by scoring another important goal for 1839 FC from the penalty spot.

Just two minutes after taking the lead, Napa Valley saw goalkeeper Cortes get ejected from the match with a straight red card after stopping an attack and a clear opportunity for a goal by El Farolito’s Julio Herrera. The minutes that followed were full of drama for all in the stands.

Former Vintage High School standout Carlos “Manzanita” Ayala took over in goal, earning his first minutes of the season after returning from a hamstring injury.

Outnumbered by one in the field, Napa Valley still managed to create scoring opportunities thanks to the speed of Johnson and former American Canyon High standout William Biondini. The young duo kept El Farolito’s defense busy despite not being able to extend the lead for the remainder of the match. With time running out, the visitors gave 1839 FC all they had. In the dying minutes, an attempt to equalize the match was denied by an outstanding save from Ayala. The young goalkeeper denied a header attempt on a corner kick from San Francisco goalkeeper Barona, who had incorporated himself into the attack for the visitors.

“Tonight we showed the team we really are,” Napa Valley head coach Mark Corbett said. “From minute 1 all the way to 90 we demonstrated what we’re capable of, whether it be with 11 or 10 players. It was a convincing victory.”

Napa Valley 1839 FC concluded the match with strong defensive play to earn a very exciting win while securing a third-place finish in the National Premier Soccer League’s Golden Gate Conference. With its third consecutive win over El Farolito, the Wine Country side ended the regular season with an overall record of 4-1-2.

Preparations for playoffs are underway as Corbett turns his focus to sixth seed Contra Costa FC (3-4). The match is scheduled for 7 p.m. Saturday, July 31, at Justin-Siena’s Dodd Stadium. Tickets will be available at the stadium beginning at 5:30 p.m.

“We love seeing the crowd,” added Corbett. “The supporters have been amazing all season both home and away. We’re looking forward to seeing them pack the stands on Saturday and make their presence felt for the club’s first-ever playoff match.”

Napa Valley 1839 FC's Marco Manzo, middle, celebrates with Arjan Dosanjh after scoring on a Francisco Mendoza assist against El Farolito on Saturday night at Justin-Siena. Manzo was the Napa Valley Register's 2016-17 Napa County Player of the Year as a senior at Vintage High School in Napa.

Players from Napa Valley 1839 FC, left, and El Farolito go up for a header Saturday night at Justin-Siena.

Napa Valley 1839 FC's Francisco Mendoza advances the ball ahead of El Farolito's Jehimy Adony Arias in the first half Saturday night at Justin-Siena.