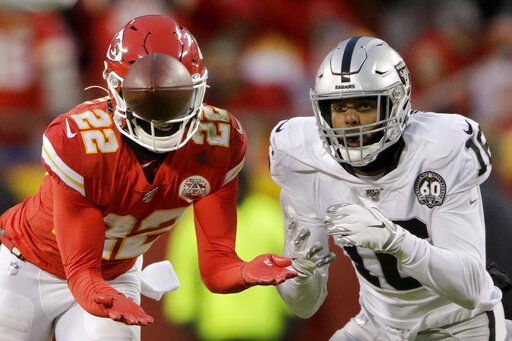 Kansas City Chiefs safety Juan Thornhill (22) intercepts a pass intended for Oakland Raiders wide receiver Keelan Doss (18) and returns it for a touchdown during the first half of an NFL football game in Kansas City, Mo., Sunday. 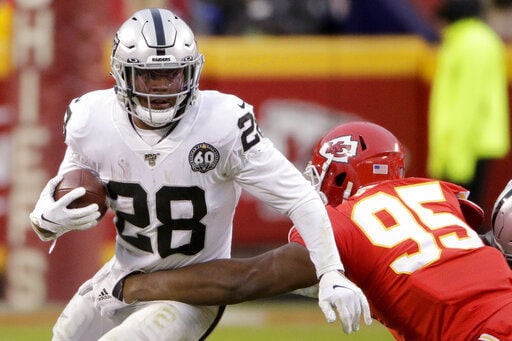 Oakland Raiders running back Josh Jacobs (28) tries to break a tackle by Kansas City Chiefs defensive tackle Chris Jones (95) during the first half of an NFL football game in Kansas City, Mo., Sunday. 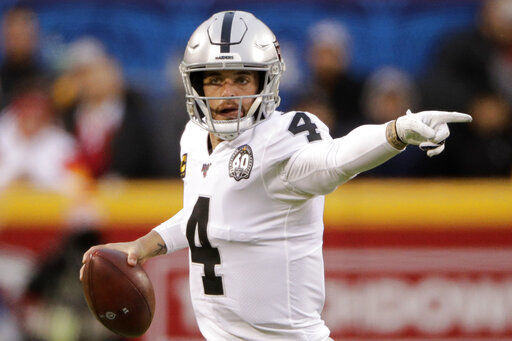 Oakland Raiders quarterback Derek Carr (4) gestures during the first half of an NFL football game against the Kansas City Chiefs in Kansas City, Mo., Sunday.

ALAMEDA, Calif. — The Oakland Raiders are greatly improved in coach Jon Gruden’s second season back on the sideline.

That doesn’t mean they have enough talent to overcome the type of mistakes they made in their latest loss in Kansas City.

The Raiders (6-6) turned over the ball on their first two possessions, threw another interception that was returned for a touchdown later in the first half, and committed 12 penalties. That added up to a 40-9 loss Sunday to the Chiefs that all but ended Oakland’s hopes of winning the division and put wild-card chances in jeopardy.

“The penalties, the turnovers, dropped passes, miscues have hurt us, and it’s been a big factor I think in the last couple of weeks,” coach Jon Gruden said Monday. “That’s something I’ve got to do a much better job of. I’m the man calling the plays.”

After back-to-back 30-point losses on the road to the New York Jets and Chiefs, the Raiders return home for two games that will determine how long they will stay in the playoff race.

Oakland trails Pittsburgh and Tennessee by one game for the final wild-card spot, but hosts the Titans on Sunday. The Raiders then finish with three games against teams that are currently 4-8, hosting Jacksonville before finishing on the road against the Chargers and Broncos.

“We need to be real at what is still at stake for us,” quarterback Derek Carr said. “Yes, we got beat twice, and yes, they were terrible losses. But we play some important games coming up. We play some teams that we need to play to get to where we want to get. If we just want to hang our heads and sulk, we can do that. But that’s never how I’ve been and I don’t think that’s how this group is.”

Passing game. Carr once again had a rough day at Arrowhead Stadium, dropping to 0-6 in his career at Kansas City. He threw an interception on the first drive, had another that was returned for a touchdown in the second quarter, and finished 20 for 30 for 222 yards, with most of the production coming on a late drive well after the game had been decided. He didn’t get much help from his wide receivers, who had only one catch before the final drive. The lack of an outside threat has hindered the offense greatly, contributing to a nine-quarter stretch without a touchdown.

RB Josh Jacobs. One of the only bright spots to another rough day was Jacobs, who had 17 carries for 104 yards to reach 1,061 yards rushing on the season. Jacobs is the fourth Raiders player to reach the 1,000-yard mark in the first 12 games of the season, joining Marcus Allen, Mark van Eeghen and Napoleon Kaufman.

WR/KR Trevor Davis. Davis fumbled a kickoff in the first quarter and then was stopped on a fourth-and-1 end-around in the second quarter when the Raiders were driving down 7-0. Davis was replaced by Jalen Richard on kick returns following his fumble and didn’t play another snap on offense after his one run. The Raiders released him on Monday.

LB Marquel Lee was activated from IR on Monday after being sidelined in September with an ankle injury.

30 — The Raiders suffered back-to-back losses by at least 30 points for just the second time in franchise history, having also done it in the first two games in 1961. Oakland also joined the 2017 Bills, 2010 Seahawks and 2008 Giants as the only teams in the Super Bowl era to lose back-to-back games by at least 30 points despite having a winning record going into both games.

The Raiders return home for the final two scheduled games at the Coliseum, hosting Tennessee on Sunday and Jacksonville next week.

Look to the Chargers and Seahawks to make the playoffs

US Open: Can Phil Mickelson make the cut after A +4 Round 1

US Open: Can Phil Mickelson make the cut after A +4 Round 1

An injury could cost Jacob deGrom an award

An injury could cost Jacob deGrom an award

Stanford swept its NCAA super regional Saturday and locked up a spot in the College World Series.

The series opener Friday is scheduled for 6:45 p.m., and Saturday and Sunday's games will both kick off at 1:05 p.m.

Golf: Napa's Sims on bag for Theegala in U.S. Open

Zack Sims, a 2012 Napa High graduate who starred in golf and football there, will caddy for PGA Tour golfer Sahith Theegala for the ninth time this season Thursday through Sunday at the U.S. Open in Torrey Pines.

The Napa Valley Cricket Club started its first season since 2019 with a victory over the Marin Socials on May 22 in Larkspur and a loss to the Sri Lanka Lions on May 22 in Davis.

Kansas City Chiefs safety Juan Thornhill (22) intercepts a pass intended for Oakland Raiders wide receiver Keelan Doss (18) and returns it for a touchdown during the first half of an NFL football game in Kansas City, Mo., Sunday.

Oakland Raiders running back Josh Jacobs (28) tries to break a tackle by Kansas City Chiefs defensive tackle Chris Jones (95) during the first half of an NFL football game in Kansas City, Mo., Sunday.

Oakland Raiders quarterback Derek Carr (4) gestures during the first half of an NFL football game against the Kansas City Chiefs in Kansas City, Mo., Sunday.