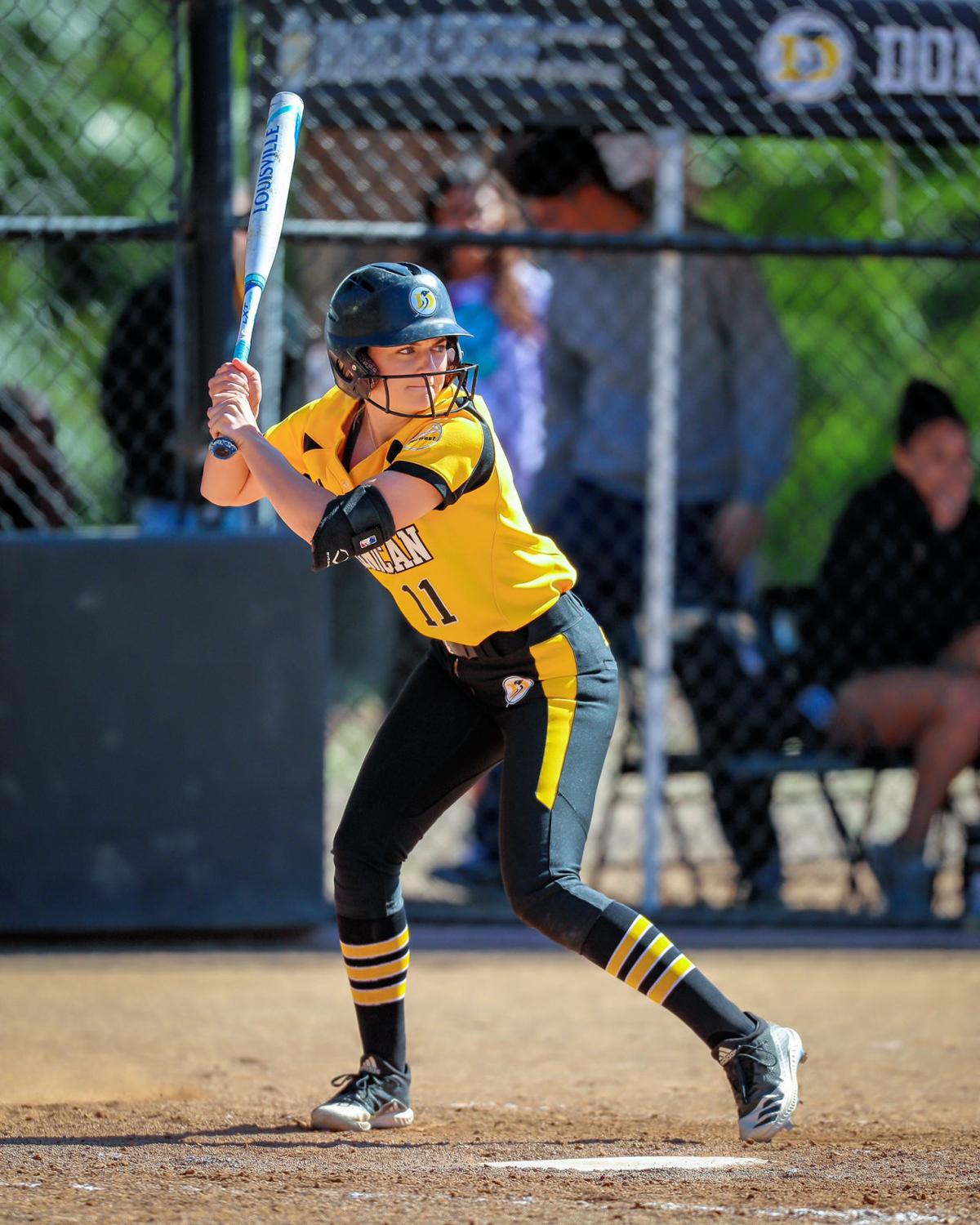 Napa High graduate Peyton Mott waits for a pitch while batting for Dominican University of California in San Rafael on Feb. 23, 2020 against Holy Names of Oakland.

Peyton Mott, a junior outfielder from Napa, was named to the All-Pacific West Conference softball team for Dominican University of California, it was announced at dominicanathletics.com on May 11.

The Napa High School graduate was named to the first team after leading Dominican, located in San Rafael, in batting average (.391), slugging percentage (.576), and on-base percentage (.462).

Mott finished the season with two triples, 10 doubles, 20 RBIs and 10 stolen bases. Mott had a super season in the outfield — no errors, three assists and 53 putouts.

Mott was a four-year starter at Napa High and the co-Player of the Year on the Napa Valley Register’s 2018 All-Napa County team.

Kiwa Anisman, a junior at Macalester College who is from Yountville, tied for 21st at the Minnesota Intercollegiate Athletic Conference Women’s Golf Championships.

Raimy Gamsby, a pitcher for the Vintage High softball team, is No. 84 in the Cal-Hi Sports Hot 100 Player Rankings for the Class of 2022, it was announced on May 1 in a report by CalHiSports.com at calhisports.com.

“It could be the best class for Northern California players in many years … ” the report said.

The Crushers, who are 11-1 overall and 10-1 in the Vine Valley Athletic League, close their season at 4 p.m. Tuesday at Petaluma. A win would tie them with American Canyon for the league's best record.

The Bruins, after going 19-2 in Pacific 12 Conference play, beat Long Beach State, Fresno State and Minnesota in the Los Angeles Regional May 21-23.

In the Super Regional, also at Easton Stadium, UCLA won a three-game series over Virginia Tech this past weekend.

The Bruins (46-5) are the No. 2 seed in the June 3-9 NCAA Tournament in Oklahoma City and will open against No. 10 Florida State at 6:30 p.m. Thursday, Pacific time. UCLA is the defending national champion.

The state CIF office announced in a media release that there will not be state championships in track and field, swimming and diving, or wrestling this year.

“… Due to the limited number of Sections in Northern California conducting championships, coupled with potential logistical/travel issues, the State CIF will not be hosting State Championships in swim & dive, track & field, and wrestling,” it said at cifstate.org on April 28.

“As conditions improve through the remainder of the 2020-21 school year, we are hopeful for a full return in August to education-based athletics.”

Abreu finished 18th in a 30-lap feature race on May 8 at Eldora Speedway in Rossburg, Ohio and earned $900.

Abreu was fifth in a 40-lap feature race on April 29 at Jacksonville Speedway in Jacksonville, Illinois and earned $2,500.

Jason Brandow, a junior outfielder from Napa, batted .274 with 9 doubles, a triple, 3 home runs and 25 RBIs in 41 games for the Cal State Fullerton baseball team.

The Vintage High graduate had a .435 slugging percentage for the Titans, who finished 20-35 overall and 13-23 in Big West Conference play.

Napa High graduate Katie O’Donnell batted .195 (8 for 41) for the University of Chicago softball team in 19 games.

Aiello, a Vintage High graduate who plays shortstop, was also selected to the conference’s Gold Glove Team for her .959 fielding percentage.

Cristie Kerr will play in the 76th U.S. Women’s Open Championship June 3-6 on the Lake Course at The Olympic Club in San Francisco on a special exemption, the U.S. Golf Association announced in a report at usga.org on May 10.

Kerr, an honorary member at Silverado Resort and Spa, is a 20-time winner during her career on the LPGA Tour and won the 2007 U.S. Open at Pine Needles Lodge and Golf Club in Southern Pines, North Carolina.

It will be Kerr’s 26th U.S. Open appearance. She has eight top-10 finishes.

“Winning the U.S. Women’s Open at Pine Needles was a career- and life-changing moment,” Kerr said in the report. “I’m grateful to everyone at the USGA for this special exemption and the opportunity to continue to play in what I consider our sport’s greatest championship. I can’t wait to arrive at The Olympic Club and tee it up in my 26th U.S. Women’s Open.”

Kerr is involved in the wine business.

She and Suzanne Pride Bryan of Pride Mountain Vineyards in St. Helena started Curvature Wines in 2008.

“Aiming for perfection in every bottle, Kerr Cellars wines were born of rigorous vineyard selection, intuitive winemaking, and meticulous attention to detail. Made in strictly limited quantities, our wines are all about capturing the very best of our region and bringing you a true taste of our little corner of Northern California.”

Speaking at a press conference on May 18 prior to the start of the 2021 PGA Championship in Kiawah Island, South Carolina, PGA of America president Jim Richerson said the golf industry, as a whole, is in a really positive place.

“Even though we had to adjust like everybody did this past year, we saw golf really kind of bounce back in record numbers. Rounds of golf were up 14% year over year. We had over a half a million new juniors that got introduced to the game … ” Richerson said in a transcript provided by ASAP Sports at asapsports.com. “ … We’re seeing those rounds continue to be at record numbers into 2021.

“It is a large industry -- $84 billion industry. Over two million jobs are created by the golf industry. We talked about record numbers this past year, not only in rounds of golf, but club sales. Now it’s really our job to keep those new golfers engaged, keep them playing the game.”

He was elected as the 42nd President of the PGA of America at the Association’s 104th Annual Meeting, the PGA announced Oct. 30, 2020.

Richerson makes his home in Scottsdale, Arizona and works as Senior Vice President of Operations for Troon, a golf management company.

Are the Green Bay Packers pretenders?

Could Arkansas keep their impressive start going against Texas A&M (-4.5)?

Could Arkansas keep their impressive start going against Texas A&M (-4.5)?

The White Sox are AL Central Champs, but can they make a run?

The White Sox are AL Central Champs, but can they make a run?

Napa High graduate Peyton Mott waits for a pitch while batting for Dominican University of California in San Rafael on Feb. 23, 2020 against Holy Names of Oakland.