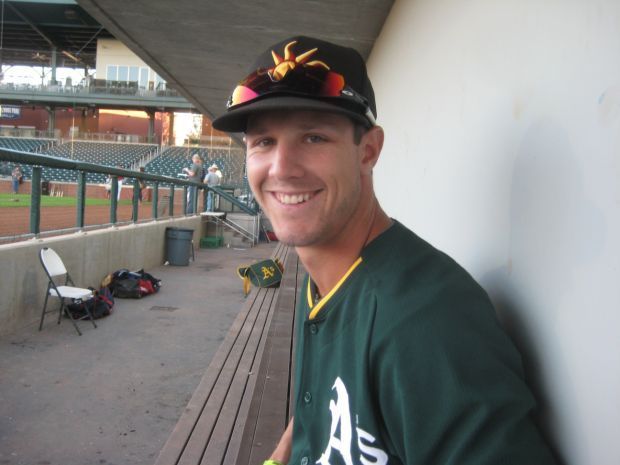 The A's are giving Herschel Mack Powell IV, nicknamed "Boog" after the Powell who starred for the Baltimore Orioles, a second chance with their Mesa Solar Sox in the Arizona Fall League. 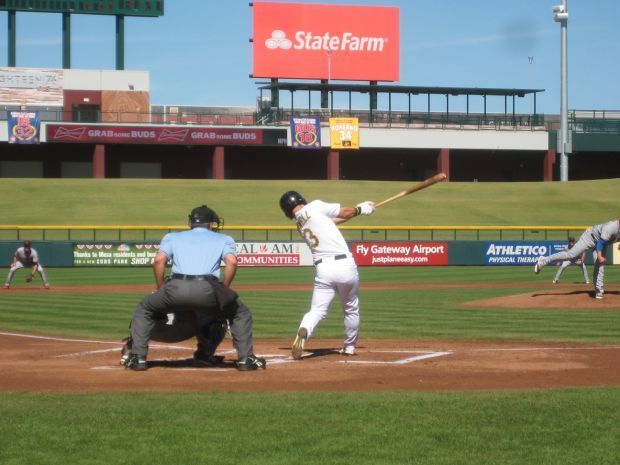 The A's are giving Herschel Mack Powell IV, nicknamed "Boog" after the Powell who starred for the Baltimore Orioles, a second chance with their Mesa Solar Sox in the Arizona Fall League.

MESA, Ariz. — If you’ve been around baseball a bit, you probably remember the interesting nickname “Boog.” It belonged to one of the stars of the 1960s and ’70s — John Wesley Powell.

He was the Baltimore Orioles’ first baseman during their exceptional years, when they were winning almost everything the American League had to offer plus the World Series in 1966 and 1970.

Mr. Powell is still around at age 73 doing occasional TV commercials and looking after his Boog Barbecue locations in Baltimore and Ocean City.

So, why all this talk about a Boog whose career in this, our national pastime, is long since over? That’s easy, at least for Oakland fans: there is another Boog on deck.

His name is Herschel Mack Powell IV. He has spent most of his 21 years in Mission Viejo, California. Early on, for reasons I‘ll explain later, his parents called him Boog.

From there he moved his baseball playing to Orange Coast Community College, where he was selected by the Athletics in the 20th round of the June 2012 draft.

Since that time he has played in 177 minor league games, collecting 202 hits in 638 plate appearances for a respectable .317 batting average.

He began the year with Oakland’s Class-A team in Beloit, Wisconsin, where he hit .335, was selected for the Midwestern League All-Star team and became the game’s Most Valuable Player.

Sixty-nine games into the season at Beloit, he was promoted to the Class-A-Advanced Stockton Ports, where in 11 games he hit .396. Things could not have been going better for Boog.

Then, on a off day in early July, he took a pill that the next day caused him to test positive for amphetamine, a violation of the Minor League Drug Prevention and Treatment Program. It immediately cost him a 50-game suspension without pay. He played only three games in Stockton after the suspension and before the playoffs.

What had been an exceptional year was ending really badly. However, just before the playoffs got under way, Boog heard from the Athletics. They invited him to take part in the Arizona Fall League.

Selection for the Fall League is no small achievement. Suddenly there was more than a little light at the end of the tunnel.

As of this writing, 22 games into the AFL season, Boog is hitting .378 in 13 games. With 10 games left to play, he is one of the top three hitters in the league. Remarkably, things are looking good.

I sat down with Boog II for a few minutes before his Mesa Solar Sox met the Salt River Rafters at Cubs Field in Mesa. I asked about how his Fall Ball experience was going.

“It’s amazing,” he said, “The games are fun. We go out and have a good time together. We’re from all different teams, but I feel like this is my team.”

I couldn’t help but ask about Beloit since that happens to be my Arizona neighbors’ hometown.

“Beloit was awesome,” he answered. “The people are great. I had never been to that part of the country before. I got my host family. They had two kids. It was incredible.”

Of course, I had to ask about the name — which he explained in some detail.

“My name is Herschel Mack. My grandpa is Herschel and my dad is Mack. For a little while they called me Little Mack, but I really didn’t like that, so my parents decided to call me Boog. The Baltimore Boog Powell happened to be a favorite of my grandpa’s. The name stuck and I’ve been Boog ever since.”

Since Boog was drafted out of community college, I asked if he had any plans for going back to school.

“I can’t do school,” he replied. “I don’t have the attention span to sit in class. Baseball is my school. I love baseball. I’m trying to learn as much as I can about the game. Right now I have coaches from other organizations teaching me all sorts of different things.”

When I asked him when he started playing baseball, he replied “My first word was ‘ball.’ I’ve been playing all my life.”

As is usually the case in Fall Ball, players don’t have many specifics about what happens next. When I asked him about the future, he told me that he didn’t expect to hear anything about next year until December or January.

What was he hoping for? “I’m guessing I’ll go back to Stockton, but I’m really hoping for Midland.” That would be Double-A Midland, Texas.

Young Boog is certainly a long way from putting together the career that Baltimore Boog did, but who knows? The passion seems to be there. We’ll see if the performance follows.

Harrell Miller can be reached at napasports@napanews.com.