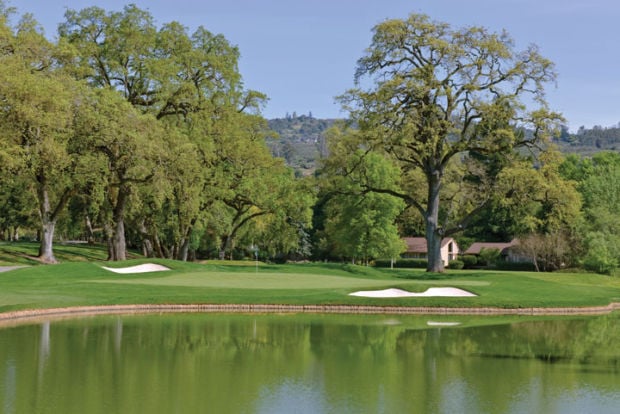 The par-3 11th hole on the North Course at Silverado Resort and Spa requires a tee shot over a pond. Silverado will host the Frys.com Open, a 72-hole, $5 million PGA Tour event, in 2014. It will be the season-opening event, marking the return of the PGA Tour to Napa. Submitted photo 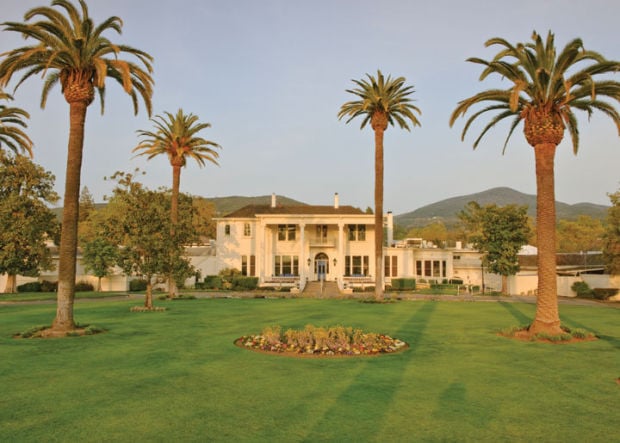 The mansion at Silverado Resort and Spa in Napa was originally a home that was built and designed by General John Franklin Miller in the early 1870s.  Submitted photo

October is one of the most exciting months on the national scene for sports.

If you’re a baseball fan, there’s the postseason, which is highlighted by the World Series.

If you’re a football fan, there are college games on Saturdays, followed by NFL games on Sundays.

If you like basketball, the NBA is getting under way.

If you like hockey, the NHL is also starting up.

If it’s golf that you prefer, then you’re in for a treat.

The Frys.com Open returns for the fourth year to CordeValle Golf Club, Oct. 7-13 in San Martin, Calif. (Santa Clara County). It’s the season-opening event on the PGA Tour’s newly structured 2013-14 schedule and offers full FedExCup points, with the winner getting an invitation to the Masters.

Formerly a Fall Series event, the Frys.com Open will move to Silverado Resort and Spa in 2014, marking the first time a PGA Tour event has been played here since 1980.

“For people that love professional golf, they’re going to support it,” said Jeff Sanchez, tournament director for the Frys.com Open. “We think there’s enough interest in PGA Tour golf that we can run a successful tournament and those core fans will come out and support the (players) that are the best in the world, that play the PGA Tour. We think interest will be high.”

The Frys.com Open will be held on the North Course at Silverado, a par-72 layout which plays 7,226 yards from the tournament tees, and will again be the first event of the PGA Tour schedule in early October 2014.

The announcement of the PGA Tour returning to Napa was made on July 3 by Johnny Miller, a member of the World Golf Hall of Fame, who is one of Silverado’s owners. Miller invited the Fry’s Electronics-sponsored tournament to play at Silverado, a 36-hole complex which has hosted both PGA Tour and Champions Tour events over the years. Tournament chairperson Kathy Kolder accepted on behalf of Fry’s.

“The connection with Johnny Miller and the support that he and the other owners have shown from the start of the initial conversations to the announcement, it’s been overwhelmingly supportive and positive,” said Sanchez. “That’s a wonderful relationship to have as we bring this tournament to the Napa Valley.

“Johnny Miller has had a friendship and professional relationship with our tournament president, Duke Butler, for many years.”

The North Course has been voted one of Golf Week’s “Top 100 Resort Courses.” Robert Trent Jones, Jr., designed the North Course, which was renovated in 2011 by Miller. The course features water crossings, elevation changes, and routing through oak, pine and redwood trees.

Silverado hosted PGA Tour tournaments from 1968 through 1980. The Kaiser International Open Invitational was played from 1968-1976 and the Anheuser-Busch Golf Classic was held from 1977-1980.

After capturing the U.S. Open in 1973, Miller went on a hot streak, winning eight tournaments in 1974, including the Kaiser at Silverado. He successfully defended his title by winning again in 1975.

The Transamerica, a Champions Tour event, was played at Silverado from 1989-2001. The final year of that Tour event was in 2002 and was the Napa Valley Championship presented by Beringer Vineyards.

The Frys.com Open tournament, which began in 2007, was previously held in Scottsdale, Ariz., at the Grayhawk Resort.

Tournament proceeds have generated $1 million to worthy charities each of the last two years and $5 million in its brief history.

“Fry’s Electronics is tremendously supportive and generous as a title sponsor,” said Sanchez. “We’re thrilled to continue to play in Northern California. We want to be a significant tournament. We want to be significant in the community in which we play.”

The tournament’s ultimate goal is to play at The Institute Golf Course in Morgan Hill, Calif., when facilities, including the conference center, are completed.

Sanchez is impressed with the North Course at Silverado, having recently played it.

“The golf course is fantastic. Strides have been made by the ownership group to improve the golf experience, to have the greens rolling at a consistent basis — and it shows.

“I love the improvements that Johnny has made. I think the players are really going to enjoy it.”

Frys.com Open to kick off 2014 PGA season at Silverado Resort and Spa

The par-3 11th hole on the North Course at Silverado Resort and Spa requires a tee shot over a pond. Silverado will host the Frys.com Open, a 72-hole, $5 million PGA Tour event, in 2014. It will be the season-opening event, marking the return of the PGA Tour to Napa. Submitted photo

The mansion at Silverado Resort and Spa in Napa was originally a home that was built and designed by General John Franklin Miller in the early 1870s.  Submitted photo