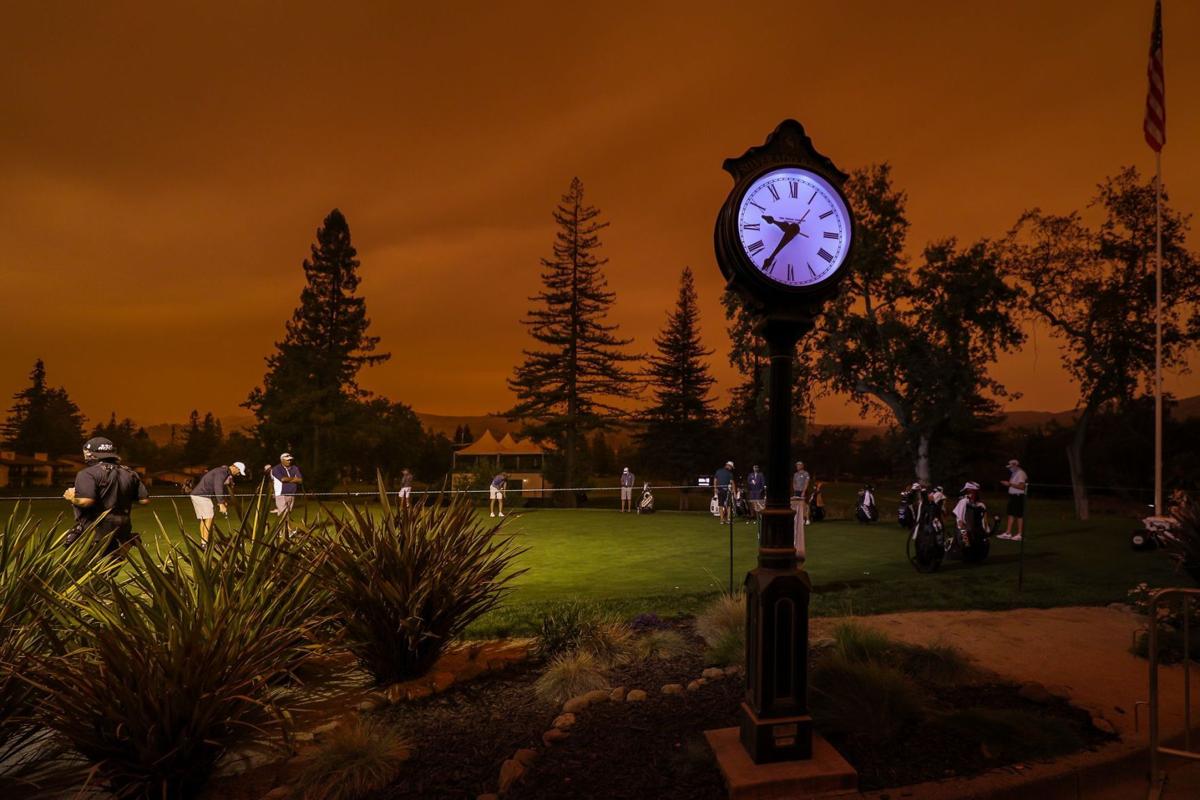 Playing under the darkness of smoke from the many wildfires currently burning in California, participants in this year's Safeway Open practice on the putting green at Silverado Resort and Spa on Wednesday. 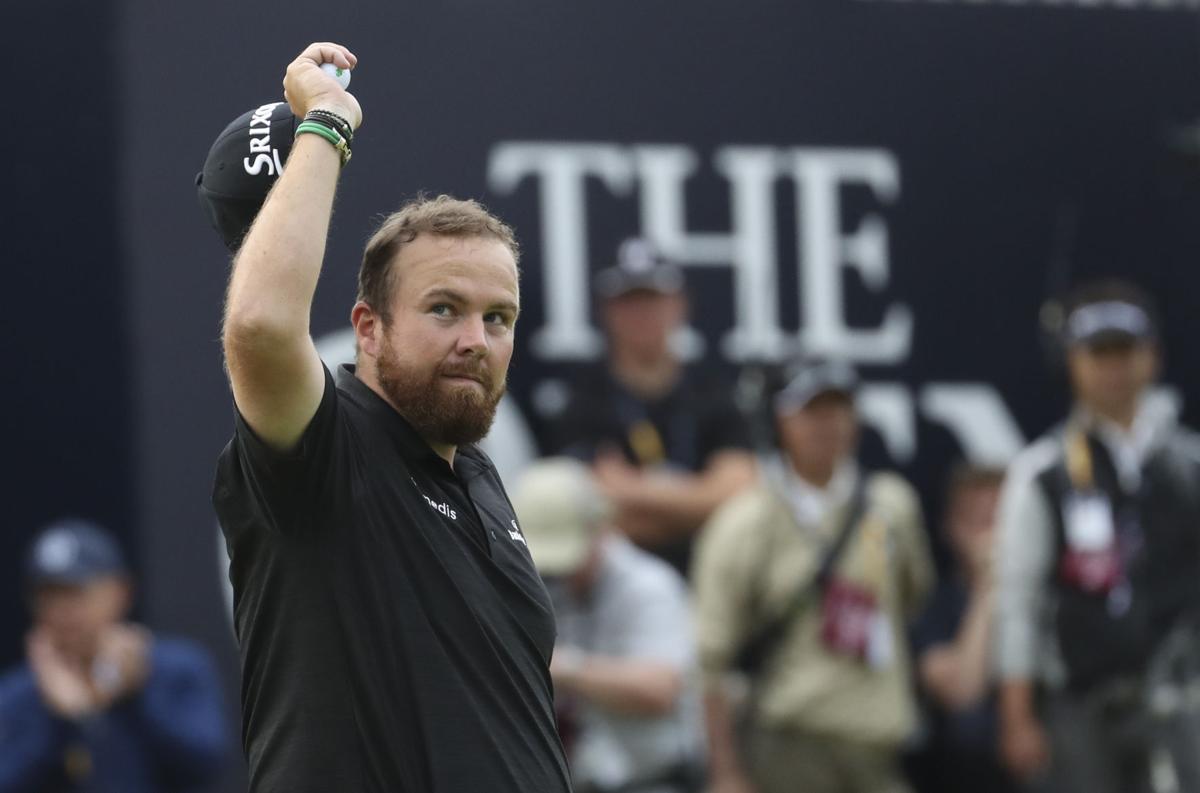 Ireland's Shane Lowry reacts to the crowd on the 18th green during the third round of the British Open at Royal Portrush in Northern Ireland in July 2019.

The lights at the driving range at Silverado Resort and Spa were on Wednesday at 12:30 p.m. due to the conditions in the area – no sun with smoky skies that made it feel like it was much earlier or later in the day than the actual time.

There was enough daylight that players in this week’s Safeway Open, the PGA Tour’s season-opening event on the 2020-21 schedule, could get out to play their practice rounds on the North Course and to also work on the range, chipping area and practice green.

Conditions were cool with no wind during a 73-degree temperature reading at 1:30 p.m.

“Dry conditions will continue along with smoky, hazy skies,” the PGA Tour reported in a weather forecast on its website, pgatour.com. “There may be some limited improvement in the visibility and air quality as winds turn south-southwesterly, but additional fires in Monterey County will allow for additional smoke/haze to filter northward into the Bay Area. The air quality is forecast to become unhealthy for sensitive groups. Expect a high temperature in the mid-80s.”

The extended forecast from the Tour: “Dry conditions will remain in place through the weekend. Low-level clouds or patchy fog will be possible prior to 8 a.m. Thursday, otherwise expect a canopy of smoke aloft to bring hazy, filtered sunshine for the remainder of the day. Scattered low-level clouds are expected Friday morning before clearing to hazy skies once again. Expect afternoon high temperatures in the 80s through the tournament rounds, with overnight low temperatures in the mid-50s.”

The forecast is prepared by meteorologist Joe Halvorson.

“These conditions that the Safeway Open is experiencing this year are unlike any I’ve ever seen before, certainly unlike any in Napa I’ve ever seen before,” said Jeff Sanders, the tournament’s executive director. “But the players are playing through it. The players are out there practicing and playing and getting their practice round in. These guys are resilient. They’ll make the best of any situation and all situations.”

Sanders is hoping for improved conditions come Thursday for the first round. The plan is for the Safeway Open to start on Thursday, said Sanders.

The tournament, presented by Chevron, will be played on the par-72, 7,166-yard Silverado North Course from Sept. 7-13. It’s the first of 50 official FedExCup tournaments that lead directly to the FedExCup playoffs in the wrap-around schedule.

There are 156 players in the tournament, a field that is led by Phil Mickelson, Jordan Spieth, Sergio Garcia and Shane Lowry. This is the seventh time in eight years that the Safeway Open has served as the season opener since the Tour went to a wrap-around schedule.

“We’re just hoping that the south wind picks up and blows the smoke out of here and things get better over the next few days,” said Sanders. “But, again, Mother Nature will make that decision. Let’s hope that good things happen between now and tomorrow. The plan right now is to play.”

The air quality in Napa was moderate, at 84 as of 1:30 p.m., according to the Bay Area Air Quality Management District index.

“The air quality index really wasn’t that bad today,” said Matt McEvoy, the tournament director. “It was just so dark. We’ve never seen weather like this, so dark, where it’s 10 or 11 in the morning and feel like it’s dusk.

“It’s hard for some of the players to see the balls land on the driving range. But the conditions didn’t stop them from practicing today.”

But if Wednesday was an actual tournament round, it may have been a different story.

“It might have been tough if today was a competition day,” McEvoy said. “Hopefully we get some of the wind out of the south and it’s not an issue (Thursday morning).”

McEvoy said if the first round was Wednesday, it definitely would be have been delayed due to the darkness.

McEvoy said PGA Tour staff is evaluating the weather and visibility. The last starting time is 2 p.m. on Thursday.

“I know these guys are used to fog, but this is a little bit different than that,” said McEvoy. “It’s just hard to see the ball in the air.”

Sergio Garcia of Castellon, Spain, a 10-time winner on the PGA Tour and No. 44 in the Official World Golf Ranking, was asked about the weather.

“You kind of feel a little bit in the eyes,” said Garcia, who won The Masters in 2017. “Your eyes get a little itchy, maybe a little tired in a way. I think that the most important thing is drinking a lot of water while you’re out there on the course.”

“I’ve always wanted to come and play here at Silverado in Napa,” said Garcia. “Really nice golf course, just great visuals off the tees. It kind of reminds me a little bit of like Torrey Pines or Riviera, those kind of looks on the tees and stuff. Beautiful trees, beautiful high trees, really amazing oaks and pine trees and stuff. It’s a very pretty course and it’s in very good shape.”

Shane Lowry of Clara, County Offaly, Ireland, who is No. 28 in the Official World Golf Ranking, is playing in the Safeway Open for the first time. It’s the PGA Tour’s season-opening event during the 2020-21 schedule.

“I got here on Sunday. It’s quite a nice place and I’m looking forward to the week,” Lowry said in a pre-tournament interview.

Lowry was asked for his impressions of the North Course at Silverado after getting in a practice round.

“It’s good. I can imagine there’s a lot of birdies, but it gets quite firm and fast,” he said. “Poa annua greens are tricky to putt on. Yeah, it’s a nice course and I like what I see so far, so hopefully I can play OK this week.”

Lowry had one Top-10 and four Top-25 finishes with nine made cuts in 13 events during the 2019-20 season. He tied for sixth in August at the World Golf Championships-FedEx St. Jude Invitational.

He advanced to the FedExCup Playoffs for the second straight season and third time overall, but missed the cut at The Northern Trust in August. He finished the season at No. 123 in the FedExCup rankings.

“It’s nice to get to an event. And look, this is a PGA Tour event. This is a big event in its own right, so I want to come here and play well,” said Lowry.

“Obviously I’m thinking about trying to get a bit of form going into Winged Foot next week, but at the end of the day I’m a proud golfer and I want to play well this week. For me, this is the only week that matters right now,” said Lowry. “Then, when I get to Winged Foot next Monday I’ll start to think about that, but obviously this week first and foremost I want to do well.

“Doing well in any PGA Tour event is not easy, so I’m focused really on trying to play as good of golf as I can this week and see where my game is at going into next week. But it will be really nice to have a good week this week.”

The Safeway Open is an official FedExCup event, one of 12 events during the fall portion of the schedule.

“I’m grateful that the PGA Tour has events all year round, that we get the opportunity to go play in big events for a lot of points and a lot of money,” said Lowry. “We still have 500 FedExCup points for the winner here this week, which is the same as some of the really big events on the schedule. It gives lads a chance to kind of come here and get their season off to a good start.

“I think the Fall Series is good. This year, I’m planning on playing a little bit and I’m looking forward to hopefully getting a few FedExCup points on the board and getting my season kick-started.”

Lowry joined the PGA Tour in 2015 and has two wins.

Due to the COVID-19 pandemic, the Safeway Open announced in mid-July that that the event will not have spectators in attendance.

In previous years, the event has featured concerts, a food and wine pavilion, and other on-site venues for beverages and food.

Playing under the darkness of smoke from the many wildfires currently burning in California, participants in this year's Safeway Open practice on the putting green at Silverado Resort and Spa on Wednesday.

Ireland's Shane Lowry reacts to the crowd on the 18th green during the third round of the British Open at Royal Portrush in Northern Ireland in July 2019.