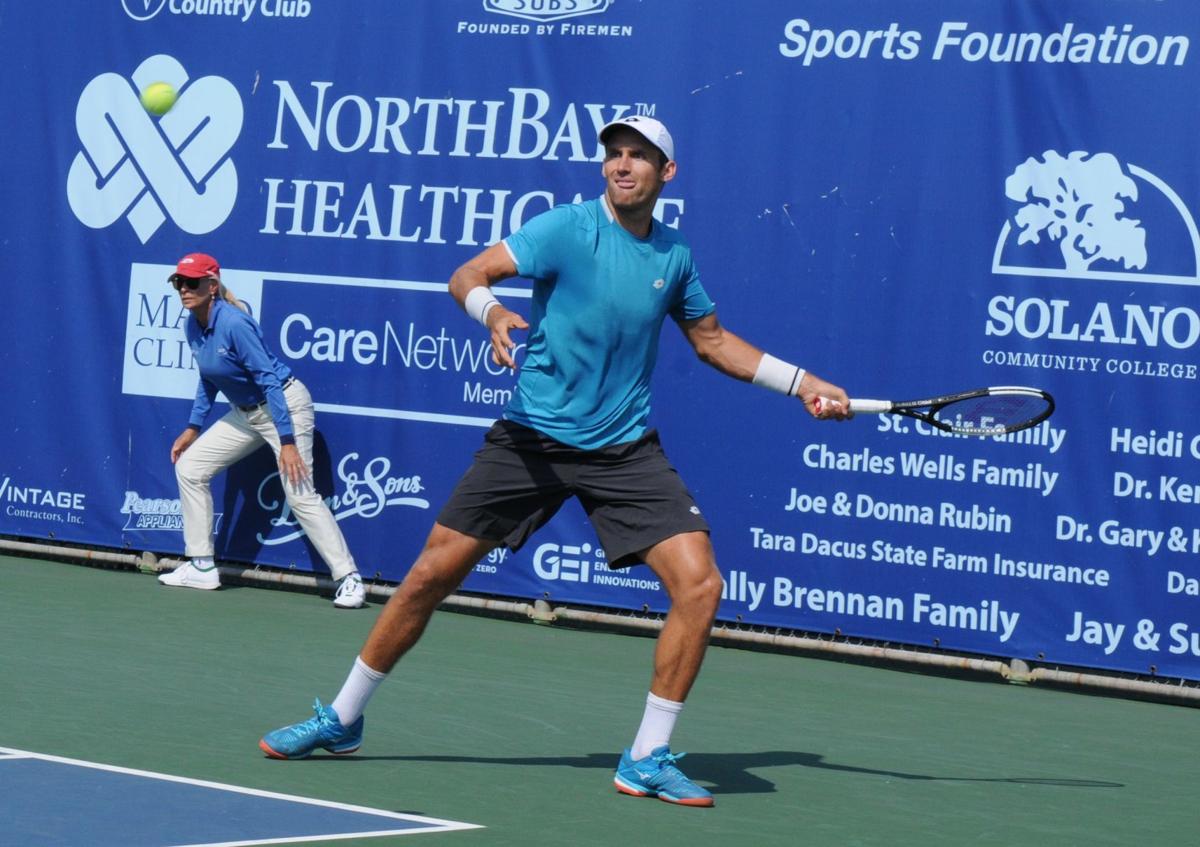 Kevin King returns a shot during his 6-3, 7-6 (10) win over Paul Polansky of Canada at the NorthBay Healthcare Men's Pro Championship in Fairfield on Friday. 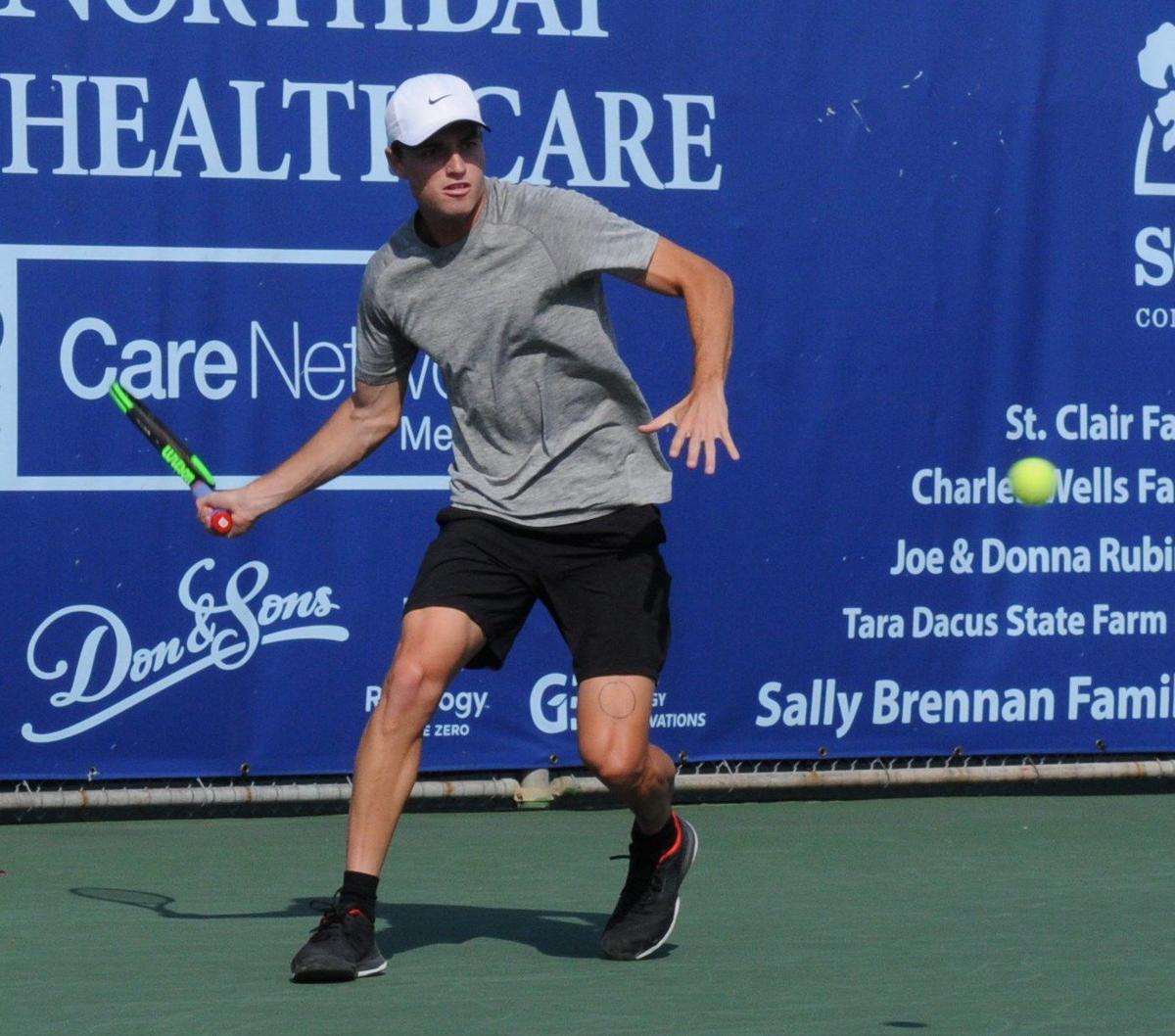 Christopher O'Donnell of Australia returns a shot during his 6-2, 6-3 win over Jack Draper of Great Britain on Friday in Fairfield. 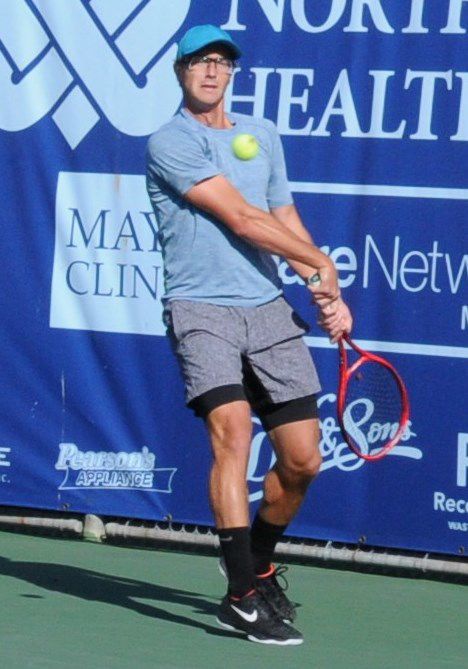 Peter Polansky of Canada fires a return during his 6-4, 6-4 win over Nicola Kuhn of Spain during their third-round match in Fairfield on Thursday.

Kevin King returns a shot during his 6-3, 7-6 (10) win over Paul Polansky of Canada at the NorthBay Healthcare Men's Pro Championship in Fairfield on Friday.

Christopher O'Donnell of Australia returns a shot during his 6-2, 6-3 win over Jack Draper of Great Britain on Friday in Fairfield.

Peter Polansky of Canada fires a return during his 6-4, 6-4 win over Nicola Kuhn of Spain during their third-round match in Fairfield on Thursday.

FAIRFIELD — The continued resurgence of a seasoned Australian brought an end to the strong run on an up-and-coming teen from Great Britain.

Christopher O’Connell, a 25-year-old from Sydney, made quick work of 17-year-old Jack Draper 6-2, 6-3 Friday in a quarterfinal match at the NorthBay Healthcare Men’s Pro Championship. O’Connell, ranked No. 192, displayed a powerful serve with 17 aces and had pinpoint control by knocking in 33-of-37 first serves (89 percent).

O’Connell had spent the bulk of the 2019 playing in clay matches, so this was a rare hard-court appearance. He was out much of 2018 with a knee injury, but appears to be on the mend with three straight wins on the Solano Community College courts in Fairfield. All three thus far have come in straight sets.

“I felt awesome the first two matches and it continued on into the semifinals,” O’Connell said. “I need to keep that up the next two rounds.”

Draper, the 2018 Wimbledon boys runner-up, has made quite an impression in his first two matches in Fairfield. He took down veterans Jack Sock and Donald Young, Jr., in a pair of evening matches. He just didn’t seem to have the command that he did under the lights against the talented Americans.

“He’s a seriously good young player,” O’Connell said of Draper. “He’s got a big serve, big game. I’ve been watching him the last two nights and he’s been playing some good tennis.”

Semifinal Saturday is on tap with a pair of singles matches, followed by two doubles contests. All the action begins at 11 a.m. The Tennis Channel will televise both singles semifinals around the world, and Sunday’s final.

O’Connell will now take on Kevin King. The other semifinal will feature the winner of Friday’s afternoon matches between Taro Daniel of Japan and Brandon Nakashima of the U.S., and the night match between top seed Steve Johnson of the U.S. and Darian King of Barbados.

Kevin King, from Atlanta, was the first to punch his ticket into the final four. The former Georgia Tech All-American outlasted Peter Polansky of Toronto 6-3, 7-6 (10) in the first singles quarterfinal. The match featured many lengthy rallies with both players banging strong groundstrokes at each other, waiting for the other to stumble.

“Peter is obviously a very good player but also a great competitor,” Kevin King said. “He made some adjustments there in that second set and it became really physical out there towards the end of the match. With a 12-10 tiebreaker, that could have gone either way so I’m happy to have closed that out.”

The 28-year-old Kevin King came in ranked 399th in the world. Polansky is three years older 31 and he was 163rd. King was able to help himself with 12 service aces while knocking down 75 percent of his first serves.

Verdugo and Novikov knocked off second-seeded Evan King (U.S.) and Hunter Reese (U.S.) 7-6 (4), 6-7(2), 10-4 Friday morning. The first two sets went to the tiebreakers before Vergugo and Novikov took command in the third set to 10 points.

Saturday is also Net Generation Day. Local instructor Michael Friedman will be offering a free introduction to tennis for children 12 and under from 9:30 a.m. until 11. Net Generation is the USTA’s outreach program started with the idea to grow the game across the country.

On Thursday, Polansky reached the quarterfinals with a 6-4, 6-4 win over No. 10 Nicola Kuhn of Spain. He did it by displaying some powerful groundstrokes from the baseline on the courts at Solano Community College in Fairfield.

Polansky has been grinding in the ATP Challenger Series since 2007, currently sitting at 163rd in the world with just over $1.5 million in career prize money. The 31-year-old has four Challenger titles to his credit, including one in September in Columbus, Ohio.

“This season has been OK,” he said. “My ranking has dropped a little bit from where it was (a career-best 110th). A couple of good results and I’ll be back where I want to be.”

Good fortune did find Polansky in 2018. He is the only player on record to earn spots in all four Grand Slam draws in the same year, thanks to “lucky loser” designations. That means he lost in qualifying but was able to earn a spot in the main draw in each major after someone else had to withdraw.

Johnson made quick work of Evan King for a 6-3, 6-2 win. Johnson came in as a wild card. He is an elite talent, currently ranked 99th in the world, but has been as high as 21st (2016) and has nearly $6 million in prize money. Johnson’s 29 years old and lives in Redondo Beach.

Draper of Great Britain, fresh off his Tuesday evening win over Jack Sock the night before, impressed with a 6-3, 7-6 (1) win over Young.

Ninth seed Darian King of Barbados picked up a solid 6-4, 6-2 win over Blaz Rola of Slovania. He is ranked No. 171 and has represented his country in Davis Cup and at the 2016 Olympics. Darian King was to square off against Johnson in Friday night’s feature match.

Kevin King of Atlanta took down second-seeded Denis Kudla in quick fashion, 6-2, 6-3. Kevin King was a two-time All-American at Georgia Tech before turning pro in 2013. His ranking should climb a bit from its 399th spot if he manages a strong showing.

Japan’s Taro Daniel, the fourth seed, was pushed on Thursday but continued his solid performance locally after returning from Tokyo and a quarterfinal finish at the recent ATP 500 Japan Open. Daniel went three sets, including a second set tiebreaker, for a 1-6, 7-6 (2), 6-3 win over 16th seed Maxime Cressy of the United States.

University of Virginia standout Brandon Nakashima, 18, moved in the quarters with a 7-6 (5), 7-5 win over sixth seed James Duckworth of Australia. Nakashima entered the tournament at 709th in the world. Chris McConnell (Australia), meanwhile, steamrolled by seventh seed Emilio Gomez (Ecuador) 6-1, 6-2.

In doubles, it was the fourth-seeded team of Andre Goransson (Sweden) and Sem Verbeek (Netherlands) over Nathan Pasha (U.S.) and Max Schnur (U.S.) 3-6, 6-4, 10-6. Wild-card players Brandon Holt (U.S.) and Deiton Baughman (U.S.) advanced after a tough 6-2, 4-6, 10-6 win over American pair Jamie Cerretani and Korey Lovett. Darian King and Polansky were scheduled for a doubles match in the afternoon, but won by walkover.

The NorthBay Healthcare Men’s Pro Championship benefits the Dr. Chris Cammisa Tennis and Education Foundation. The nonprofit helped start the men’s and women’s tennis programs at Solano College, and also bring the sport and an education program to underserved youth throughout Solano County.