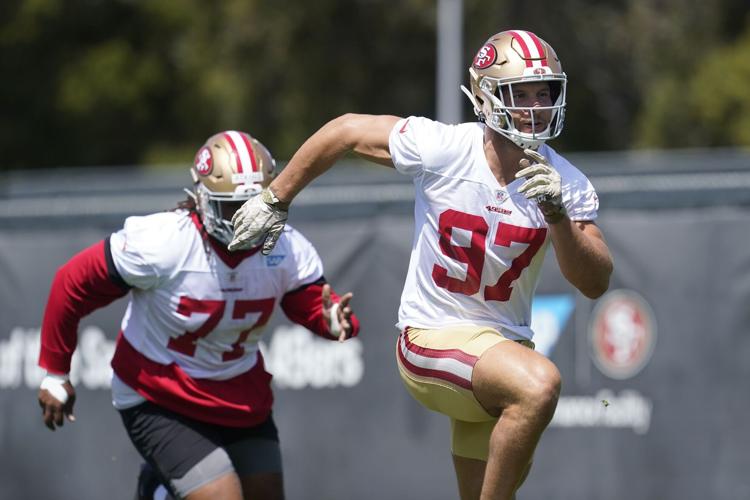 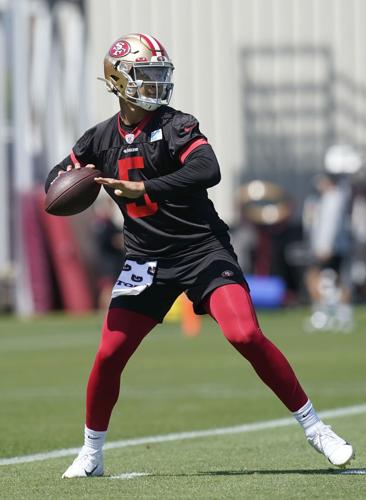 SANTA CLARA — Nick Bosa spent his offseason away from the San Francisco 49ers enjoying his new boat and getting into even better shape than before rather than worrying about breaking the bank with his next contract.

After spending the voluntary portion of the offseason working out in Florida with his brother Joey and taking his new boat out on the water for his “extracurricular" activity, Bosa's return to the Niners this week for mandatory minicamp was a welcome sight.

Even though head coach Kyle Shanahan said the team has not started negotiations on a new long-term deal with Bosa that could top $30 million a year in value, he expects Bosa to remain in San Francisco for the foreseeable future and Bosa has no concerns about the timing of any talks.

“I’ve just been focusing on getting better,” Bosa said. "I’ll let my agent worry about that.”

Bosa's value has only grown after he posted 15 1/2 sacks in the 2021 regular season and four more in the playoffs. The 49ers already picked up his $17.9 million fifth-year option for 2023 and Bosa will likely look to come close to Aaron Donald's new $31.7 million a year price tag from his new deal with the Los Angeles Rams.

Bosa said he got leaner this offseason when he was able to focus on working out rather than rehabilitating following reconstructive knee surgery that sidelined him for almost the entire 2020 season.

“It was just a better overall offseason, because I was able to enjoy myself a little bit, because I wasn’t just grinding and then resting like I needed to for my knee," he said. “Now the knee is doing great. I’m able to go about my life normally, which is nice.”

Bosa's return from the knee injury provided a big boost to the Niners last season, giving the team the dominant pass rusher that was missing in 2020.

Bosa built on his Defensive Rookie of the Year season from 2019 when he had nine sacks in the regular season and four more in the playoffs by becoming one of the top defensive players in the game.

So his return to the team this week was a welcome sight.

“It’s great to have him here just around the guys,” defensive coordinator DeMeco Ryans said. “That’s the biggest thing for Nick being around the guys, building that camaraderie during this time here in the offseason. It’s about those guys just working together, being out there, going to dinner together, whatever. As much time as they can spend together to become as tight as possible as a defensive unit and as a team, that’s what matters most and Nick is looking great.”

Trey Lance dropped back on successive plays and launched deep strikes to Ray-Ray McCloud and Jordan Matthews that showed off an element the 49ers hope to add to their offense this season.

With Jimmy Garoppolo far away rehabilitating an injured shoulder before a likely trade or release this summer, Lance ended the team's minicamp fully entrenched as the 49ers' starting quarterback based on his play and leadership this spring.

“I feel like Trey has done a really good job in really taking on all the different parts of being QB1,” fullback Kyle Juszczyk said. “I feel like I’ve seen improvement on the field as far as his performance. We’ve seen a lot of big plays out there. As a leader I just feel like he’s stepped up. He’s just a very natural leader, a guy that people gravitate towards. It’s all been good so far."

This is what the 49ers were hoping to get out of Lance when they traded three first-round picks to take him third overall in the 2021 draft despite only one season as a starter at lower-level North Dakota State.

After spending his rookie season learning behind Garoppolo and making only two starts, Lance has taken ownership of the offense this offseason and the 49ers hope that carries over into strong play when the season starts in three months.

“I was in a little bit of a weird spot last year,” Lance said. “I wasn’t necessarily playing, so I was in a weird spot I felt like last year, but that’s how it goes. That was the situation I was in. I tried to embrace my role and make the most out of it."

Lance's teammates have seen a marked difference in his demeanor this offseason as he has taken on the leadership role that comes with the territory for a starting quarterback in the NFL.

Despite being only 22 years old, has won over his older and more accomplished teammates.

Lance’s rookie season was impacted by a finger injury in the final exhibition game against the Raiders that didn’t fully heal until the offseason.

He was used in a situational role a few times early in the season and made two starts when Garoppolo was hurt, struggling at times in a Week 5 loss at Arizona and showing some improvement in a Week 17 win over Houston.

For the season, he completed 41 of 71 passes for 603 yards, five TDs and two interceptions, while also running for 168 yards and a score.

Lance spent the early part of the offseason working with his trainers tweaking his mechanics, although Lance said most of the changes were minor.

“I know everybody talks about the throwing motion and the slow-mo videos and all that, but it wasn’t as much as you guys think,” Lance said. “I know everyone has their opinion on it. But for me, it’s about getting the ball out accurately. It’s a lot different working away from the building because you’re working primarily as a thrower and not necessarily as a quarterback.”

Shanahan said the minor work on mechanics is something all the great quarterbacks do on their own during the offseason.

But he's been more focused on how Lance has improved his approach and decision-making on the practice field.

“When they’re with us, it’s about playing the game,” Shanahan said. "It’s about how to get the ball out on time, how to not take a sack, how to move coverages, where to look with your eyes, things like that. But those are things real detailed quarterbacks never stop doing."

NFL: McElhenny, Hall of Fame halfback with 49ers, dies at 93

Hugh McElhenny, the elusive Hall of Fame halfback who starred in the San Francisco 49ers' “Million Dollar Backfield” in the mid-1950s, has die…

NORTH PLAINS, Ore. — LIV Golf’s first U.S. event was set to begin Thursday, with a group of survivors and families who lost loved ones in the …

Growing up as the son of a major league ballplayer, Terry Francona knew to speak only when he was spoken to. Baseball clubhouses are more welcoming now and not just to toddlers raiding the bubble gum bin. Some of those tykes turn out to big league ballplayers themselves.

NEW YORK — Giancarlo Stanton has seen trailing teams lose their fight a few times in his 13 big league seasons. Just not with these New York Yankees.

CROMWELL, Conn. — Xander Schauffele shot a 3-under 67 on Saturday to take a one-stroke lead over good friend and playing partner Patrick Cantl…

NBA Draft: Kings nab versatile Murray at No. 4; Warriors start at 28 with Baldwin

Tony Siragusa, the charismatic defensive tackle who helped lead a stout Baltimore defense to a Super Bowl title, has died. He was 55.

SAN FRANCISCO — The Golden State Warriors wanted to keep their roster together to make a run at a repeat.

CHARLOTTE, N.C. — O. Bruton Smith, who emerged from North Carolina farm country and parlayed his love of motorsports into a Hall of Fame caree…