Austin Bautista was looking to hit a high draw and work his tee shot around the redwood trees on the left at the par-4 17th hole, which was playing 290 yards, during the final round of the Napa Open on Friday at Silverado Resort and Spa.

His drive clipped one of the trees and landed well short of the green.

Bautista’s reaction as he was clinging to a one-shot lead late in the day? He turned to his caddie and girlfriend, Chiara Calcioli, and said “Let’s win this.”

That’s exactly what Bautista, a native of Sydney, Australia and now a resident of Clearwater, Fla., did on a gorgeous fall day with temperatures in the mid-60s with clear and sunny skies.

He hit a bump and run shot to 10 feet and two-putted for par.

Bautista closed it out by making a birdie putt from 12 feet on the par-5, 18th hole, giving him a round of 2-under 70 and a two-shot win in the $47,500 Golden State Tour event on the North Course. Bautista earned a $10,000 first-place check after completing the three-day, 54-hole mini-tour event at 11-under 205. Silverado is the presenting sponsor of the Napa Open.

He started out by shooting 6-under 66 on the North Course on Wednesday and backed that up with a 3-under 69 on the South Course.

“He played great. He had some guys charging and he played clutch in the end, even though he did have a couple shaky drives,” said Andy Miller, the tournament founder and host. “Just to hang in there when you have the lead is tough to do, and he did it.”

Forty-four players advanced to the final round following the 36-hole cut. The tournament had a sold-out field of 87 players, both professionals and amateurs. It was the third year of the Napa Open. The rainy weather earlier in the week made for softer conditions in the fairways, with not as much bounce or roll.

“It was playing long off the tee. But today the greens firmed up a little bit and got really quick,” said Miller, Silverado’s Design Director and a four-time NCAA All-American at BYU. “So it was easy to run a 10-, 20-footer four or five feet by if you didn’t watch your speed. The same thing with your chips. If you’re short-sided, it wasn’t easy to get it up and down because you know the ball was releasing and rolling out, because those we’re pushing 12 on the (Stimpmeter).”

It was Bautista’s second Golden State Tour win of the week in Napa County. He reacted to his birdie putt on No. 18 with a fist pump while holding up his putter.

He had battled cold, rain and windy conditions on Tuesday to win the Purefect Shootout, a $9,000, two-day, 36-hole tournament at Chardonnay Golf Club & Vineyards in American Canyon. Bautista, who learned about playing in wind at Bonnie Doon Golf Club in Australia, shot 5-under 139 for the 36-hole event with rounds of 67 and 72 to secure the $2,500 first-place prize. He won by four strokes the tournament put on by Purefect Golf, a Napa company run by Zack Sims and Brandon Duncan.

It’s the fourth win of the year for Bautista.

He shot 19-under 197 and captured the Temecula Creek Championship, a Golden State Tour event in August.

“He scooped both of them up – that’s great playing,” said Sims. “He looked solid throughout five days of golf.”

Bautista took a two-shot lead into the final round on the par-72, 6,793-yard layout, a tough test with its very narrow fairways, deep rough, and firm and fast greens that are very challenging.

“There were some tough pins, some that I didn’t expect on some of the par threes,” said Bautista. “But ultimately, I played within myself. I knew what holes I could go for and what holes I needed to make par. So I definitely was happy with how I played.

Bautista got to 12-under through the 11th hole.

There were so many key shots in his final round:

* The bunker shot on the par-3 15th hole he hit to within tap-in distance to save bogey. “That was a huge, huge moment, because a double (bogey) there puts me tied for the lead. So just making bogey there was crucial,” he said.

* The birdie putt on No. 18. “The putt was actually really quick. It was straight downhill, sliding to the right,” he said. “I didn’t want it to get away and I wanted to hit a good stroke. And so I picked my line.”

* The approach shot that he hit out of the right rough on No. 18.

Bautista birdied No. 5 on the front nine. He had three birdies and two bogeys on the back nine.

Bautista took time to thank his caddie, Calcioli, who was alongside every step of the way, for all five rounds.

“I didn’t hit the ball great, but I really putted well,” he said. “I kind of knew the greens from obviously playing the Safeway Open and that comfort level I had was definitely nice. So I think that was a big, big confidence boost for me, especially getting over 10-, 15-foot putts, which are pretty tricky. Knowing the greens a little bit definitely helped.”

Sims finished alone in fifth place, shooting 69-68-73 – 210, a 6-under total, and won $2,900. He got it to 8-under but a double-bogey 6 on No. 10, where he had trouble from off the green, dropped him lower on the leaderboard. He left his third shot short of the green and after getting on the green on his fourth shot, he two-putted.

“A couple of bad breaks. I probably could have played it a little better. But it happens,” he said. “My front 9 was super steady today. I was just hoping to bring that into the back nine. I just had a rough start on 10. But other than that, I played OK.”

He came right back, responding with a birdie on No. 11.

The low 19 finishers were paid.

The Golden State Tour, founded in 1982, “offers a professional golf tournament environment each week and partners with the Outlaw Tour to host events across California, Arizona and Nevada,” according to bluegolf.com/pro/programs/gstour/membership.

“In the early years, GST branded itself as a ‘developmental tour’ where players could hone their skills in preparation for QSchool. Entering our 39th season, the ‘developmental’ aspect is long gone. Today, players are highly-skilled, ultra-competitive and ready for the next level. GST offers a professional golf tour/tournament environment each week – hosting events at quality sites across CA, AZ and NV.”

NBA Draft: Warriors use No. 2 pick on Wiseman

The Golden State Warriors selected 7-foot-1 center James Wiseman with the No. 2 pick in the 2020 NBA draft Wednesday night.

NFL: McCown with Texans 19 seasons after hoping to join team

HOUSTON — In 2002, the Houston Texans were an expansion team preparing for their first season and Josh McCown had just wrapped up his college …

LAS VEGAS — After Derek Carr led the Raiders to the brink of another victory over the defending Super Bowl champions, Las Vegas head coach Jon…

KANSAS CITY, Mo. — It takes a lot to get Big Red to turn red.

ST. SIMONS ISLAND, Ga. — Moving on from a devastating summer of losing his child, Camilo Villegas made a 10-foot birdie putt on his final hole… 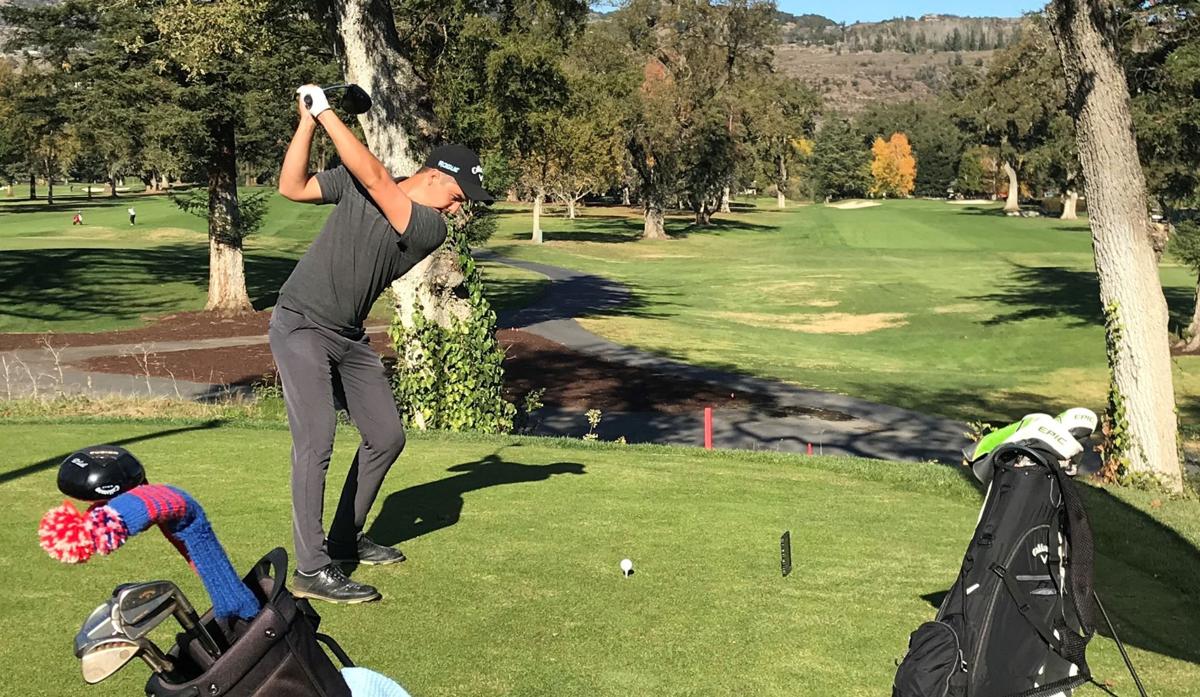 Cameron Park's Corey Pereira, shown teeing off on Silverado Resort and Spa's North Course during the Napa Open on Friday, finished in a three-way tie for second place. 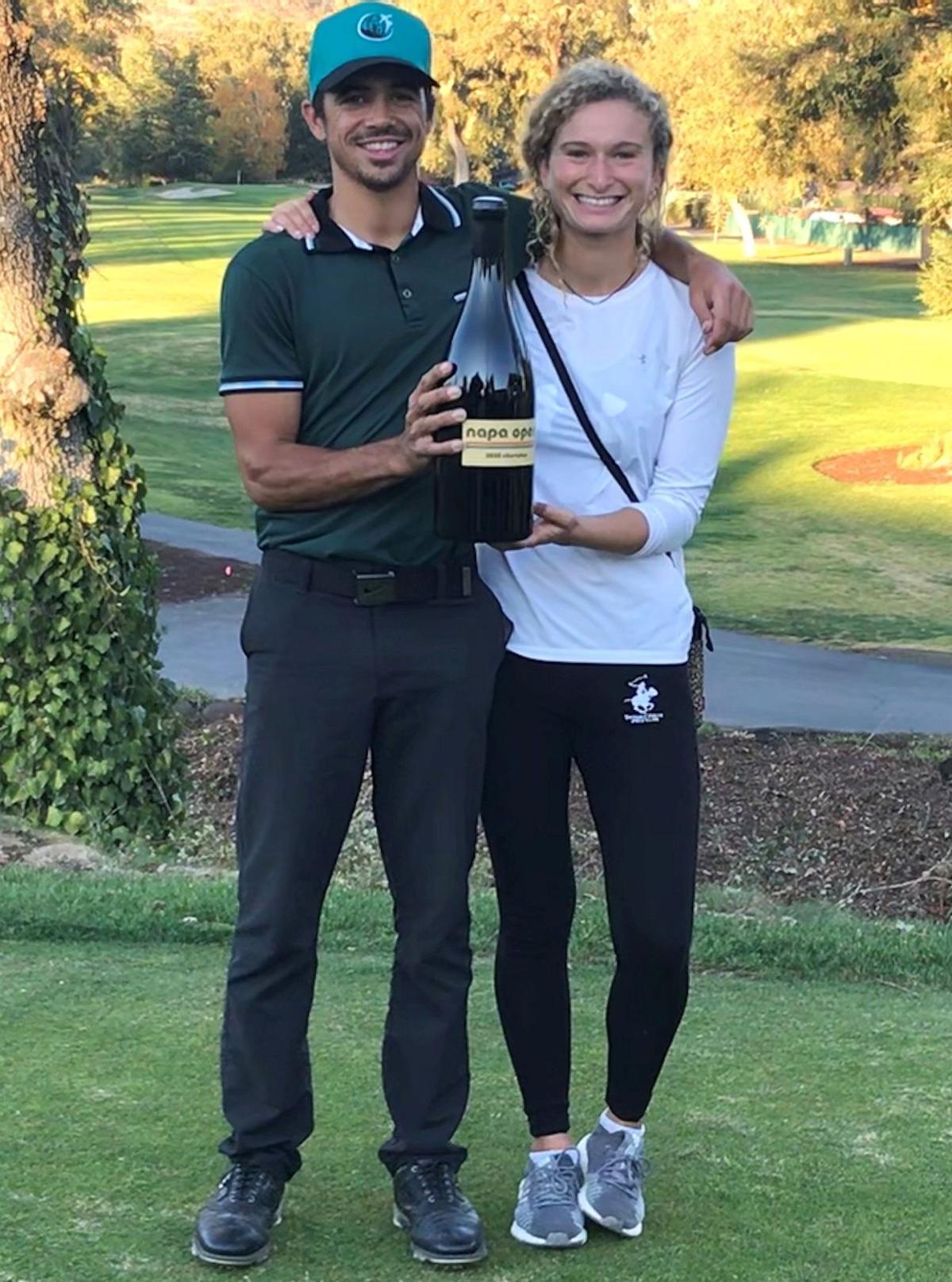 Austin Bautista, of Clearwater, Fla., and Chiara Calcioli, his caddie and girlfriend, celebrate their Napa Open victory Friday at Silverado Resort and Spa. 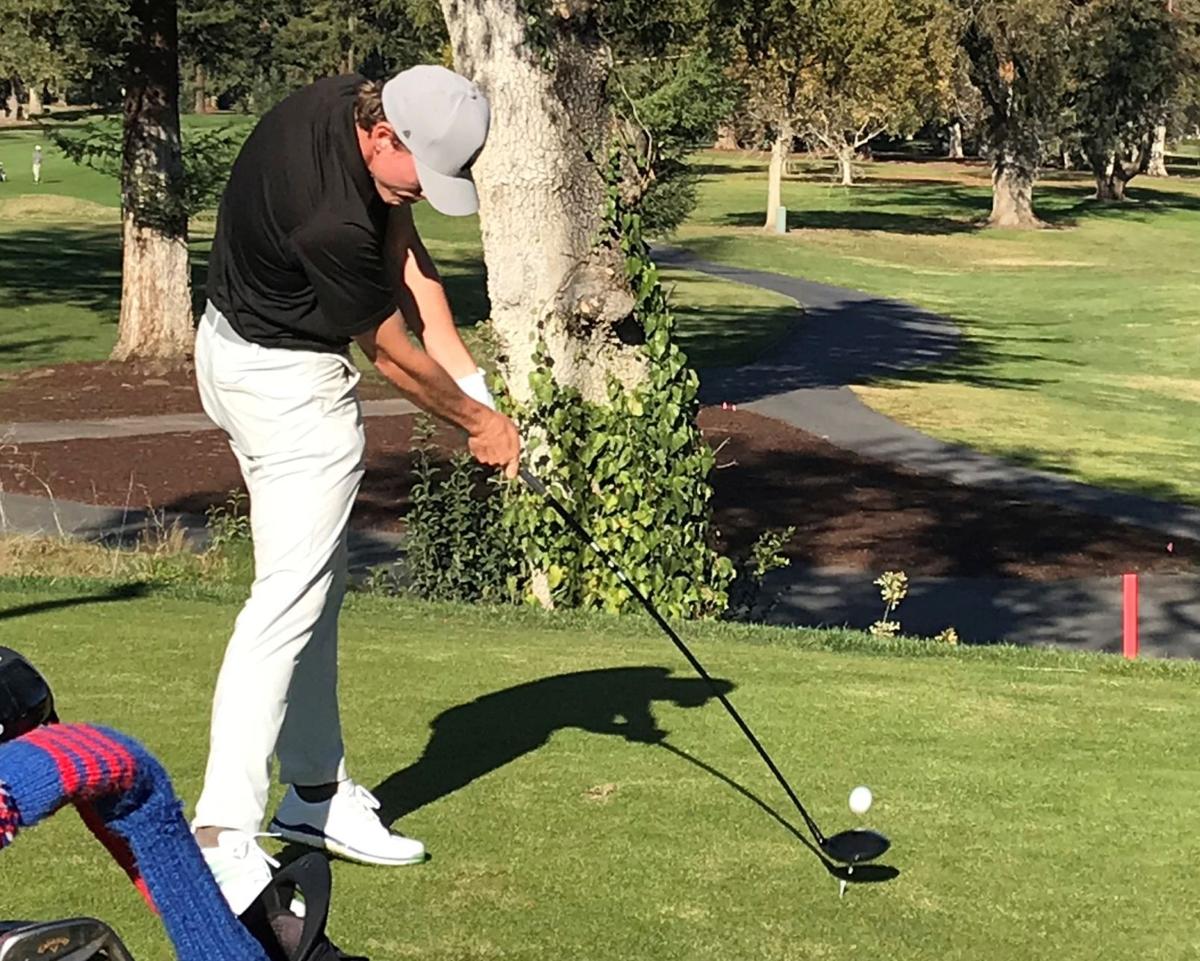 Napa's Zack Sims hits a drive on Silverado Resort and Spa's North Course during the Napa Open on Friday. 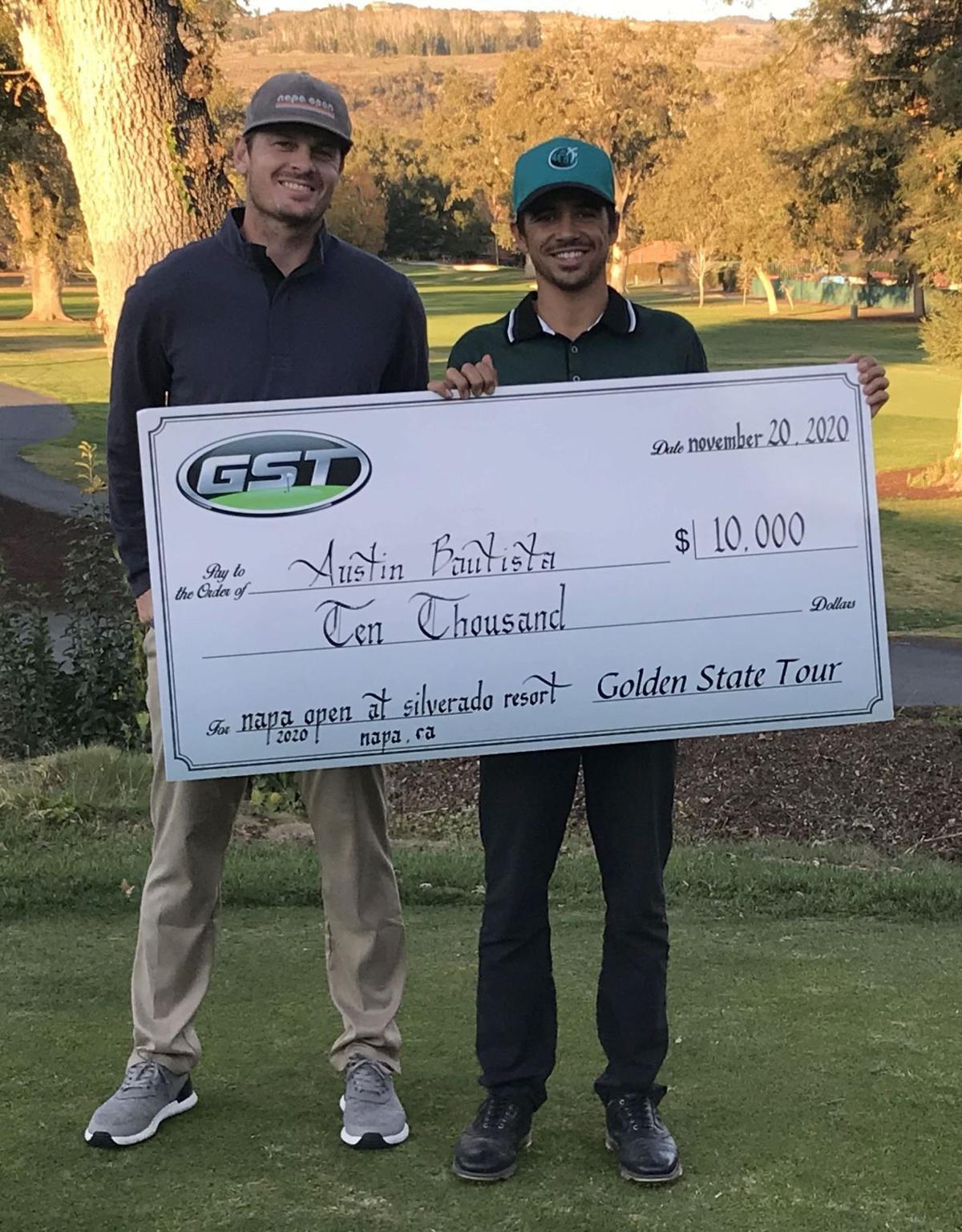