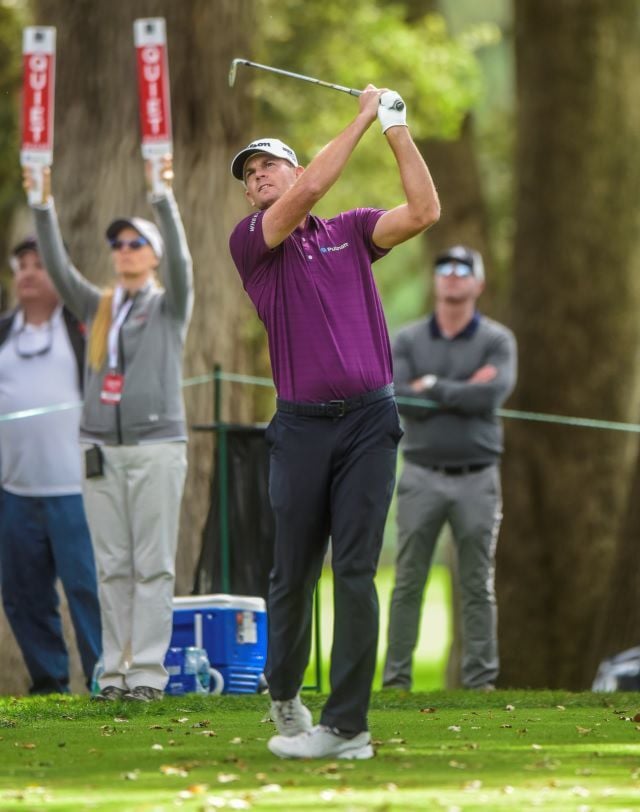 Brendan Steele, the 2016 and 2017 champion of the PGA Tour's event at Silverado Resort and Spa in Napa, tried for a three-peat in 2018 but finished 53rd. The tournament will known as the Fortinet Championship when it returns Sept. 13-19. 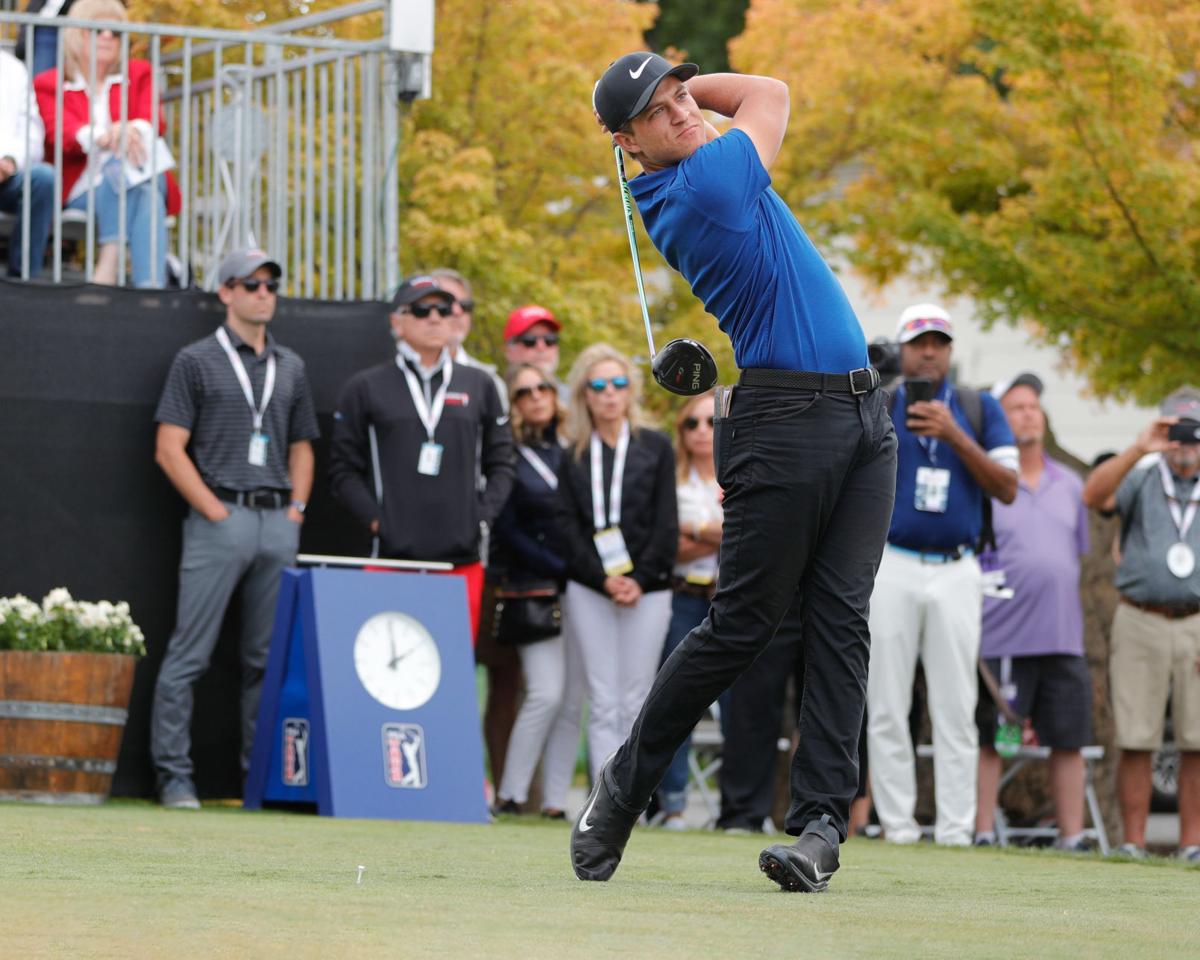 Cameron Champ tees off on Sept. 29, 2019 during the final round of the most recent PGA Tour event to be held on the North Course at Silverado Resort and Spa, which the Sacramento native won. The tournament will return in September as the Fortinet Championship.

The PGA Tour will continue with its stop at Silverado Resort and Spa in Napa for the next six years.

Fortinet, a global leader in broad, integrated and automated cybersecurity solutions, will become the title sponsor of the Napa Valley tournament, to be named the Fortinet Championship, the PGA Tour announced today.

The six-year agreement keeps the PGA Tour event at Silverado through 2026. Johnny Miller, a World Golf Hall of Fame member and 25-time winner on the PGA Tour, is one of the owners at Silverado.

The Fortinet Championship replaces the Safeway Open, which was played at Silverado for five years. Safeway elected not to continue as the title sponsor.

“We are thrilled to welcome Fortinet to the PGA Tour family with the Fortinet Championship leading off the 2021-22 FedExCup Regular Season in September,” Tyler Dennis, PGA Tour President, said in a press release. “Napa is an extremely popular stop for our players, their families and our fans. We look forward to having Fortinet help grow the event to maximize charitable impact for the Napa Valley community.”

The Fortinet Championship will feature a field of 156 players and will carry a $7 million purse. The winner will receive 500 FedExCup points.

Silverado has hosted PGA Tour events over the last seven years, starting with the Frys.com Open, from 2014-2015. The Tour moved from CordeValle Golf Club in San Martin to Silverado in 2014.

According to a press release, net proceeds from the Fortinet Championship will benefit nonprofit organizations in the areas of STEM, women and minorities in technology, as well as veterans reskilling programs.

“Fortinet is excited to partner with the PGA Tour as both our organizations are committed to trust and creating exceptional experiences – ensuring players and customers are set up for success to overcome even the most trying conditions and challenges,” John Maddison, Executive Vice President of Products and Chief Marketing Officer at Fortinet, said in a press release. “This partnership will benefit our community, customers and local nonprofit organizations. We look forward to hosting the Fortinet Championship in Napa.”

“Fortinet is excited to align with a world-class brand in the PGA Tour. A global leader in charitable community impact, the PGA Tour is an elite partner platform for technology and business services brands. This week of amazing golf will be paired with the award-winning culinary and wine experiences we’ve come to expect from Napa.”

For more information, go to www.fortinet.com/fortinet-championship.

Silverado has a long history of hosting professional, collegiate, amateur and junior golf events over the years.

Its history of hosting the PGA Tour dates back to 1968.

The Transamerica and Napa Valley Championship, PGA Tour Champions events, were played from 1989-2002.

Silverado has also been the site of the PGA Tour’s national qualifying school.

The Silverado winner’s circle features many of the greatest players in golf, including:

Over the last seven years, the PGA Tour event has been won by Sangmoon Bae (2014 Frys.com Open),

It was Cink’s first win in 11 years, dating back to when he beat Tom Watson in a four-hole aggregate playoff to capture The Open Championship in 2009 at Turnberry Resort’s Ailsa Course in Ayrshire, Scotland.

“I definitely had a lot of emotions out there today,” Cink said after his win in Napa. “I just was overcome a few times with a feeling of gratitude and just feeling like how fortunate I am to be in the position that I’m in.

“Somehow, I was able to also focus when I needed to, so I had a little mix. It was the right mix for me today because I did hit a lot of good shots – a ton of great shots when I needed to.”

It was Cink’s seventh Tour victory. At age 47, he became the oldest winner on the PGA Tour since Phil Mickelson in 2019 at the AT&T Pebble Beach Pro-Am.

“I’m just so thankful, so grateful that I was in this position and able to bring home another PGA Tour event,” said Cink, a resident of Duluth, Georgia.

“I’m still working like crazy to try to be the best golfer I can be, but there was probably a time where I felt like maybe age might have caught up with me and maybe I might have had my last win out here. But I wasn’t ready to concede that. I just knew that if I got back into position again, that if the time’s right, I can hang in there. That’s what it really is all about.”

It’s the sixth time in seven years that Silverado served as the season-opening tournament of the Tour’s wraparound schedule. It’s first of 50 official FedExCup tournaments during the 2020-21 schedule that culminate with the FedExCup Playoffs.

“This is a really special place,” said Cink, who had eight birdies, including a chip-in birdie on the par-3, 11th hole, and one bogey in the final round. “I love being in Napa and I just had a really phenomenal time this week. And on top of that, my golf ball was pretty agreeable most of the way, so it was a really great experience top to bottom all week.

“I had a lot of good sort of vibes. It just felt like the right place for me to be up near the top of the leaderboard. Then when it came time for me to kind of wrestle the bull to the ground, we were able to keep our composure, and get the job done.”

Due the COVID-19 pandemic, spectators were not allowed to attend. The only people on the golf course, other than players and their caddies, were tournament staff, media, volunteers and family members of players.

Champ, who is from Sacramento, called his win at Silverado in 2019 “one of the best golfing moments of my life.” He completed the event at 17-under 271.

“I have a lot of great memories here,” he said. “This is as close as it gets for me for a home event. It’s the climate and the grass, as it’s similar to what I grew up on with course style and course set-up.

“I have that comfortability, being close to home, with just all the other environments, how certain holes just kind of flow and flow together,” said Champ. “It just fits me. And it just gives me just a little more confidence.

“I’m very familiar with it. It fits my eye, it fits everything.”

WHERE DOES “HAPPY GILMORE” RANK AMONG BEST SPORTS MOVIES?

Yountville author offers lessons on 'civility' for these troubled times

Brendan Steele, the 2016 and 2017 champion of the PGA Tour's event at Silverado Resort and Spa in Napa, tried for a three-peat in 2018 but finished 53rd. The tournament will known as the Fortinet Championship when it returns Sept. 13-19.

Cameron Champ tees off on Sept. 29, 2019 during the final round of the most recent PGA Tour event to be held on the North Course at Silverado Resort and Spa, which the Sacramento native won. The tournament will return in September as the Fortinet Championship.