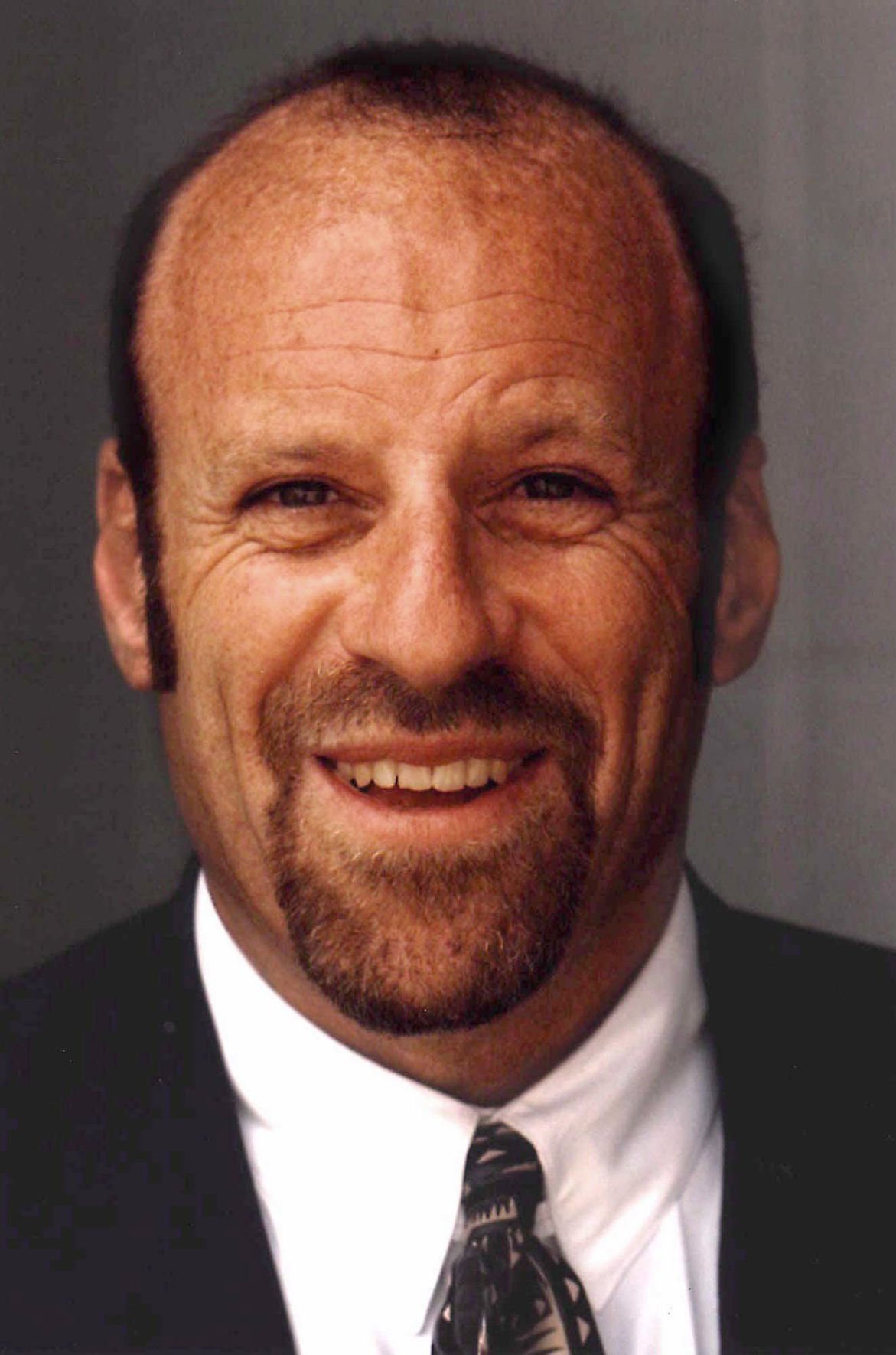 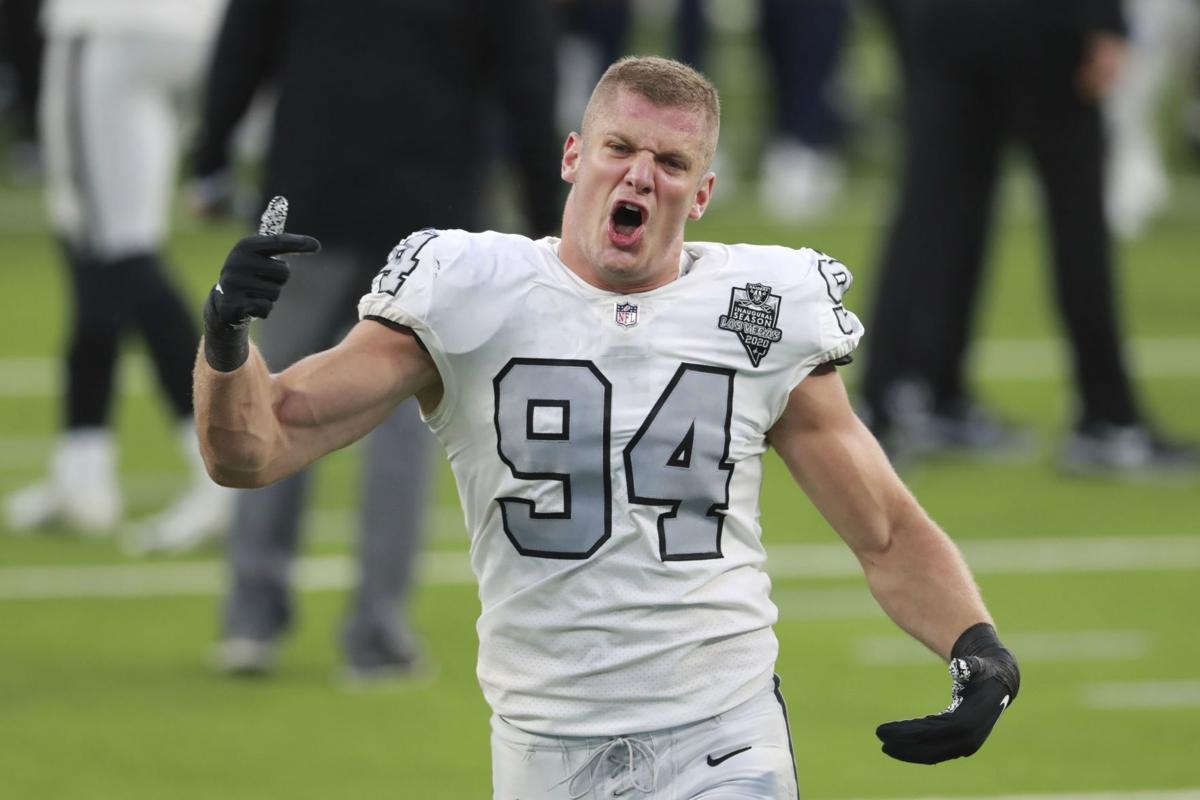 Raiders defensive end Carl Nassib celebrates after Las Vegas holds on to defeat the Los Angeles Chargers on the last play of the game on Nov. 8, 2020 in Inglewood, Calif.

In a 59-second video Monday, Raiders defensive lineman Carl Nassib became the first active player in the NFL’s 101-year history to publicly declare he is gay and in the bargain, burst through a barrier that went unchallenged for decades.

The end wasn’t accompanied by a bang or a whimper, but rather a cheerful, matter-of-fact announcement that he hoped would make life easier for other players, but especially kids wrestling with the same decision.

“I just want to take a quick moment to say that I’m gay,” he began. “I just think that representation and visibility are so important. I actually hope that like one day videos like this and the whole coming-out process are just not necessary ... ”

A day later, his wish was essentially granted.

Five years ago, there would have been a half-dozen TV trucks parked at the curb and a few dozen reporters milling about on the sidewalk in front of Nassib’s home for days. Whether it’s a sign of real progress or simply a reflection of our ever-shrinking attention spans, sports headlines have already turned their attention elsewhere. Either way, the next NFL player who comes out probably won’t even get a follow-up call.

That shouldn’t in any way detract from Nassib’s announcement. It took him more than half of his life to gather up the courage — “Sadly, I have agonized over this moment for the last 15 years,” he said — but only a matter of moments for his teammates, rivals, coaches and the league itself to trip an avalanche of congratulations on making the right decision.

“The NFL family is proud of Carl for courageously sharing his truth today,” NFL Commissioner Roger Goodell said in a statement.

“Proud of you, Carl,” the Raiders tweeted, and the Chargers quickly amplified with a retweet that added, “some things are bigger than a rivalry.”

The list of players who voiced their support began with Darius Stills and Maxx Crosby, teammates who line up alongside Nassib, and quickly spread to guys like Saquon Barkley and Julian Edelman, players whom Nassib & Co. will be looking to crush the second after the ball is snapped.

That shouldn’t surprise anyone, either. Last October, the league launched a series of initiatives highlighting Pride Month, including a public service announcement celebrating former players who had come out, expanding partnerships with GLAAD and The Trevor Project and even debuting a pride-themed NFL shield.

We’ll never know whether it was a genuine commitment to inclusivity or growing public pressure that motivated the boys’ club in the NFL’s executive suite. But when the most popular, powerful sports league in North America puts its stamp of approval on anything happening outside the lines of a field, it’s a safe bet it has been chewed over for hours, vetted by lawyers and audience-tested to the nth degree. And it didn’t hurt, of course, that the league had what amounted to a practice run when Michael Sam, a defensive lineman at Missouri, announced he was gay on the eve of the 2014 draft.

Sam was selected by the Rams in the seventh round, then cut before the team broke training camp and signed to the practice squad with the Cowboys. He never played in a regular-season game there, either, but even that short stint demonstrated that acceptance of an openly gay player had reached the tipping point.

“thank you for owning your truth,” Sam tweeted, “and especially your donation to the @TrevorProject.”

Nassib, who has logged five NFL seasons with three different teams, credited players like Sam for paving the path he followed.

“I stand on the shoulders of giants,” he said. He also asked that the media “give me some space as I navigate this exciting time in my life.”

Nassib put $100,000 of his own money behind the Instagram post in a contribution to The Trevor Project, a non-profit organization devoted to preventing suicides among LGBTQ youth.

“Studies have shown,” he said, “that all it takes is one accepting adult to decrease the risk of an LGBTQ kid attempting suicide by 40%. Whether you’re a friend, a parent, a coach, or a teammate — you can be that person.”

Nassib has already stepped forward. If his example encourages more people to become “that person,” his legacy will be bigger and more enduring than simply being the “first.”

Will the Houston Texans be the worst team in the NFL at the end of the season?

From players getting COVID-19 vaccinations to relaxed coronavirus protocols to lineup issues, particularly at quarterback, the NFL faces a mul…

NEW YORK — New York Jets assistant coach Greg Knapp was hit by a car while riding his bicycle in California in a “horrific” crash over the weekend.

SANTA CLARA — All-Pro middle linebacker Fred Warner has signed a five-year extension with the San Francisco 49ers, taking him through the 2026…

NFL: Ex-49er Sherman tried to break in at in-laws'

Raiders defensive end Carl Nassib celebrates after Las Vegas holds on to defeat the Los Angeles Chargers on the last play of the game on Nov. 8, 2020 in Inglewood, Calif.