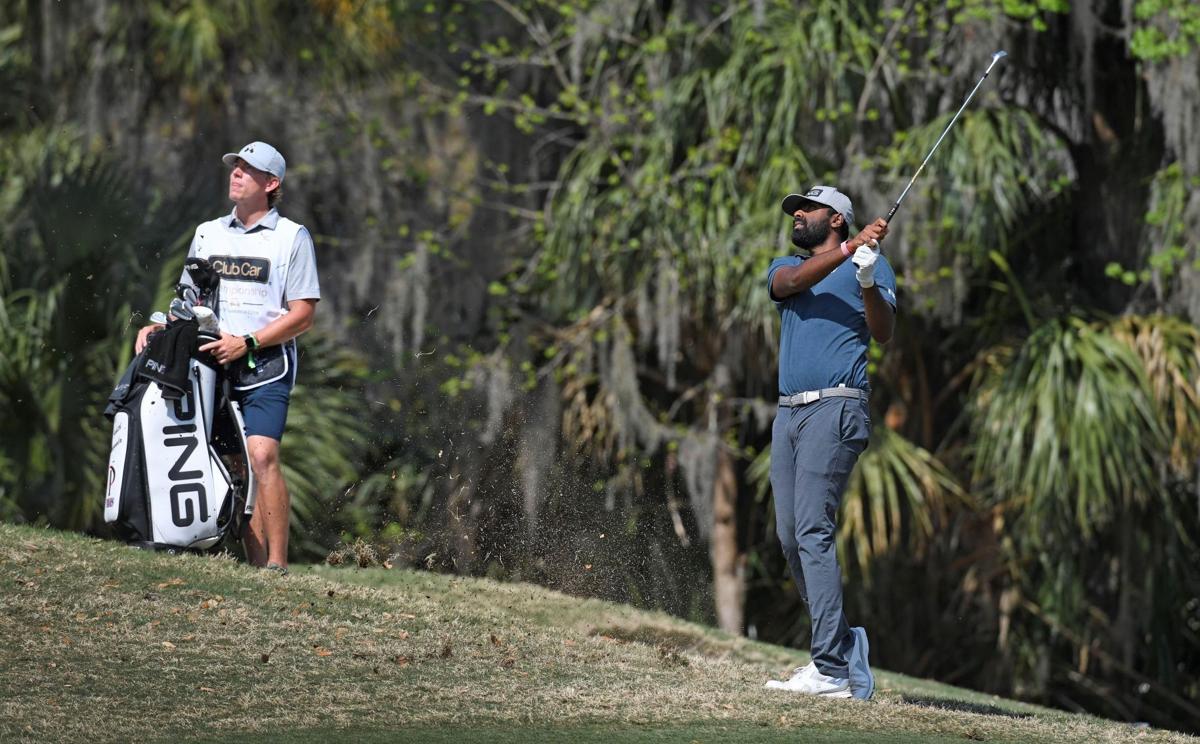 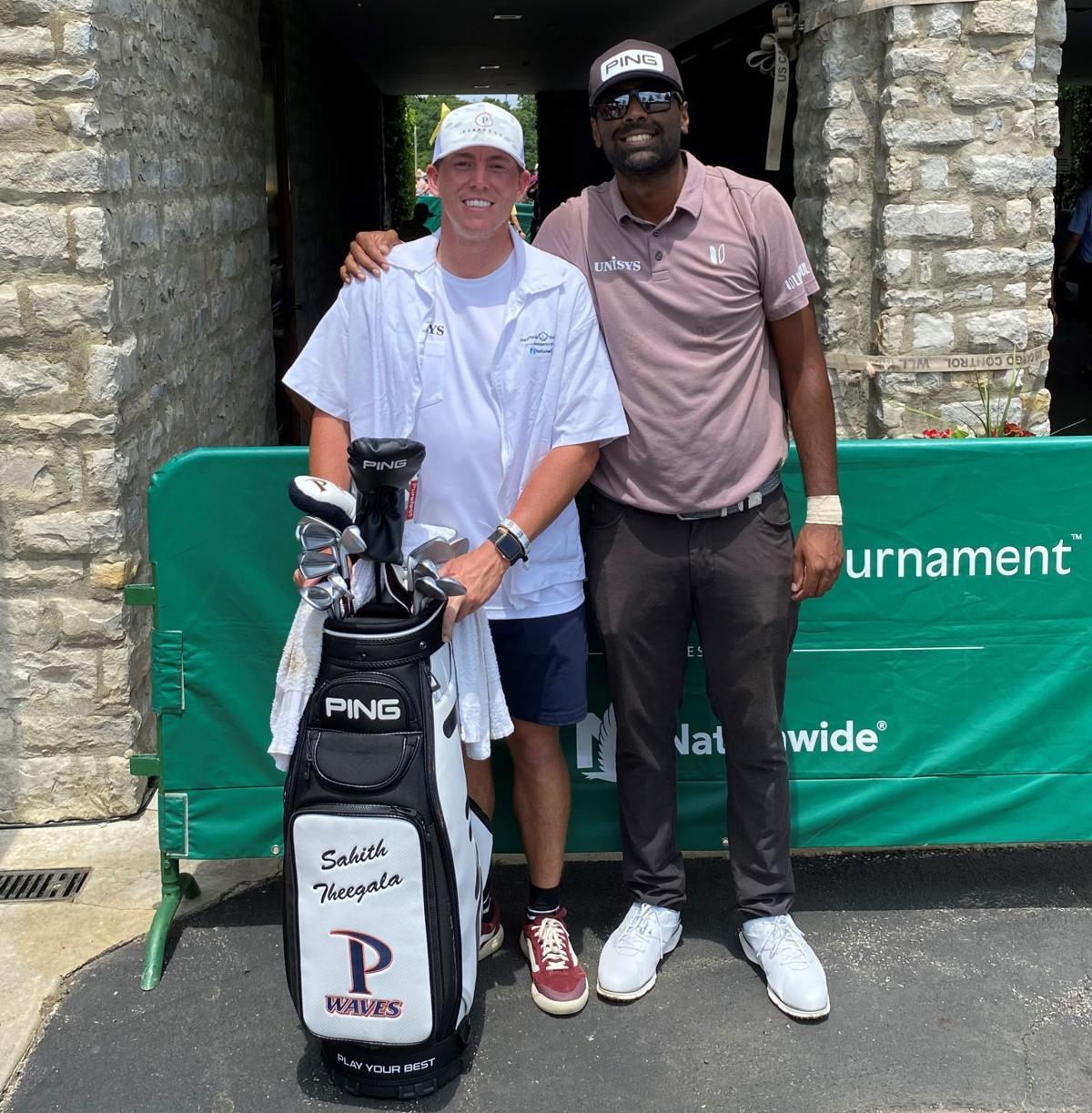 Napa's Zack Sims, left, will be caddying for PGA Tour player Sahith Theegala, right, in the U.S. Open this Thursday through Sunday in La Jolla.

Sahith Theegala got to Silverado Resort and Spa early after receiving an unrestricted sponsor invitation to play in the Safeway Open last year.

One of the first people to welcome Theegala when he got into town, two weeks before the PGA Tour event, was Zack Sims, who was working in the golf department at Silverado.

Theegala — a three-time All-American at Pepperdine, the winner of the 2020 Jack Nicklaus Award as the top college player in the country, and the West Coast Conference co-Player of the Year in 2017 — wanted to use the time to see and play the North Course and get a feel for the par-72, 7,166-yard layout in advance of the event.

“I was working outside staff at Silverado. He came up two weeks early to play a practice around,” said Sims. “I saw him and I asked if he wanted someone to play with or to chat about the course, that we can go out and play or whatever.”

Theegala and Sims set up a time to meet and play the following day. Theegala also met Aaron Beverly, who was working in the department at the time, and the three of them spent some time together, playing the course, known for its narrow fairways, very challenging greens, and overall length.

“We all played and got along,” said Sims, a 2012 Napa High School graduate, who was an All-Monticello Empire League player all four years for the Grizzlies.

Beverly caddied for Theegala when he tied for 14th place at the Safeway Open, with rounds of 71, 68, 64 and 70 for a 15-under 273 total last September. It’s the season-opening event for the PGA Tour’s 2020-21 schedule. It was Theegala’s first PGA Tour event as a professional and his seventh start on the PGA Tour. He played in four Tour events last year as a non-member.

Theegala also played in the Napa Open in November, shooting 72-67-68 — 9-under 207 and finishing tied for second in the Golden State Tour event on the North Course at Silverado.

“He played really well in college. He’s kind of transferring into the pro circuit just as well. Keeping the good momentum and the good vibes is what it’s all about.”

A few months ago, Theegala contacted Sims prior to playing in his first Korn Ferry Tour event of the season. He was looking for a caddie, and he was asking Sims if he was interested.

Sims was all in.

“We’ve just been rolling, week to week,” said Sims. “Our scheduling has been crazy, just because it’s on the fly pretty much.”

With Sims on the bag, Theegala has played in six Korn Ferry Tour events and two PGA Tour events this year.

Theegala, who is from Chino Hills, Calif., got into the U.S. Open by advancing in local and final qualifying events.

There were 131 players for eight spots in local qualifying on May 17 at Lakeside Country Club in Houston. He shot a 4-under 68 and tied for third.

From there, he went on to Springfield Country Club, the site of a final qualifier in Springfield, Ohio. He was one of seven players to advance, finishing seventh and securing a spot in the U.S. Open, with rounds of 71 and 66 for a 3-under 137 total. He won the first hole of a sudden death playoff by making a par and beating out David Gazzolo of Riverside, Calif., and Ryan Brehm of Mt. Pleasant, Mich. There were 77 players for seven spots.

“It was awesome,” said Sims. “It was raining the first 10 holes of the day, and so that just made the course harder. It was the first time seeing the course, so it was like a double whammy. We have to deal with the weather. It was kind of a tough first nine and then the weather got better. He grinded on the back nine. It was crucial to be below the hole.

“It was just kind of surreal how it all went down. He made it in. It kind of sank in as we were driving back to the hotel — it’s pretty sweet, that we’re going to be playing in a major.

“We’re both just super excited and grateful for the opportunity, for sure.”

Playing as a non-member, Theegala, 23, has made the cut in all six Korn Ferry Tour events that he has played in this year. He has one Top-10 and three Top-25 finishes. A look at where he has placed:

* April 18, MGM Resorts Championship at Paiute, tied for ninth as a Monday qualifier.

* May 2, Huntsville Championship, tied for 21st.

* May 9, Simmons Bank Open for the Snedeker Foundation, tied for 47th.

* He missed the cut at the Charles Schwab Challenge after shooting 73-71 – 144 at Colonial Country Club in Fort Worth, Texas in late May.

He will now be playing in his second U.S. Open. He missed the cut in 2017 at Erin Hills in Wisconsin after rounds of 77 and 75.

“It means so much. I can’t wait to have family and friends out there watching. I’m really excited,” Theegala said in an interview with Golf Channel on June 7.

Theegala estimates he has played at least 16 rounds at Torrey Pines over the years, including three Junior Worlds, when he was 15 through 17 years of age.

“I love the golf course and can’t wait to get there,” he said.

After Monday qualifying as an amateur for the 2017 Genesis Open, a PGA Tour event at Riviera Country Club in Pacific Palisades, Calif., he tied for 49th. It was his Tour debut.

He is a graduate of Diamond Bar High School in Los Angeles County and at one time was No. 3 in the World Amateur Golf Ranking.

He made his pro debut during an Outlaw Tour event in June of 2020.

He will get in three practice rounds, Monday through Wednesday, at Torrey Pines.

“It’s just kind of believing in himself. I try to tell him that as well, and to try to keep his mind in the right spot throughout the day, because obviously, when you’re playing in rough and wind in tough conditions, it’s pretty easy to get sidetracked with your thoughts. It’s just trying to keep him focused and locked in.”

Sims was named to the Division II PING All-West Regional team by the Golf Coaches Association of America for Holy Names University, a private school in Oakland, in 2018.

Sims also works in the golf department at Silverado and plays in events on the Golden State Tour, a mini tour.

Beverly, who was named to Sacramento State’s All-Decade Team for men’s golf (2010-2020), is now working as an assistant golf professional at Valley Hi Country Club in Elk Grove. Beverly, who is from Fairfield, was selected as the Big Sky Conference Player of the Year two straight years.

Golf: Lee6 ties golf majors record for lowest round of 61

EVIAN-LES-BAINS, France — Jeongeun Lee6 tied the golf majors record for the lowest round ever when she carded a 10-under-par 61 at the Evian C…

From players getting COVID-19 vaccinations to relaxed coronavirus protocols to lineup issues, particularly at quarterback, the NFL faces a mul…

Golf: Pajaree and Noh share Evian lead at 6 under after round 1

Golf: Lee6 up by five strokes in France

EVIAN-LES-BAINS, France — The day after making golfing history, Jeongeun Lee6 extended her Evian Championship lead to five strokes after a 3-u…

In a year of firsts in the majors, Collin Morikawa might have topped them all.

NEW YORK — New York Jets assistant coach Greg Knapp was hit by a car while riding his bicycle in California in a “horrific” crash over the weekend.

SANTA CLARA — All-Pro middle linebacker Fred Warner has signed a five-year extension with the San Francisco 49ers, taking him through the 2026…

Napa's Zack Sims, left, will be caddying for PGA Tour player Sahith Theegala, right, in the U.S. Open this Thursday through Sunday in La Jolla.