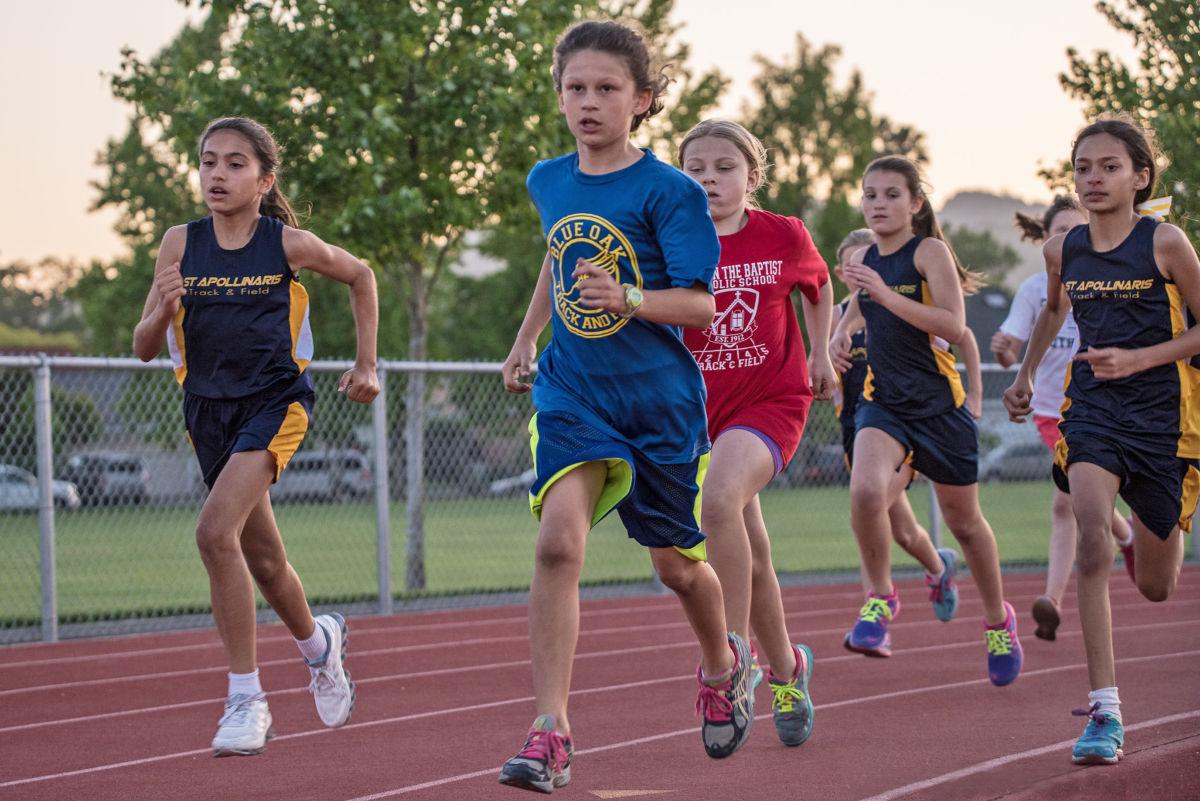 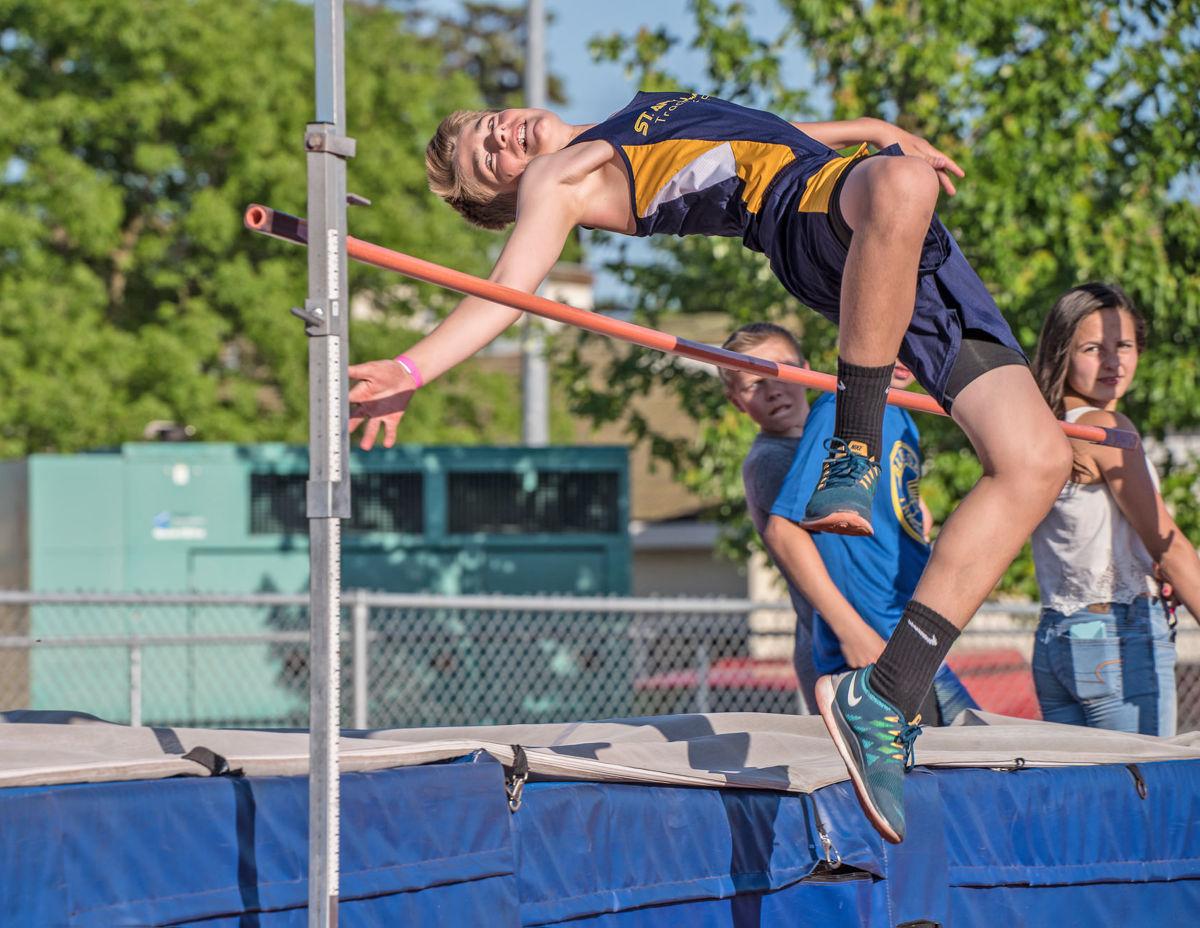 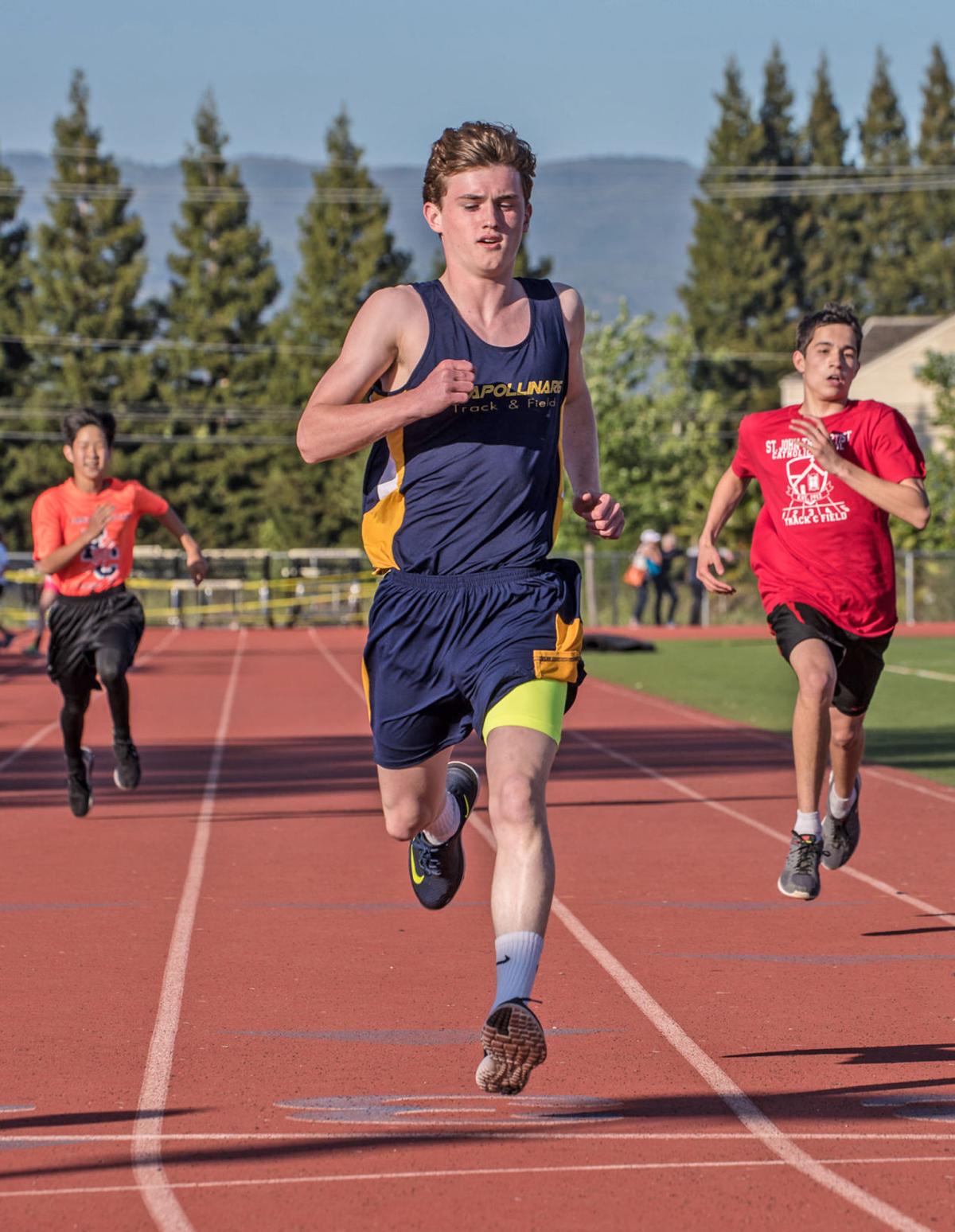 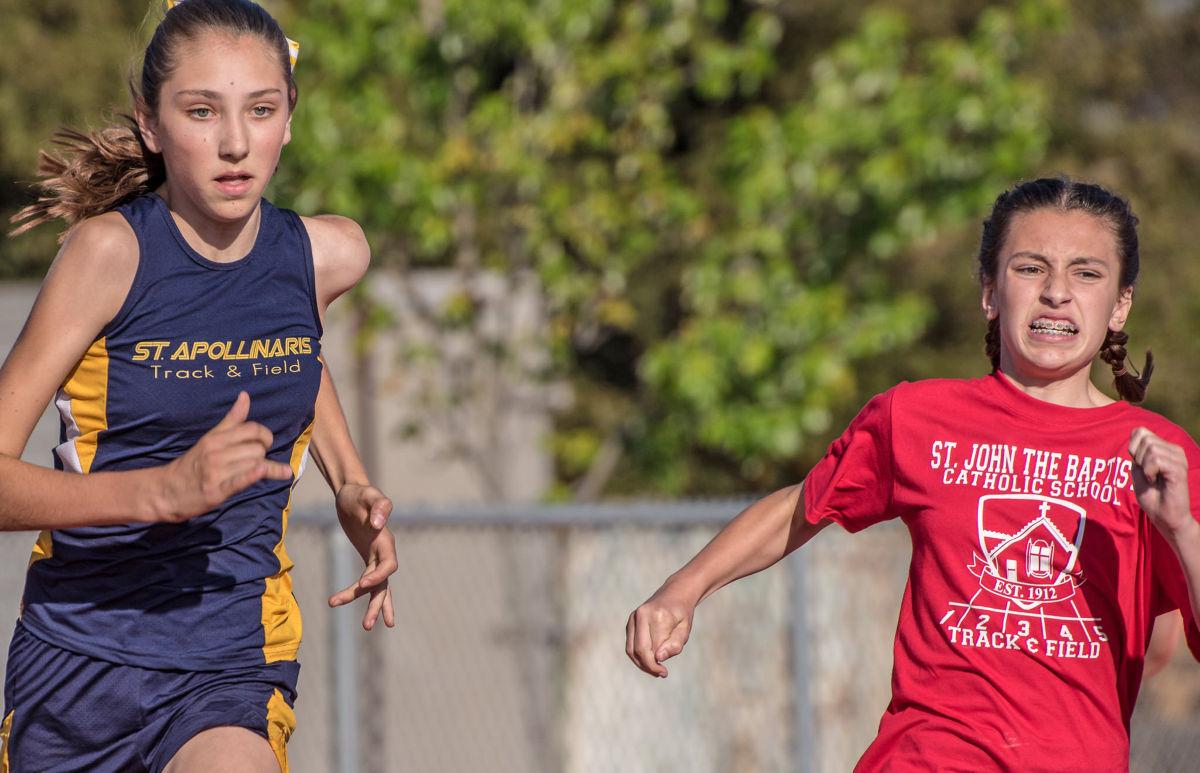 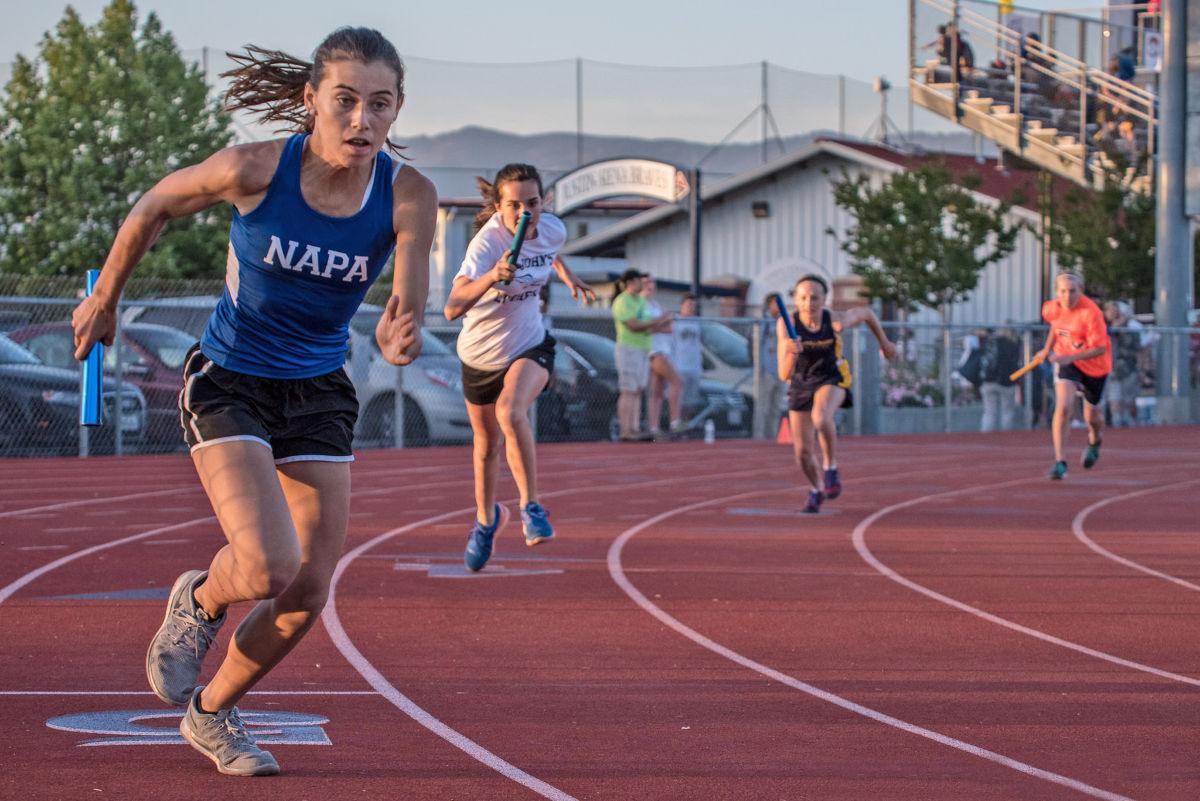 Carly Johnson, left, gets ready to start the eighth-grade girls 4x100-meter relay for the Napa Track Club during the recent St. Apollinaris Twilight Meet at Justin-Siena.

During the sixth annual St. Apollinaris Twilight Track & Field Meet at Justin-Siena, second-grader Ella Brandon of the host school raced to the finish line for a dominant relay victory, then ran straight to the scorer’s table to check her team’s time.

She knew it would take a time of 1 minute, 15 seconds to break the school and meet record, and was thrilled to see her team had accomplished the task.

It was one of the first of many record-breaking performances at the recent event, which also had a record-breaking total number of athletes, 540, in attendance. The meet, run in memory of longtime coach Frank Defillippis, included athletes from St. Apollinaris Catholic, St. John the Baptist Catholic, Blue Oak, First Christian and St. John’s Lutheran schools, as well as athletes from the Napa Track Club. There were timed track and field events for pre -kindergarten athletes through eighth-graders.

“It is great to see the interest in track and field grow in Napa,” said Tracy Martin, a meet organizer. “This sport is known for offering something for everyone, and athletes attend this meet ready to break personal records or very impressive meet records that have been set without racing spikes, starting blocks, or even a great deal of experience in the sport.”

Athletes across the board illustrated how to compete, including some outstanding performances by eighth-graders.

Brendan Geesey of St. A’s had a very successful day, winning the 100 meters in 12.5 seconds and the 400 in a meet-record 1:00. He was also a member of the winning 4x100 relay team, which also included Kevin Galvin, Colby Bates and Max Phipps and turned in a meet-record time of 51.0 seconds.

Not to be outdone, the kindergartners through third-graders ran the 50 and competed in the standing broad jump. First Christian second-grader Samuel Tesfaw had a fast, 8.68-second 50 meters to take first in a meet record. Also in the 50, first-grader Griffin Messenger of St. John’s Lutheran ran a meet-record in 8.84 seconds. Sophie Wassef of St. A’s won the first-grade standing broad jump with a mark of 5-2, a new meet record. St. A’s second-grader Haley Pham won the 50 in a meet-record 8.86 seconds.

Every returning relay team eclipsed last year’s best performance, as did nearly every athlete in one event or another. Blue Oak’s Ava Dominguez illustrated that by taking 18 seconds off her 800 time in the fifth-grade girls division (3:04.49).

The meet finished with the mile relay under the Dodd Stadium lights, where over 10 teams of fourth- through eighth-graders completed their competition with one last lap. Meet records were broken in the fifth-grade boys and sixth-grade girls in the final event.

Caen Healy and Drake Holman will honor one of their fellow 2016 Napa High graduates, Peter Stoppello, by hosting "Peter's Golf Day" on Saturda…

The Vintage High boys soccer program said goodbye to 14 seniors after finishing first in league play for the fifth season in a row.

The SportsVine, a local sports radio talk show that airs from 9 to 10 a.m. Saturdays on KVON 1440 AM, is scheduled to have Denise Horn and her…

Carly Johnson, left, gets ready to start the eighth-grade girls 4x100-meter relay for the Napa Track Club during the recent St. Apollinaris Twilight Meet at Justin-Siena.