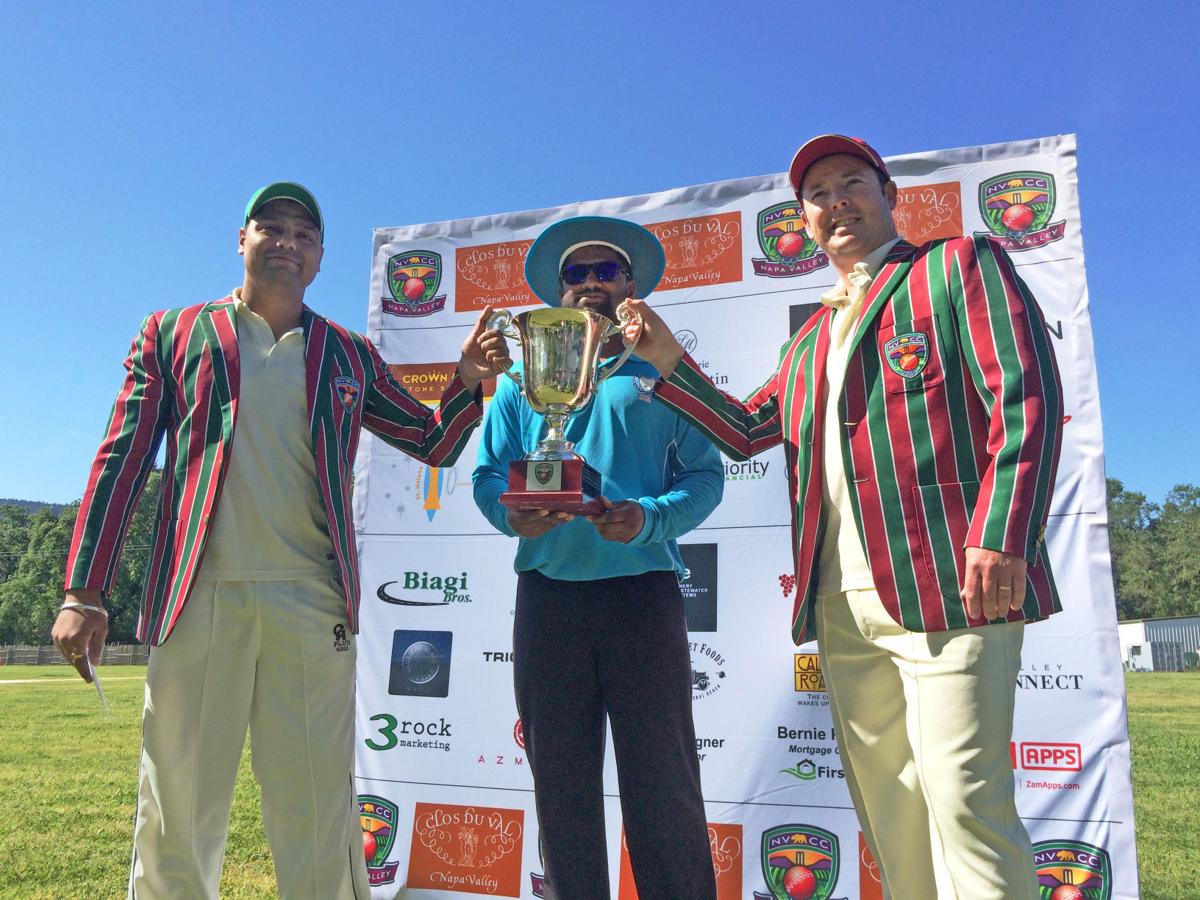 The two captains and umpire pose with the Napa Valley World Series of Cricket trophy during pregame ceremonies Sunday at the Napa County Fairgrounds. They are, from the left, Kiranpreet Singh, Barry Manogaran and Rob Bolch. 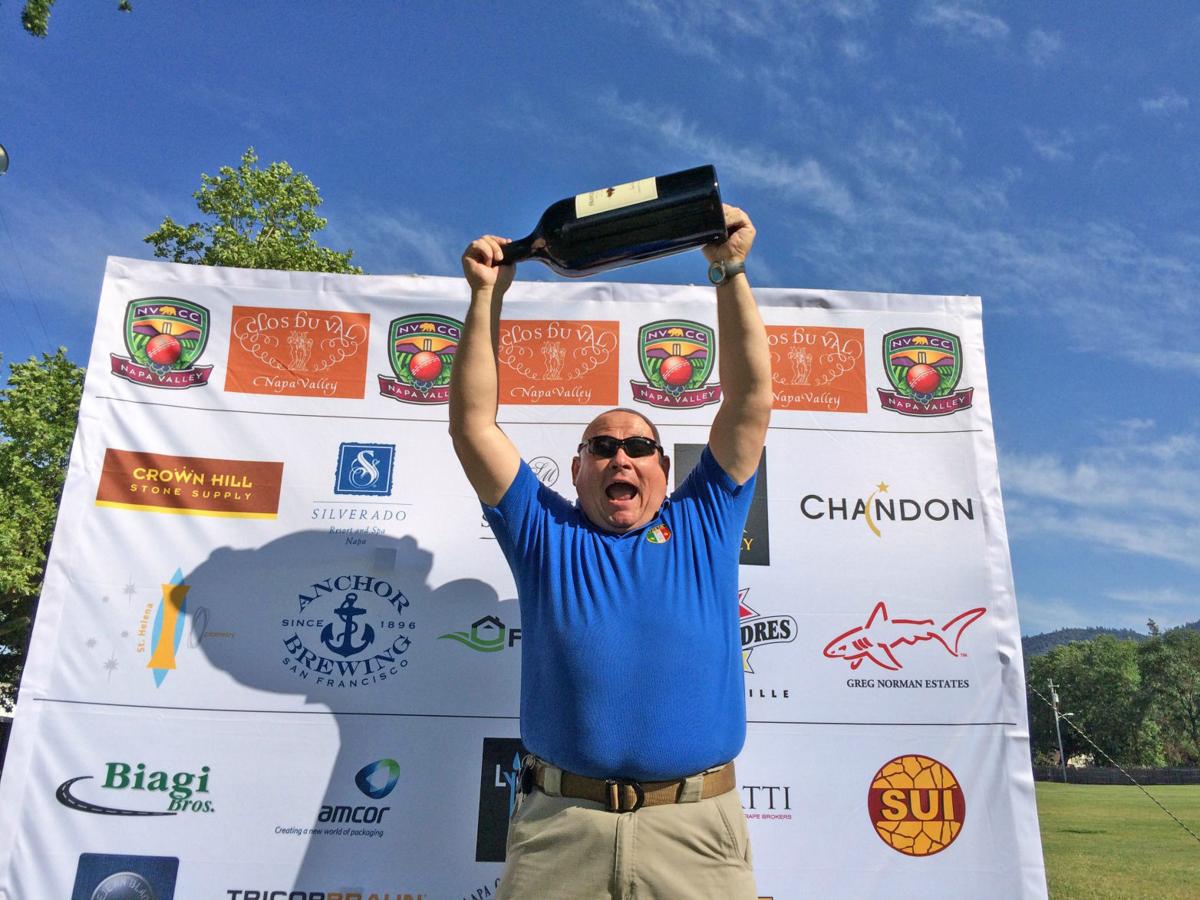 The cricket season in the Napa Valley starts every year with the World Series match, which pits Napa Valley Cricket Club members against each other based on their country of birth.

As the club continues to grow bigger each year there is a lot of pride at stake in this annual game and, having been well beaten in 2015, the Rest of the World team (ROW) was looking to avenge that loss to the Australia/America side (AA). ROW eventually ran out winners by five wickets in a low-scoring game that went back and forth all day and almost ended with a cliffhanger finish.

The coin toss was key in the game due to heavy rain that had fallen less than 48 hours from the start, making the ground soft and the grass lush. Barry Manogaran from Milpitas, a NorCal League umpire, officiated the toss and the game. As trophy holders, AA captain Rob Bolch got to call it, his call of tails was good, and he chose to bat first.

Soon he was possibly regretting his call as his top three in batters — himself, Jared Thatcher and Phil Bourke — were back on the side after only six overs and seven runs on the board.

That early collapse brought Australians John Leake and James Revie together at the crease for the AA team, with the initial task of stemming the flow of wickets. The pair stayed together until the drinks break and beyond, with each playing watchful and measured innings.

ROW captain Kiranpreet Singh had a rich and deep bowling lineup, and he used it well by mixing up his bowlers and never allowing the AA batsmen to get settled. He moved regularly between pace — Moe Maqsood, Bernie Peacock, Martin Mackenzie, Adersh Maqsood — and spin — Amritpal Bhatal, Andrew Healy and himself — and kept the batsmen guessing as to what was coming next.

Mackenzie broke the solid partnership between Revie and Leake, getting Revie to pop up to Maqsood close to the boundary for a solid score of 24 in the 19th over. Not long after, Leake fell to a slower ball from Moe Maqsood that was smartly taken by AA wicker-keeper Bill Nancarrow behind the stumps.

A cameo knock of 17 runs off 32 balls from Tim Kay helped lift the AA team over 100, and a final flurry with the bat from Scott Curwood and Peter Sander got the AA team to a reasonable score of 120 runs.

After lunch from club sponsor Compadres Rio Grille, a short Australia and New Zealand Army Corps Day remembrance service was held at the site of the field to commemorate the anniversary of the first major military action fought by Australian and New Zealand forces during World War I.

With a target of 121 runs to win, it appeared that ROW would chase it down handily. But as is often the way with low targets, they made hard work of it.

ROW opened with Abhijit “Doc” Adhye and Dale Moorhouse, but Moorhouse was soon back on the bench, bowled cleanly by a ripper from Revie. Bijoy Ojha, fresh from a score of 41 in Scottsdale the previous weekend, started watchfully but was eventually dismissed with only two runs from the 21 balls that he faced, caught by Pete Cameron off the bowling of Kay. Bhatal was next up and went big early, with two four’s in his short stint before going for one too many and holing out to Pete Carson at deep square leg.

Another short knock from Moe Maqsood of four runs meant that with 31 on the board and 12 overs in, the ROW was starting to wobble.

Nancarrow came to the middle and, with Adhye, spent 13 overs building a partnership of 54 runs, taking the ROW to within sight of the AA score. Nancarrow scored a solid 31 runs which included five boundaries (four four’s and one six), but eventually fell to the bowling of Leake just as he and Adhye looked like bringing the game home.

With Adhye falling nine balls later, the pendulum swung back in favor of the AA team with two new batters in the middle. New Zealander Martin Mackenzie fell for a quick five runs that brought AA captain Singh to the middle and, with Jeff Keene, the two of them managed to sneak over the winning line with five wickets and three overs to spare.

The traditional Clos du Val “Man of the Match” Award went to Bill Nancarrow of the ROW team for his solid performances with the bat and sharp work behind the stumps as the ROW wicket-keeper.

During the day, the drink breaks in each inning provided an opportunity for spectators and kids to venture to the middle of the field for a demonstration of batting and bowling, part of the clubs’ community efforts. Activities for the children included a jumpy house, potato sack races, three-legged races, relays, soccer, t-ball, an arts and crafts area and, of course, kids cricket.

Commentary and explanations of the game were provided by Dennis DeVilbiss of Radio Calistoga, who was joined by 8-year-old Conor Cleland and visiting Munich-based Englishman Jonathon Deverill.

“Firstly, it was fantastic day, regardless of the result. Everyone puts in so much work to make these days a reality and we want to thank everyone for their hard work in preparation, during the day and at the end packing up,” said Bolch after the match. ”And thanks to the great support from people on the sidelines. When you’re out in the middle, it really helps when you see people cheering and supporting us.

“From a match point of view, ROW were the much better side on the day, and they deserved to win. We knew coming into the match that the team was stacked full of talent — in both the bowling and batting departments. We knew we had to be at our absolute best if we were to take the game to them and be competitive.”

Bourke, NVCC’s president, also added to the sentiment on the strong atmosphere and the work behind the scenes that made it possible.

“It’s been yet another great day for the club as we open our fifth season with another great day of cricket and family fun,” he said. “A lot of people did a lot of work to put the day on today and I want to express my thanks to them. That includes some of our sponsors who contributed products or services on the day – Clos du Val, Domaine Chandon, Anchor Steam Brewery, and Compadres Rio Grille. Without them the day wouldn’t be nearly as successful as it is.”

The two captains and umpire pose with the Napa Valley World Series of Cricket trophy during pregame ceremonies Sunday at the Napa County Fairgrounds. They are, from the left, Kiranpreet Singh, Barry Manogaran and Rob Bolch.