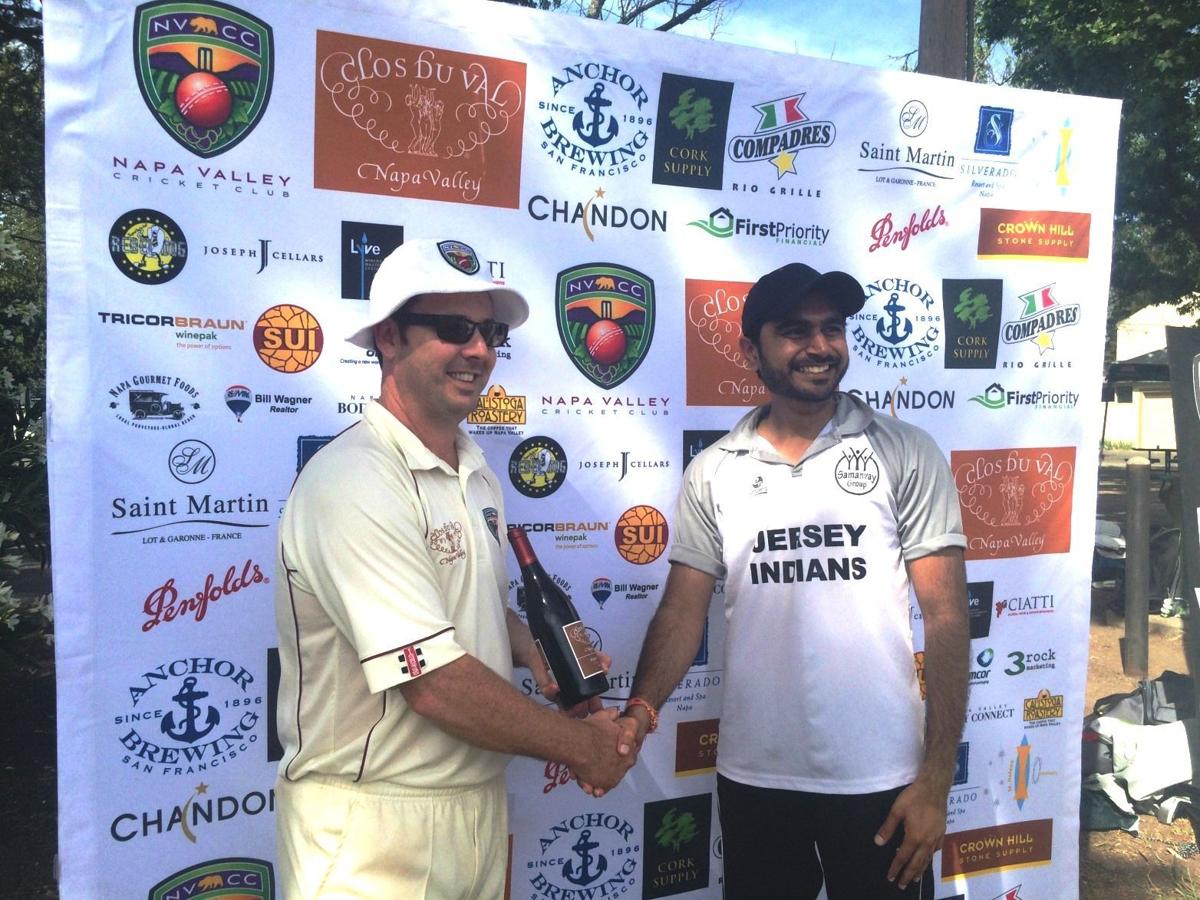 Members of the Napa Valley Cricket Club and Sonoma Gullies pose after their first competition of the season May 30 at the Napa County Fairgrounds in Calistoga.

The Sonoma Gullies put on an impressive display of “total cricket” as they defeated the Napa Valley Cricket Club in convincing fashion May 30 at the Napa County Fairgrounds in Calistoga.

There were highlights for NVCC, but it was out-gunned in all three departments – batting, bowling and fielding – as the Gullies took advantage of some questionable decisions that went their way.

Napa Valley captain Rob Bolch won the toss and decided to try to take advantage of the cloudy conditions overhead by putting Sonoma into bat. The decision paid early dividends with two early wickets for the New Zealand pair of Martin Mackenzie and Bernie Peacock, with only 15 runs on the board for the Gullies.

The tables turned with the arrival of the Gullies’ No. 4 batsman, Sushil Kumar, to the crease. A formidable batsmen and well known to the NVCC attack, Kumar (53) was the anchor in a third wicket partnership with Ishan Patel (35) that totaled 85 runs. The NVCC had a chance to get Kumar second ball when a tough chance to catch him off a slight edge was almost taken by NVCC wicket-keeper Phil Bourke.

Napa Valley was lively in the field with some strong ground fielding on display from Bill Nancarrow, Clive Richardson and Dave Aquilina. But it was not enough to thwart the Gullies’ batsmen, who scored 184 of their 253 runs with boundaries (19 fours and 18 sixes). The Gullies batted all the way down their order and, despite NVCC taking wickets at regular intervals, eight of the Sonoma batsmen scored runs in double figures – five of them scoring in excess of 20.

The pick of the bowlers for NVCC was Kiranpreet Singh, whose six overs gave up only 17 runs and included the prize wicket of Kumar, who made his 53 runs off only 26 balls that included seven 6’s. Napa Valley showed its bowling depth with six of the seven bowlers used, each notching up wickets with two apiece for Singh, Mackenzie, Bolch, Bijoy Ojha and Andrew Healy.

After the lunch break, NVCC set off to chase what would have been the biggest chase in the club’s history, needing 254 runs to win in their allotted 35 overs. Even more intriguing was the fact that games between the two teams are traditionally low-scoring affairs, so a successful NVCC chase would have seen records tumbling. The Gullies’ tradition of tight and consistent bowling continued and was to frustrate many of the NVCC batsmen and ultimately lead to wickets.

Napa Valley never really got going with the bat and top scores of 20 from Mackenzie and 11 from Healy were as good as it got with the bat on a frustrating day at the crease for the hosts. The 19th over was the nail in the coffin for NVCC with two run-outs and a wicket for Nadeem Solanki in five balls. The pressure of the line and length bowling from the Gullies told as NVCC looked to run where there weren’t runs to be had and some fine ground fielding from the Gullies with two direct hits. The hosts were looking to put some semblance of respectability on the scoreboard with a reply in three figures, but fell just short of this ending up with 95 runs on the board in the 29th over.

“We were beaten by a much better team today that was strong in all three disciplines,” Bolch said. “Saying that, I thought we played well ourselves and, despite taking regular wickets, we just couldn’t keep the boundary count down. We had a couple of close calls go against us that could have made a difference, and had more chances been caught it could have been a completely different game, but that’s cricket. On the batting front, we were always up against it with such a big total to chase, and the strong bowling and fielding from the Gullies made sure we never really got going properly on that front.”

Bolch presented the traditional Clos du Val “Man of the Match” Award to Ishan Patel of the Gullies for his all-around performance on the day. Fittingly Bolch presented Patel with a bottle of Pinot Noir from the Carneros region that traverses the Napa-Sonoma county line.

Napa Valley will host the Sri Lanka Socials at 10:30 a.m. Saturday at the fairgrounds.

Members of the Napa Valley Cricket Club and Sonoma Gullies pose after their first competition of the season May 30 at the Napa County Fairgrounds in Calistoga.