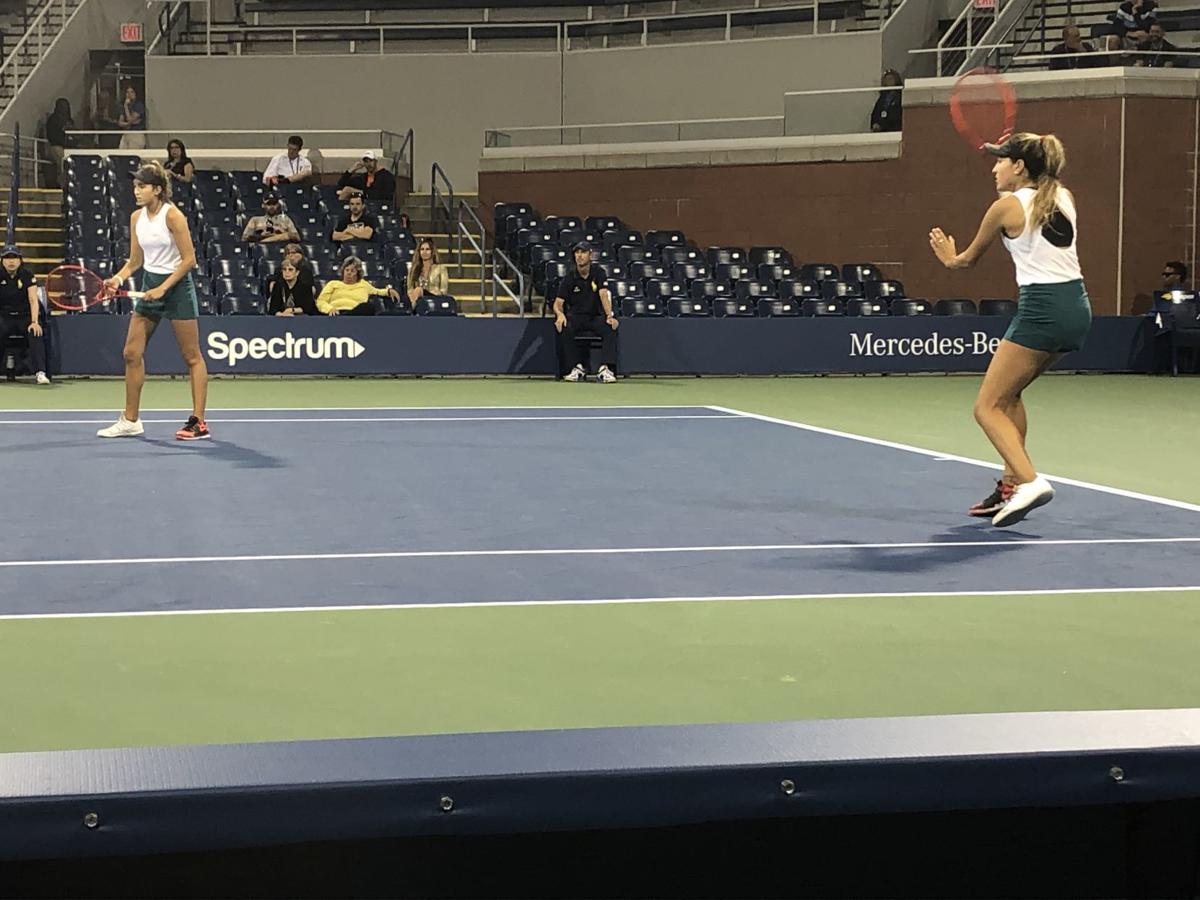 Twins Alurra (left) and Mirabella (right) Zamarripa play in their first-round doubles match at the U.S. Open on Monday, on Court 17 of the Billie Jean King National Tennis Center in Flushing Meadows, New York. The twins lost in a third-set tiebreaker 7-5, 5-7 (10-2), but thoroughly enjoyed the experience of playing in their first Open tournament. 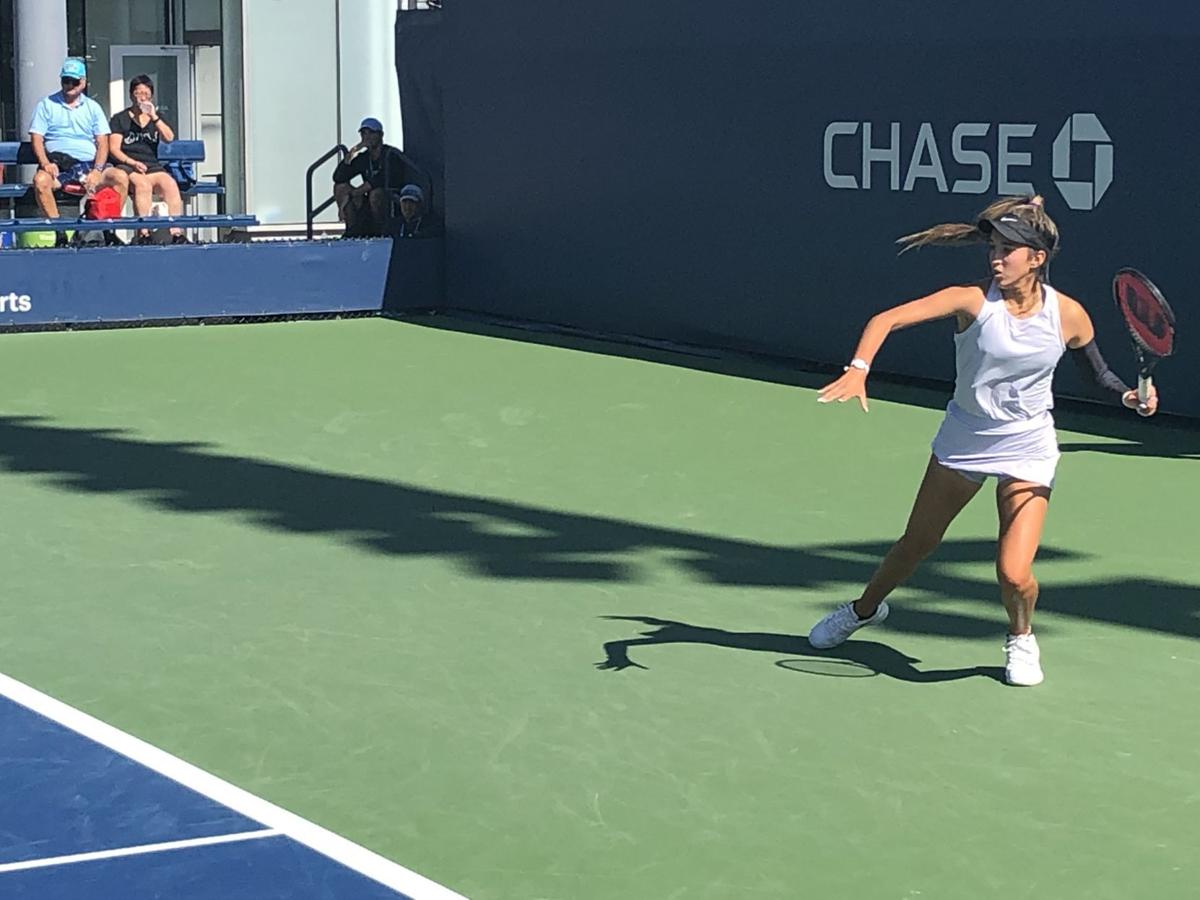 Alurra Zamparripa plays in her singles match at the Junior U.S. Open on Monday, on Court 6 of the Billie Jean King National Tennis Center in Flushing Meadows, New York. She won her first-round singles match 6-0, 6-2 but fell 6-0, 6-2 in the second round.

FLUSHING MEADOWS, New York — Tennis fashion has taken many strange twists and turns over the history of the sport, but it’s pretty safe to say that St. Helena twins Allura and Maribella Zamarripa may have done something unprecedented with their sartorial choice Tuesday.

Playing in a first-round doubles match in the junior girls event at the U.S. Open, 17-year-olds Allura and Maribella each took the court Tuesday night wearing two different colored sneakers.

Allura wore a black Nike tennis shoe on her left foot, and a white one on her right foot. Maribella, the younger sister by five minutes, did the opposite.

It made for a stunning visual effect, even if it didn’t help lead to victory. After getting a wild card from the United States Tennis Association into the draw, the Zamarripas lost their opening match at the Billie Jean King National Tennis Center, 7-5, 5-7, (10-2) to Joanna Garland of Taipei and Mananchaya Sawangkaew of Thailand.

“It was just something our dad had been asking us to do for fun and to be different, and we just started doing it at a few of our last tournaments,” Allura said. “Everybody loved it the first time we did it, so we figured why not do it for the Open?”

Allura, who reached the second round in the singles draw before losing earlier on Tuesday, may have suffered more than just a defeat. Early in the doubles match she said she “stepped wrong” with her right foot and injured her Achilles, and she was in significant pain during and after the match.

On Wednesday their father, Dave Zamarripa, said Allura woke up in a lot of pain and was going to have further tests on the Achilles.

“It just felt like it got lit on fire,” Allura said. “I couldn’t really serve and had a lot of trouble pushing off. It’s disappointing, but we had such a great experience here.

“I feel like if we played five percent better, we’d have won.”

Despite losing their first match, the girls said they were thrilled to get to experience New York, and a Grand Slam tournament, for the first time. After traveling the globe and playing mostly lower-level professional tournaments the past year, Alurra and Maribella weren’t sure they’d be invited to play here. They’ve mostly bypassed the USTA junior circuit so they didn’t accrue juniors ranking points that would qualify them to play at the U.S. Open.

But their results in the past 12 months have been outstanding; the twins have won three International Tennis Federation (ITF) $15,000 events, in Wesley Chapel, Fla., Orlando, Fla. and Bogota, Colombia, and the USTA noticed.

“They’ve really taken a step forward and they’ve gained so much confidence at these pro events, and confidence is so huge,” said Dave Zamarripa, their primary coach and a teaching pro in St. Helena. “Culturally and tennis-wise, all the travel has been great.”

Dave, who said he takes turns with wife Mitzi in shepherding the kids to tournaments, said the twin chemistry the girls have has always been there, but their tennis game is now being helped as well.

“Alurra has moved ahead a tiny bit in singles, because she’s a lefty and that’s a bit of an advantage in tennis,” he said. “But in doubles they’re really getting stronger.”

Born in Hawaii but moving to St. Helena when they were young, Alurra and Maribella took to tennis immediately, and led by Dave and now assisted by Berkeley-based coach Rosie Bareis, they rapidly became good players.

They’re currently going to an online high school, enabling them to focus on tennis more, and their success has attracted a lot of attention from colleges.

UCLA, Pepperdine, Stanford, USC, Duke and Princeton have all been in contact with the twins.

But whether they’ll go to college or turn pro right away has been the subject of some sisterly conflict.

“Allura has always wanted to go pro right away but the problem is,” Mirabella said, staring at her sister intently, “if she does and gets injured she has nothing to fall back on. It just doesn’t really make sense, because if something happens and you’re not successful, you need a backup plan. Which is why we’re going to go to college first. Right, Alurra?”

Mirabella’s twin rolls her eyes and then smiles.

“Yes, I’m conceding, fine, we’ll go to college for a year or two, then see what happens,” Alurra said with a sigh.

If they go to Stanford, they’d be following in the footsteps of the most famous twin doubles team in tennis history: The Bryan brothers, Mike and Bob. Like the Zamarripa girls, one is a lefty while the other is a righty, and they’re also from California. The Bryans have won 16 Grand Slam titles.

“We’ve met them a few times and of course they’re our idols,” Maribella said. “We didn’t have a full-on conversation with them, but they were really nice.”

Maribella said that the New York City experience has been “amazing” and that the girls got to do some sightseeing, in Central Park and at the Empire State Building.

And being around a Grand Slam tournament has also been eye-opening.

“This was such a great opportunity for us, and just so much fun,” Mirabella said. “I would love to play more Slams.”

And if they do, you can bet they’ll be wearing two different-colored shoes, too.

Aaron Shortridge may get a chance to play baseball in 2020 after all. The Vintage grad was among those named to the Pittsburgh Pirates 60-man player pool for the upcoming 2020 MLB season on Sunday.

In his latest County Football Inside, former Register Sports Editor Marty James catches up with Vintage grad Andrew Shipp, who recently took a job with the Las Vegas Raiders.

NEW YORK — Call it a true Hollywood story for first-round pick Pete Crow-Armstrong. And no act at all, in fact.

Exactly one month since George Floyd's death at the hands of  Minneapolis police officer, student Jaden McNeil tweeted, “Congratulations to George Floyd on being drug free for an entire month!” prompting outrage from K-State football players.

Girls Golf: American Canyon's Robinson wins on each side of the country

NEW YORK — Something still bothers Barry Larkin about his Most Valuable Player award.

Twins Alurra (left) and Mirabella (right) Zamarripa play in their first-round doubles match at the U.S. Open on Monday, on Court 17 of the Billie Jean King National Tennis Center in Flushing Meadows, New York. The twins lost in a third-set tiebreaker 7-5, 5-7 (10-2), but thoroughly enjoyed the experience of playing in their first Open tournament.

Alurra Zamparripa plays in her singles match at the Junior U.S. Open on Monday, on Court 6 of the Billie Jean King National Tennis Center in Flushing Meadows, New York. She won her first-round singles match 6-0, 6-2 but fell 6-0, 6-2 in the second round.