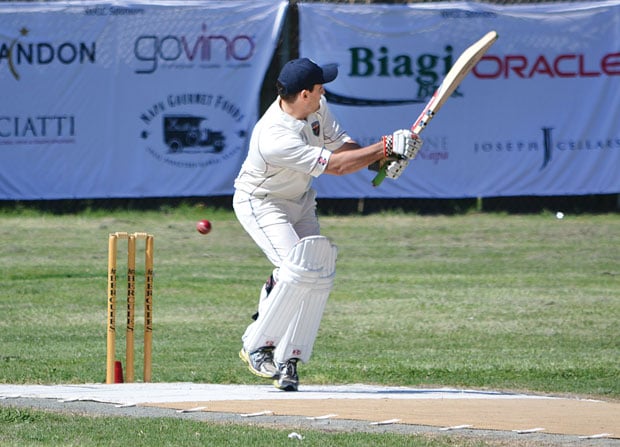 Tim Irwin of the Australia/America team plays a shot off his legs on his way to an inning of 53 runs off 39 balls against Rest of the World during the Napa Valley Cricket Club’s season-opening World Series game Saturday. Gary Howes photo 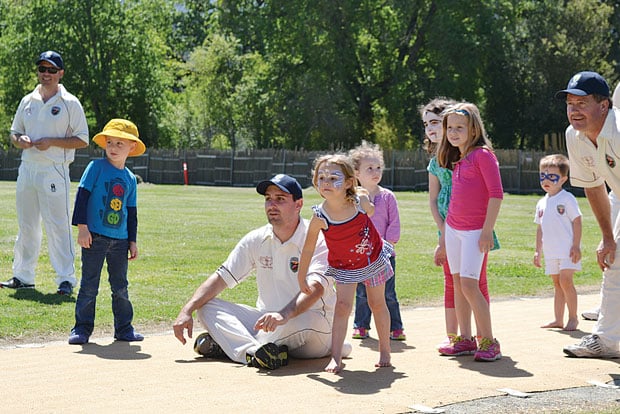 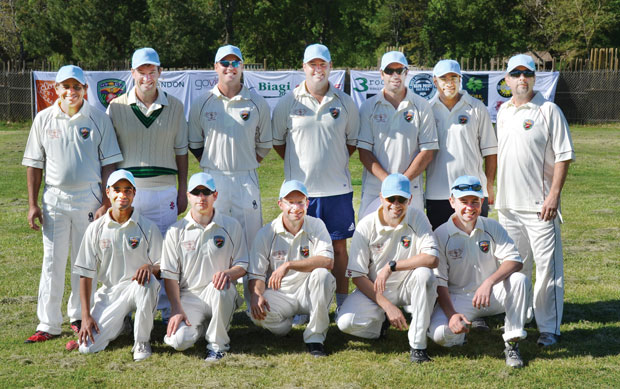 The Napa Valley Cricket Club held its third annual season-opening “World Series of Cricket” game, which pits club members against each other based on their native countries, and Rest of the World overcame Australia/America for the first time on Saturday at the Napa County Fairgrounds in Calistoga.

The game saw the introduction of a number of new members recruited over the winter months in addition to the retirement of club stalwart Matt Wood, an English born off-spinner and Estate Manager at Chandon, one of the NVCC’s sponsors.

After recent heavy rains, NVCC was blessed with eight days of sunshine and the hard work of head groundsman Pete Carson and his team. They turned out a hard and consistent pitch and a dry outfield, which contributed to a great day of entertainment for the 150 or so spectators on hand.

The all-important toss was won by Rest of the World captain Bill Nancarrow. The New Zealander’s decision to take the ball first was vindicated with a slow start from Australia/America openers Phil Bourke and Bruce Ruddich, and wickets in the fifth and seventh overs that keep the runs down. Unlike in previous years, Rest of the World took the early catches that came its way, with Tim Ford losing his wicket to a fine catch by Englishman Colin Nolan at backward square leg off the bowling of Martin Mackenzie. Australian Tom Donegan fell to an excellent run-out by South African-born Dale Moorehouse and Mackenzie. With both of these wickets in consecutive balls, Australia/America was reeling at 44 for 4 after 10 overs.

The arrival of Tim Irwin to the middle began a revival of sorts for Australia/America, as he built watchful innings of 53 of 39 balls that included 9 boundaries (5x4, 4x6). Irwin stuck around as Rest of the World knocked off his batting partners one by one and eventually fell to another fine catch, this time by Mackenzie at deep mid-wicket off the bowling of Irishman Andrew Healy as he went for one boundary too many. Australia/America eventually ran out of batsmen and was all out for 123 in 27 of its 30 overs. Pick of the Rest of the World bowlers was New Zealander Bernie Peacock, with 3 wickets for 17 runs off his allotted 5 overs.

A well-deserved lunch break for both teams was provided by the Rebel Dog Hot Hog Cart as Rest of the World plotted its strategy to chase down a very get-able target of 124. As is often the way in cricket, such an attainable target is often not a good thing, and the club has a history of falling painfully short in previous encounters.

The break provided an opportunity for spectators and kids to venture to the middle of the field for some demonstrations in batting and bowling, part of the club’s community outreach efforts. In addition to this, the club secured the services of Napa Valley personal trainer Stephanie Barone, who led the Children’s Activity Area for the day. Shephanie was assisted by St. Helena and Calistoga Boys and Girls Club staff volunteers Maira Nava-Alvarez and Roy Calderon. The three kept the children’s entertainment flowing and fun in an action-packed day, with a range of activities that included a jumpy house, potato sack races, three-legged races, relays, soccer, T-ball, fabulous face paintings, and an arts and crafts area.

Rest of the World opened the chase with New Zealander Jeff Keene and Moorehouse, who both frustrated opening Australia/America bowlers Irwin and Donegan. Morehouse eventually fell to a leg before wicket decision that went Donegan’s way and, despite scoring only one run, had used up a lot of the opening bowlers allocation of overs. That would prove pivotal as the innings progressed. Out to middle strode Abhijit “Doc” Adhye, who played his finest innings ever in NVCC colors. Adhye’s 44 runs off 63 balls, including a four and a six, saw him play every shot cleanly and he was rarely troubled by the Australia/America bowlers.

Adhye was accompanied by Keene for almost 15 overs as they built a fine second wicket partnership, to which Keene contributed 33 runs off 56 balls. Irwin was eventually brought back into the AA attack and bowled Keene middle stump, but by then it was too little, too late. With young Amritpal “AP” Bhatal next in the Rest of the World batting lineup, the game was all but over. Bhatal’s quick-fire 20 off 14, including a four and two 6s, saw the game home for his team with 8 wickets to spare and 5.3 overs left.

The traditional Clos du Val “Man of the Match” Awards went to Australia/America’s Tim Irwin of and Rest of the World’s Adhye for their great performances with the bat.

“What a game!” Rest of the World captain Nancarrow said. “The guys did a great job of containing the AA team in the early stages and taking our early chances, and catches, really made the difference today. Credit to “Doc” for this fine show with the bat which helped to bring the World Series trophy our way for the first time in three years.”

“It’s been a great day for the club as we open our third season with another great day of cricket and family fun,” said NVCC president Bourke, who also captained Australia/America. “The AA team were found wanting this year, particularly in the field, and if we’d taken more of our opportunities I think it would have been a closer game. That being said, I know that everyone enjoyed the day and we look forward to another year of cricket here at the fairgrounds in Calistoga.”

The club will next host the Sonoma Gullies May 3, starting at 10:30 a.m. Visit http://napacricket.com for more information.

Tim Irwin of the Australia/America team plays a shot off his legs on his way to an inning of 53 runs off 39 balls against Rest of the World during the Napa Valley Cricket Club’s season-opening World Series game Saturday. Gary Howes photo