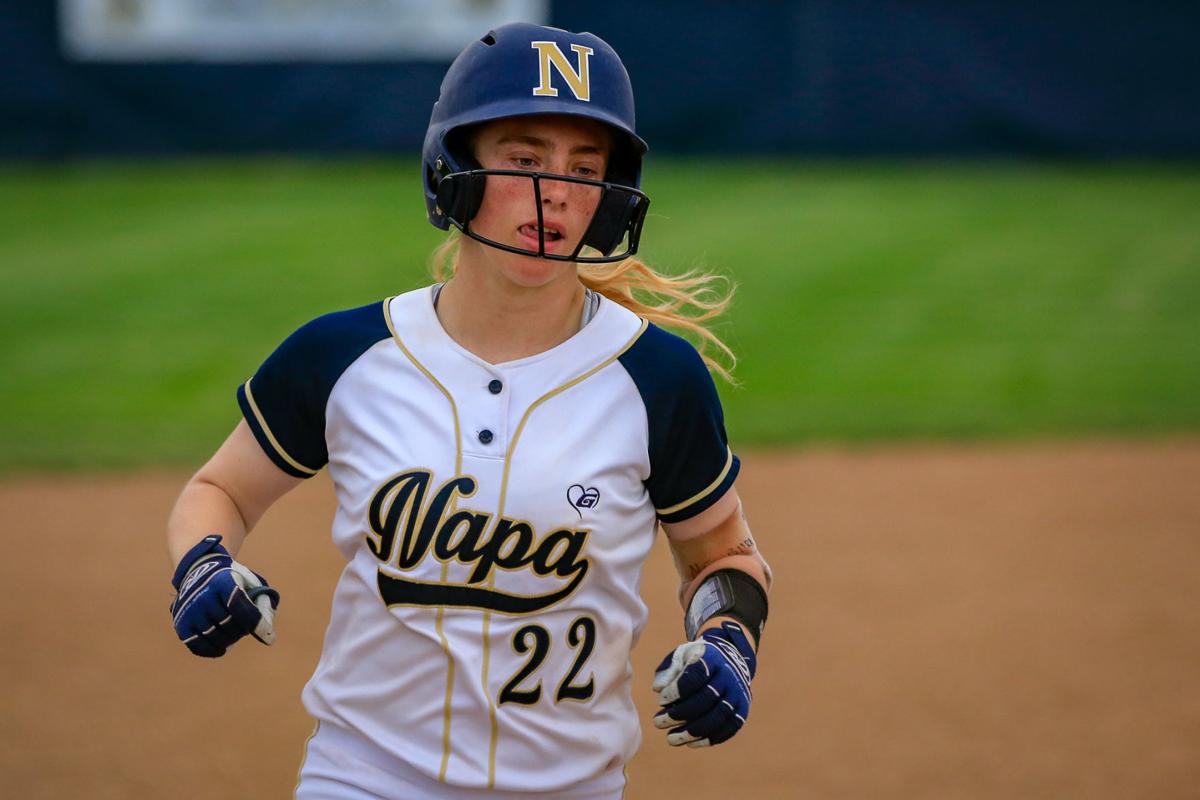 Napa High's Caity Newburn rounds the bases after hitting a three-run homer in a 23-13 playoff-opening win over visiting Clayton Valley Charter on May 14. 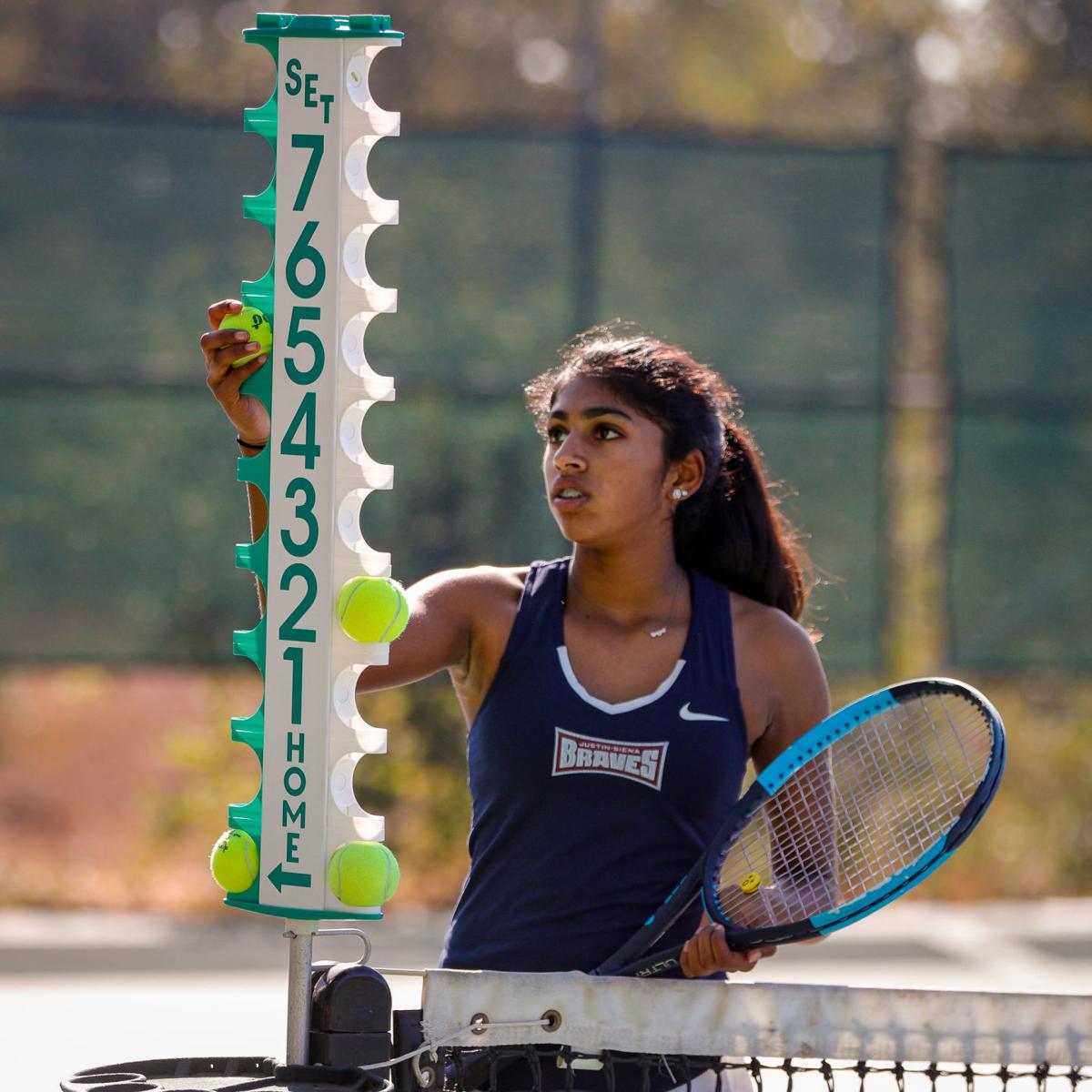 Justin-Siena's Priyanka Shanker adjusts the scoring post after taking a 5-2 lead in the first set of the VVAL singles final on Nov. 7 at the Napa Valley Tennis Association courts behind Vintage High. 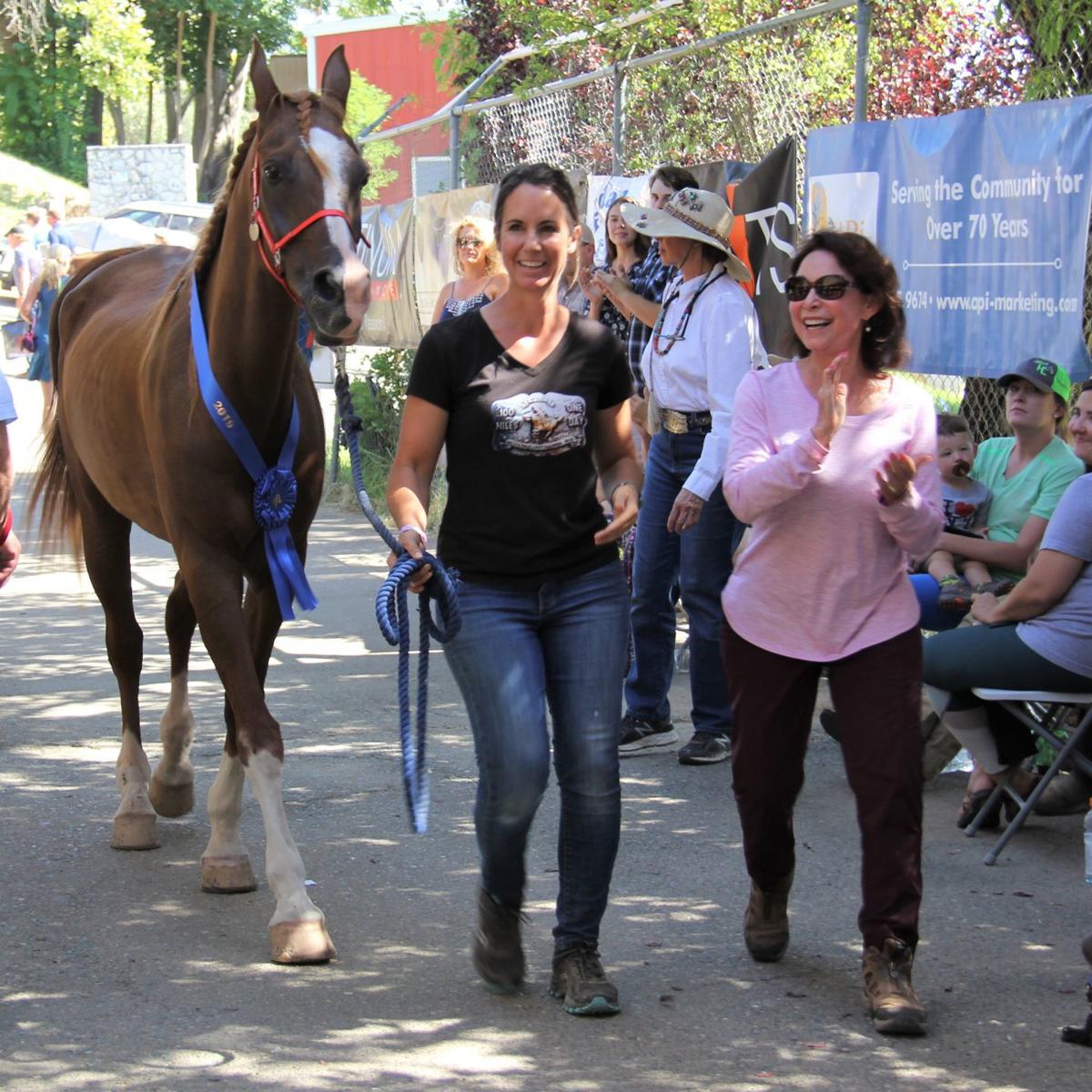 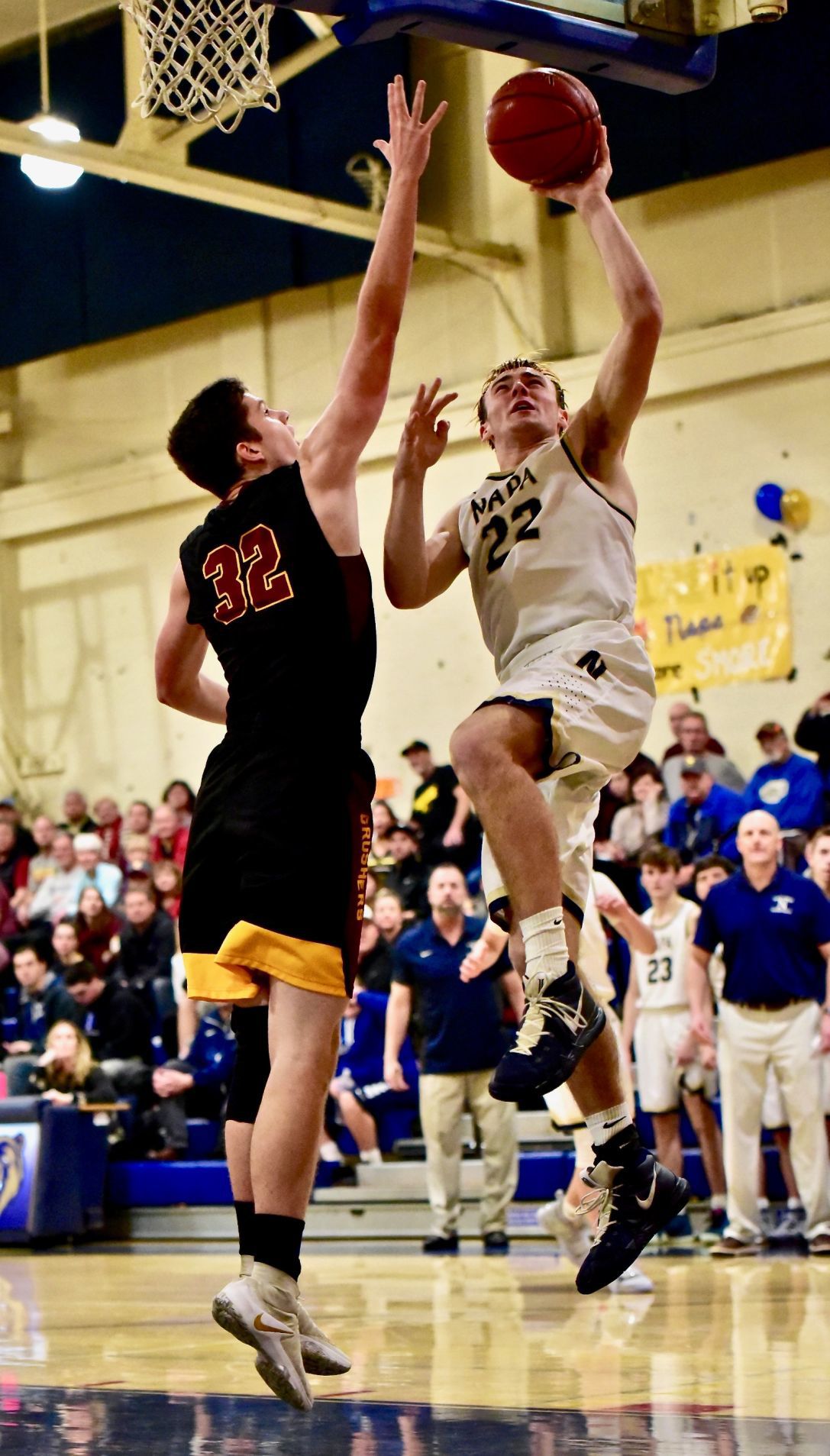 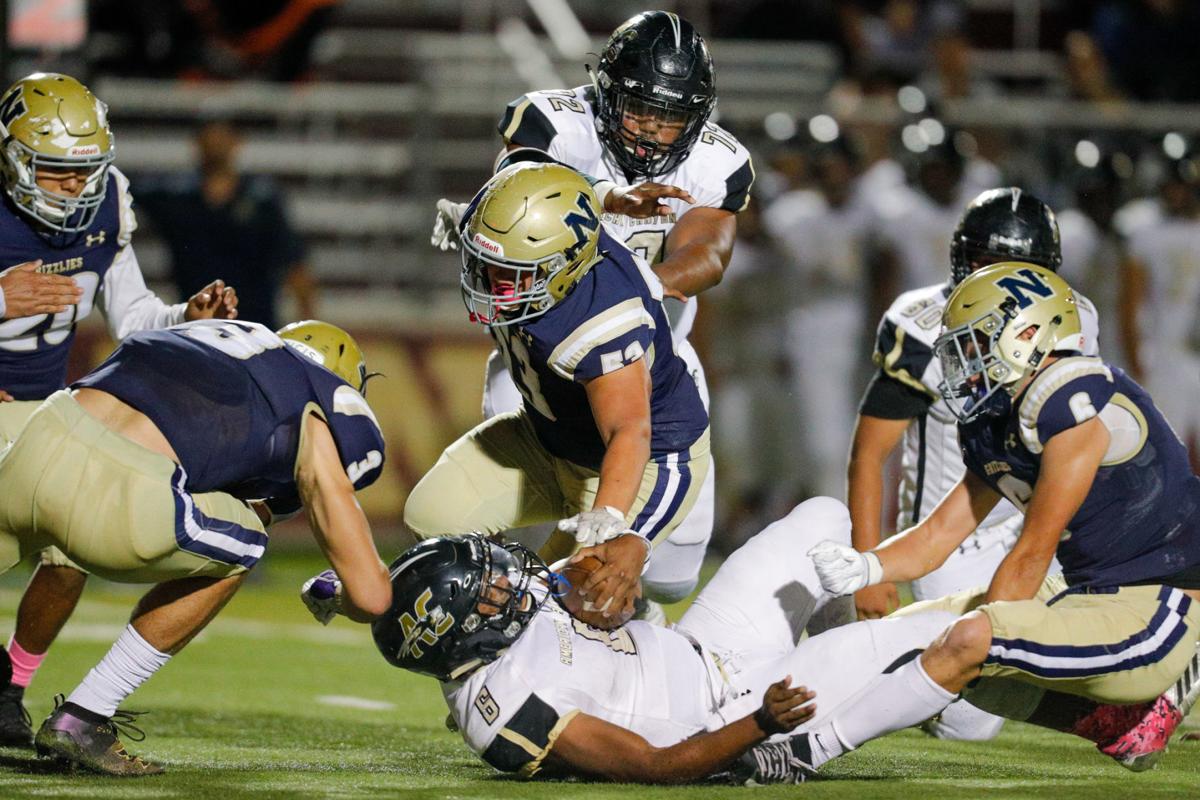 American Canyon Wolves quarterback Vance Eschenburg (6) is brought down by Napa High's Brock Bowers (3), Jesse Desa (53) and Issac Rojas (6) after running for a first down on Oct. 4 at Memorial Stadium.

Napa High's Caity Newburn rounds the bases after hitting a three-run homer in a 23-13 playoff-opening win over visiting Clayton Valley Charter on May 14.

Justin-Siena's Priyanka Shanker adjusts the scoring post after taking a 5-2 lead in the first set of the VVAL singles final on Nov. 7 at the Napa Valley Tennis Association courts behind Vintage High.

American Canyon Wolves quarterback Vance Eschenburg (6) is brought down by Napa High's Brock Bowers (3), Jesse Desa (53) and Issac Rojas (6) after running for a first down on Oct. 4 at Memorial Stadium.

Here are the Napa Valley Register’s Top 10 sports stories from 2019, as selected by the sports staff:

The Vintage High boys soccer and girls basketball teams didn’t let the thrill of leaving the Monticello Empire League on top go to their heads. After winning MEL titles in 2017-18, they entered the new Vine Valley Athletic League – where five of their six opponents were new league foes – and finished first again in 2018-19. The Crushers actually won their third straight boys soccer league title, going 11-0-1 and extending their league unbeaten streak to 20 games.

The Napa High boys basketball team not only won its first league title since 1991, but went 12-0 in the new VVAL. Head coach Zack Cook’s Grizzlies also won the league tournament and earned their first section playoff berth since 2005. Seeded just No. 14 in the North Coast Section Division I playoffs despite a 23-5 record, they had to travel to Union City for their NCS playoff opener and fell to No. 3 seed James Logan, 85-76.

Napa High softball star Caity Newburn became the first freshman to be named Napa County Player of the Year for a sport since Justin-Siena basketball phenomenon Vicky Deely in 2004-05.

Newburn led Napa to its first league title in seven years, as the Grizzlies finished 9-3 in the new VVAL and 15-8 overall. Seeded No. 8 in the NCS Division I playoffs, they knocked off No. 9 Clayton Valley Charter before falling 11-1 to No. 1 Foothill, the eventual champion.

It was her fifth consecutive top 10 finish aboard Monk, a 17-year-old Arabian. It also meant a sixth round of Haggin Cup testing and judging for the 2000 Vintage High graduate, who placed fourth last year, second in 2017, fifth in 2016 and eighth in 2015 aboard Monk and seventh in 2006 on Phoenix Affair.

The Haggin Cup goes to the horse deemed to be in the best condition of the top 10 finishers and Fisher finally won it riding Monk, which is owned by Chris Martin of Penn Valley. Fisher and Monk also had their names added to the Wendell Robie Cup, which goes to a horse that finishes five times.

The third time was the charm for Dr. John Diana at the 42nd annual 100-mile Western States Endurance Run from Squaw Valley to Auburn.

Four years after earning a bronze buckle for the second year in a row for finishing the prestigious ultramarathon between 24 and 30 hours, the Napa orthopedic surgeon came home with the coveted silver buckle that goes to runners who finish in less than a day. Diana placed 91st out of 319 finishers in 23 hours, 13 minutes and 13 seconds.

He got it done two weeks after his 50th birthday, despite sustaining a cracked rib when he’d tripped and fallen on a rock during a training run a month before. Since his previous WS100, Diana’s father had passed away and his family had lost its Silverado highlands home in the October 2017 wildfires.

Napa County was represented at the CIF State Cross Country Championships by three schools, the most since 2011.

St. Helena junior Harper McClain, who in the spring had placed seventh in the girls 3,200 meters at the state meet, added to her legacy at the cross country state meet this fall by winning the Division 5 girls race in 17:13.4 at Woodward Park in Fresno, topping a field of 198 runners. Saints senior Jordan Reilly placed 58th out of 202 runners in the Division 5 boys race in 17:02.8.

History was also made on the gridiron this fall, courtesy of St. Helena High running back Ivan Robledo. In his first full season on varsity, the 5-foot-11, 210-pound sophomore ran for 2,216 yards with 33 touchdowns, both single-season school records. The former rushing touchdown record was 29 set by Charles Bertoli in 2011, and the former rushing yards record was 1,717 set in 2013 by Sebastian Segura.

With only 16 varsity games under his belt, Robledo has 2,691 career rushing yards and 39 rushing touchdowns.

The Braves finished 12-0 in the Vine Valley Athletic League for the second year in a row, before having their 27-match win streak snapped with a 5-2 loss to Head-Royce in their NCS playoff opener. Shanker kept the VVAL singles crown in the family, however, after sister Parvathi won it in 2018.

They aren’t the valley’s only sensational sister act in the sport. Maribella and Allura Zamarripa, St. Helena’s home-schooled tennis twins, were selected as a wild card draw for U.S. Junior Open in Flushing Meadows, New York. Allura made it to the second round in singles before being ousted and joining her sister in doubles, where they fell in the first round but gained valuable experience.

For the first time in Napa Valley history, every football team qualified for the section playoffs. Four of the six – Vintage, Justin-Siena, St. Helena and Calistoga – won their first-round games. Napa, back for the first time since 2016, felt better about its playoff loss to Clayton Valley Charter after the Ugly Eagles went on to win the Division 2-AA state title. Vintage lost 28-21 in the section semifinals to Campolindo, which fell 27-7 to Clayton Valley Charter in the section title game.

While making household names of countless athletes as a sports editor, columnist and sports writer for the Napa Valley Register since 1979, Marty James became one himself. James, who covered three Sac-Joaquin Section-champion football teams and followed many athletes from Little League or junior golf into their long professional careers, retired on June 4 – the 40th anniversary of his hiring. The graduate of San Ramon Valley High and Sacramento State now writes for the Register as a freelancer and handles sports information for Napa Valley College.

A look at the top sports stories in the Napa Valley in 2018:

Join now & SAVE on your first 3 months!