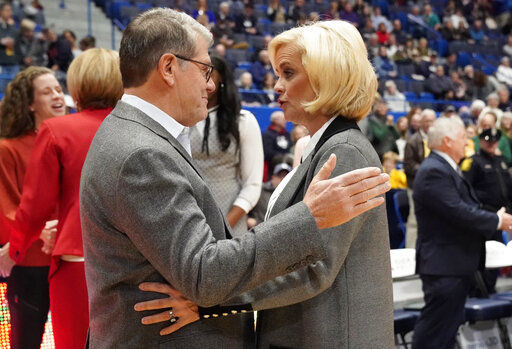 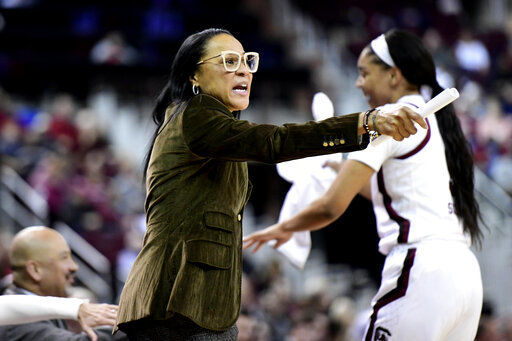 South Carolina coach Dawn Staley, left, communicates with players during the first half of an NCAA college basketball game against Arkansas, Thursday, Jan. 9, in Columbia, S.C.

South Carolina coach Dawn Staley, left, communicates with players during the first half of an NCAA college basketball game against Arkansas, Thursday, Jan. 9, in Columbia, S.C.

NEW YORK — South Carolina moved up three spots to No. 1 in The Associated Press women's college basketball poll after the top three teams from the previous week all lost.

It was a rough week for ranked teams, with 11 of them losing at least one game, including Nos. 1-3 falling in a four-day span. The last time the top three teams in the AP Top 25 lost within a span of seven days was during the 2011 NCAA Tournament.

It wasn't just the top teams that lost. Eight of the Top 25 programs were beaten by unranked teams, showing more parity in the sport than before. Only two teams — No. 9 North Carolina State and No. 16 Gonzaga — stayed in the same place.

Baylor jumped up four spots to No. 2 on Monday after beating then-No. 1 UConn. The Lady Bears, who received seven first-place votes from the 30-member national media panel, were followed by Stanford, UConn and Louisville. Oregon, UCLA, Oregon State, N.C. State and Mississippi State rounded out the top 10.

“Our ‘Women Up' theme this season is about approaching each practice and game with a focused, disciplined and trusting mindset. Our players have embraced this process and their commitment to hard work has earned them the No. 1 ranking in the country," coach Dawn Staley said.

The Gamecocks are the fourth different team to hold the top spot in the poll this season. It's only the third time since the AP Top 25 became a writer's poll in the 1994-95 season that there have been four different No. 1 teams in the same year. The other two times occurred in 2003-04 and 2004-05.

There has never been five different No. 1 teams in the same year since it became a writer’s poll.

There is no clear-cut favorite now to win the national championship. A handful of teams look like they could win the NCAA title in New Orleans.

“I don’t think there is one team that is head and shoulders above anybody. There are about six teams that have the ability the talent and the coaching to win it all," Baylor coach Kim Mulkey said. “Don’t ask me who those six are, but I think there is about six and I think we are one of them and I think Connecticut is one of them.”

Here are a few other tidbits from the poll:

WHAT A WEEKEND: Arizona State had one of the greatest weekends in Division I history, knocking off then-No. 2 Oregon on Friday and No. 3 Oregon State on Sunday. It's the first time a team has beaten two AP top-five teams in back-to-back games during the regular season since 2010, when Stanford topped No. 4 Xavier and No. 1 UConn.

“We have a lot of great teams, including us, in our conference,” Arizona State coach Charli Turner Thorne said. “Clearly, we were young and injured early, but we've gotten healthy.”

RISING HAWKEYES: Iowa had its own stellar week, entering the poll at No. 22 after knocking off then-No. 17 Maryland and beating then-No. 12 Indiana in double overtime. The Hawkeyes moved into a tie atop the Big Ten standings.

FALLING OUT: Princeton dropped out of the Top 25 a week after entering, not because of anything the Tigers did wrong. They won their lone game of the week, routing rival Penn by 20 points on Saturday. The Tigers were 25th last week with just 19 points. They received 30 points this week, but the huge wins by Arizona State and Iowa pushed them in and Princeton out. Michigan also fell out of the poll this week.