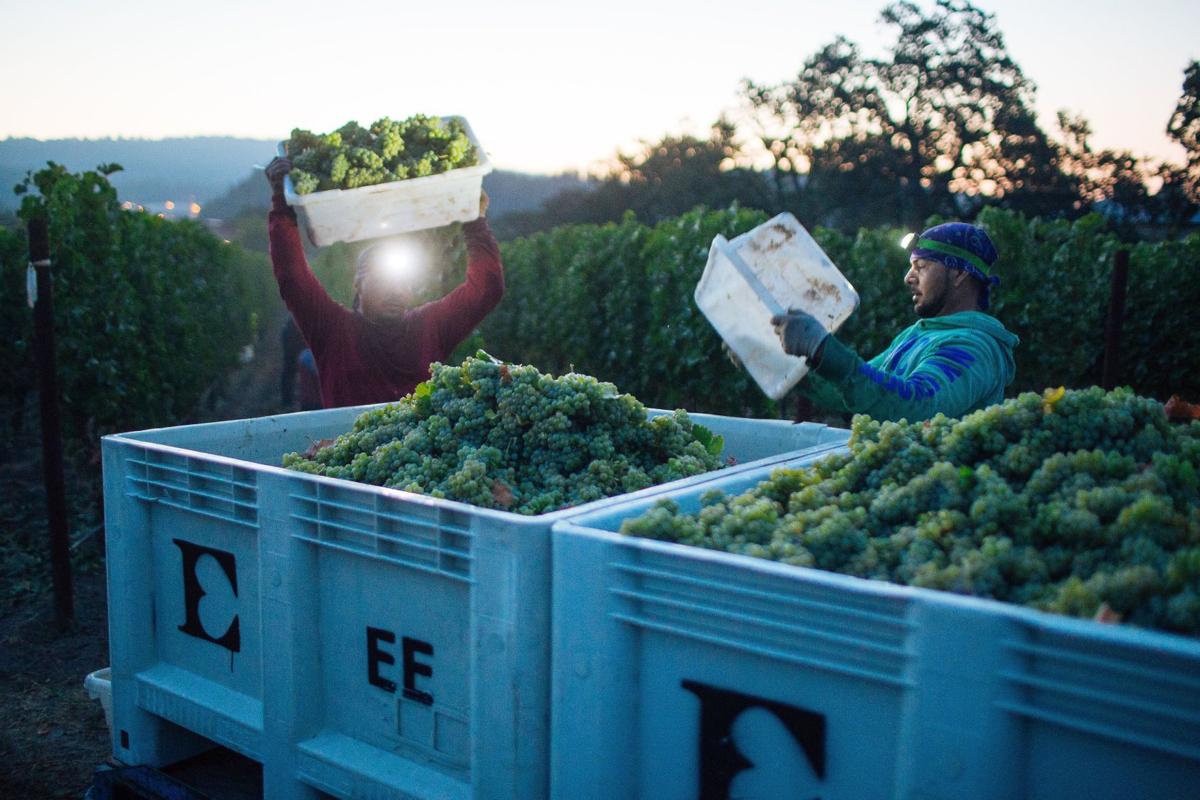 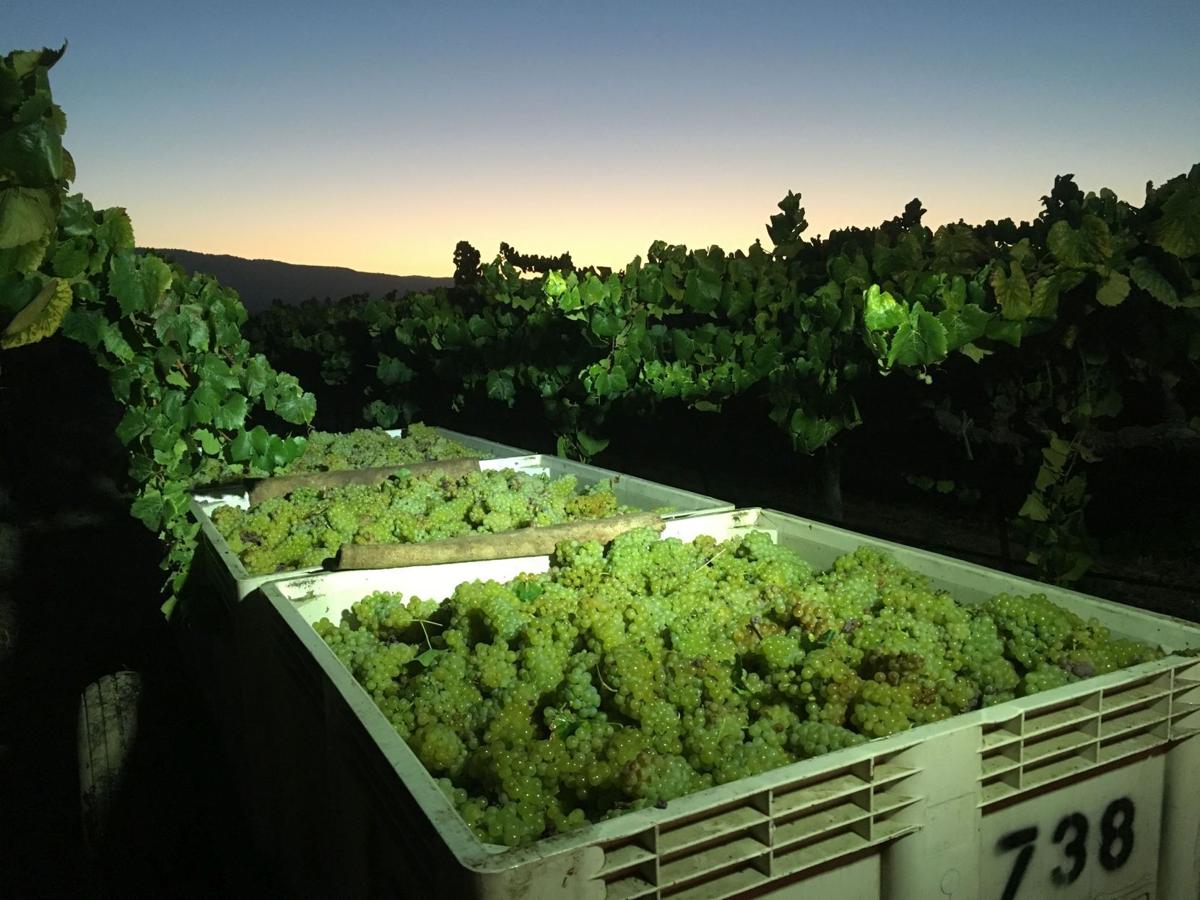 Night-picked chardonnay sits in the light of the sunrise on the Trefethen estate. 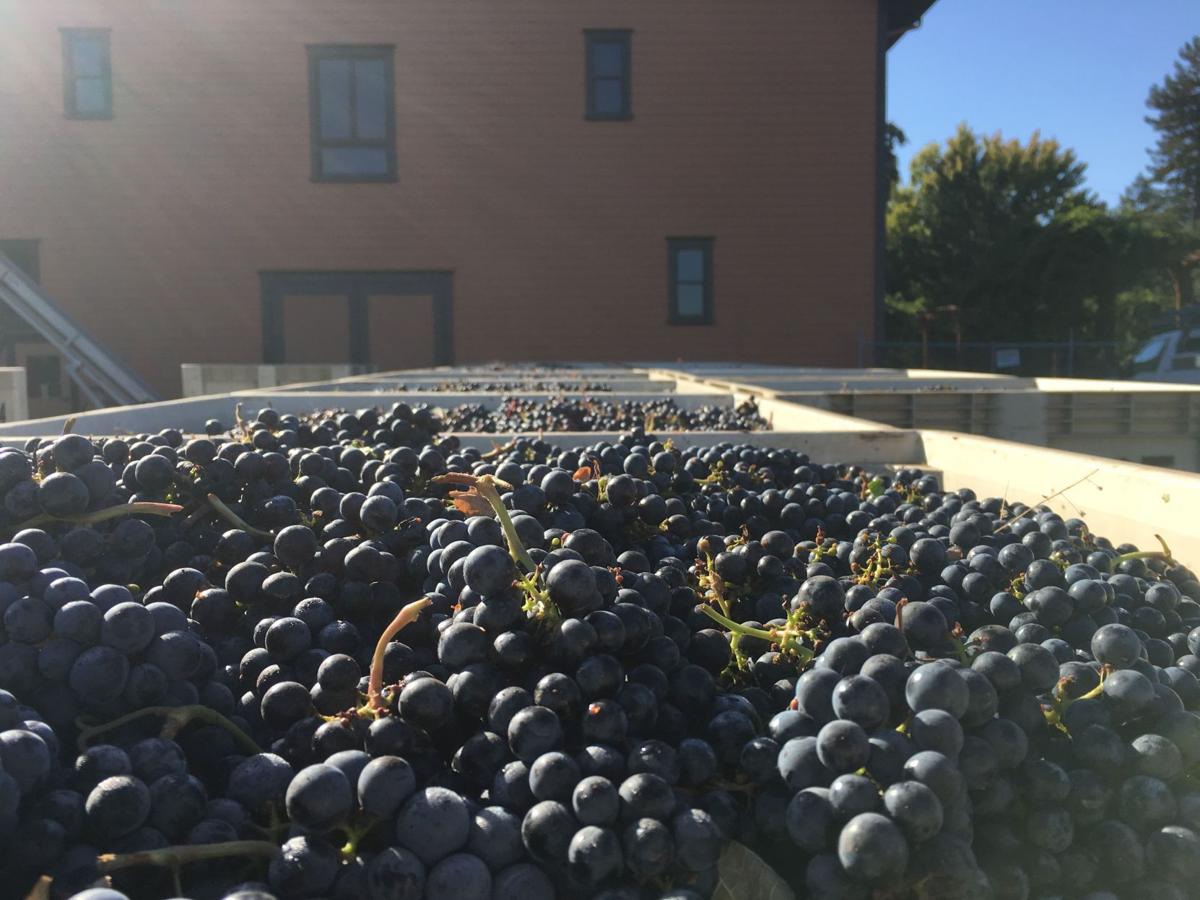 Merlot on the crush pad in front of the historic winery building at Trefethen Family Vineyards. 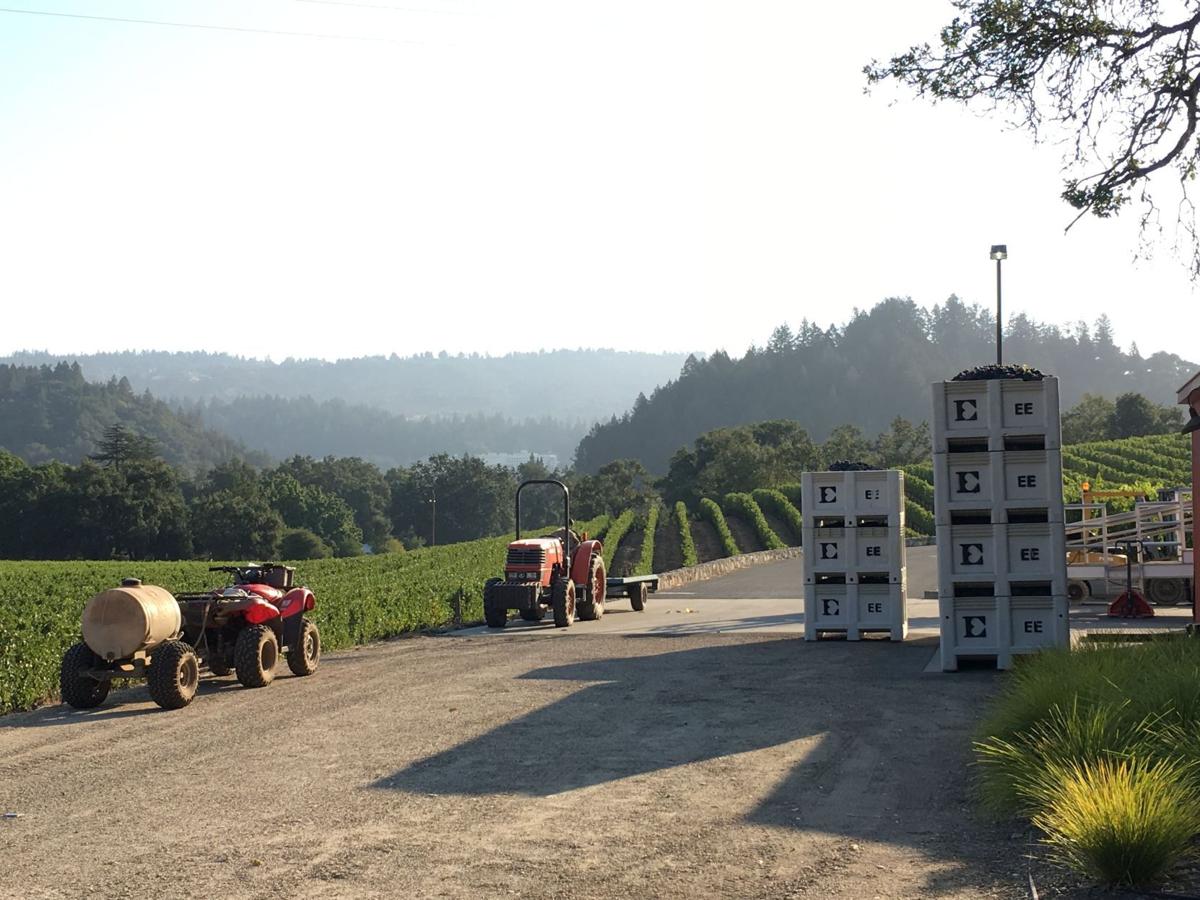 Sunrise at Ehlers Estate, where all of the 2016 merlot is off the vine and in the house.

Night-picked chardonnay sits in the light of the sunrise on the Trefethen estate.

Merlot on the crush pad in front of the historic winery building at Trefethen Family Vineyards.

Sunrise at Ehlers Estate, where all of the 2016 merlot is off the vine and in the house.

Cabernet sauvignon is being harvested in some parts of the Napa Valley, the Star’s harvest correspondents report.

Growers in the many regions mention that some early cab is being harvested, although the bulk of the crop is still on the vine.

“Looks like we are averaging about two weeks later than 2014/2015, closer to our historical averages,” said Alexander Eisele of Volker Eisele Family Estate, which harvested its first cab on Monday. “Overall tonnages are up with nice quality reported in all varietals so far.”

Here’s the latest installment of the 2016 harvest report, organized by American Viticultural Areas:

Calistoga — Matt Crafton, Chateau Montelena — “Another terrific week. Just when things seem to be slowing down, another shot of heat or offshore flow moves the fruit along. I’ve been blown away by how balanced the fruit chemistries and flavors are this year as most of us have had the luxury of being more methodical and patient than in years past. Yields have tended to be a little lighter on the hillsides and the bench but heavier on the flats. There’s certainly a lot still hanging across the AVA as we move into the latter half of September.”

Howell Mountain — Pat Stotesbery, Ladera Vineyards — “For all the talk of a possible early harvest it is looking like anything but. Even with the recent heat, reds are still behind predictions and remain weeks away. Even the eastern slopes of the mountain are not picking yet; very unusual. What this bodes is the possibility of a very compressed harvest and a challenge to tank space when things do really get started. And the later it goes the more compressed it could get. But everyone still says the fruit looks great.”

Diamond Mountain District — Dawnine Dyer, Dyer Vineyards — “Well, if we wanted heat, we got it this week, and fruit on Diamond Mountain has started to arrive at the wineries on a regular basis. Armstrong Ranch on Kortum Canyon has picked enough to confirm that their crop is lighter than average. They attribute it to a low cluster counts, something hillside vineyards are reporting in other AVAs as well. The Vineyardist, up near the county line, has begun picking, but with their complex slopes and orientations they will be picking selectively over the next few weeks. Folks are busy now but tell me that what they see they like!”

Chiles Valley District – Alexander Eisele, Volker Eisele Family Estate – “Harvest continues at a steady pace under perfect conditions. The remaining hillside zinfandel is being harvested, and now the zin harvest has moved to the flat land as well. Cabernet and merlot are lagging behind a bit, though the first cabernet is coming in today. Looks like we are averaging about two weeks later than 2014/2015, closer to our historical averages. Overall tonnages are up with nice quality reported in all varietals so far.”

Spring Mountain District – Stuart Smith, Smith-Madrone Winery – “This week has been much more active than the past several weeks. Most of the wineries are very active finishing up their whites or harvesting the spectrum of reds with merlot, cabernet sauvignon or even cabernet franc. It appears that the spring showers, elevation and maybe just plain old chance has created another vintage on the mountain with a goodly amount of diversity. For some, the merlot crop is back up to normal, yet for others it’s certainly larger than 2014 but nowhere near normal.”

St. Helena – Kevin Morrisey, Ehlers Estate — “Beautiful cabernet, beautiful weather, and cool refreshing moonlit Napa Valley nights. We’re having so much fun this year we just don’t want to go home after work! Early on in the growing season we saw a lot of single-cluster shoots in some of the cabernet clones, but the impact on yield is now turning out to be fairly minimal. We picked our sauvignon blanc on the same date as last year – with excellent quality and ‘normal’ yields. The merlot is all in about 10 days early, and also quite early, we’re picking cabernet every night now just a little at a time. This is about the best-looking fruit I’ve seen in the last eight years here at Ehlers Estate, basically perfect.”

Rutherford – Kristin Belair, Honig Vineyard & Winery — “Cool nights, crisp sunshiny mornings, red and gold leaves are appearing everywhere. With each passing day I am noticing more and more signs of fall. Sept. 22 marks the fall equinox and the first official day of autumn. I had a few moments over the weekend to check in with fellow Rutherford winemakers.

“Sara Fowler at Peju reports that they harvested their first Rutherford merlot on Friday. ‘Fruit came in heavier than estimate, but overall flavor profile was nice,’ she said. She doesn’t anticipate picking any additional Rutherford fruit for a few more weeks and says that the weather continues to be favorable for fruit development and maturity. Marisa Taylor at Rutherford Hill says that all of their sauvignon blanc has been harvested and that they will be wrapping up chardonnay by the end of the upcoming week. They have their first bit of merlot in and expect some cabernet sauvignon at the end of the week. ‘Good flavors and fruit looks great,’ she said. ‘Started slow and being patient even though anxious to get going.’

“At Honig, many sauvignon blanc tanks have completed fermentation and the last of the whites came in Monday. We started picking reds on Thursday last week and the beautiful fruit is coming in at a nice moderate pace.”

Oakville — Linda Neal, Tierra Roja Vineyard — “Oakville is simmering with activity as we come to the end of our first full red week. From Tierra Roja, where we started by picking the top of the hill, I have a nice view of our famous neighbors, Screaming Eagle and Rudd, also getting under way this week. I visited three Opus crews picking at To Kalon. Juan Martinez says the ‘nicer weather of 2016 has resulted in beautiful fruit, fuller clusters and less dehydration, partially due to more protective leaves.’

“Mark Fasi at Paradigm says, ‘This harvest/vintage is interesting in that the fruit is ripening with all of the flavors and chemistry at lower sugars even with the moderate temperatures we have had. Haven’t seen it quite like this for quite a while.’

“Most report yield as average to slightly below. Tom Garrett of Detert Family is an exception. ‘We thinned the crop heavily in the cab franc in order to get to an average yield,’ he says. ‘Not usually an issue with the old-vine cab franc (37 years old).’”

Yountville – Bill Nancarrow, Goosecross Cellars — “The last week has been intriguing as grape sugar accumulation somewhat stalled. This gave time for flavors to develop at a sedate pace, and also allowed the wineries to prepare for what looks to be a big push this coming week. There was also time for a quick bite at Pacific Blues for lunch. Red grapes are being picked on a daily basis and a few remaining whites will come off early this week after the hot weekend. Everything still looking, smelling and tasting great!”

Atlas Peak – Melissa Apter, Antica Napa Valley-Antinori Family Wine Estate — “It’s a stop and go harvest for us so far. Little by little we are bringing in fruit but still haven’t had the constant flow of the harvest craze yet. After this second September heat spell we had over the weekend, we anticipate anther mini rush to bring in a little more fruit this week but we are sitting patiently on the mountain waiting for the ‘big rush’ to come. We still have some chardonnay left to pick but brought in our pinot noir and some sangiovese already. The cabernet is right around the corner with some blocks sampling in at 24+ Brix this week.”

Stags Leap District – Elizabeth Vianna, Chimney Rock Winery – “This last warm weekend was probably just what we needed to get the 2016 vintage really rolling. Remi Cohen at Cliff Lede Vineyards reports they are finished with merlot and have been harvesting some cabernet sauvignon. She expected more cabernet this week and said that they are ‘enjoying the flavors and grateful to be able to pick at lower sugar levels than in other years.’ Elias Fernandez, winemaker at Shafer Vineyards, crushed some hillside cabernet early in the week and has more SLD cabernet coming in this week. Here at Chimney Rock, we are harvesting more merlot and our hillside petit verdot early this week. Our first cabernet sauvignon is getting very close and the team is ready and excited to get the harvest in full gear!”

Mount Veeder — Sander Scheer, Hess Collection — “The heat seen over the last few days has meant that the picking schedule is getting more full. With more heat coming at the end of the month we will no doubt be racing to get vineyards picked soon. This week should also mark the wrap-up of white varietals here on the mountain, which are showing the best quality seen in years. Malbec will be first for reds for us and it’s knocking on the door!”

Oak Knoll District — Jon Ruel, Trefethen Vineyards & Winery — “We had temperatures in the 90s on three days over the weekend, making for a total of just six such days since late July. The grapes have responded positively with a dramatic increase in flavor development. The harvest of reds has yet to reach a hectic pace but, with the vine canopies already changing colors, it is clear we are still tracking earlier than usual and are thus about to get very busy!”

Coombsville — Tom Farella, Farella Vineyard — “The weather has been a bit of a roller coaster with low lows and dewy mornings and now a warm spell to really get things moving. Vine stress is showing up on the weaker sites and fall is in the air. We in Coombsville heard rumors that things really fired up in Oakville, but it remains steady here. Some merlot now picked and cabernet on the verge, so there should be a couple of interesting weeks ahead.”

Carneros – Chris Hyde, Hyde Vineyards — “As chardonnay and pinot noir harvest wraps up in Carneros, the cool weather pattern has yielded to an abrupt warming pattern. This will be ideal for the approaching harvest of late season varieties, which began at Hyde Vineyard on Friday.”

Wild Horse Valley – John Newmeyer, Heron Lake Vineyard – “For the fourth year in a row, the winegrapes were ‘all in’ before the middle of September. The only other years since 1989 which had such early harvests were 2004 and 2008. Looks as if the microclimate of our little valley has changed! Our labor force has certainly changed in 28 years: markedly older, more skilled, better paid, and driving newer vehicles.”