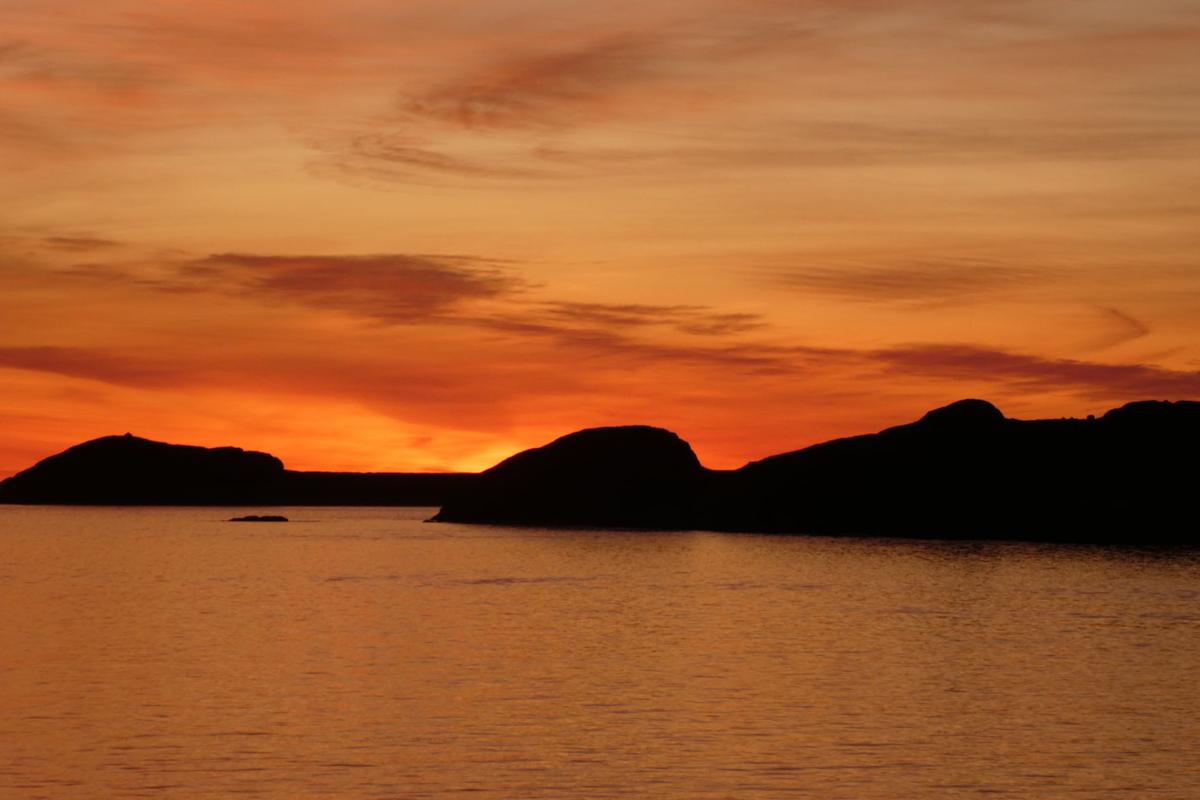 A sunrise in Newfoundland. 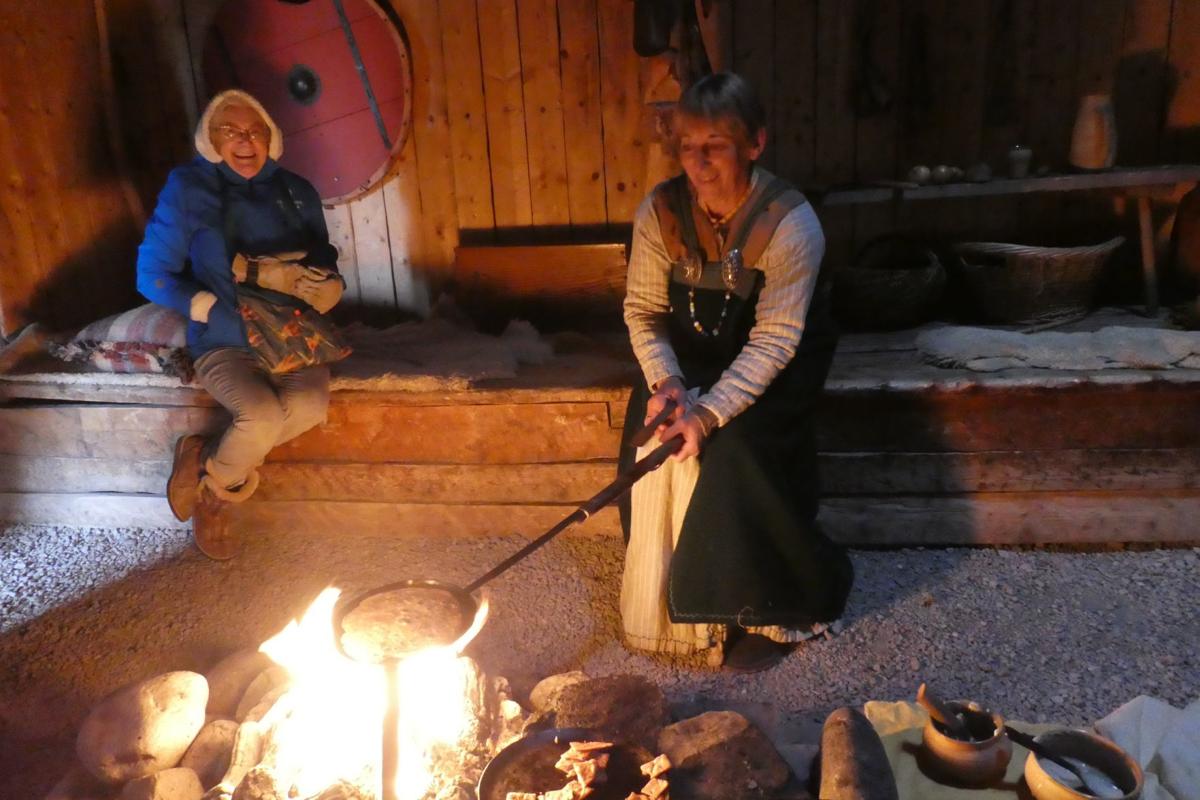 A woman cooks in a reproduction of a Norse hut at  L'Anse aux Meadows, the only authenticated former Norse settlement in North America. 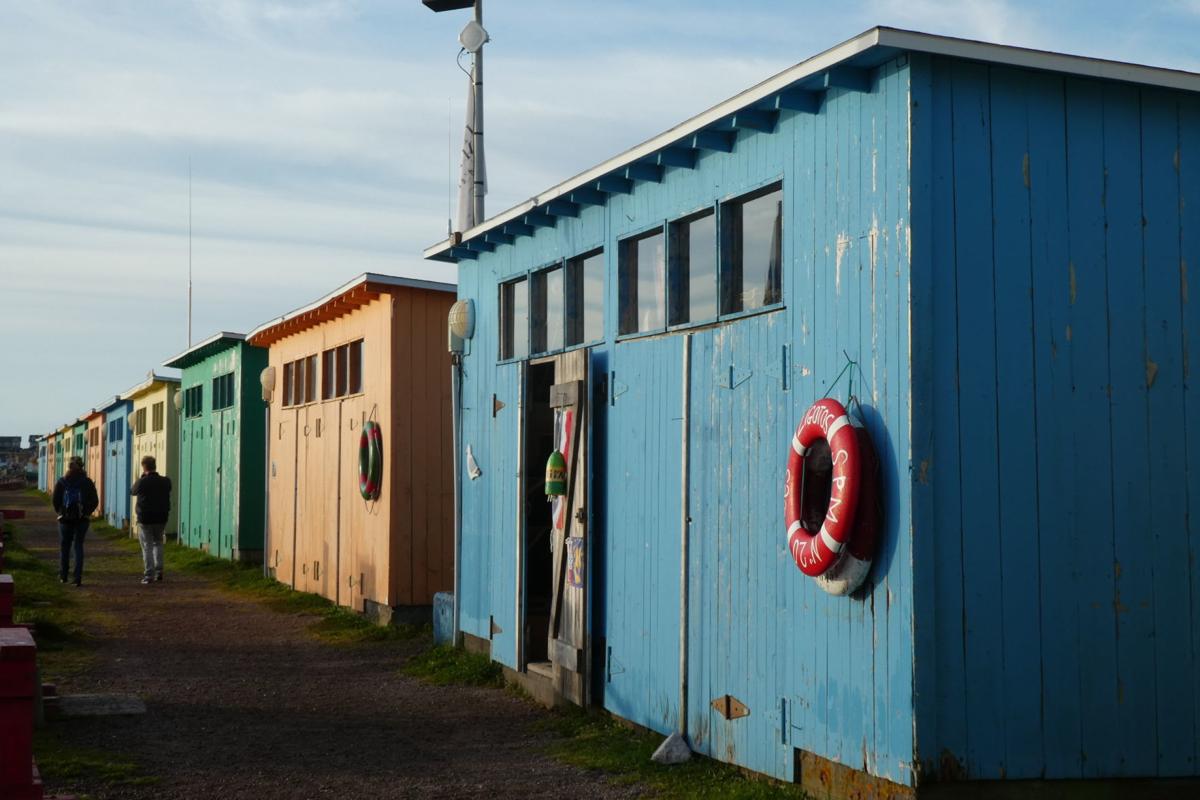 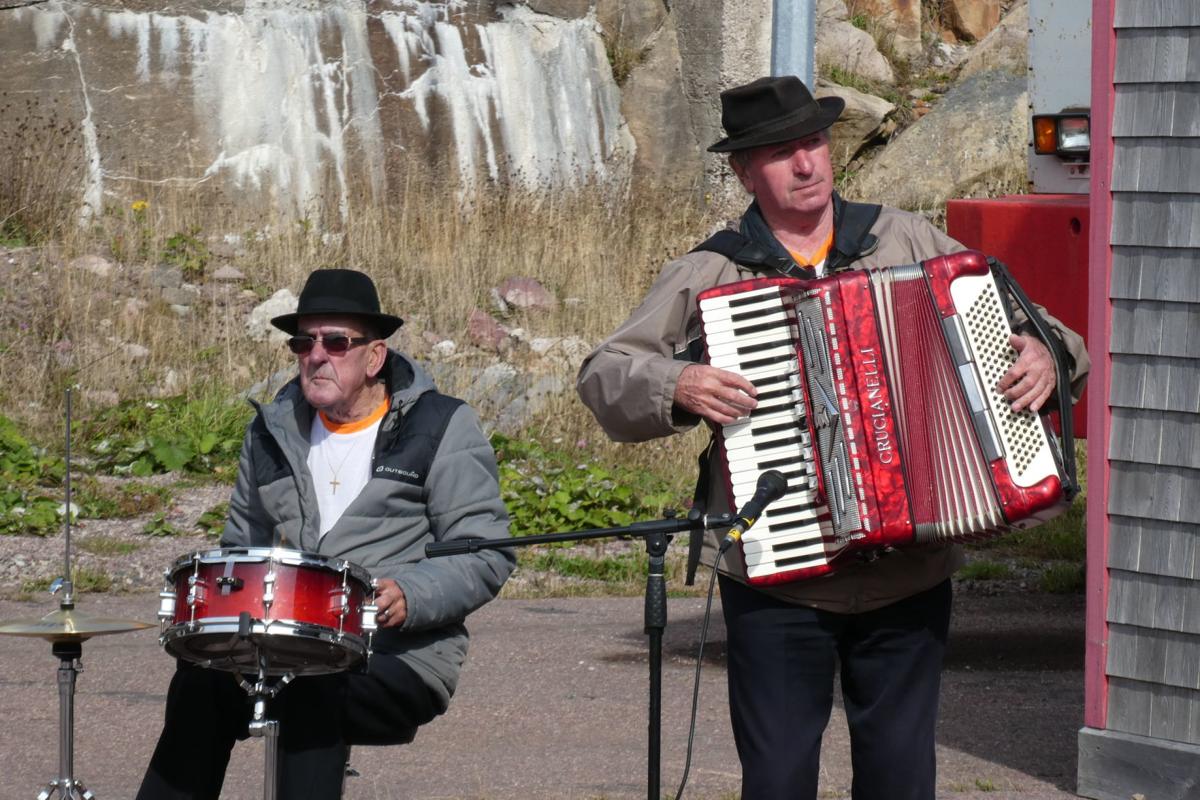 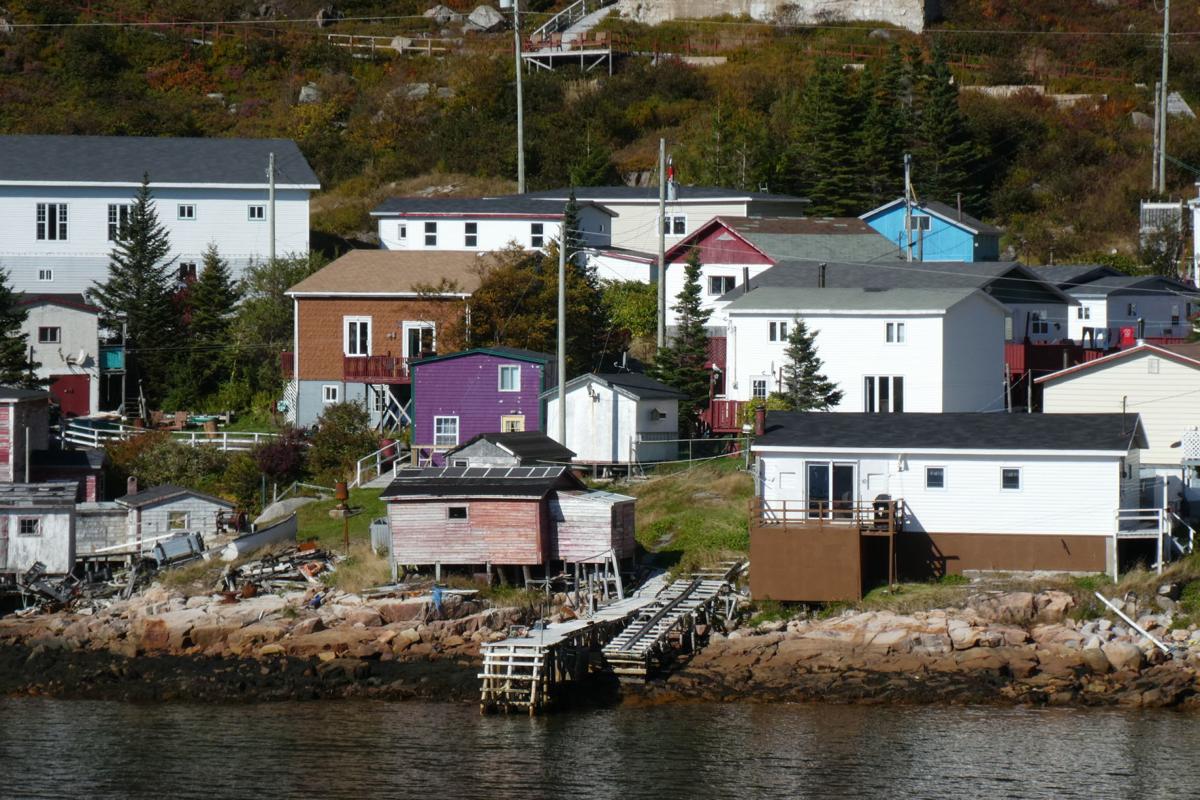 The view from the river of an outpost village in Newfoundland. 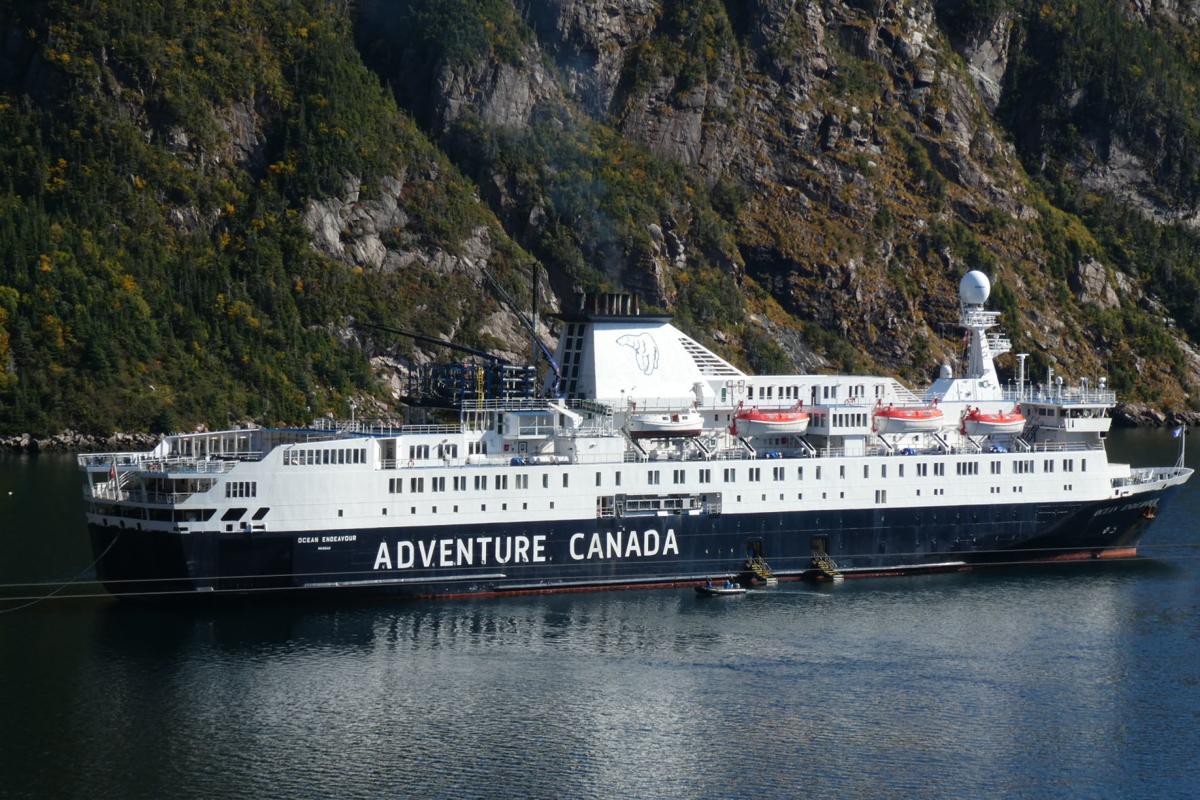 Maybe I took the wrong gangplank---Is this the Love Boat or a Looney Bin?

The crew seemed way too happy to welcome us aboard as we were being clouted with hurricane-like winds and a fierce downpour. Harmonica music blared over the loudspeakers, followed by a sermon-like voice urging us to "release your tensions on this wonderful day."

Did I just join a cult ship patterned after the Hollywood film "The Master?"

None of the above. I was aboard the Ocean Endeavor, flagship of Adventure Canada expeditions, and its unofficial motto is simply, "Stuff happens."

"Oh, we have our stressful moments," said expedition leader Matthew J. Swan, "and sometimes have to go from Plan B all the way to F. We just roll with the punches."

The Ocean Endeavor is an ice-class vessel designed and equipped for expedition cruising. It can, and does, go into some of the world's most remote destinations.

Outfitted with 20 Zodiacs, the nine-decker can accommodate about 200 passengers. There were no vacancies as we began our 11-day expedition that would circle the Canadian island province of Newfoundland, with a stop in Labrador and the nearby French islands of Saint Pierre and Miquelon.

But first, back to those too-happy crew members. Adventure Canada has been in operation for more than 30 years. It makes money, but also gives a percentage away to causes ranging from climate control to hockey rinks in poor remote areas.

So it may seem a little cult-ish, so be it, but it's a good cult.

"We choose our staff very carefully...make sure they share our values," Swan said. "And we try to get our passengers close to nature, immersed in remote cultures, so that it will transform the way they see the world and their roles to make it a better place."

Newfoundland, Labrador and those French islands are at the northeast corner of North America. All together, their size is about as large as California. There are about 520,000 Newfoundlanders (don't call them Newfies, many take offense).

Labrador, although three times the size of Newfoundland, has only 40,000 residents (some say the moose population is larger), and the French isles of St. Pierre and Miquelon has about 6,000 residents, mostly middle-aged, because France stacks the islands' top jobs with employees from the mainland, forcing many of the young islanders to go to Quebec or France to find work.

"It's a bit like a revolving door," a lady at a St. Pierre gift shop said. "We lose our young ones, but France does take good care of us."

We began our cruise at the capital city, St. John's, population 120,000, in southeast Newfoundland. Our first surprise was the large number of Irish in the city. Second was the vibrant almost outrageous colors of the houses in a section called The Battery -- reds, yellows, greens and sometimes all three.

Newfoundlanders have a way of fracturing the English language humorously. They even have their own dictionary, "Who knit ya?" means 'who are your parents,' "I'm gutfounded, fire up some scoff," means you're very hungry, and "Stay where you're at 'til I comes where you're at" speaks for itself.

We cruised north past some majestic scenery -- thick forested mountains on one side, rocky cliffs on the other. The entire province of Newfoundland is affectionately referred to as "The Rock." I learned that the Appalachian mountains, born in Alabama, ends its journey here.

At the northern tip, we spent a day at L'Anse aux Meadows, the only authenticated former Norse settlement in North America and a UNESCO World Heritage Site. Sod huts like the Norse invaders lived in (with their Irish slaves) have been reconstructed in scale and details.

On the west coast, we visited another UNESCO site, Gros Morne National Park, 1,120 square miles of mountains, bays, fjords and forests. It is also one of the few places on the planet where (they say) you can actually walk on the earth's "mantle," called the Tablelands.

Our guide described the mantle as a solid bulk of the earth's interior that rose to the surface during some sort of plate collision underground several hundred million years ago. He lost me a little after that and I really don't understand it.

But those unscheduled stops -- Plans B through F -- made because of weather conditions, actually stole the show. Little remote stops like Francois (pronounced France-way because of old map spellings).

At this writing, Francois had, by actual daily count, 68 residents, about 100 dogs, a general store, post office, museum, tiny schoolroom and a cemetery. There are no roads in or out, only pathways and a wooden boardwalk to get from one place to another.

The government has offered to assist the 68 brave souls to relocate, but each time the villagers have voted to stay. "We've got pretty much all we need here," said a middle-aged fisherman named Clyde who was born and raised in Francois.

"A ferry stops by once a week and we can go to another town nearby. There's no roads there either, but a helicopter lands once in awhile."

There were four pupils and two teachers at a little schoolhouse while we were there. Births are rare as teenagers leave Francois for other areas of the province to find work.

Clyde still supports his family by fishing, taking his catch by ferry to the nearby village and selling it at a marketplace. "I like it here, but then I have to...there's only three ways out, by water, by air or up there," he said, pointing to the cemetery.

"We got our own liquor store now," Clyde added. "Before, we had to go by boat to the French islands to get some and smuggle it back. You know, I've never even seen St. Pierre in the daylight."

Another Plan F stop was to the small outpost of Conche, population nearing 200, on the central coast, and meeting a whirling-dervish, Jill-of-all-trades named Mary Foley.

Mary, in my eyes, is Conche's No. 1 tourist attraction, and would rank within the top 10 of all Newfoundland, Labrador and the French isles put together. The youngest of 15 children, she has flaming red hair, blue eyes, and a ballet dancer's body that is in perpetual motion.

She is the unofficial Conche greeter, a substitute teacher, mother of two, a one-woman church choir, dancer, singer, chef, event planner...and I'm sure she sweeps up whenever she's through.

We met Mary when we arrived, she gave us a talk in church, cooked and served us at a community festival, entertained us with her songs and Irish jigs after we ate and bade each one of us goodbye at night's end.

I asked Mary what made her seemingly in three places at the same time.

"Don't know. A lot of people think there's something wrong with me. But maybe it's because I got a fly up my you-know-where."

Dominick and Susan Merle are travel writers based in Montreal. Dominick is co-founder of the International Food, Wine & Travel Writers Association.

For Newfoundland and Labrador, newfoundlandandlabrador.com.

Pack so you can dress in layers as there are wide temperature ranges; bring rugged hiking boots and rain pants for the Zodiac rides.

Expect unexpected itinerary changes during the cruise because of weather conditions.

Armchair travel: Slovenia, castles, mountains and quiet away from crowds

Slovenia, in eastern Europe, combines striking scenery with a fascinating history for an off-the-beaten-path experience.

Before the coronavirus lockdown, on river cruise on the Amazon, without internet, passengers were blissfully unaware that a virus had begun to spread.

A growing trend of boat-sharing, allows more people to try out the pleasures of sailing on San Francisco Bay.

To travel or not to travel? It's the existential question of this pandemic summer

To travel or not to travel?

After months of hunkering down, travelers are starting to think about summer escapes — but ones that are more budget friendly and health conscious.

How To Road Trip Safely During Social Distancing

A sunrise in Newfoundland.

A woman cooks in a reproduction of a Norse hut at  L'Anse aux Meadows, the only authenticated former Norse settlement in North America.

The view from the river of an outpost village in Newfoundland.