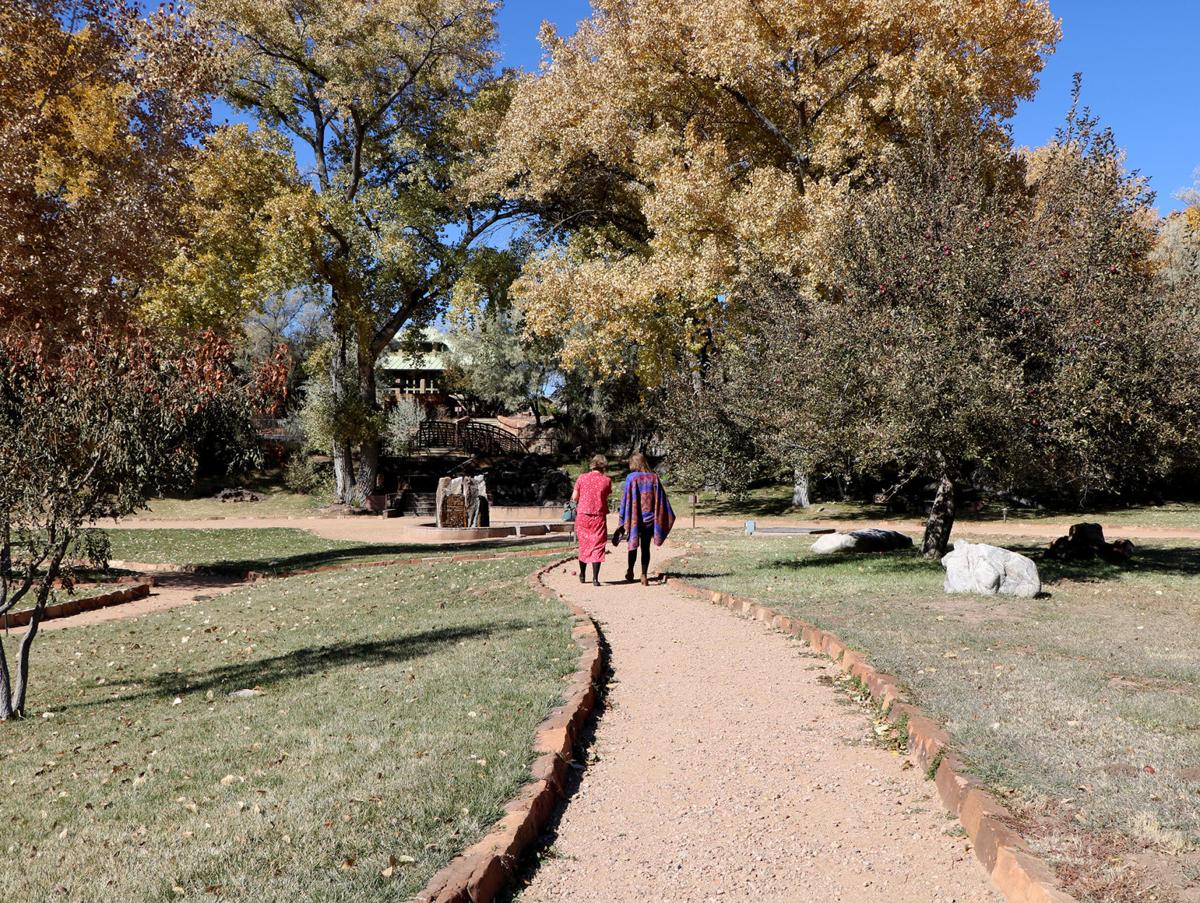 Resort guests stroll through the walking paths in the design of a medicine wheel, a sacred Native American symbol. (Jean Hopfensperger/Minneapolis Star Tribune/TNS) 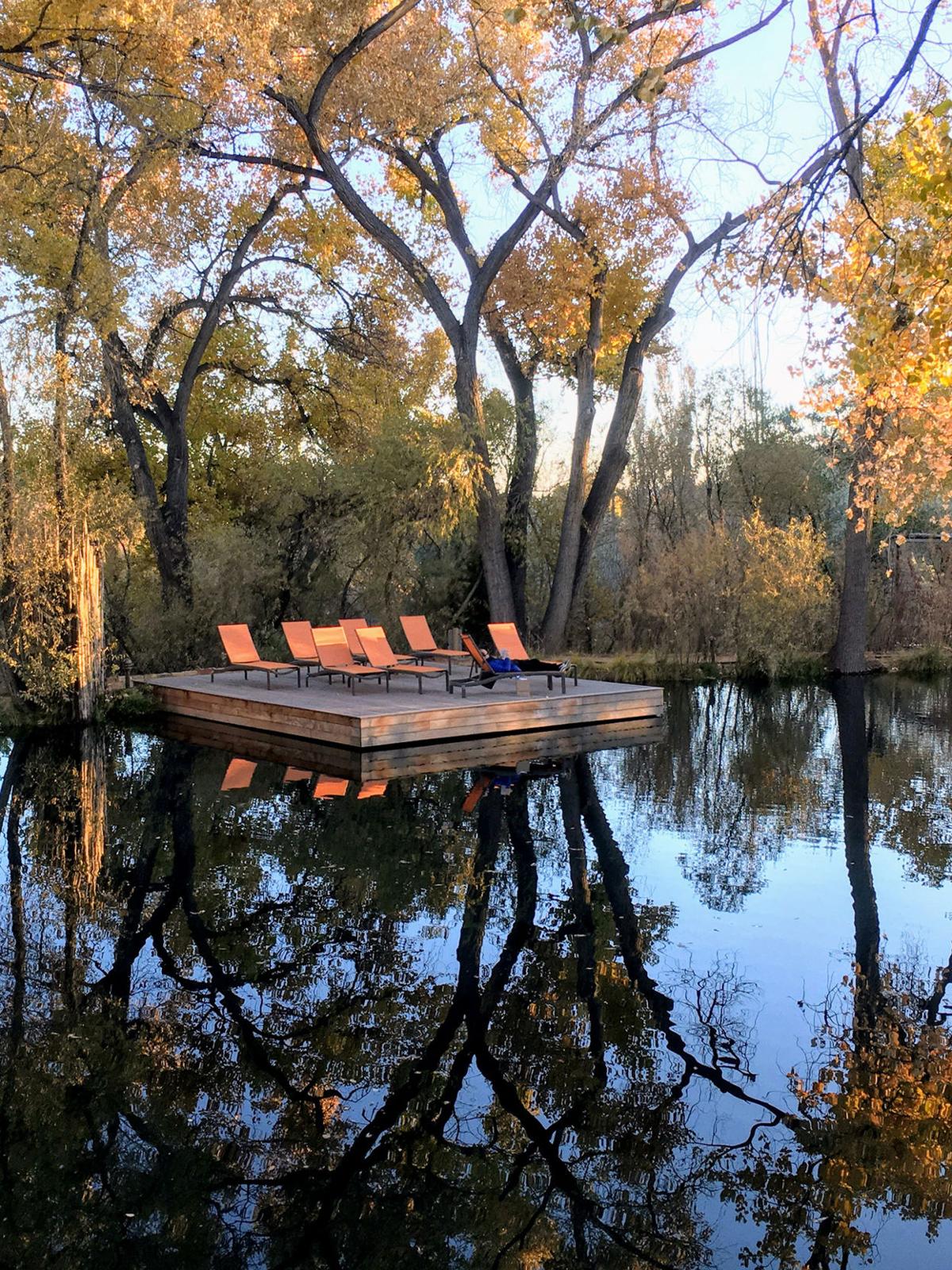 Resort guests stroll through the walking paths in the design of a medicine wheel, a sacred Native American symbol. (Jean Hopfensperger/Minneapolis Star Tribune/TNS)

I circled the boxes for hiking, chi gong, visual arts - and put a question mark next to chicken chats. I was laying the groundwork for my first foray into spiritual tourism, to explore what is one of the fast-growing segments of the travel industry - and maybe return more rested and centered.

Searching for answers to life's big questions, travelers increasingly are setting forth on journeys within. These seekers are a 21st century version of the religious pilgrims of old, but instead of heading to Jerusalem or Mecca, they are flying to specialty retreat and wellness centers, monasteries, natural wonders and beyond.

Countries across the globe are eyeing spiritual and religious tourism with intense interest. The United Nations World Tourism Organization held its first conference on "spiritual tourism for sustainable development" in 2013. It estimates that 330 million people visit religious sites each year, and spiritual tourists are among the ranks.

"We can see this burgeoning growth (in spiritual tourism)," said Daniel Olsen, a professor of geography at Brigham Young University who researches religious tourism. "People have always traveled for spiritual reasons but it's been tied to religion. Today people are seeking purpose in life, but not always within that religious structure."

That analysis resonated with what I learned from seekers I met during my New Mexico stay.

"I've always taken care of other people, now I need to find out about myself," explained a woman I met at my resort, Sunrise Springs Spa Resort. "What's my next step in life? Where do I go from here?"

As a religion reporter, I was curious about this trend. But where to go? I'm wary of New Age wu wu such as crystal or aura readings. I'm incapable of countless hours of meditation or yoga. And I needed to stay in the United States for budget reasons. (Although "Monk for a Month" in Thailand was tempting.) So I scouted online for "best spiritual retreats" and boom. Options galore.

The Sunrise Springs Spa caught my eye. The tranquil 70-acre resort outside Santa Fe is described online as a "sacred, nurturing destination spa where you define the experience you want."

I arrived on a heavenly November day of clear blue skies and cottonwood trees ablaze in autumn gold. After checking me in, a Sunrise worker explained the lay of the land. In front of us was a landscaped "medicine wheel" - circular walking paths laid out in the design of this Native American sacred symbol. To the left was a large "ceremonial circle" and a sweat lodge. Ahead were a dozen small buildings holding a cooking studio, meditation and yoga rooms, horticulture classes, two restaurants, a full-service spa and four "repose pools" fed by natural hot springs. Guest rooms were in earth-tone buildings that blended into the landscape. Guests were a mix of regular vacationers and spiritual explorers.

I decided to get a close spiritual encounter with those repose pools as soon as possible. But first, I needed to explore. With a resort map in hand, I peeked in the "Sages" library and found a woman quietly reading a book about fairies. I checked out a secluded patio, where a woman sat alone, writing in a journal. I discovered lovely hiking trails. And then I spotted a sign, "Cat Corral."

I approached the trailer next to it. A woman inside opened the door and asked "Did you want to come in?" Inside were a frisky group of kittens. Their keeper explained that the resort offers kitten play, puppy play and chicken "interactions" to its guests.

I asked how that meshed with exploring spirituality. She looked up and said, "Anytime you are interacting with another species, it's a spiritual experience."

Hmm. A second resort staffer described it this way: "Kittens are about innocence, about unconditional love. Isn't that what we seek?"

My first full day as a spiritual explorer started with a small group hike to the nearby Cieneguilla Petroglyph Site. Ancestors of the Pueblo Indians traversed this desert centuries ago, etching hundreds of primitive images on boulders along their trail routes. Human stick figures. Birds. Animals. A hunched flute player known as Kokopelli.

A drawing that stood out looked like a church topped by a tiny crucifix. Next to it were running horses, animals introduced to the continent by Spanish conquerors.

I marveled that I was viewing a real-time depiction of the arrival of Christianity. Wouldn't these ancient artists marvel that the spiritual practices they were forced to abandon now are embraced by 21st century people of European ancestry? Burning sage. Sweat lodges. Medicine wheels. All were available at my resort and at countless others. The circle of life?

Our guide, Ruth, frequently offered bits of wisdom gleaned from the stone. When she paused next to a star-covered boulder and explained that stars were used for navigation, she added: "Aren't we all still looking for our North Star? Our direction in life?"

This rich blend of nature, history and heart was cause for reflection. I walked quietly.

My afternoon at the resort was colored by a far too worldly episode: I got locked out of my room on the balcony. Fortunately I was holding a copy of the book "Seven Spiritual Laws of Success." I used it to bang on the metal balcony railings until - 10 minutes later - I caught someone's attention. I felt very successful.

Wide awake after that episode, I walked over to a class being held at the medicine wheel paths. In the center was the teacher, sitting next to a small plate of burning sage and a plastic Bic lighter. "Hi, I'm Diane," she said with a smile.

We soon were joined by five other women, offering a glimpse into 21st century spiritual pilgrims. One was a young woman who used to live in a nearby Buddhist monastery and felt profoundly drawn to the area. The others were in their 30s or 40s, working professionals, mothers and wives, seeking time out to ponder the next steps in life and to sample new spiritual practices that could help them.

For the next hour we learned about the four directions symbolized by the medicine wheel, which I found a bit confusing, and then were taught some chi gong moves. I hadn't tried chi gong before and found it pleasantly meditative.

By this point, the sky was darkening and the hot spring "repose pools" beckoned. I headed toward the spa center's outdoor area, where four big steamy pools were illuminated by dreamy blue lighting. Since it was a Sunday night, they were nearly empty. I slipped into a wide circle of warmth. Leaning back, I gazed at the stars, the same stars that the petroglyph artists stared at centuries ago.

And so, the worries of the world drifted away with the blue mists rising from the pools. That lovely state of emptiness that meditation is supposed to bring - I attained it with less effort.

I liked this path to enlightenment.

I didn't have time, or inclination, to do more. But one of my fellow spiritual travelers, Katy, had signed on for serious soul searching. She had met with a spiritual counselor, attended a three-hour sweat lodge session with a native healer, had her cards read. That was in addition to daily classes.

I saw her last at a "sound healing" session. Our instructor created different sounds, such as a chant or a drum beat or flute melody, and we closed our eyes and listened. Sitting on a floor pillow, I found it incredibly relaxing. But twice during the first chant, I felt a breeze on my cheek in the enclosed room. After class I mentioned this to the teacher. He paused, and then explained he had been "summoning the four winds." A coincidence?

This long weekend reminded me of the Introduction to World Religions class I took in college. There were practices I found strange, and some I found unexpectedly soothing. I concluded that we all have a lot of answers to our perennial inner questions, but are too preoccupied with life to listen. But with fresh direction, a serene setting and a few fellow spiritual travelers, insights emerge.

Unfortunately, I did not return to Minnesota in a state of inner bliss. But I did unlock some insights useful for this new year. On my last morning at Sunrise Springs, I sat quietly at the medicine wheel, enjoyed a nature walk, and went back to the cat corral. I watched how playing with rambunctious kittens really did lift guests' spirits.

Whether "chicken chats" could compete with these cuddly creatures for inspiration remained unclear. I'll need some divine guidance on that.

Travel dilemmas: I made these stupid travel mistakes so you don't have to

"Why do they let this woman out on her own?"

6 winter activities to try in Colorado that aren't skiing

Not a skier? Then you might feel out of place in Colorado during the wintertime. But the state has plenty more seasonal fun for you and the wh…

Americans have mixed feelings about travel and climate change

Many people love to travel. Many people also have concerns about climate change.