Become a Member
Read Today's E-edition
Share This
Cruising on the spiffy Sea Cloud, where the rich and famous have sailed the world since the 1930s
Share this
1 of 7 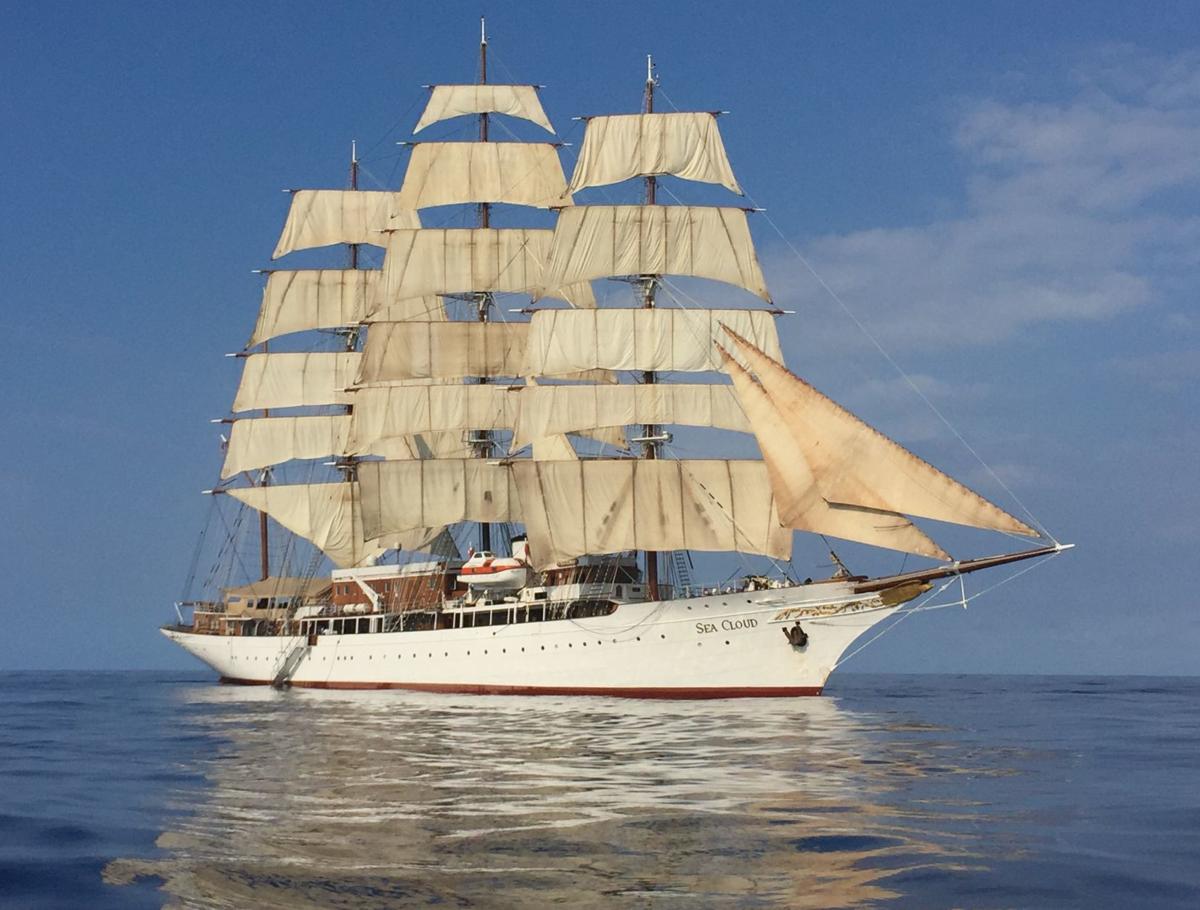 Sea Cloud, built in 1931, sailing in the Caribbean. The picture was taken in 2019 from a Zodiac launched from the ship for passengers. 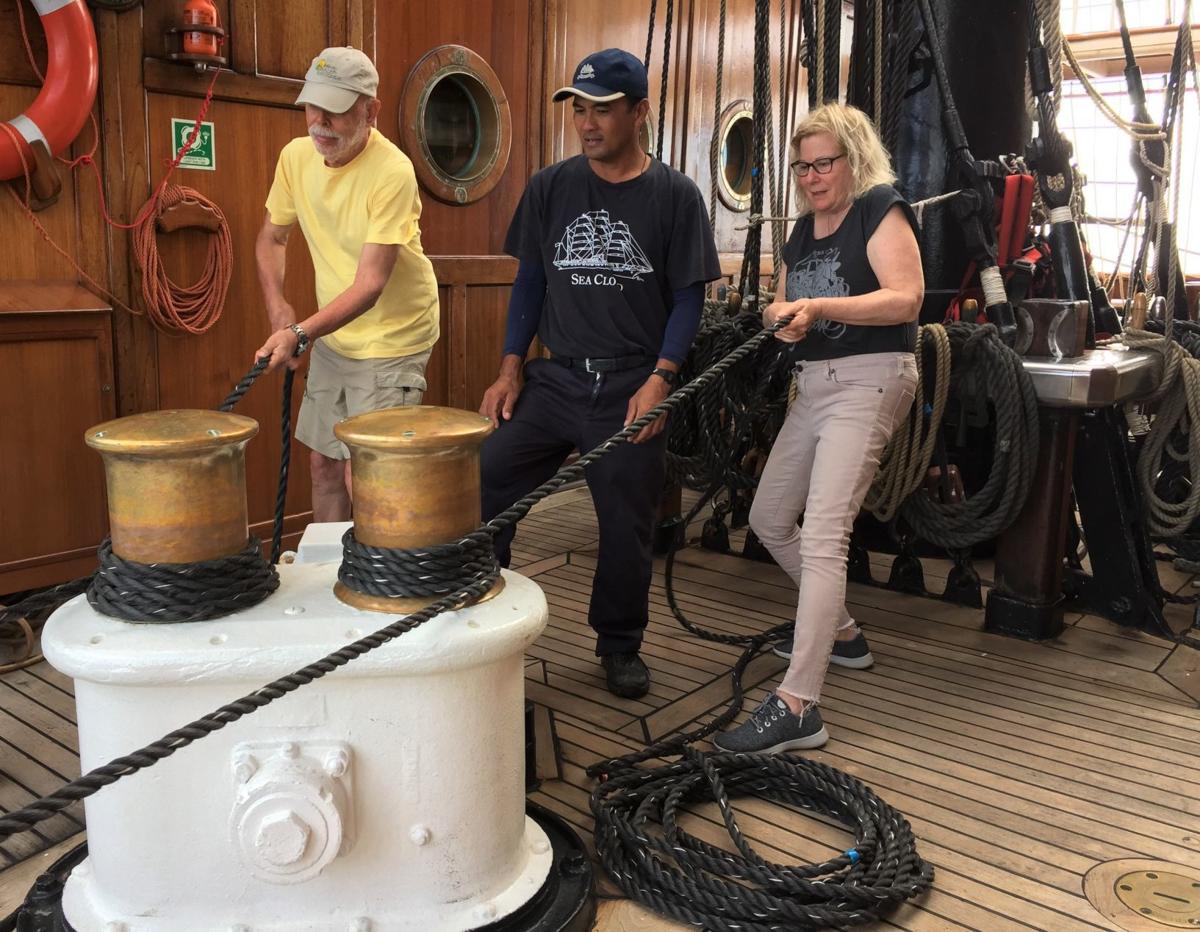 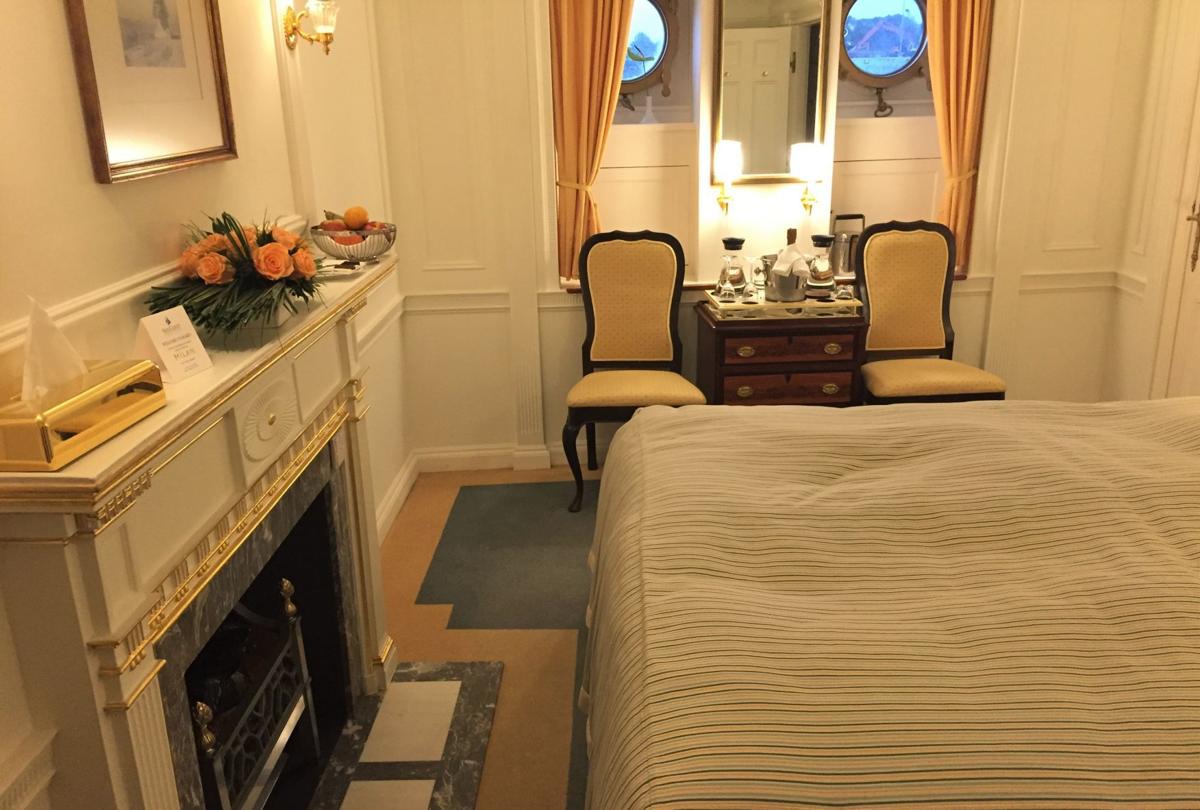 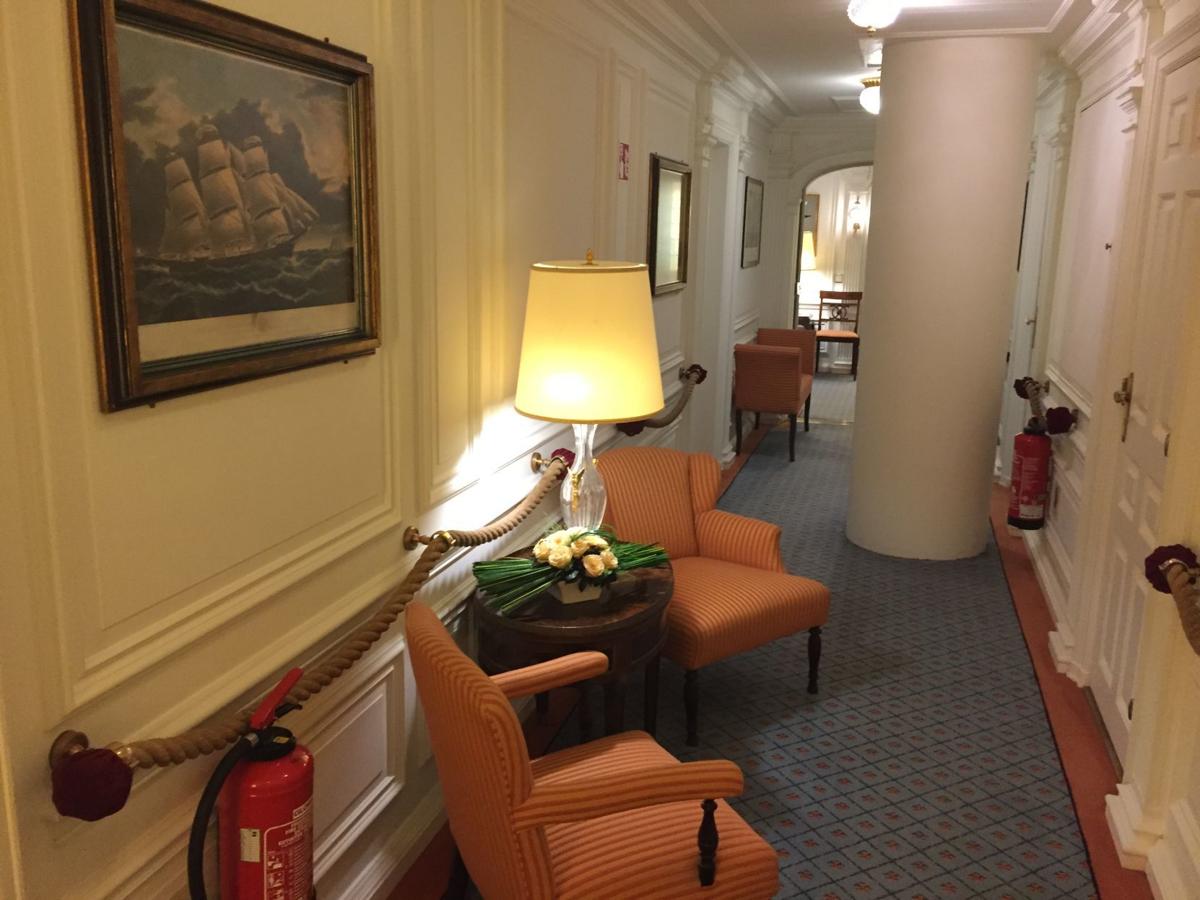 A hallway links the original 10 cabins on Sea Cloud. 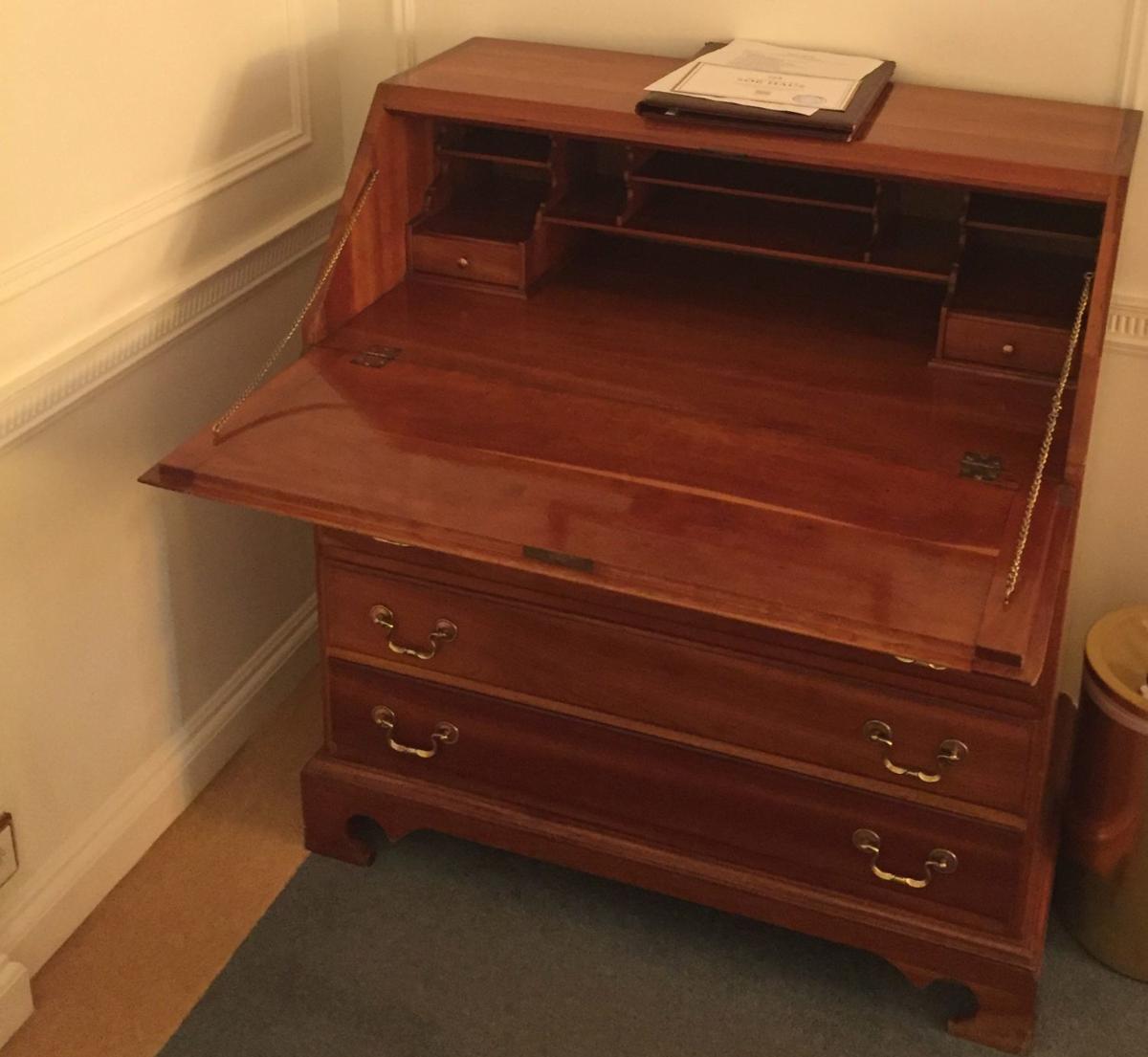 A desk where author James Michener wrote … something. 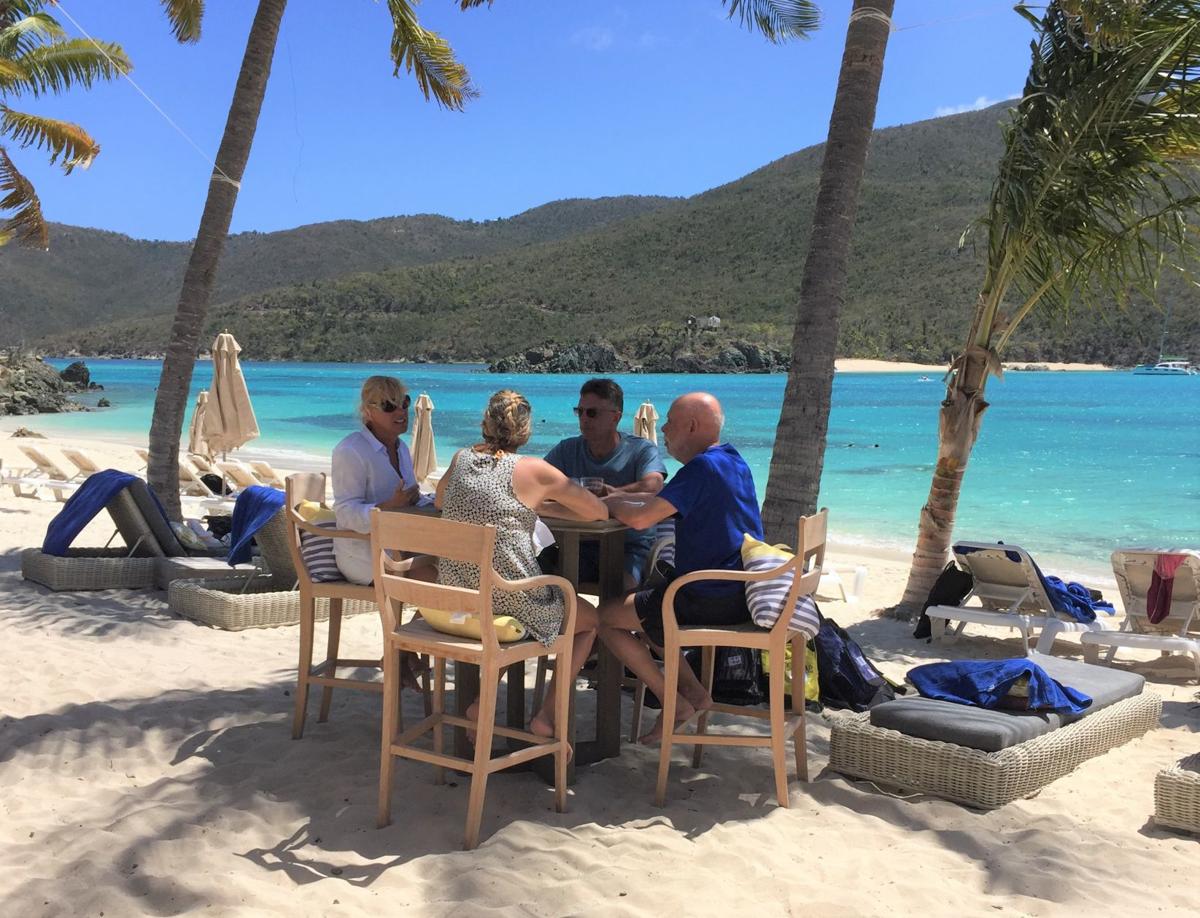 Lunch on a secluded island beach in the Caribbean, as the Sea Cloud lies at anchor nearby. 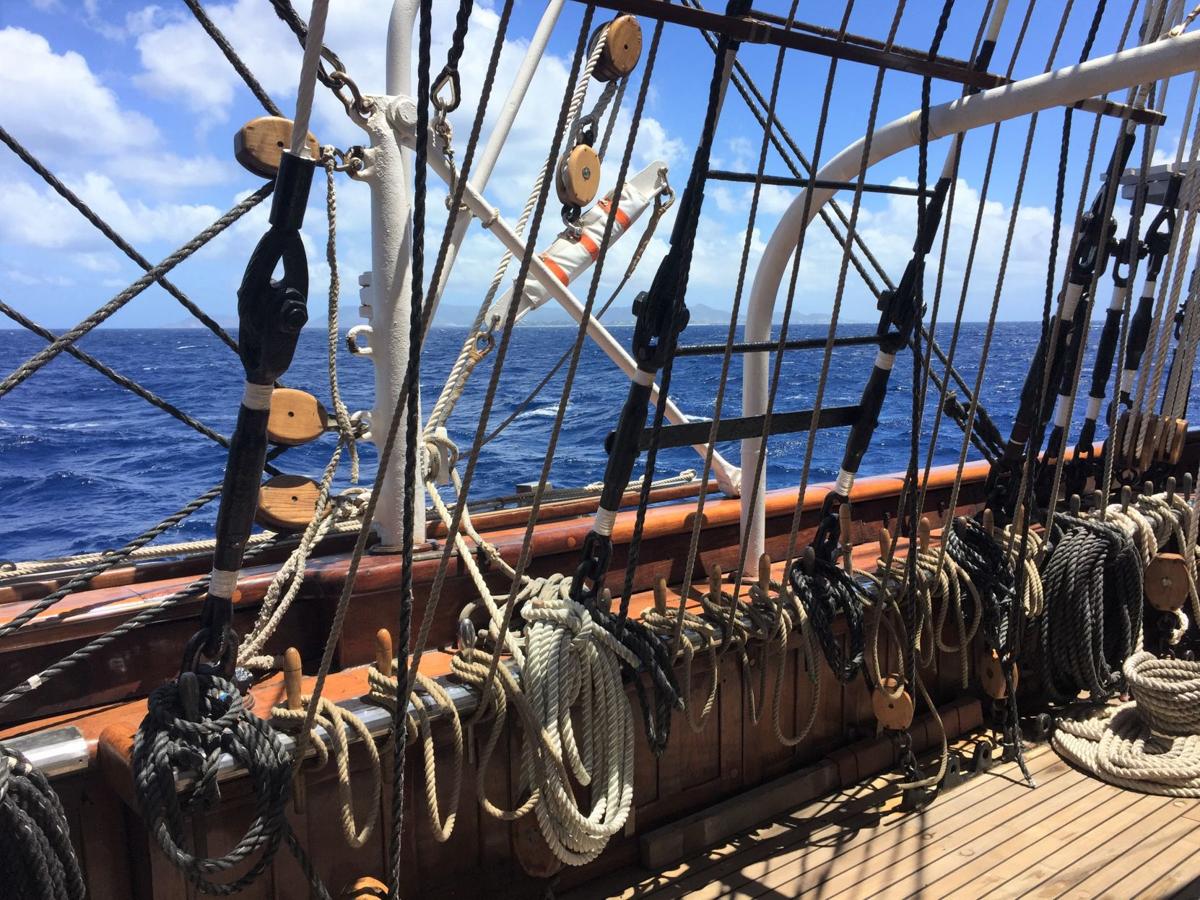 Some of the ropes in the rigging of Sea Cloud.

On a cruise aboard the famed sailing ship Sea Cloud, sometimes you may feel like an heiress, which is how the ship’s story began nearly 90 years ago.

Through the twists, turns, and capricious winds of history, Sea Cloud has survived glorious and stormy times to be rescued, restored, and returned to a place atop the wish list of many a worldly traveler.

Today, the Sea Cloud cruises mostly in the Caribbean during the winter seasons and the Mediterranean in summers, with as many as 64 passengers aboard. A crew of 59 tends to the sails that hang from four masts, cooks fine meals with an emphasis on what swims in the waters below, and caters to travelers hungry for a grandeur seldom seen at sea.

On deck, you are never far from the serious series of heavy ropes and pulleys used by the deck crew of 18 to raise and lower the sails, from the slaps of seawater against the hull, and from the winds that not only propel the vessel, but also occasionally remind passengers of how close they are living to the whims of weather. At night, you may want to climb the steps above the bridge where a hidden sundeck is perfect for stargazing.

Inside, dark wood paneling and collections of photographs from past sailings of the rich and famous speak to how well and how long the craft has creaked and rolled around the world. Cushy public rooms and the oldest, richest original 10 cabins, with antiques and oil paintings, have an odor of old money.

Today’s guests, mostly from Germany and the United States, are paying passengers who curl up inside in nooks for reading and relax outside on secluded decks, where, no doubt, the ship holds secrets from old conversations and liaisons. The Sea Cloud’s history is rich with tales about the storied people who sailed, starting with the original owner, General Foods heiress Marjorie Merriweather Post.

In 1931, Marjorie and her husband Edward F. Hutton commissioned the Hussar V, which later became known as the Sea Cloud. Edward Hutton, whose father began his life as an Ohio farmer, had risen through the New York financial world, forming the brokerage firm E.F. Hutton with his brother in 1904. The brother, Franklyn, also married an heiress, Edna Woolworth of the Woolworth dime store chain. Edward Hutton and Marjorie Merriweather Post also built Mar-a-Lago, now owned by President Donald Trump, in Palm Beach, Florida.

Marjorie Merriweather Post demanded the best and biggest luxury yacht in the world. All decks on the new four-masted barque were lined with teak. At a warehouse in Brooklyn, a ship’s interior was built to scale so Marjorie could oversee the work. Materials included costly fabrics and wall coverings, marble bathtubs, solid gold fittings, and open fireplaces. Marjorie’s cabin was (and remains) decorated in white, with Versailles-like furnishings, her husband’s cabin dark and woody like a men’s club. Each guest cabin had a different smell, as perfume was placed in the paint.

The Huttons sailed the world with their prominent guests into the mid-1930s when their marriage ended in divorce. The good days banged up against world War II. For the next 40 years the ship bobbed and weaved, first as a U.S. Coast Guard vessel (without sails), then as a yacht for Marjorie and her third husband. It was sold and became a retreat (named Angelita) for Rafael Trujillo, the Dominican Republic dictator, and his son Ramfis, who parked it in Los Angeles, inviting movie stars and such aboard. As the Patia, it was used for cruise charters; as Antarna, it sailed for an oceanic school; then, it lay unused and rotting for eight years in Panama until a group of businessmen from Hamburg, Germany, acquired the ship in 1978.

Gutted, transformed, and updated, with its old wood panels reused to hide the renovation work essential to meet modern standards for fire protection and safety, the Sea Cloud emerged as a marvelous match of past and present, a cruise ship sailing tall with its dignity restored.

With its small passenger list, community dining at unassigned tables, small inflatable boats for going ashore, and a convivial atmosphere among travelers who love sailboats, a cruise on Sea Cloud often feels like the private parties at its beginning.

We slept in a cabin where author James Michener stayed as a guest. We sat at a foldout desk where Michener no doubt wrote … something, maybe part of a novel or only a laundry list. We felt honored as we jotted notes for this article.

Our Sea Cloud days in the Caribbean, on a voyage out of Antigua, were a combination of day sailings and calm times at anchor for excursions ashore on an itinerary to small ports such as White Bay on Jost van Dyke and other quiet island beaches. At sea, most passengers read or relaxed in deck chairs, though some chose to help pull the heavy ropes attached to sails, after attending a special safety demo.

Excursions often were Zodiac wet landings, with lots of hand holding, extra towels, and refreshments. Snorkeling equipment was ours for the cruise. One afternoon the captain found calm waters and half the passengers on the ship climbed down a ladder and jumped into the sea for a swim. On another occasion, with sails up but light winds, a Zodiac took passengers on a circle around the ship for pictures of the Sea Cloud fully rigged.

Meals onboard were jovial and friendly affairs, passengers talking in German or English (the crew switches back and forth between the two languages). Breakfasts sparkled with choices, including a selection of tropical fruit, such as papaya and dragon fruit, meticulously cut by mandolin. Multi-course evening meals usually were served as a fancy dinner party, but without dress code. On a seat to your left might be a man in a business suit, while to your right sat a polo shirt and pink pants.

Ship brochures tend to concentrate on Sea Cloud’s fine dining room, but where the ship’s food service truly shines is outdoors. Several days at lunch the chef carved and grilled slices of fish that had been delivered to the ship that morning. Some evenings, dinner was out on deck. One night a Caribbean roasted pig was the prime feature. On another, a cloudless and starry night with a slight breeze and light music played on a keyboard, chefs prepared a BBQ with a huge display of crab. That night the crew provided after-dinner entertainment, a sea shanties singalong, including the many verses of "What Shall We Do with a Drunken Sailor?".

Reading details of the ship’s log, deep into Sea Cloud history, we felt that we were among a privileged group that clearly had fallen in love with the vessel. Comments from early guests included details about how they had made their personal fortunes. We had no such story to add.

David Molyneaux and Fran Golden write monthly about cruising trends. He is editor of TheTravelMavens.com. She is a freelance writer for various publications and websites, as well as guidebooks on river cruising around the world and cruising to Alaska.

Sailing on the Sea Cloud

Many of the voyages on the original Sea Cloud are chartered by Lindblad Expeditions and by alumni groups, so very advance booking is advised to locate a week or more when space is available. The original 10 cabins, accessible down a winding staircase from the dining area, are highly prized. These cabins have portholes; newer cabins, with easier accessibility, have windows.

Rates begin at about $500-$700 per person per night. Caribbean sailings include shore excursions, wine and beer at lunch and dinner. Each cabin gets a welcome bottle of champagne. A one-week Caribbean cruise Dec. 13, 2019, round trip from Barbados, starts at about $3,500 per person.

Is it creepy or efficient technology? This Princess cruise gives all 3,660 passengers a medallion so the staff know where you are at all times.

Study with Napa Valley College this summer in Spain and France.

Sea Cloud, built in 1931, sailing in the Caribbean. The picture was taken in 2019 from a Zodiac launched from the ship for passengers.

A hallway links the original 10 cabins on Sea Cloud.

A desk where author James Michener wrote … something.

Lunch on a secluded island beach in the Caribbean, as the Sea Cloud lies at anchor nearby.

Some of the ropes in the rigging of Sea Cloud.