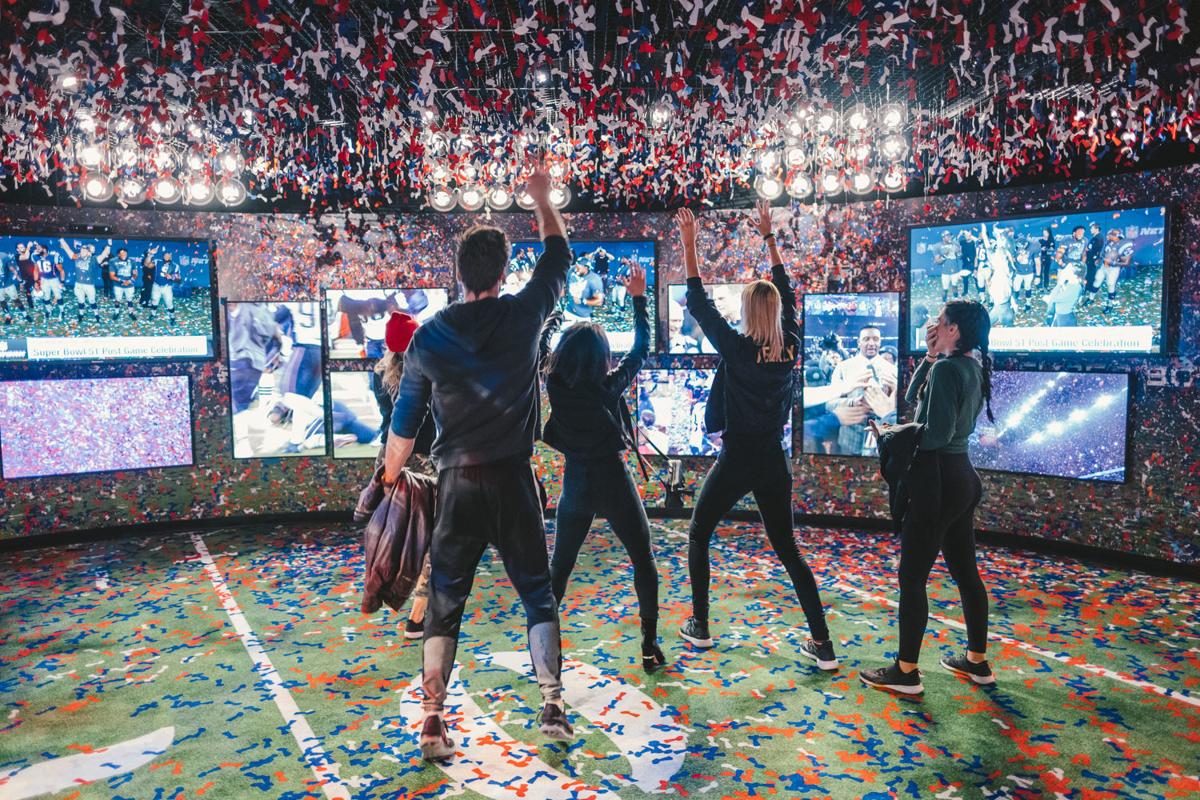 At NFL Experience Times Square, fans get in on a Super Bowl celebration. 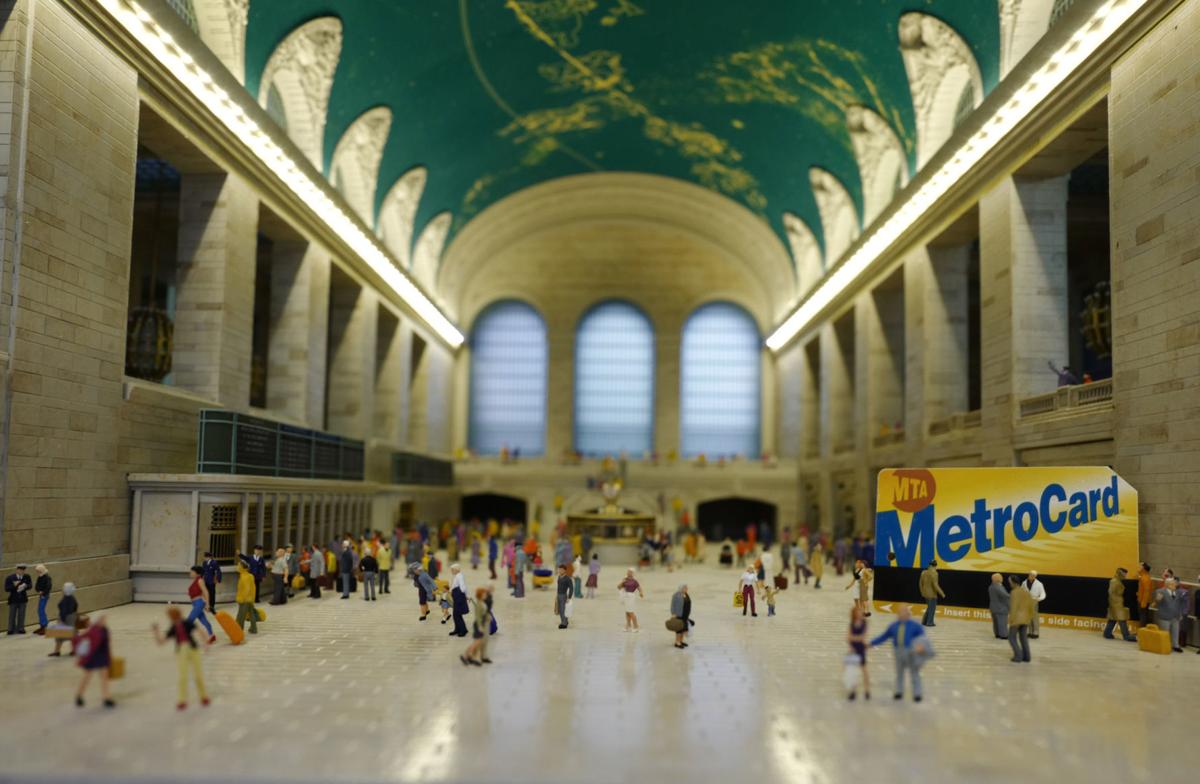 A model of Grand Central Station at Gulliver's Gate, a new attraction in Times Square. 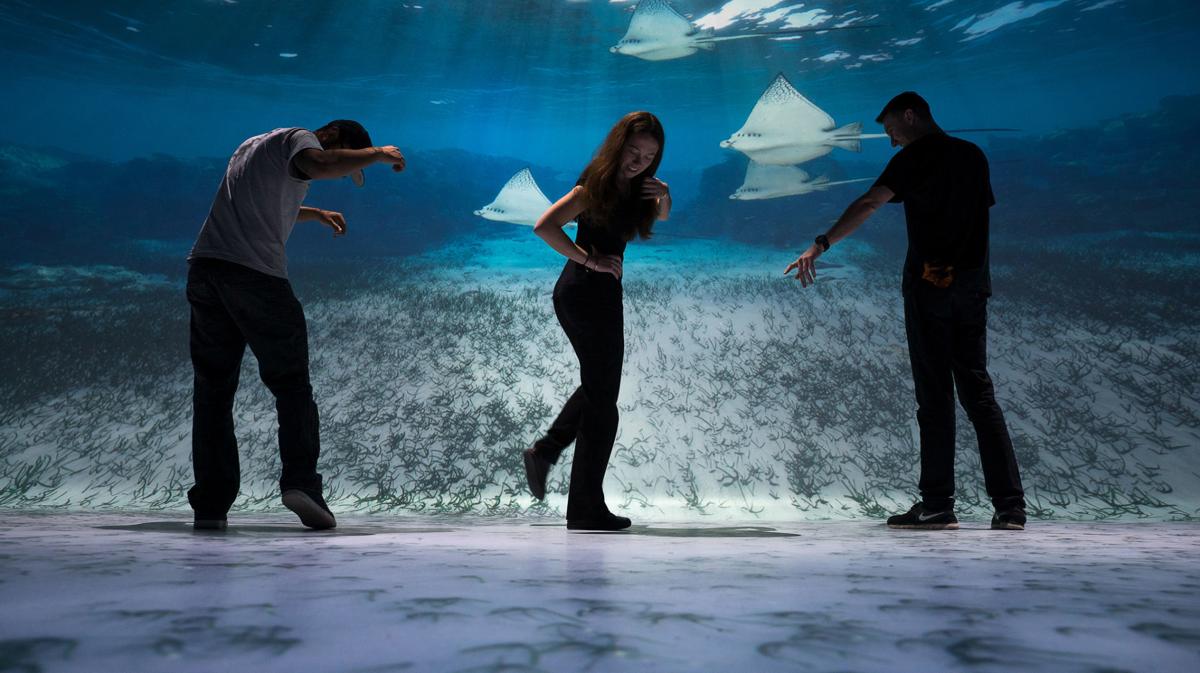 Visitors to National Geographic Encounter: Ocean Odyssey look at the sting rays swimming beneath their feet. 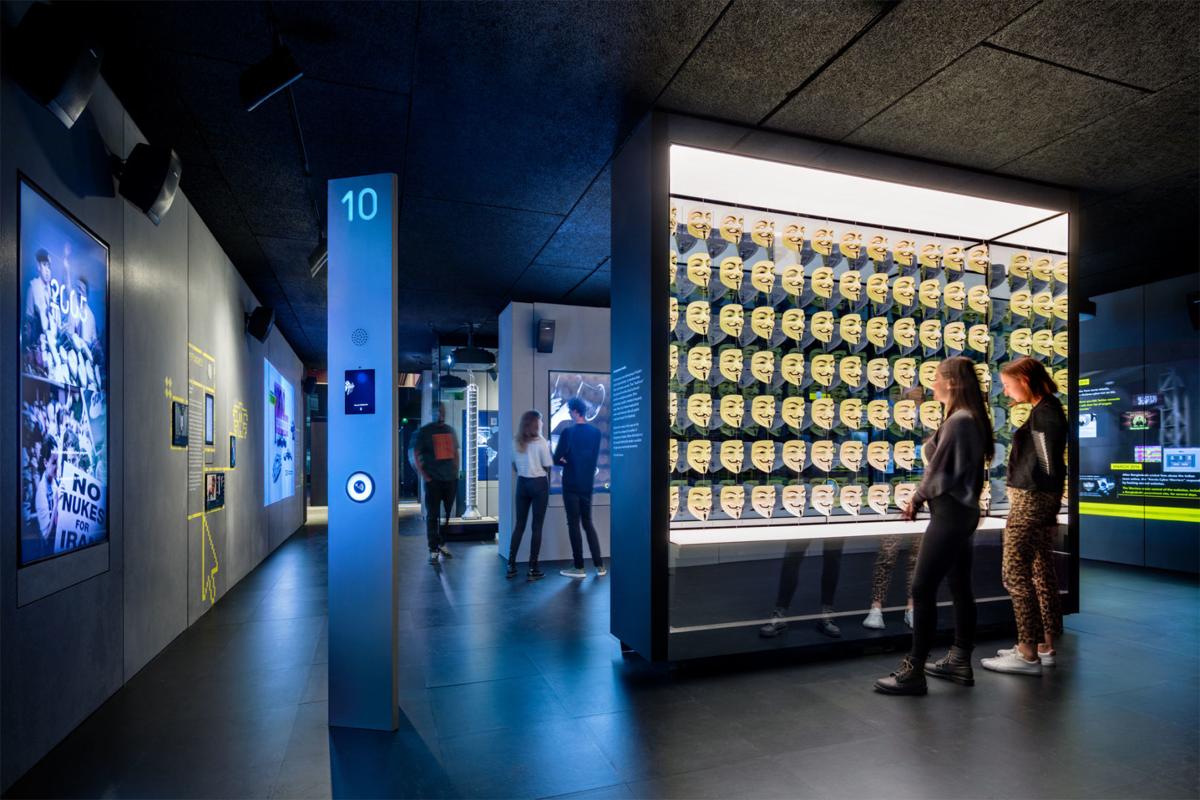 At Spyscape, visitors are immersed in the world of espionage, with galleries for hacking and six other aspects of spycraft. 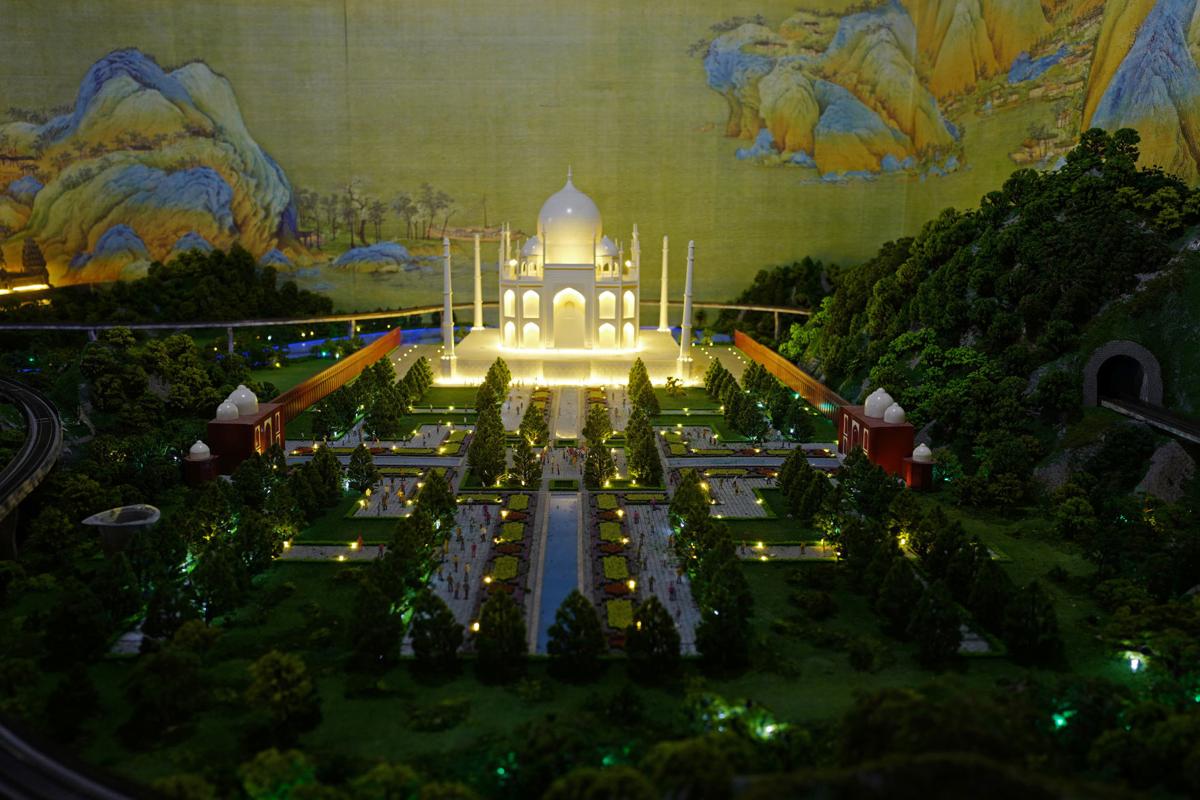 The Taj Mahal is one of the iconic sites from around the world represented at Gulliver’s Gate.

At NFL Experience Times Square, fans get in on a Super Bowl celebration.

A model of Grand Central Station at Gulliver's Gate, a new attraction in Times Square.

Visitors to National Geographic Encounter: Ocean Odyssey look at the sting rays swimming beneath their feet.

At Spyscape, visitors are immersed in the world of espionage, with galleries for hacking and six other aspects of spycraft.

The Taj Mahal is one of the iconic sites from around the world represented at Gulliver’s Gate.

Just when you thought Times Square had it all—monster LED billboards, Broadway shows, roaming cartoon mascots, a grown man crooning in his underwear—four new themed attractions have opened near Manhattan’s main tourist drag, all vying for your attention, selfies and dollars.

While the Big Apple is known for its cultural landmarks—the Metropolitan Museum of Art, the Museum of Modern Art and the Whitney Museum of American Art, to name a few—these pricey newcomers hope to cash in on the city’s record numbers of visitors with immersive and interactive exhibits, engaging and educational virtual displays and, yes, loads of Instagrammable content.

But which, if any, are worth the cost of admission? I spent two afternoons crisscrossing midtown Manhattan to find out. Thankfully, all four sites are within a dozen blocks of each other and each takes two hours, at most, to explore.

It’s a small world after all — or at least it feels that way at Gulliver’s Gate, which bills itself as “the most technologically advanced and interactive museum of miniatures on the planet.” Inspired by Jonathan Swift’s “Gulliver’s Travels,” the whimsical wonderland includes 300 miniature displays of world landmarks and cities, scaled down to 1/87th of their true, towering size. I was mesmerized by the remarkable precision, care and artistry displayed by more than 600 model makers in molding this tiny, but expansive, 3-D universe.

The 50,000-square-foot exhibit space, which is divided by region, is a labor of love inspired by Israeli entrepreneur Eiran Gazit. It cost a whopping $40 million and took 10 years to complete. While professional model-makers from around the world were tapped to build their respective regions, a small team of in-house professionals maintains the displays and develops new components.

As I moved from room to room, I was transported from the icy-cold foothills of Sochi, Russia, to the sun-drenched pyramids of Egypt. While most displays are re-creations of historical events, such as the salute to the Stonewall Inn in the New York City section, others reflect current events, such as the miniature tribute to the March for Our Lives protest rally in Washington in March.

Along the way, visitors use a special souvenir key, which has an RFID sensor, to unlock and activate moving displays, including trains, planes, parades, carousels and even a tiny Loch Ness monster hidden in the depths of the Scottish Highlands. And Nessie’s not the only Easter egg in this high-tech, miniature mecca. Fun characters are sprinkled across the exhibit: Spider-Man hangs from the Brooklyn Bridge; the Beatles cruise along Abbey Road; and Santa Claus disappears into Scandinavia’s skies. Picture an interactive visual adventure, in the vein of “Where’s Waldo?” and the “I Spy” book series.

I regretted having to leave this Lilliputian world and return to life-size reality. Part of me wanted to leave a permanent mark on the attraction. For $44, I could have had a pint-size version of myself added to one of 20 scenes, thanks to a 3-D printer. The Ellis Island model is the most heavily populated by visitors’ mini-me creations, which have been plopped down steadily since the attraction opened last year.

The “Monday Night Football” jingle is playing on a loop in the lobby, pumping me up like a rookie before gametime. OK, ESPN, I’m ready for some football.

Opened last December by the National Football League, in partnership with Cirque du Soleil, this $40 million, 40,000-square-foot attraction isn’t a football museum so much as a tribute to the sports juggernaut and its 32 teams. Fans on the first floor flock to a sea of memorabilia, which includes jerseys, signs, helmets and some questionable fan headgear. (I’m looking at you, Buffalo Bills wing heads.) While the display text is mostly promotional and pithy, I did learn some things, such as the fact that the citizens of Green Bay, Wisconsin, have the only community-owned major professional team in the nation — the Packers. The fictional Rod Tidwell jersey in the Arizona Cardinals section — a tribute to the “Jerry Maguire” character — prompted me to whisper a quiet but impassioned “Show me the money!”

Farther on, I was ushered into a mammoth “4-D” theater. It felt even larger when I noticed that there were only two other thrill-seekers in the 185-seat cinema. Despite its billing as a “thrill-ride,” I found the 10-minute training film overhyped and underwhelming. Save for a special weather event at the close of the movie, which I won’t give away, the booming audios and jostling seats were unremarkable. After the film, we were escorted to the second level and invited to test our skills against virtual pros through drills that include blocking, passing and jumping challenges. If you’re like me and quickly discover you can’t throw a spiral to save your life, have no fear: You’ll still wind up at the Super Bowl. The last level is the champions’ floor, where you can ogle sparkly Super Bowl rings, experience a virtual Gatorade dunk (sans mess) with the help of visual effects and pose with a Lombardi Trophy replica.

On the way out, I was tempted to treat myself to a stadium snack, such as the Arizona Cardinals’ Pump Fake, a deep-fried Cap’n Crunch-coated burger topped with bacon bits, banana chips and caramel sauce. (The exhibit rotates different signature dishes from the 32 stadiums daily.) In the end, I decided to skip it. I didn’t want to ruin my new training camp body.

While fair-weather fans might do better saving their dollars for an in-person game, sports enthusiasts will enjoy this overpriced football fantasyland. It’s a lot like the country’s most popular sports league: loud, stimulating, engaging and, at times, a bit full of itself.

You can hang up your shell bikini for this underwater voyage. The virtual aquatic adventure makes a splash—but not a literal one—by bringing the sights, sounds and scenes of the ocean to life with cutting-edge technology, including 3-D animation, authentic soundscapes and video mapping.

I embraced my inner mermaid and took the plunge. A fluorescent blue escalator delivered me from the noisy streets of midtown to the hushed sands of the South Pacific, where I started my virtual journey, inching my way toward the California coast through 10 different undersea environments.

Visitors, especially young ones, will enjoy the site’s interactive elements, including the friendly, fluorescent sting rays that dart beneath your feet and the playful sea lions that respond to hand gestures. Floor-to-ceiling screens, touch-sensitive floors and 3-D imagery elevate the experience. Later rooms spotlight the more mysterious and rarely witnessed deep-sea fauna, including a mouthy duel between two Humboldt squids (which each have 24,000 razor-sharp teeth). Giggles erupted as our group bumped its way through the “kelp forest” mirror maze.

Housed in the former New York Times pressroom, the mission of this expansive and educational 60,000-square-foot exhibition is driven home in its finale. There, guests can participate in hands-on activities that encourage positive environmental practices. Visitors can also pledge to take different actions, large and small, to help preserve and protect the Earth and its inhabitants. I decided to do my part by avoiding plastic straws and using only environmentally friendly sunscreen. On my swim through the gift shop, I hoped to follow through on my promise with a purchase. Sadly, it didn’t carry sunscreen, although it did have a mountain of $18.99 plush sea creatures. Maybe, by my next visit to the ocean depths, it will.

Have you ever wondered whether you missed your true calling as a spy? Maybe you grew up on the James Bond series, or “Harriet the Spy.”

Whatever international intrigue or clandestine forces bring you to Spyscape, it’s highly unlikely that you will leave this state-of-the-art interactive museum disappointed. The 60,000-square-foot labyrinth was thoughtfully designed by David Adjaye, the architect of the National Museum of African American History and Culture, and is divided into seven galleries: deception, encryption, surveillance, hacking, intelligence, cyberwarfare and special ops.

Along the way, visitors scan their ID bracelets at silver kiosks dotted throughout the three-level pavilion. The kiosks assess your personality traits, risk tolerance and IQ through a series of interactive games, tests and questionnaires to determine your spy profile. (There are 10 possibilities, including cryptologist and hacker, intelligence analyst and spycatcher.) Physical challenges, which include monitoring CCTV footage and taking a lie-detector test, also help determine the role that best suits your skills. I was secretly hoping to be labeled a spymaster so I could join the ranks of my favorite pop-culture sleuths: Sydney Bristow, Carrie Mathison and Kim Possible.

A running timeline highlights real-life espionage trailblazers, starting with World War II codebreakers such as Alan Turing and ending with “white-hat hackers” who find and fix computer flaws or vulnerabilities. I hit my stride during the agility-testing special ops challenge, which involves ducking, darting and diving under a web of neon-green laser beams. The test left me out of breath, but wanting more. The attendant, who couldn’t help but laugh at my determination to excel, let me attempt it three times.

In the last chamber, I scanned my wristband one final time, and a robot revealed my dossier. Based on the assessments and my key spy qualities—determination, empathy and having a “team player” mentality—I was predestined to be an intelligence operative. It’s not as sexy sounding as “spymaster,” but I’m happy to be a spy nonetheless.