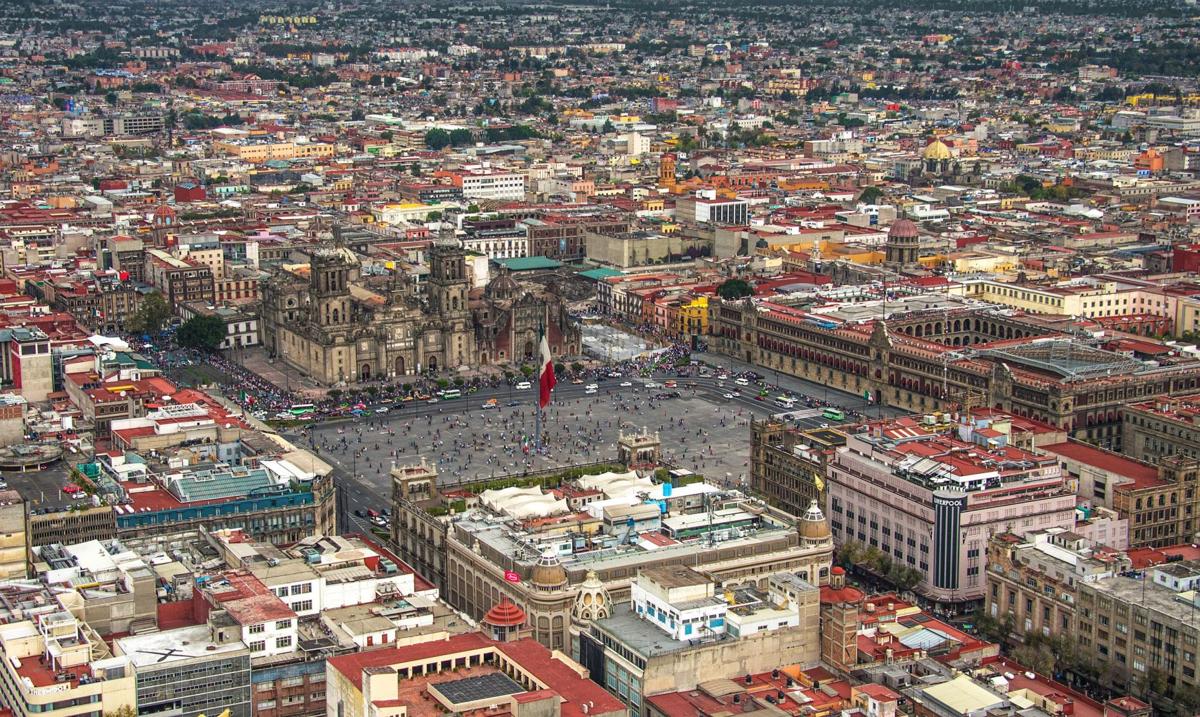 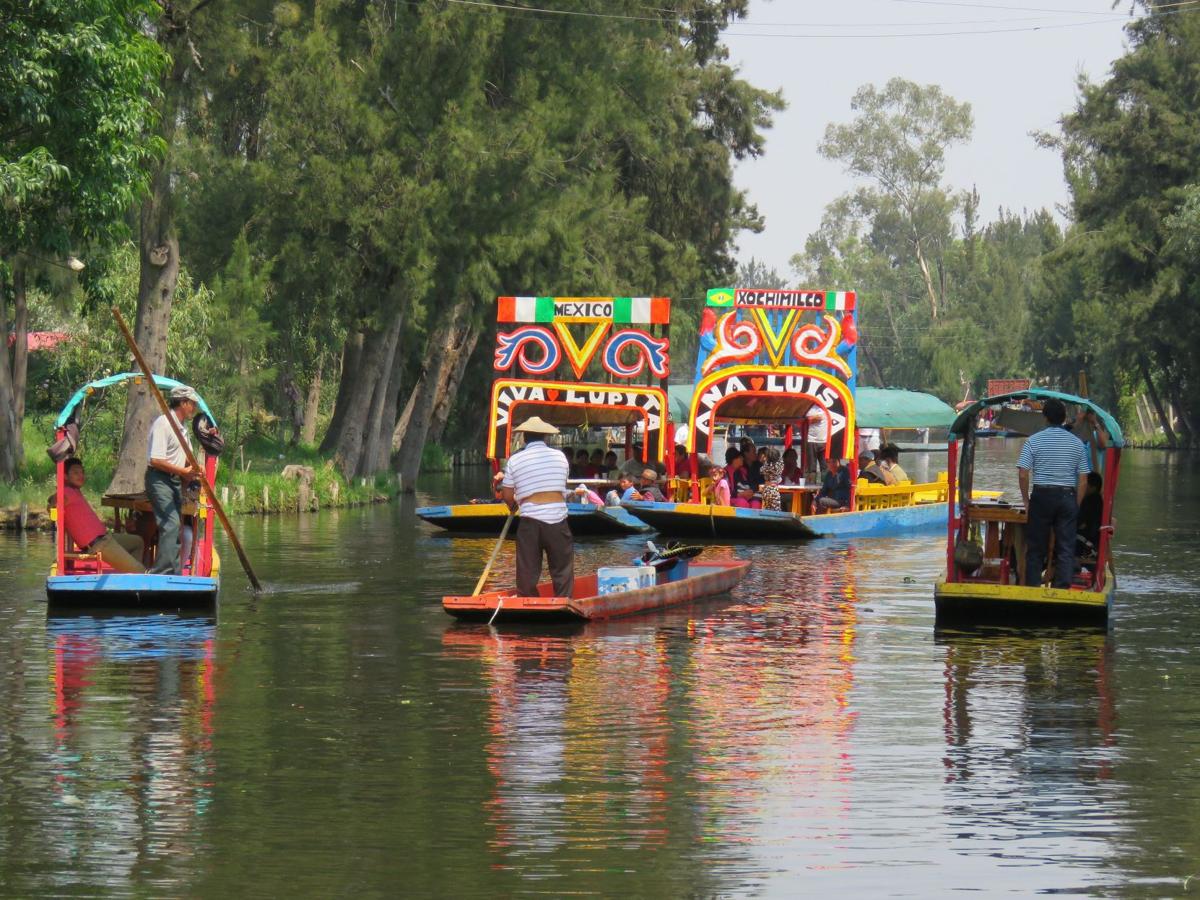 Xochimilco, a suburb of Mexico City, has a network of canals. 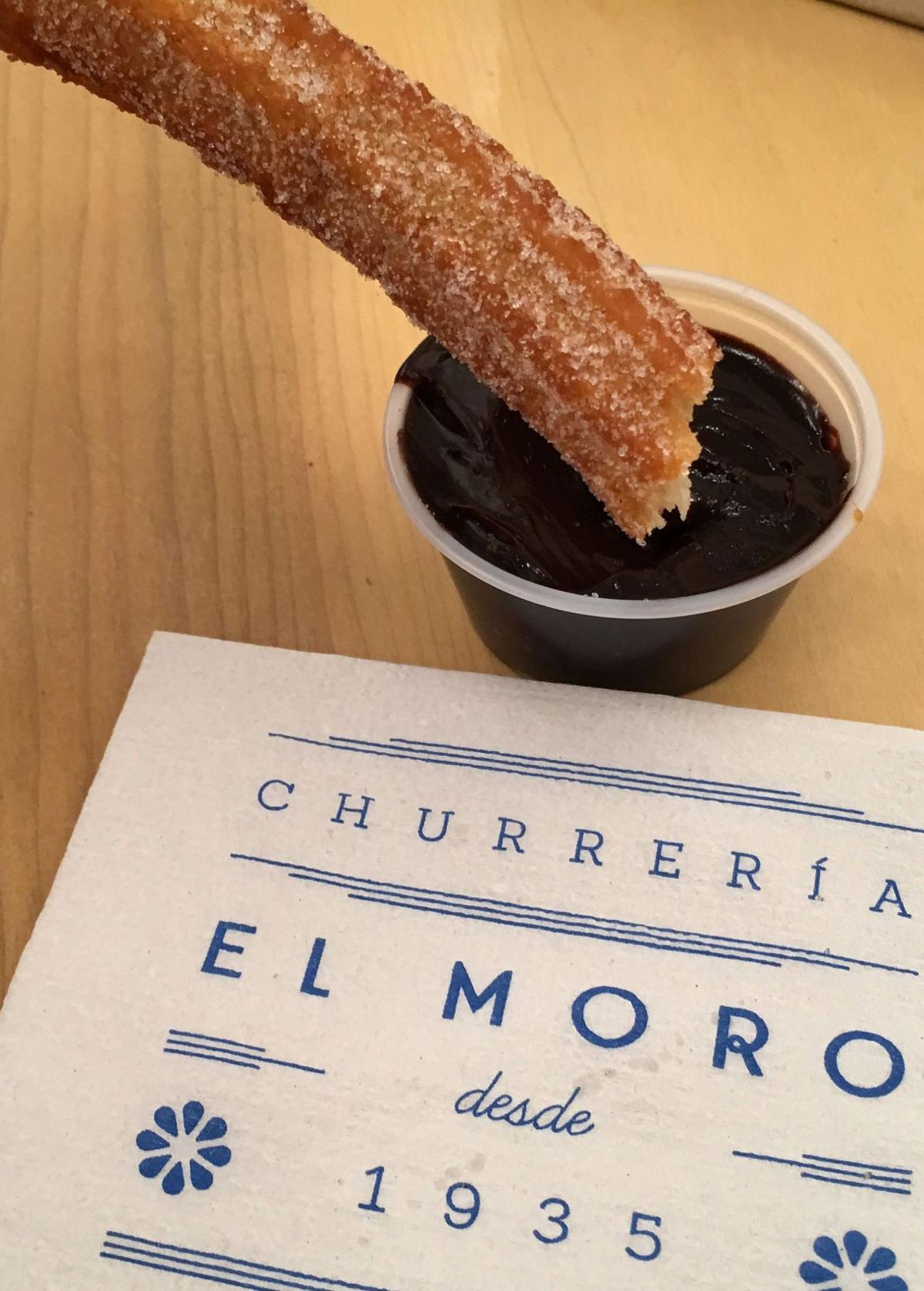 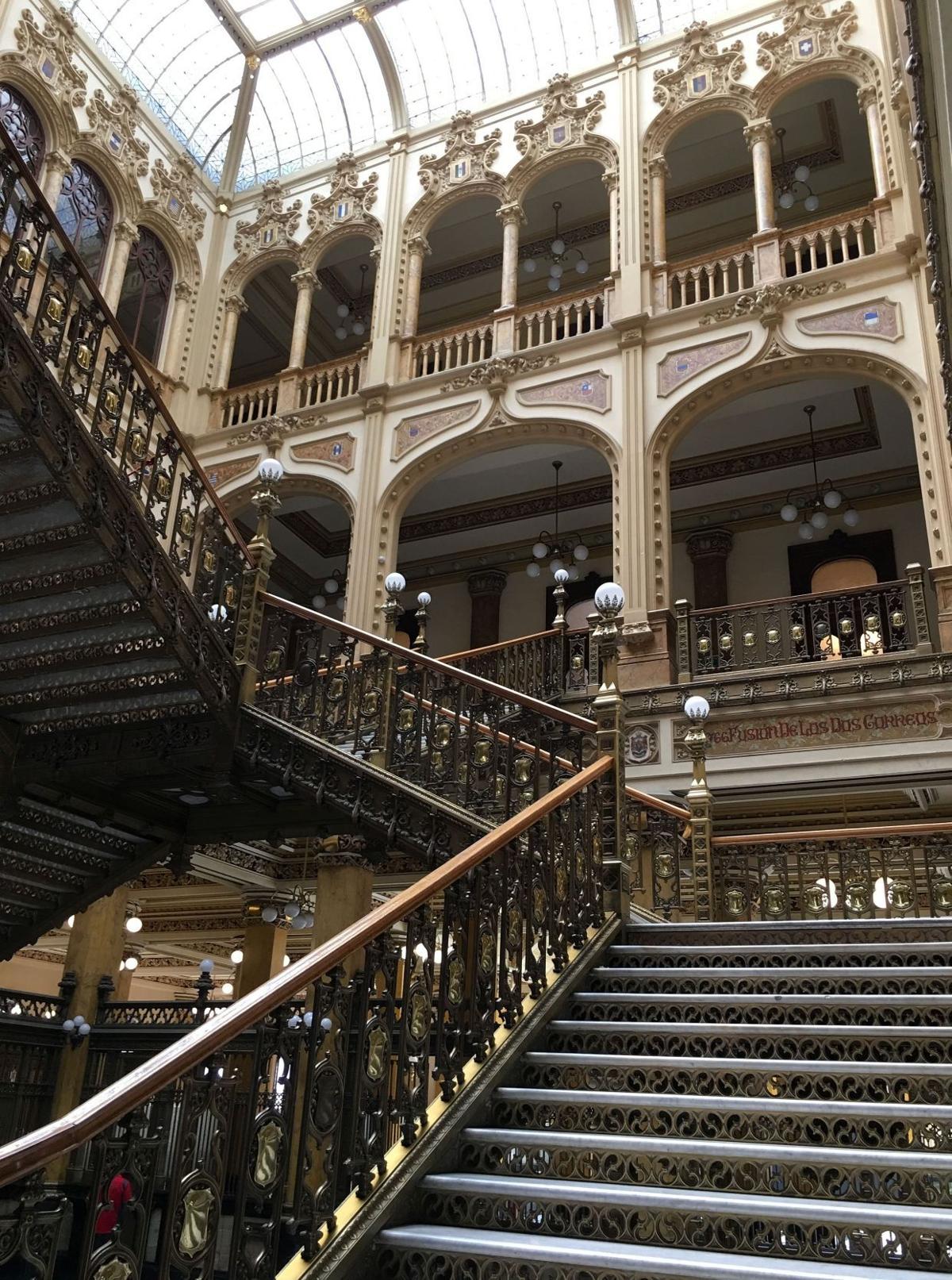 The Palacio de Correos (post office) was built in 1907. 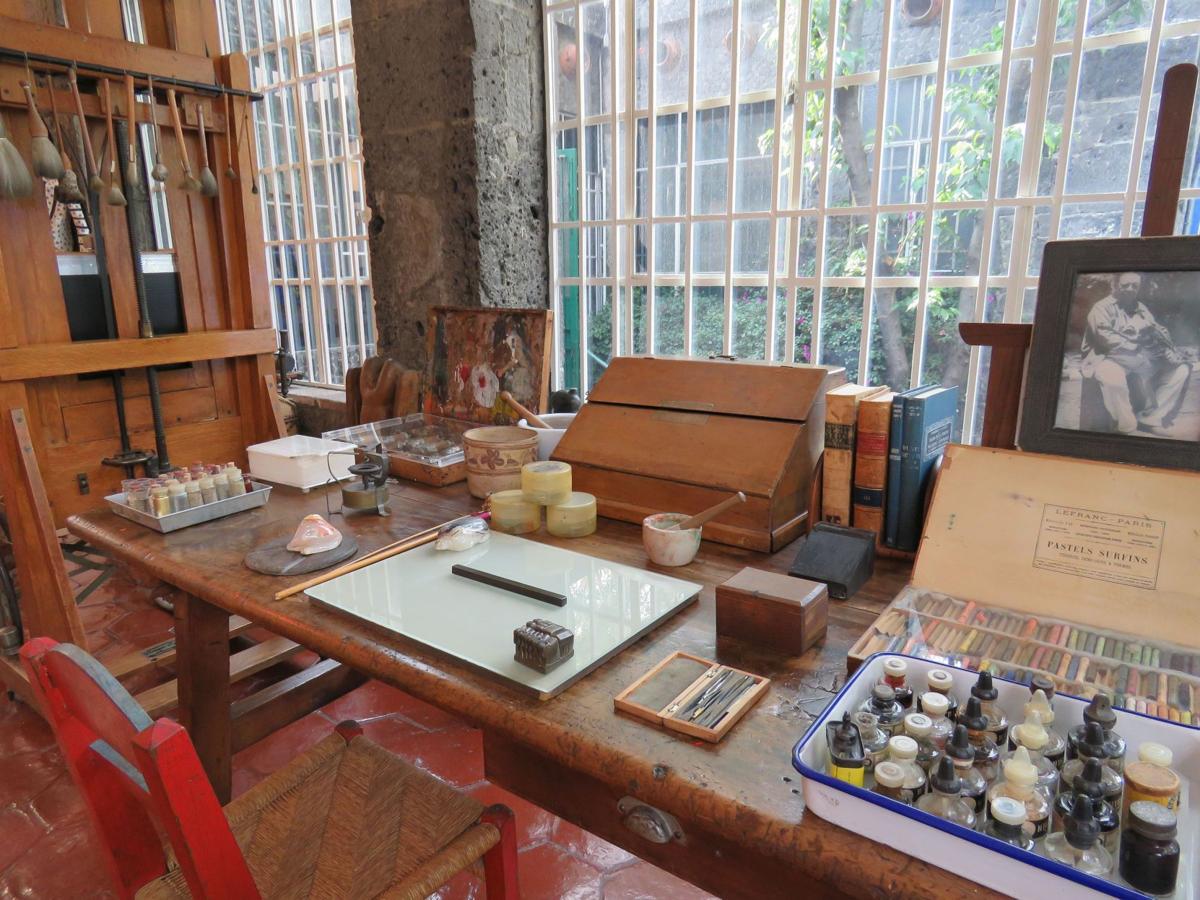 Mexican artist Frida Kahlo's colorful studio can be visited at La Casa Azul in the suburb of Coyoacán. 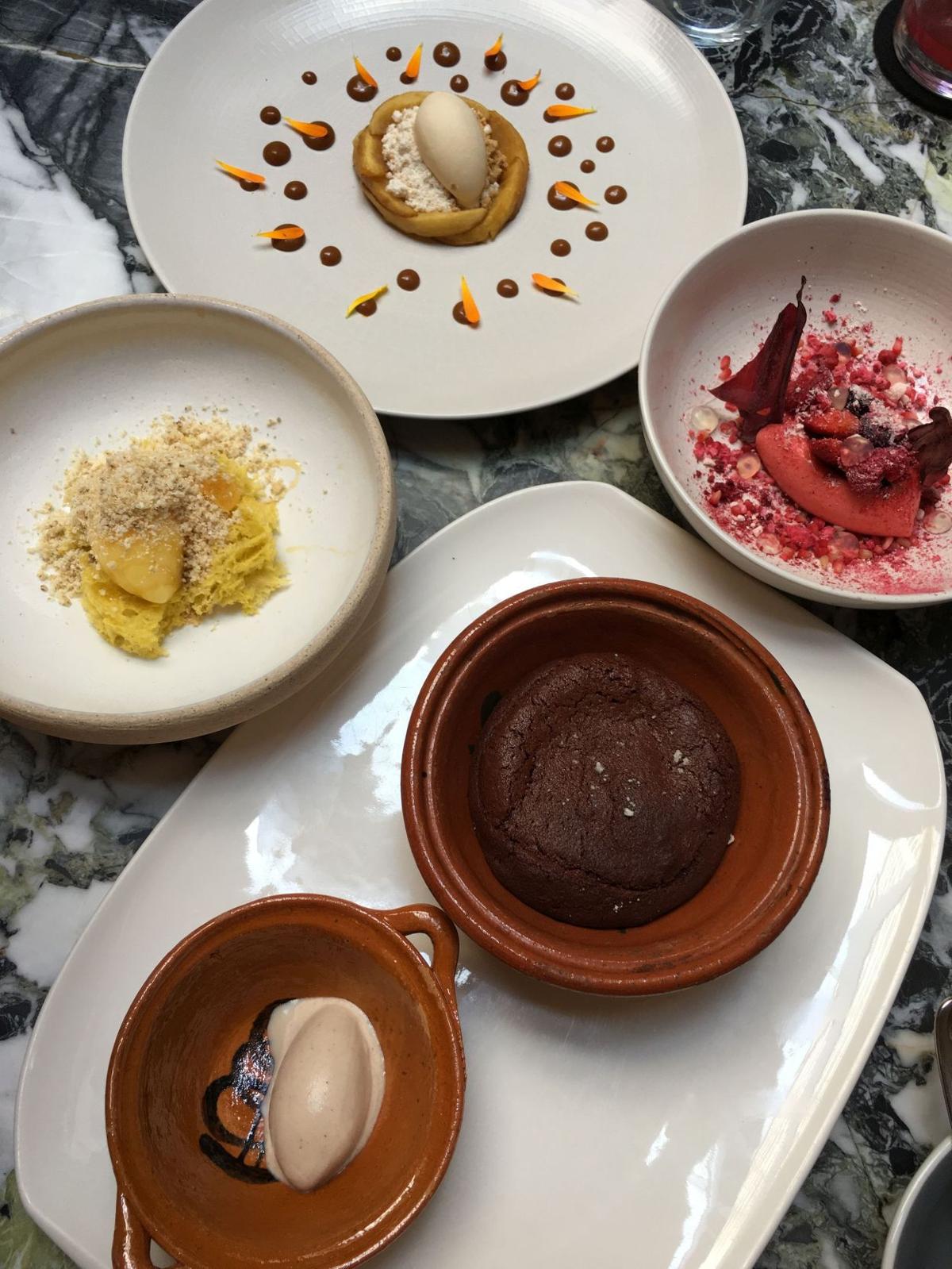 Jorge Vallejo is the chef and owner of Quintonil restaurant.

At first sight, the bustling Zócalo, Mexico City’s main public square is hard to take in. Figuring where to look first can be a challenge.

One of the largest squares in the world, it’s surrounded by a number of eye-catching and symbolic sites. There’s the massive Metropolitan Cathedral, whose construction spanned three centuries, and the Palacio Nacional, home to the offices of the president of Mexico and murals by renowned artist Diego Rivera. Aztec ruins lie underground the entire stretch, but between the palace and cathedral, one can walk among a section of unearthed remnants for the modern world to appreciate.

Sometimes also referred to as Constitution Square, the Zócalo, much like the rest of a massive city, seems in a constant state of controlled chaos. For a first-time visitor, initial hours on the ground may seem intimidating, but after a little bit of wandering, Mexico City has a way of getting under your skin.

Unlike a majority of Mexico’s popular tourist destinations, there’s no beach here. It’s not about drinking cervezas in the sand and perfecting your sunburn. People live and work here. Millions of people. Life is real, not resort driven.

Leave the square, and make your way down Francisco I. Madero Street. Depending on the day of the week and time of day, you could have it practically to yourself, or get caught in the ebb and flow of crowds.

Uniform clad street musicians called organilleros have a tendency to plant themselves in the center pedestrian passage so as to demonstrate to all passersby how they work to make the hand-cranked organ churn out Mexican melodies, while also managing to balance it on a waist-high peg leg.

Name brand, automatically recognizable storefronts that dot the street give it a sense of familiarity, but unknowns mixed in between remind you it is not home.

Whether it’s sitting down to a meal at a fancy restaurant or grabbing street food, menus tend to have their roots in tradition. At Quintonil, owner and chef Jorge Vallejo grew up cooking with his grandmother. At Dulce Patria, located in the trendy Las Alacobas hotel (the same brand behind the new Las Alcobas Napa Valley in St. Helena) every drink and entrée is a work of art. Crafted cocktails like margaritas and dishes like seafood and lobster pozole don’t just taste good, they are photo worthy.

Though eating may be determined by a number of factors: budget, reservations, and sheer location when hunger strikes, indulging in churros during a stay in Mexico City, preferably with chocolate, should be given priority. Available throughout the city, Churreria El Moro, must be doing something right. Founded in 1935, five locations makes it easy to give into a sweet tooth. Do it right and order the Español hot chocolate. It might as well be a melted chocolate bar in a cup.

Even if you’re the type that thrives on hustle and bustle, some of the best tastes of Mexico City can be found in its suburbs. Located in southern Mexico City, Xochimilco and its network of ancient canals provide a strikingly different view of city life. Hundreds of colorful trajineras, wide gondola-like boats, propelled manually by captains using a long wooden stick, cruise the canals.

There’s no need to bring anything other than yourself. Vendors float alongside trajineras, selling everything from trinkets, to beer and corn on the cob slathered in mayonnaise and spices. Mariachi bands have mastered the art of commanding a floating stage. When hired to perform, they jump ship, leaving their boat to board trajineras for a personalized performance. Though weekdays tend to be dominated by visitors afloat, locals invade on weekends.

When back on solid ground, head for cobblestone clad Coyoacán. Complete with organilleros, it offers a more tranquil setting to stroll than the city’s historic center and the opportunity to visit La Casa Azul, the former home of Mexican artist Frida Kahlo and husband Diego Rivera. There are a select number of works by the famous pair on display, but it’s the personal items on display that resonate with many visitors. Be sure not to miss the bright kitchen and Kahlo’s colorful studio.

In a city loaded with postcard worthy scenery, take a moment to remember the art of snail mail with a visit to the Palacio de Correos, in Mexico City’s historic district. Built in 1907, this post office will inspire you to put away your phone and send more postcards. It’s even open on Sundays.

To Mike Anger in Midland, Michigan, a $100 round-trip airline flight and $260 for five nights at a Las Vegas hotel made it too easy to say yes.

Cabin fever got you down? You’re not alone.

Start Booking Your Trips Backward: Get Your Rental Car First

Most travelers start vacation planning by scouring the internet for a great flight deal. Then, it’s time to scout out hotels. Booking the rental car is a boring afterthought. But…

It's known as the “Mother Road” of the U.S. Here's a list of 50 Route 66 attractions for any traveler looking to make the eight-state road trip.

One of Joe Seo’s goals as an actor has been to portray well-rounded characters that aren’t Asian stereotypes. Born and raised in California, Seo said one of the reasons he loves his role as Kyler – the school bully who’s a wrestler, not a martial arts expert – on “Cobra Kai,” is because it’s such a different role for an Asian American man. “It goes against the grain of the way Asians are portrayed,” he said from Atlanta, where he was working. “I jumped at this opportunity and thank the producers for trying to push the envelope.” The winner of Sundance’s Dramatic Special Jury Award for Breakthrough Performance for his portrayal of a gay teenager in "Spa Night," Seo recently was a guest speaker at Georgia Tech, where he talked about Asian American representation in the media. Fans may interact with him on Instagram (https://www.instagram.com/joejoeseo/) and Twitter (https://twitter.com/Seonoopy).

Taking the kids: Let's hear it for Moms

Let’s hear it for moms!

Ed Perkins on Travel: Summer 2021: What's up with airlines?

"May you live in interesting times" is an ancient Chinese curse probably composed by an English gentleman in maybe 1898. Regardless of the quip's provenance, today is certainly "interesting times" for the airline business. As you plan your increasingly likely summer or fall trip, you need to take heed of a few key developments.

Traveling to Daytona Beach in search of history and architecture

Many tourist destinations get pigeon-holed into a reputation and never seem to dig their way out. The first thing one might think when the Florida town of Daytona Beach is mentioned might be auto racing and raucous spring breaks. However, the city has much more to offer, including its rich history and hidden architectural gems. Daytona’s oldest continuously operating hotel, The Clarendon Hotel ...

Xochimilco, a suburb of Mexico City, has a network of canals.

The Palacio de Correos (post office) was built in 1907.

Mexican artist Frida Kahlo's colorful studio can be visited at La Casa Azul in the suburb of Coyoacán.

Jorge Vallejo is the chef and owner of Quintonil restaurant.