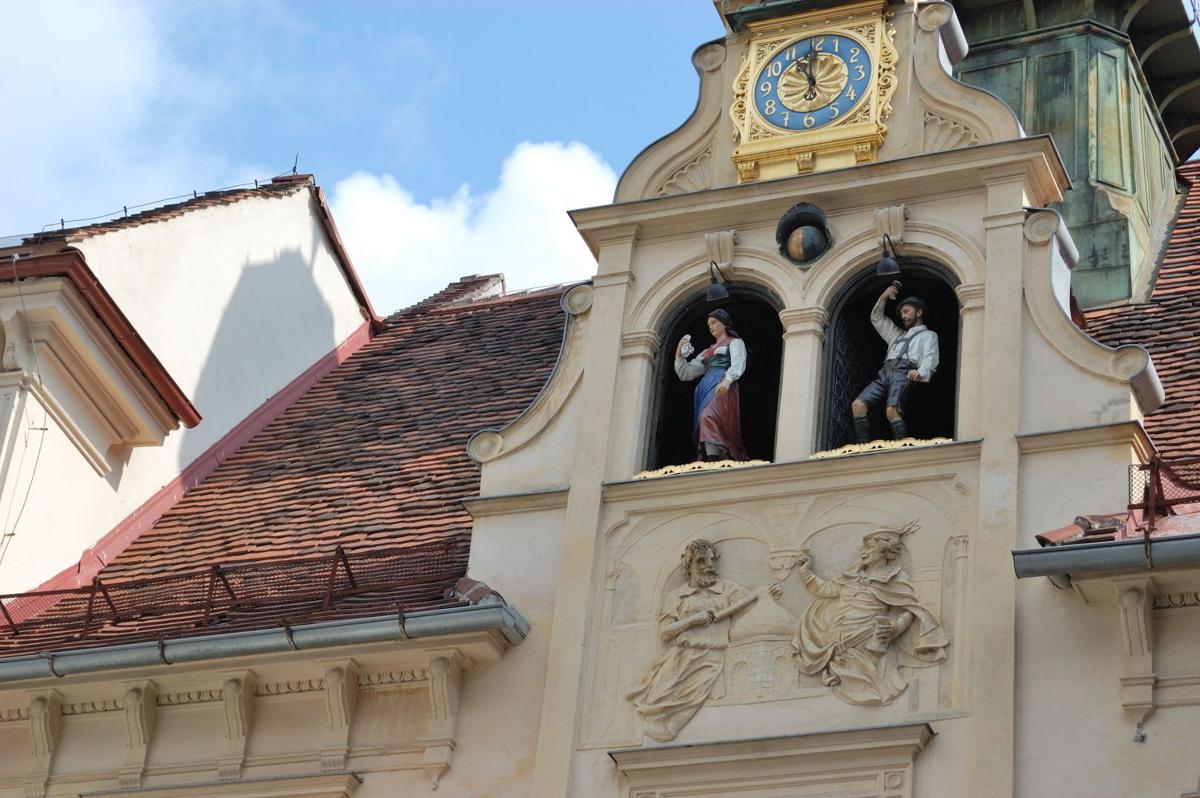 The wooden figures dance above the Glockenspielplatz in Graz, Austria. 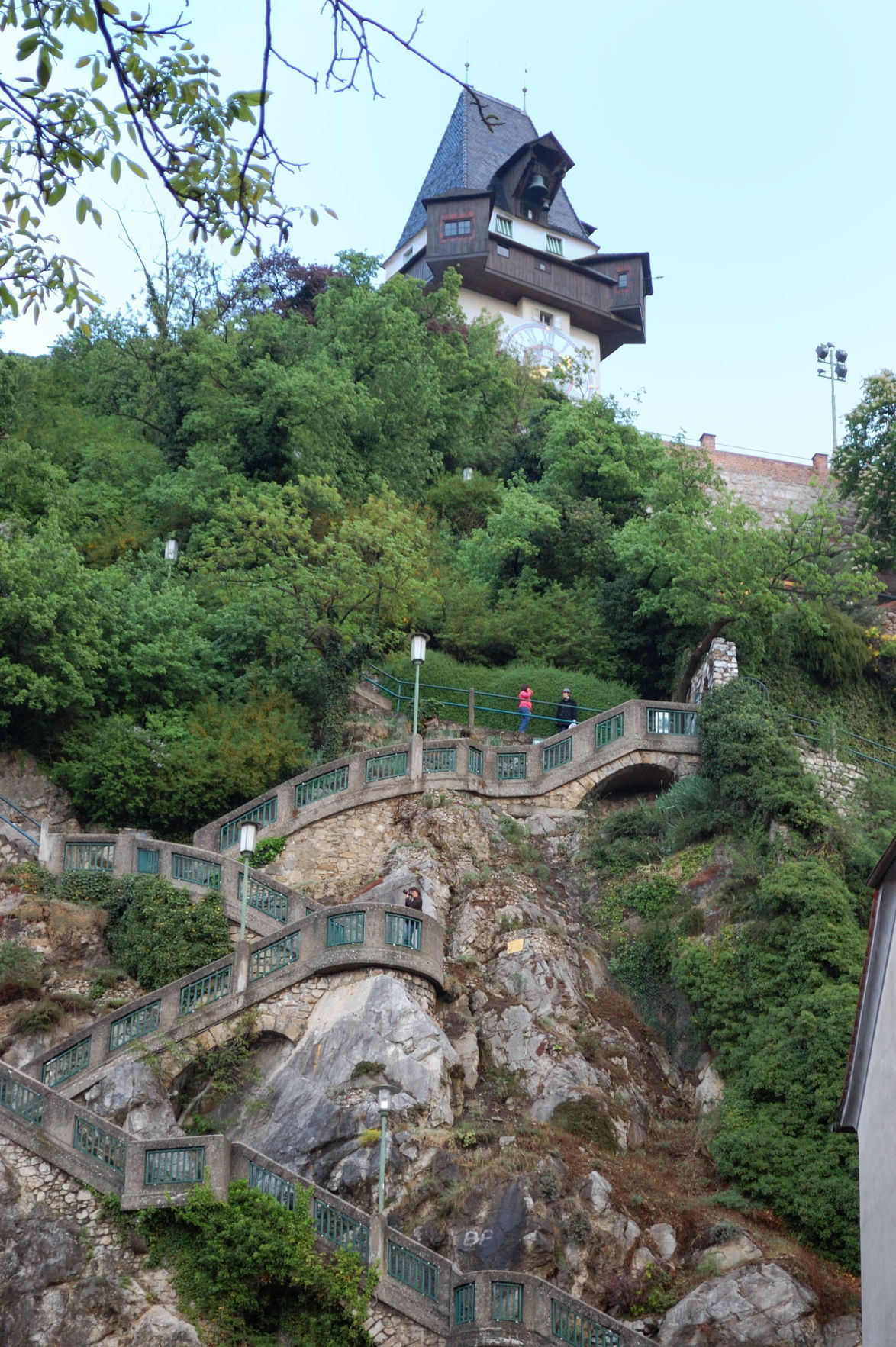 Steps lead up to the clock tower in Graz, Austria. 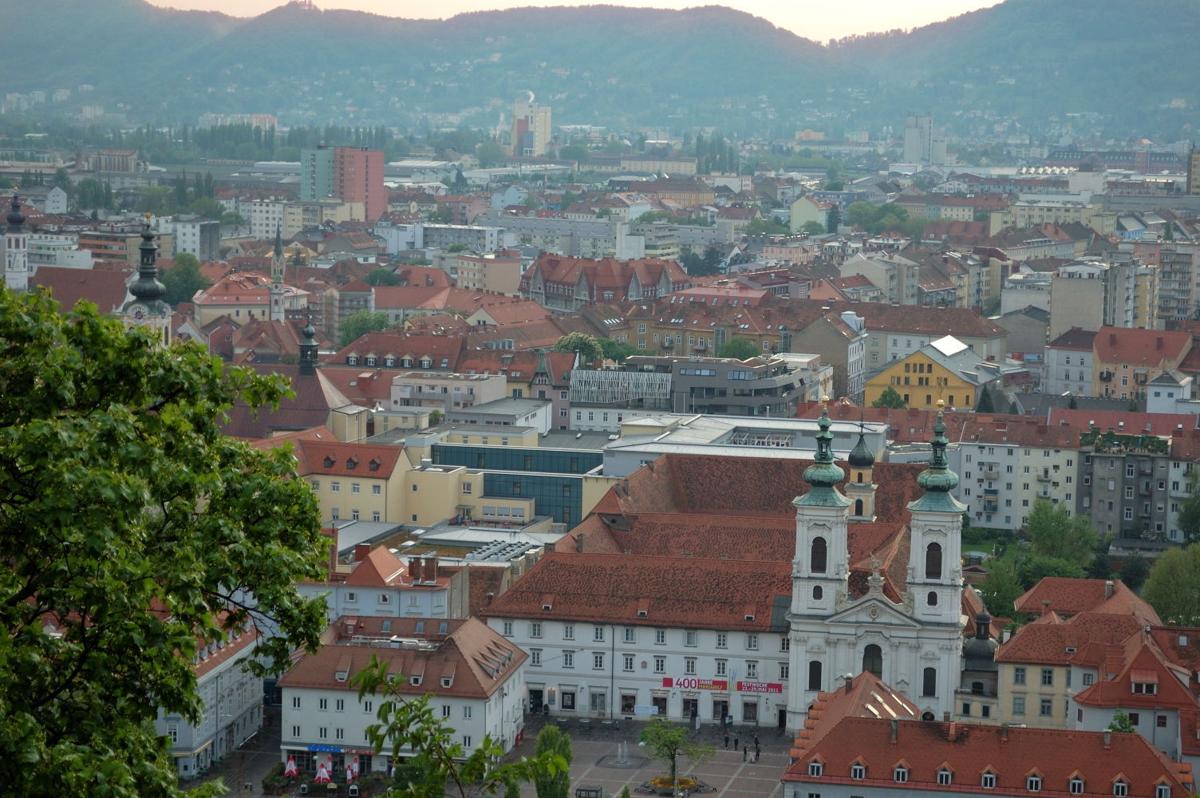 The old town of Graz as seen from the Schlossberg. 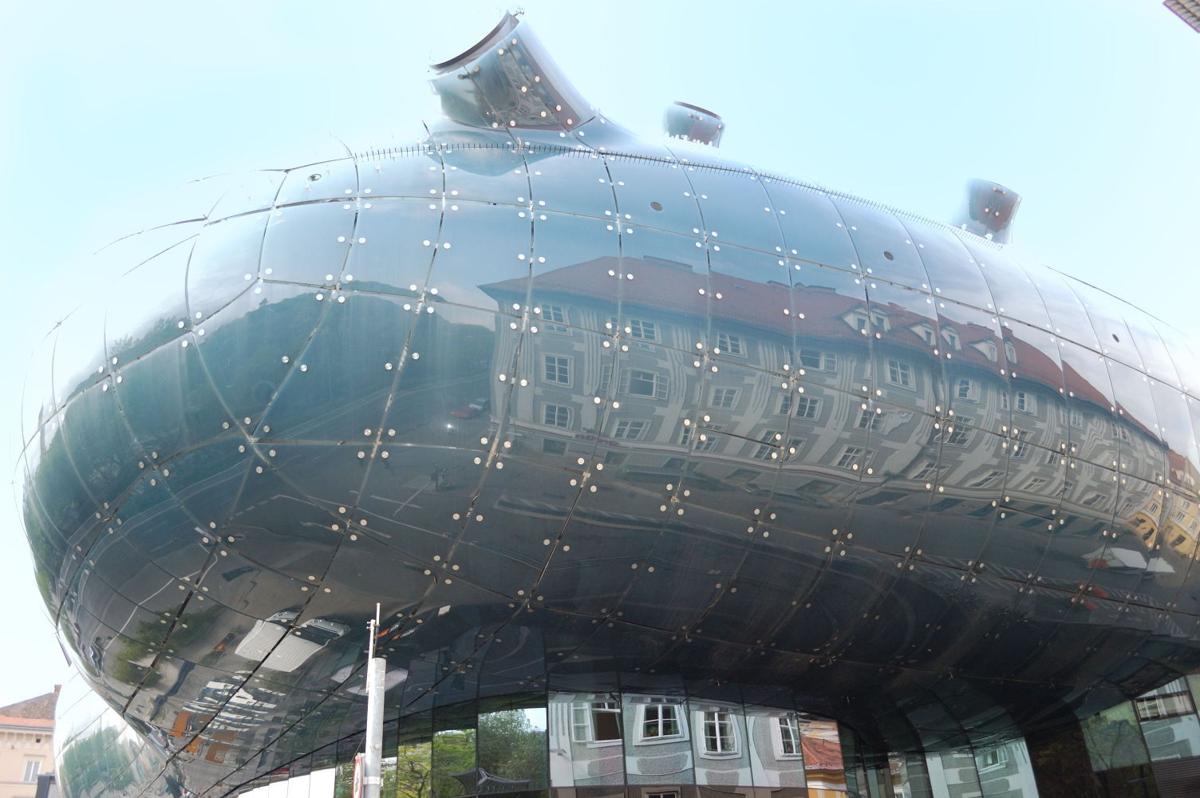 I had spent Easter weekend in Salzburg, Austria, where the charming old part of town inhabited by tourists had functioned as if there were no holiday.

The train station displayed a holiday spirit, however — there were young men in lederhosen everywhere. I wanted to ride the train from Salzburg to Graz for a quick stop on my way to Vienna. Traveling by myself, I had decided to visit this southern Austrian city in Styria near Croatia.

As I waited on the platform, holding my luggage, I managed to get my shoulder bag caught on something. Two burly local fellows offered to help, then asked in fractured English where I was from. I responded “California,” and they burst into huge smiles, proudly reminding me that Arnold Schwarzenegger is from Styria.

The train arrived and I settled into the cozy first-class car for the four-hour ride to Graz. Only one other traveler occupied the car, a slim, dark-haired fellow who was immersed in his laptop. I brought back a salad from the food car and munched away as gorgeous scenery passed by: snow-capped mountains, forested hills, villages, a river. I even spotted a castle at the top of a peak. What fun it is to ride the rails!

Two hours into the trip, a conductor passed through and explained that, due to an obstruction on the tracks ahead, we would disembark at the Trieven station at 2:40. A bus would take us around the obstruction to another station, where a different train would take us to Graz. “Just follow me when we get to the station,” he said.

I started gathering my things a few minutes in advance, as moving my suitcase down the aisle took time. At 2:40 the train came to a stop, and my fellow passenger joined me at the exit. Just to be sure, I asked him, “This is where we get the bus?”

“Yes,” he answered with a smile and lifted my bag down onto the platform. I didn’t see the conductor. The next thing I knew, the train was pulling away. We had debarked too soon. The two of us were at an empty station in a tiny town. Another man arrived, and my companion launched into a German conversation, while I looked at the schedule on the wall. We would have to wait two hours for the next train.

“I can’t do that,” the Austrian said. “I can’t believe I made this mistake. I must get back to Graz.” He was embarrassed that he had misled me. Returning from a visit with his mother in Salzburg, he had many things to do at home before returning to work the next day. He introduced himself as Gerhard.

Gerhard called for a taxi, which we could take to the station to reboard the train. I offered to share the cost. Gerhard announced that the taxi would arrive in 20 minutes. I couldn’t imagine how we could possibly catch the train, but Gerhard insisted that we’d make other connections and would still arrive in Graz earlier than if we stayed put. I didn’t want to spend two hours sitting alone in the station, so when the taxi arrived after a half-hour, I jumped in.

As we pulled away, a queasy sensation in my stomach told me I was taking a risk. Gerhard was tall and wiry, clean-shaven, an attractive man in his late 40s. I made a comment about following “strange men” off trains, and Gerhard quipped back, “not so strange.”

The taxi ride took 20 minutes, and the fare was about $75 U.S. I didn’t have the right change to pay my half, but Gerhard told me to forget it for the moment. A train arrived and we got on. I announced, “I’m not letting you out of my sight!”

For the next couple of hours, we changed trains numerous times, with Gerhard carrying my bag on and off trains, and up and down stairs. I was thankful that my Eurail pass allowed me to take as many trains as I wanted. He had a book of tickets.

On the longest segment, we sat in a compartment with a British fellow and chatted about world affairs. Gerhard is a business manager who has lived in Australia and Paris and visits the U.S. occasionally.

We talked about American politics, French business attitudes, and demanding jobs that don’t leave time for having a life. Gerhard enjoyed my stories about my years as a school principal. He said, “You know it’s all right that we’ve had this problem with the train, because this is fun!”

Gerhard suggested I climb the hill to the castle in Graz for a grand view of the city. He told me that a few weeks earlier construction workers had found a World War I bomb buried at the railroad station. They had exploded it, breaking windows around town and closing the station for the day.

We arrived in Graz at 5:30. Gerhard apologized for not having time to show me around. I gave him the 15 euros I had toward the cab fare and he was happy with that. We exchanged business cards and he put me in a taxi, giving directions in German to the driver to get me safely to my hotel.

I spent the evening walking around the deserted city, dining on my feet at a hot dog stand, the only thing open. I skipped the stairs built into the cliff by prisoners of war during World War I and took an elevator up to the top of the Schlossberg for great views of the city. I walked by the closed kunsthaus, the art museum that looks like a spaceship.

In the morning, I had time to walk to Glockenspielplatz to see the charming wooden figures dance.

When it was time to check out of the hotel, I asked for a taxi. But when I told the driver I wanted to go to the train station, he started babbling in German. I redirected this to the desk clerk who explained that there was another bomb scare at the station. Gerhard’s story kept me from panicking.

I waited in the lobby until the station reopened, then continued my journey, with fond memories of my little adventure and my new Austrian friend.

To Mike Anger in Midland, Michigan, a $100 round-trip airline flight and $260 for five nights at a Las Vegas hotel made it too easy to say yes.

Cabin fever got you down? You’re not alone.

Traveling to Daytona Beach in search of history and architecture

Many tourist destinations get pigeon-holed into a reputation and never seem to dig their way out. The first thing one might think when the Florida town of Daytona Beach is mentioned might be auto racing and raucous spring breaks. However, the city has much more to offer, including its rich history and hidden architectural gems. Daytona’s oldest continuously operating hotel, The Clarendon Hotel ...

The wooden figures dance above the Glockenspielplatz in Graz, Austria.

Steps lead up to the clock tower in Graz, Austria.

The old town of Graz as seen from the Schlossberg.