Once a busy trade route, the Upper Rhine now offers history without crowds
Share this
{{featured_button_text}}
1 of 5 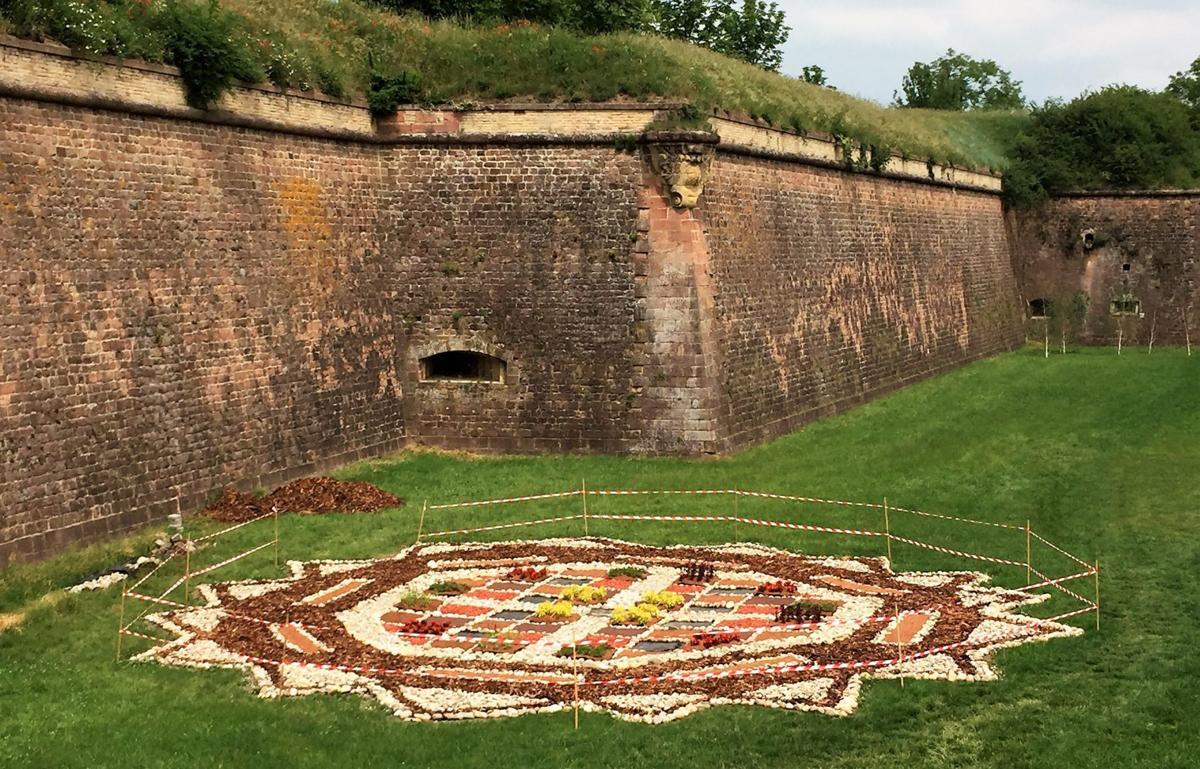 Outside the walls of the fortified city of Neuf-Brisach, France, with a design of the octagon-shaped city laid out in the grass. 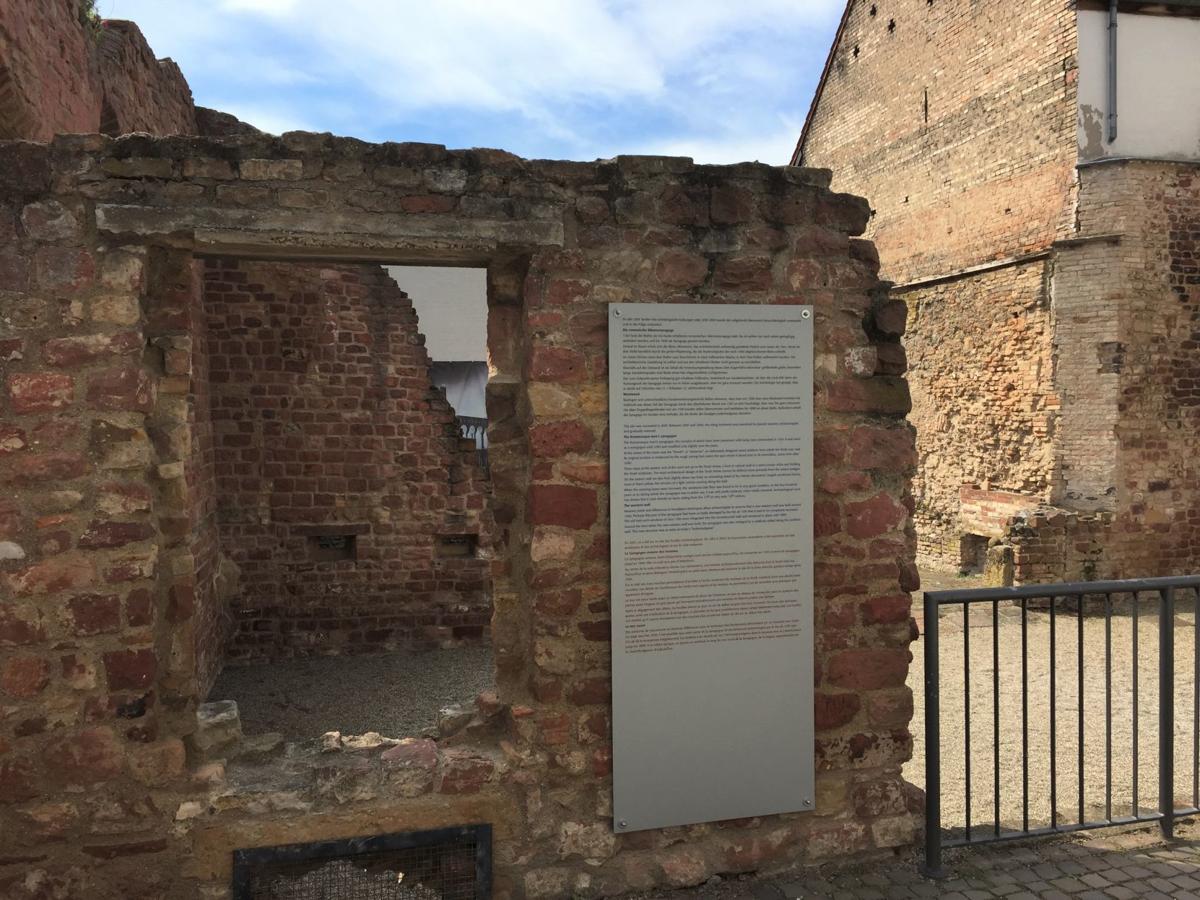 Ruins of the Jewish Synagogue in Speyer, Germany, inaugurated in 1104 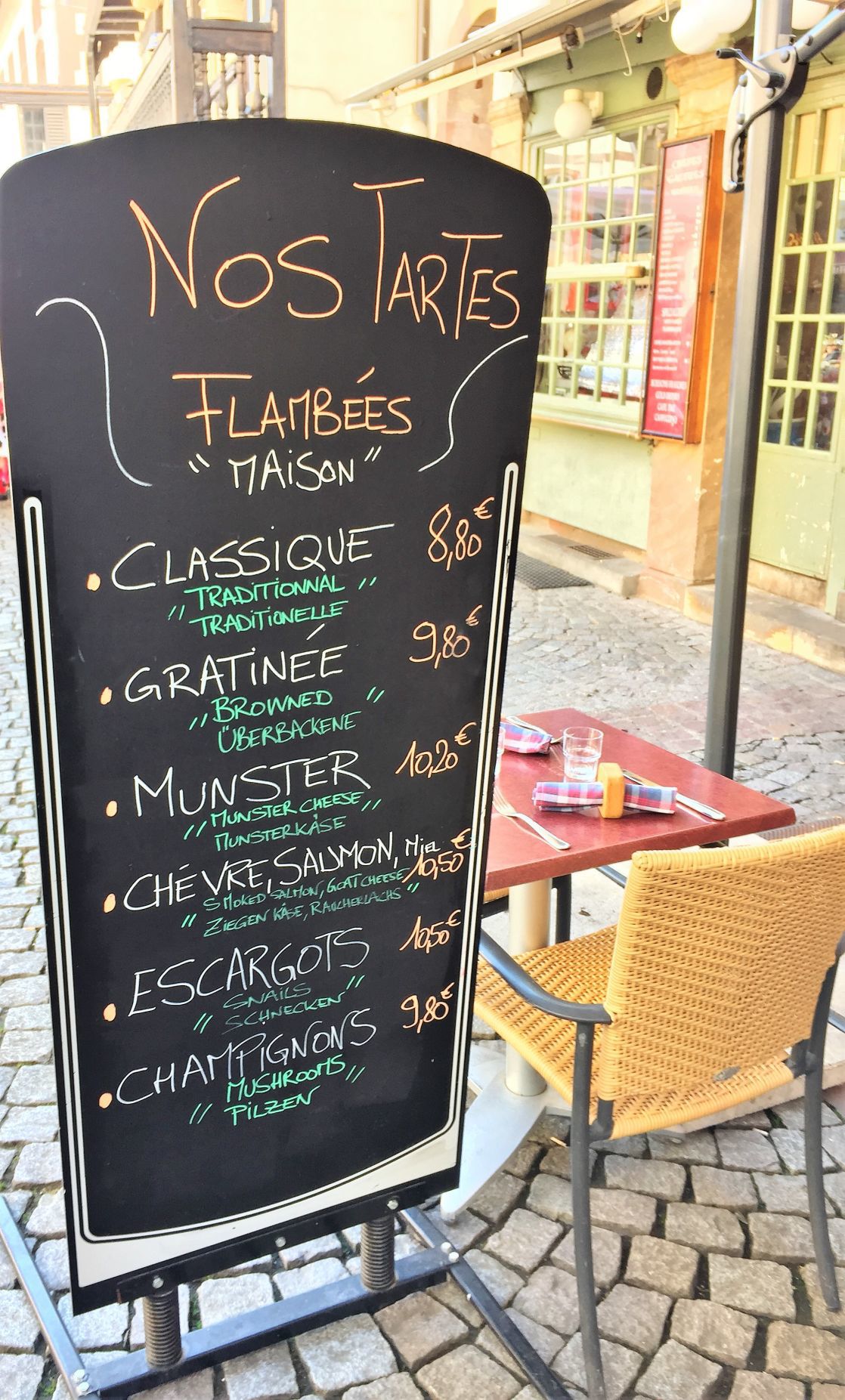 Lunch board in Strasbourg, France, lists specialties baked in flames. 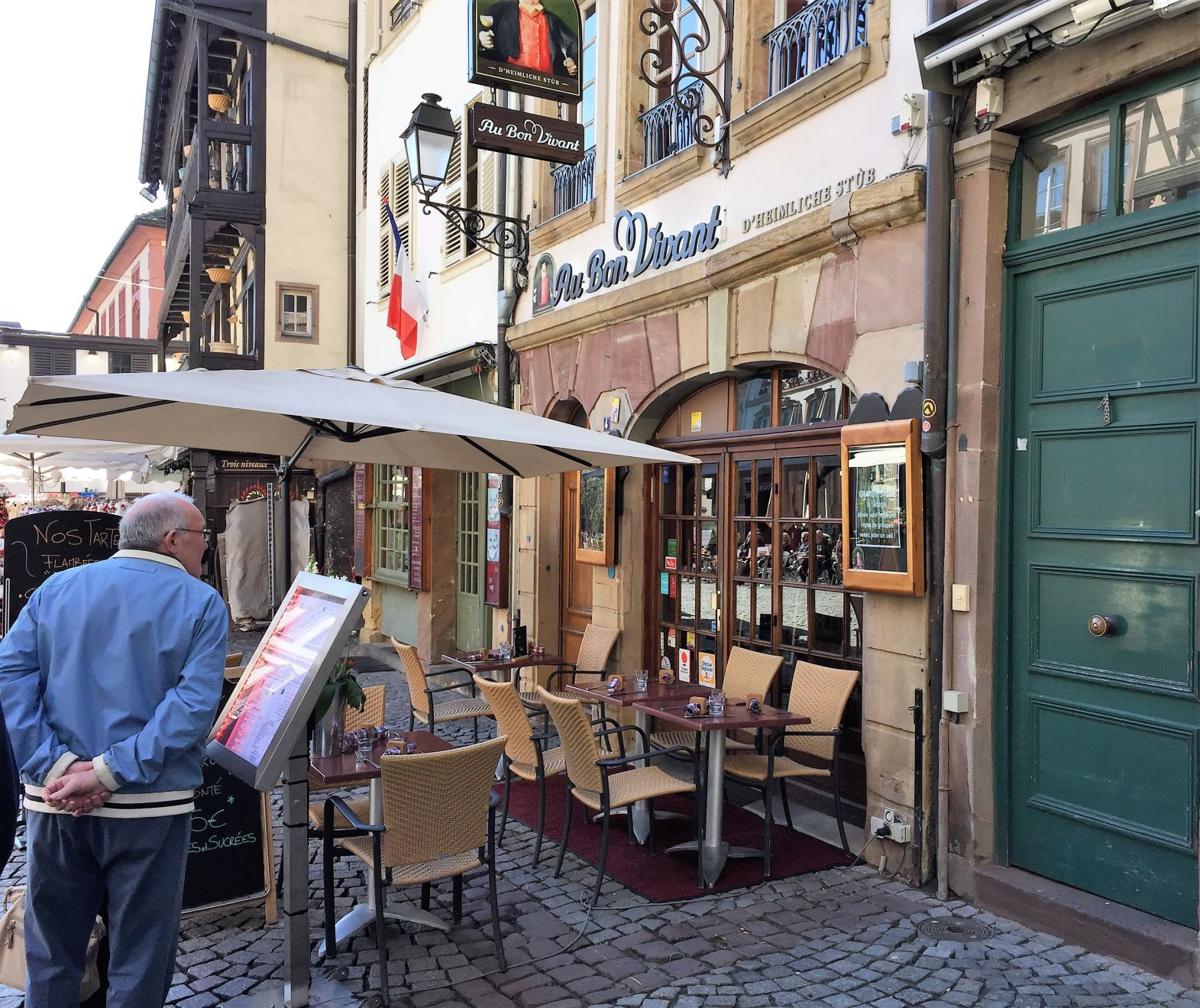 Choices for lunch in Strasbourg, France. 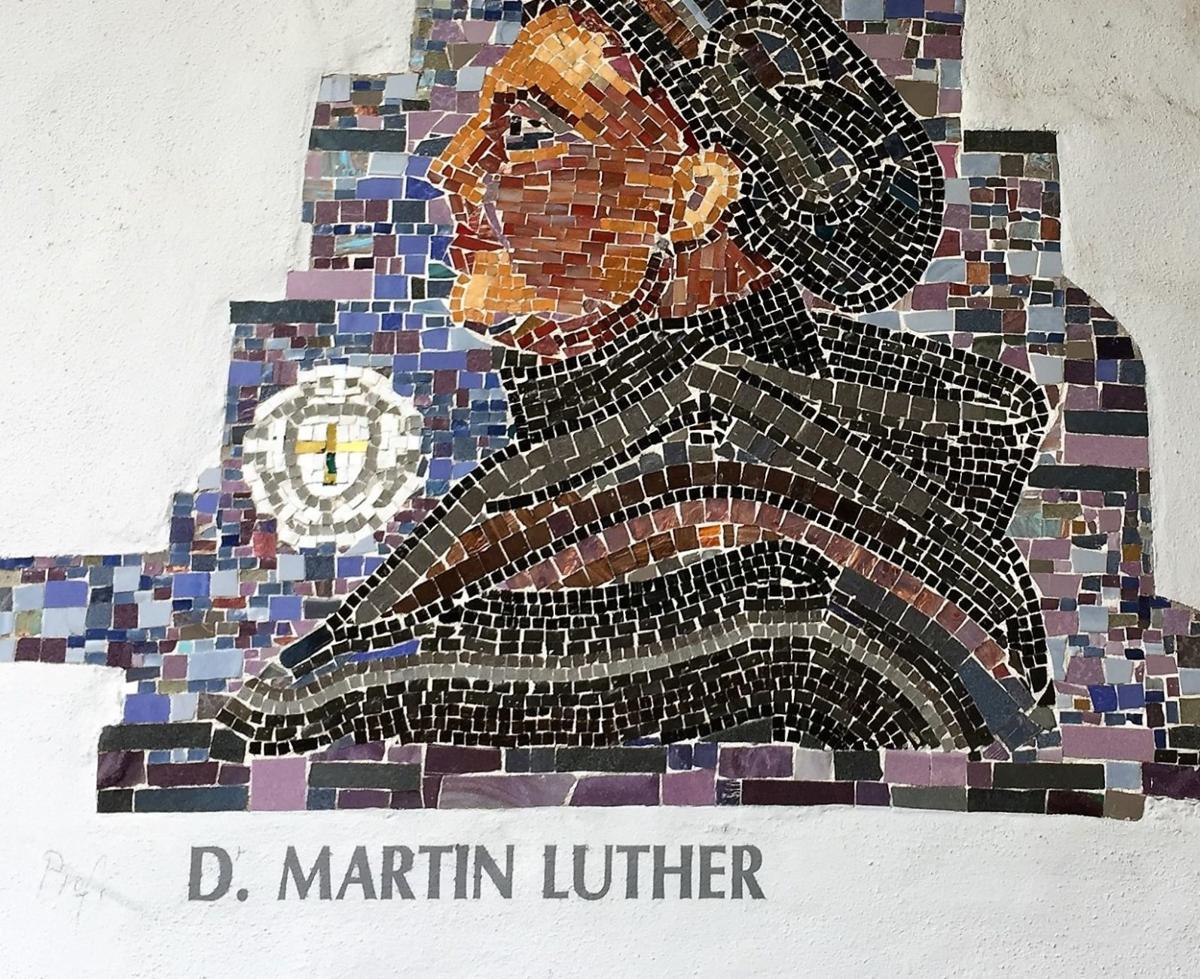 NEUF-BRISACH, France — On a pleasant morning before the summer vacation season was in full swing, the bicycle shop in the Rhine River port city of Breisach, Germany, was closed. So my wife and I walked into France. We crossed the wide river bridge and trekked about three miles of quiet country roads to Neuf-Brisach.

Neuf means “new” in French (except when neuf means nine), and Neuf-Brisach was new in the late 1600s. Today, it is one of the few remaining fortified towns built during the reign of Louis XIV to guard the eastern border of France. The town, which is on the list of UNESCO World Heritage Sites, is sleepy but still alive, surrounded by towering brick walls that seem impenetrable. In the Alsace, fortification was essential to surviving a seemingly endless stream of invading armies.

After a simple sidewalk café lunch, we visited the museum (10 euros) dedicated to Sébastien Le Prestre de Vauban, a French engineer who built 150 citadels and strongholds along France’s vulnerable borders. Their defensive designs are still considered masterpieces of military architecture.

Cruises on the Upper Rhine, flowing north from Switzerland, are not as popular with Americans as the Middle Rhine, with its hilltop castles, or the lower portion of the river that runs through the cities of Cologne and Bonn.

This stretch between Basel and Amsterdam is all about quiet, woodsy patches, where even the roads that run parallel to the river usually are out of sight. Itineraries include the medieval town of Switzerland’s Basel; France’s Strasbourg, home of the European Parliament; and Germany’s Mainz, home of Johannes Gutenberg, who invented the printing press. Centuries ago, this was one of Europe’s most important trade routes.

Basel sits at the border with both France and Germany and is the highest point of navigation for most passenger vessels on the Rhine. It’s a fine choice for a pre-cruise or post-cruise visit, with numerous restaurants that draw customers from France and Germany, busy cosmopolitan shopping streets, and a cluster of art museums. If you have extra time, the road to the delightful lake and city of Lucerne, Switzerland, takes little more than an hour. Tours are available in Basel to Lucerne.

Strasbourg is a great town for eating. Dozens of restaurants line the winding brick streets, their menu boards offering crepes, escargot, sausage with sauerkraut and chocolate. Whet your appetite with a tour to the Strasbourg Cathedral and the half-timbered houses around Place du Marché-aux-Cochons-de-Lait.

Mainz, a starting point for Upper Rhine cruises heading south, is an easy train ride from the Frankfurt airport and an excellent diversion if you ever find yourself with a long layover. Here you can indulge in one of the world’s oldest printing museums, in the aptly named Gutenberg Museum, then step across the road to see the 1,000-year-old Mainz Cathedral, home to elaborate tombs of the powerful, and religious art from across the centuries. Put St. Stephan’s Church on your morning itinerary to see Marc Chagall’s largest single work of stained glass in the best light.

Less visited are the towns of Speyer and Worms, historically important to both Christians and Jews. To see them, you may have to do some pre-trip planning or set up a private tour excursion; many ships pass them by.

Founded by the Romans, Speyer is one of Germany’s oldest cities, with a cathedral that is the country’s largest Romanesque structure. The Cathedral opened in 1106. The stone masons that built it also crafted a synagogue nearby for a Jewish community that had been invited to move into town. The synagogue was inaugurated in 1104, a ritual bath slightly later, and a women’s synagogue around 1250.

The Jewish community thrived here between 1084 and 1349, and though much of its remains have been lost, you can still visit the stone ruins of the ritual bath and of the synagogue, believed to be the oldest still standing Jewish place of worship in Europe from the Middle Ages. The bath has remained unaltered through the centuries and is one of the oldest of its kind still maintained for its religious significance (though not as an operational bath.) The town name of Speyer was transformed into the family name Shapiro for many of the Jews who once lived here and then moved elsewhere.

Just 22 miles to the north lies Worms, best known as the town where theologian Martin Luther defied the Holy Roman Emperor in 1521. Though he was charged with heresy, Luther refused to recant his writings in testimony to an assembly called the Diet of Worms.

Worms city tour guides will lead you through the Martin Luther story. They also explain the town’s continuing Jewish community, dating to the early Christa era and thought to be the oldest in Germany. The Worms synagogue complex was in constant use as a place of worship for more than 900 years before it burned in 1938; after World War II, it was reconstructed on the origin site with the original stones. The impressive ritual bath has remained largely as it was in the Middle Ages. In the medieval cemetery, most of the Jewish gravestones continue to stand in their original position. (The Jewish cemetery in nearby Mainz is home to the oldest known Jewish gravestones north of the Alps.)

To see all these sites on a river cruise, you may have to do some extra pre-trip planning or set up a private tour excursion. Some ships do not cover all of the possible port stops in their daily itinerary, which typically include complimentary tours at each stop. My wife and I did two voyages — touring Mainz, Worms, and Strasbourg from a Viking River cruise, then Mainz, Strasbourg, Speyer, and Neuf-Brisach from a Crystal River cruise.

One plan is to stay overnight in Mainz before or after a cruise, using a guide to drive to Worms and Speyer if they are not on your cruise itinerary.

FINDING A RIVER CRUISE: All major river cruise lines offer sailings from Basel, Switzerland; check out cruisemapper.com for a schedule. Most Upper Rhine cruises sail between Basel and Amsterdam, northbound and southbound. Train travel between Basel and Zurich takes about an hour.

David Molyneaux writes regularly about trends in cruising. He is editor of TheTravelMavens.com

The first Starbucks opened in Seattle in 1971. Today there are over 20,000 stores and growing around the globe. Lines form from Brooklyn to Bo…

Is it creepy or efficient technology? This Princess cruise gives all 3,660 passengers a medallion so the staff know where you are at all times.

Outside the walls of the fortified city of Neuf-Brisach, France, with a design of the octagon-shaped city laid out in the grass.

Ruins of the Jewish Synagogue in Speyer, Germany, inaugurated in 1104

Lunch board in Strasbourg, France, lists specialties baked in flames.

Choices for lunch in Strasbourg, France.