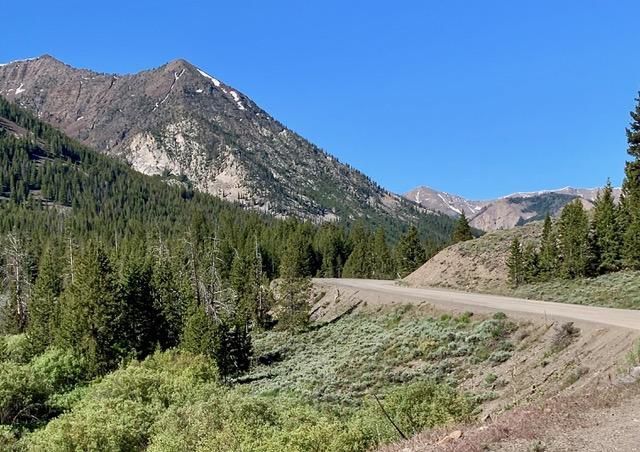 Trail Creek Road as it passes through the Sawtooth National Forest northeast of Ketchum, Idaho. 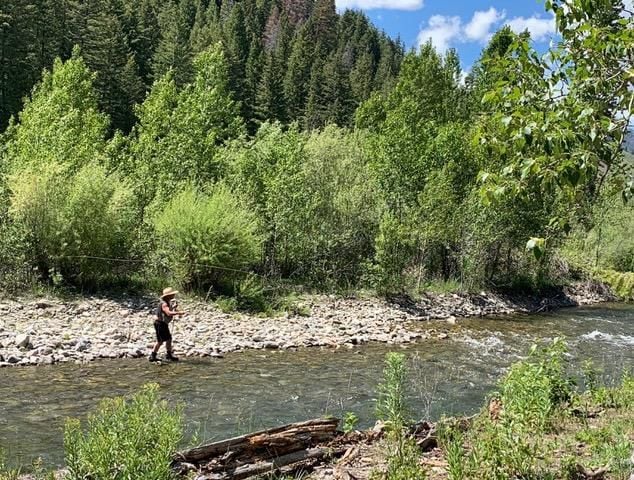 Fly fishing in the Wood River in Ketchum, Idaho.

It was time. Safety is important, but life involves risk. After more than three months of limited freedom and movement, we did some research and made a plan.

It was still too soon to feel comfortable sharing a plane with others, even for a short flight, so the road not only beckoned but was clearly the safer choice, with just the two of us in our own car. Spending time in big cities was also not appealing. An alluring idea emerged involving the natural splendor of the northwest, and the National Park Service.

Almost daily checking of the websites for Yosemite, Sequoia, Crater Lake, Yellowstone,Grand Teton and Glacier showed Glacier National Park to be the most likely place to be open, uncrowded and safe by the last week of June. Located in northwest Montana and abutting the still closed border with Canada, it is one of the more remote spots in our great country.

Bonus! Glacier reopened June 15 and we were able to make an online reservation for the Lake McDonald Lodge in the middle of the park. Entry would have to be from the west, as the Blackfeet Nation reservation bordering the park on the east was not yet ready to reopen and provide park access, further limiting crowd potential.

Once our primary destination and dates were settled we built out the rest of the itinerary focused on stays in Idaho, Montana and Oregon, states that showed low COVID-19 rates, especially in the rural parts of each state.

Plans and reservations made, we loaded the trusty Subaru and headed east, easily cruising on a Sunday morning through Sacramento and on to the beauty of the Sierra without slowing, and crossing into Nevada in less than three hours. We continued our eastbound dash on lightly trafficked Interstate 80, arriving in the less than lovely town of Elko in time for an outdoor dinner. We spent a safe and clean overnight in a new Hampton Inn by the freeway.

Things became more scenic the next day, as we went north on US 93 from Wells, Nevada, noticing wildlife overpasses to help reduce roadkill. On into southern Idaho and through busy Twin Falls, we discovered its growth is accompanied by heavy traffic as we continued north over the yawning Snake River Canyon at the north end of the city.

State Highway 75 brought us to the Sun Valley area and the pretty town of Ketchum, the final home and resting place of Ernest Hemingway, for the next night. Our room at the Hotel Ketchum looked over the Wood River valley to the steep mountainside of the Bald Mountain ski area just outside of town.

Ketchum is easily walkable, allowing us to first stroll a few blocks to the river, where a fly fisherman was patiently trying his luck in the clear, fast-moving stream. Beautiful homes shaded by quaking aspen and cottonwood trees line one side of the shore, with an easy public walking path between them and the water.

Ketchum is also very shoppable, though some of its numerous businesses had not yet reopened. The shops that were open provided sanitizer for mandatory use at the front door and required facemasks. One downtown street has been converted to pedestrian use, accommodating dining and browsing as well as social distancing.

Lunch and dinner were on outdoor decks, with Jean having a most unusual and quite delicious cauliflower steak. The streets of Ketchum rolled up early that night, allowing a peaceful sleep.

As the town was awakening the next morning, we started toward our next destination of Missoula, Montana. Following the instructions of Google Maps, we went out of town to the northeast on Sun Valley Road by the edge of its famous namesake resort, with its own collections of ski runs, golf course, lodgings and restaurants, and other attractions.

Some miles beyond the resort boundary and a memorial to Ernest Hemingway the road changes names to Trail Creek Road. A bit to our surprise, it also becomes a well maintained gravel road as it passes through the beautiful Sawtooth National Forest between Sheep Mountain and Shelly Mountain to a summit of 7,896 feet, then continues through the neighboring Challis National Forest. Several Forest Service campsites dot the route, set well back from the road along various tree-lined streams. Our initial nervousness about the road eased as we encountered trailers and RVs in both directions.

After about 26 miles of gravel at about 20 miles per hour we returned to pavement, with cattle ranches along the way, shortly before rejoining US 93 to continue north. The road here is also known as the Salmon River Scenic Byway, and at times follows the path of the Lewis and Clark Trail as it passes through the Salmon-Challis National Forest, then crossing into Montana at Lost Trail Pass.

Eagles soared as we continued on this almost empty two-lane highway in perfect condition, alongside the river through the Bitterroot Valley until arriving in Missoula, home of the University of Montana.

Our aptly named Edgewater Double Tree Hotel sits on the bank of the Clark Fork River that runs through the city. The university campus, quiet during our visit, is on the opposite side of the stream. The area was in a heat wave and the easily accessed chilly, fast-moving water invited many people to fish, swim, tube, kayak, raft and even surf rapids in relief.

As we enjoyed an excellent pizza with just enough shade on the patio of the hotel restaurant, we watched young men jump and dive into the river from the pedestrian bridge, then swim to shore to the applause of their friends. The same bridge provided us with an after-dinner stroll using paved paths on both sides of the river.

Only two minor disappointment in Missoula, one that the large Barnes & Noble bookstore closed early at 3 p.m. so we could not get maps; and two that the hotel pool was not yet open. However, the air conditioning worked fine in our room.

Now on to Glacier!

Watch it now: 6 Tips for a Safe Road Trip Amid COVID-19

Travel Memories: A ramble in Italy

Travel memories: A honeymoon in Roatan,1992

Early in our relationship, I discovered that Jean knew how to snorkel and had her basic scuba diving certificate. She was enthusiastic about b…

Traveling via memory to Tobago

The Hassers, residents of Napa, remember a trip they took 20 years ago to Tobago.

The road trip to Glacier National Park, continued, Part 2 of 3

Traveling to Glacier National Park by car during COVID-19 proves to be easy and rewarding.

'Dirty Dancing' lake filling up 12 years after it dried up

'Dirty Dancing' lake filling up 12 years after it dried up

Hotel Do’s & Don'ts! Here Are a Few Ways You Can Make Your Hotel Stay Better!

Hotel Do’s & Don'ts! Here Are a Few Ways You Can Make Your Hotel Stay Better!

Trail Creek Road as it passes through the Sawtooth National Forest northeast of Ketchum, Idaho.

Fly fishing in the Wood River in Ketchum, Idaho.