The 'Lazarus' species: How a resort in Fiji helped bring back a nearly extinct iguana
Share this
× 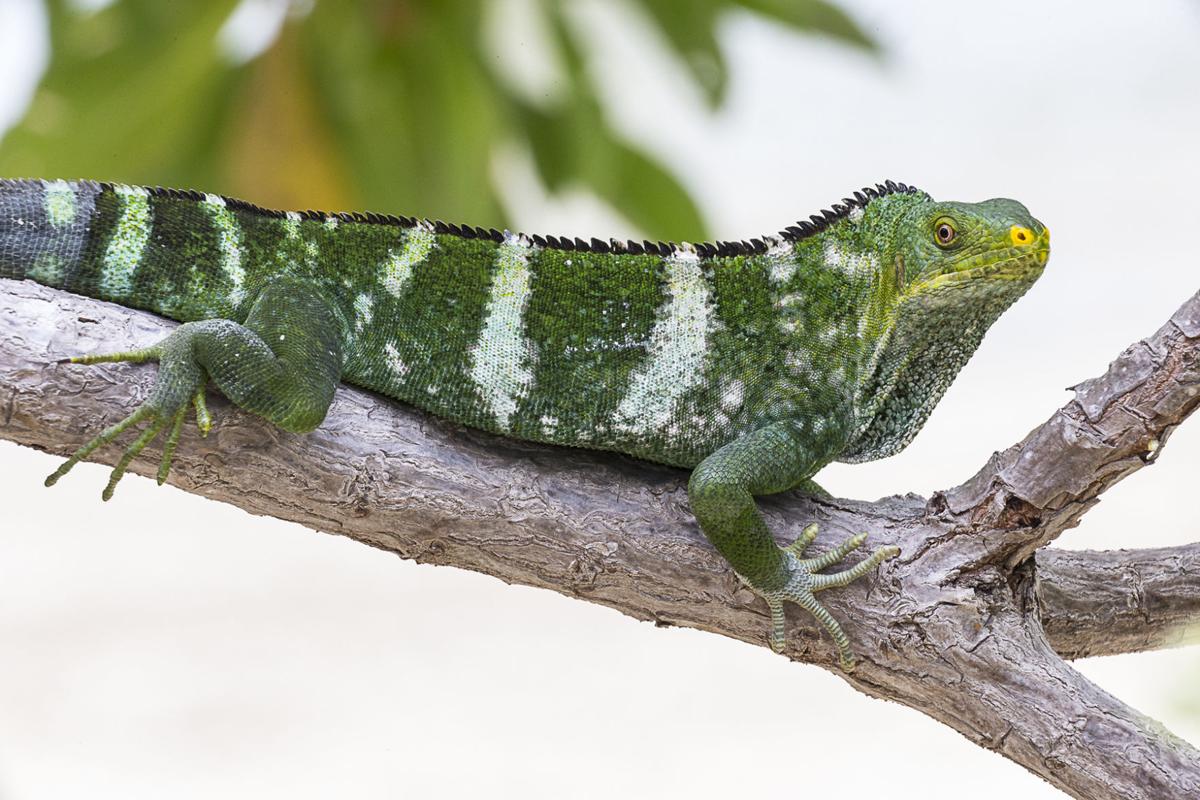 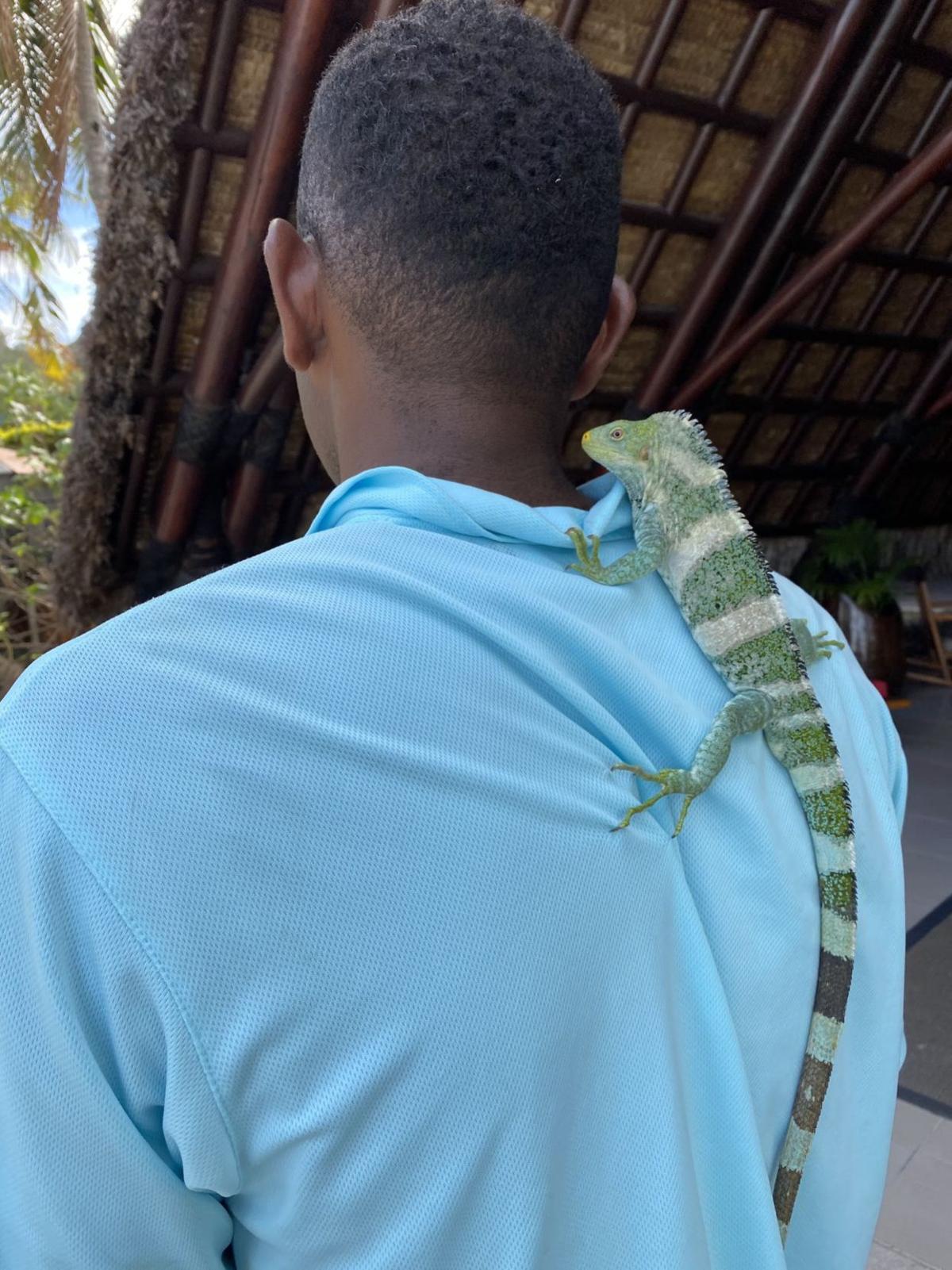 Malolo, the Fijian Crested Iguana used for education for children and guests, gets a ride on the back of an employee of Likuliku Lagoon Resort. 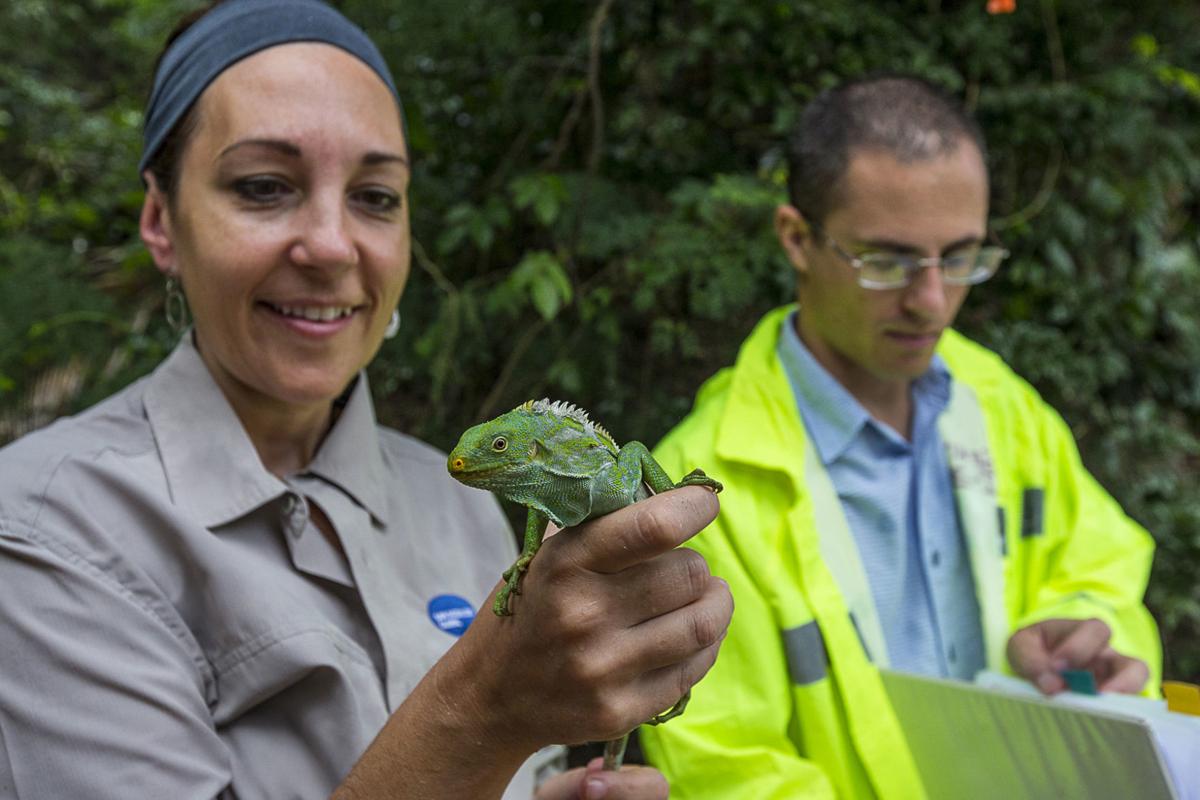 Kim Gray and Adam Claus with a Fijian Crested Iguana.

“The idea that we could possibly bring a species back from the brink of extinction, how could we possibly turn away?” Steve Anstey, general manager of Ahura Resorts in Fiji.

On a tiny island in the South Pacific Ocean, a story of hope and regeneration for a species thought to be extinct.

Steve Anstey, general manager of Ahura Resorts in Fiji, had been in hotel management for years and had always been interested in conservation. When he built a new luxury resort, Likuliku, on Malolo Levu island, he tried to take a light touch on the land. He put a fire break around the property to protect and preserve the natural forest. He also started a program to take out non-native predators, feral cats, dogs and rats, that were killing native animals and birds.

Little did he know that those two simple acts would lay the foundation for a miracle of sorts on the tiny island.

The Fijian Crested Iguana, Brachylophus vitiensis, a prehistoric resident of the islands, had not been spotted for 25 years and was thought to be extinct. This species existed only in that corner of the world — nowhere else.

The tropical dry forest habitat, where the iguanas live, is one of the most endangered ecosystems on the planet. Before climate change, it had covered Malolo Levu and nearby islands, but now, only about 1% remained, most of it in small, isolated pockets. This forest supported not only the Fijian Crested Iguana, but also many other native animals and birds.

To lay their eggs, female iguanas come down from the treetops, dig an eight-inch hole, lay three to four eggs, then leave them for nine months to incubate.

But the non-native predators had been preying on the iguanas, digging up their eggs and then devouring the young that managed to hatch. With the disappearance of their habitat and the predator problem, it was no wonder the iguanas had become extinct.

In 2010, Anstey’s employees came to him, excited that they had found an injured female iguana. At first, he was confused. What did finding an iguana have to do with running a resort?

Once his manager explained that the species was thought to be extinct, Anstey knew the importance of trying to save this one. But with no veterinarians on the island, he arranged for the injured iguana to travel to the main island of Viti Levu, to Kula Wild Adventure park, where she could be treated.

Sadly, the iguana died shortly after arriving at the park. But by a stroke of luck, two leading iguana experts, Dr. Robert Fisher, from the United States Geological Survey and Dr. Peter Harlowe of Taronga Zoo, were visiting Fiji and took a DNA sample. It was sent to San Diego Zoo Global in the U.S..

The news came back six weeks later that the injured iguana had been a Malolo Levu Island Fijian Crested Iguana, one of the most endangered species on the planet. The rare species had been rediscovered.

Excitement increased when, within the next six months, employees found a baby male and a young female iguana. Over the next few years, a few more iguanas were found, creating international scientific interest.

In 2012, a team of scientists, researchers including Robert Fisher, Peter Harlow and Kim Gray, from San Diego Zoo Global, arrived. The luxury resort was now not only providing a pristine, island experience for guests on vacation, but was to become the scene of a major scientific research project. Robert Fisher acknowledged the work that Anstey had already done as the foundation for the resurgence of the iguanas.

“This is called a Lazarus species, one brought back from the dead,” Fisher said. “The fire break and eliminating the predators were business decisions Anstey made to improve and protect his resort, but they were also biodiversity actions. Which is why the iguanas started to come back.”

The scientists and the resort together created a program to support the iguanas. They would continue to eliminate the predators and increase the dry forest habitat. To do the latter, the resort started a nursery and began planting twenty species of native plants in 10-meter by 10-meter plots. The goal was to try to stitch together the remaining patches of dry forest habitat so that the iguanas could thrive.

“At first, Anstey didn’t even know what dry forest habitat was. But he took a leap, he listened to our advice and he invested in it,” Fisher said.

Four years passed and progress seemed slow, but in 2016 they had a breakthrough. They brought in Adam Clause, a Ph.D. student studying reptile conservation, for a two-month internship to analyze how they were doing.

“The wild iguana population had dipped so low, that we weren’t sure it was still viable,” Clause said. “But after Robert Fisher and Kim Gray trained me how to search for the iguanas at night, our excitement began to build, as I found new iguanas night after night.”

The forest was now full of baby iguanas! In fact, the babies seemed to outnumber the adults. The team’s years of hard work had paid off.

“The environmental problems of the world can sometimes seem unsurmountable,” Clause said. “But involving local people in conservation decisions, using science to inform interventions, and building a team of people with complementary skills creates a recipe for success in recovering almost any endangered species, worldwide. “This project is a shining example of that.”

“I got swept along in this wonderful journey of learning and was in a position to facilitate and to make it happen,” Anstey said. “The idea that we could possibly bring a species back from the brink of extinction, how could we possibly turn away?”

The resort has now planted over 6,500 trees on their property and the local villages have followed their lead, also planting trees. Anstey hired Fijian Sia Rasalato as a group environment manager, the first in the country to have that title. Rasalato manages the project and works to educate the locals, the staff and guests about the iguanas and the work to restore them. They also have a popular program for children visiting Malolo Island Resort.

Before reforestation, the soil quality was so poor, only noxious weeds would grow.

“As the dry forest has increased, the forest canopy absorbs carbon dioxide and also provides mulch, leaves and organic material on the ground to hold water, which means more water to grow plants,” Rasalato said. “In two and a half years, the soil has turned from red to black.”

“We haven’t had hoteliers who concentrated on the environment the way Anstey has spearheaded this project,” Rasalato said. “We have international companies sending employees out to plant trees. We have a far reach now.”

Kim Gray, from San Diego Zoo Global, along with Robert Fisher, helped create protected mini habitats for four pairs of iguanas. In these captive breeding sanctuaries, they have hatched an assurance population of four generations of iguanas and are the only facility in the world where the iguanas hatch under normal circumstances, with no incubator. When they are mature enough, they then are tagged and released back into the wild.

“To the Fijians, the crested Iguana is their national symbol, like our bald eagle. I want my children to know that there are people protecting these animals, so that they can be around forever,” Gray said.

“Working in this field, saving animals from extinction is a constant battle that we know we’re losing. And then we have this project in Fiji, such a beautiful place and people, and it gives us hope on so many levels. It makes all of our work worthwhile.”

The Fijian Crested Iguana is still listed as ‘critically endangered’ on the IUCN (International Union for Conservation of Nature) ‘Red List’ of threatened species.

Anstey has set up a foundation to continue the work he has spearheaded after he retires.

“The extinction of these iguanas has been happening for hundreds of years. We’ve been working now for 10,” Anstey said. “But so many aspects have come together. And we all love them. They are absolutely adorable, absolutely exquisite.”

IUCN Red List of threatened species is listed at iucnredlist.org.

To learn more about the iguana project, visit likulikulagoon.com.

Diane Covington-Carter is an award-winning writer and photographer who writes regularly for the Napa Valley Register. Read more of her work at dianecovingtoncarter.com.

Sheltering in place, 7,000 miles from home

Diane Covington-Carter, visiting New Zealand for three months, planned to fly home on April 6. Then the coronavirus shut down everything, including her path home.

Malolo, the Fijian Crested Iguana used for education for children and guests, gets a ride on the back of an employee of Likuliku Lagoon Resort.

Kim Gray and Adam Claus with a Fijian Crested Iguana.