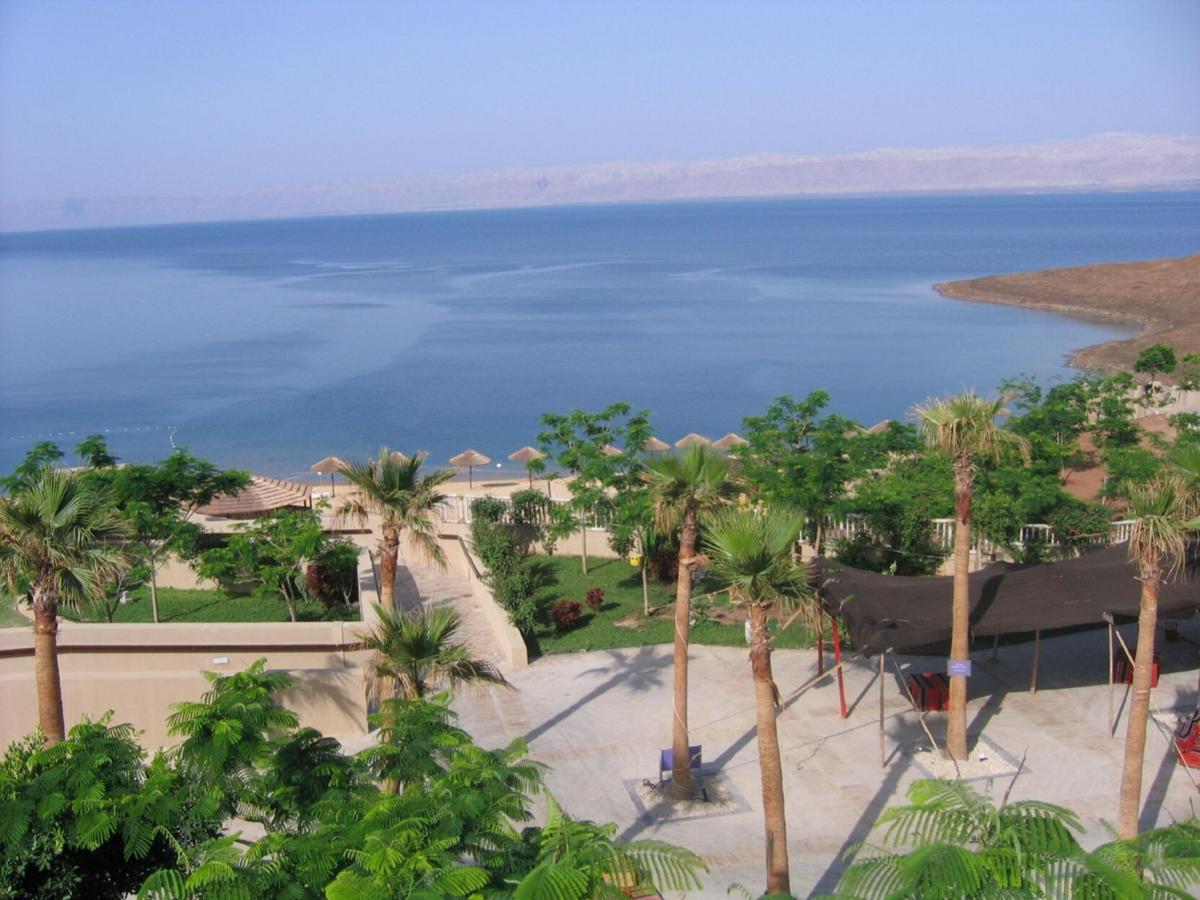 A view of the Dead Sea from Holiday Inn resort on its shore. 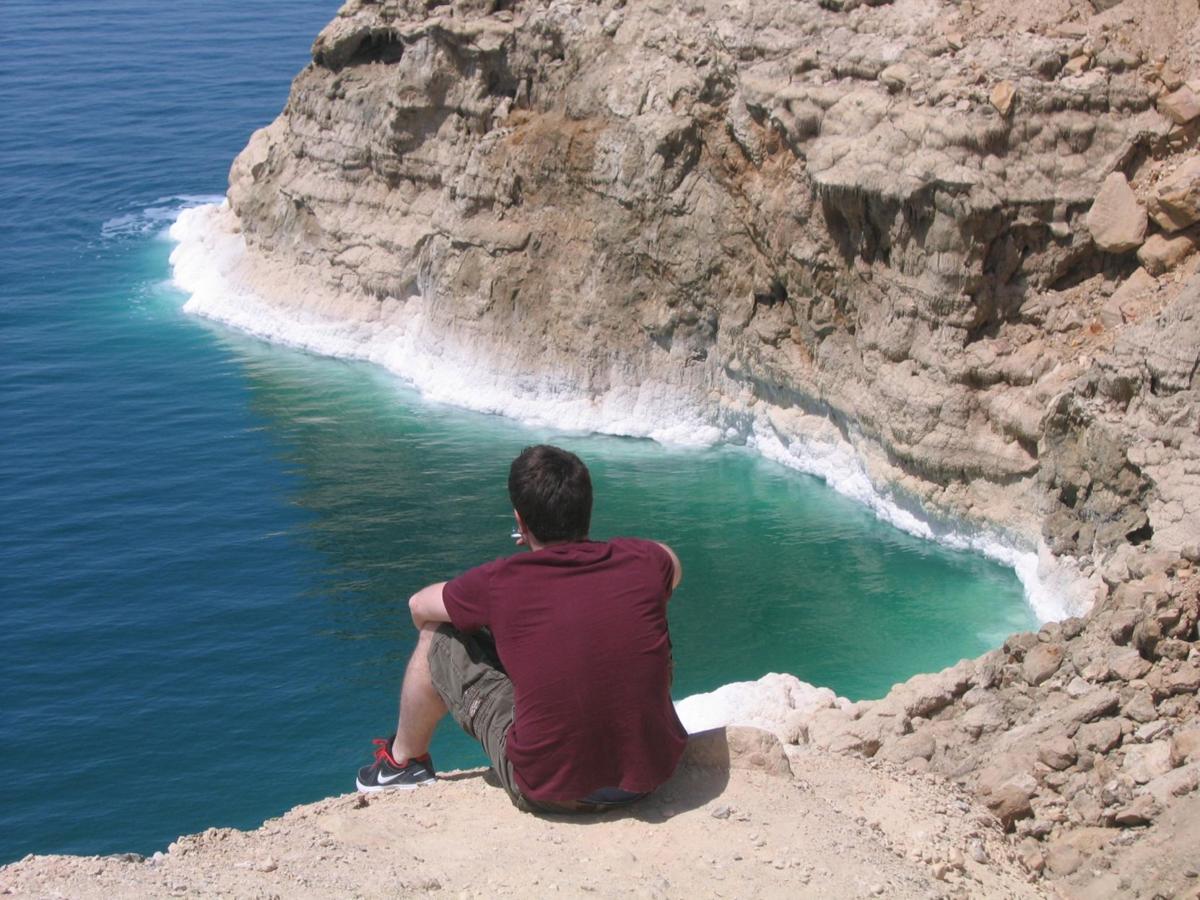 Salt is encrusted along the edge of the Dead Sea on the Jordanian side. The  lake borders Israel, Jordan, and the West Bank. 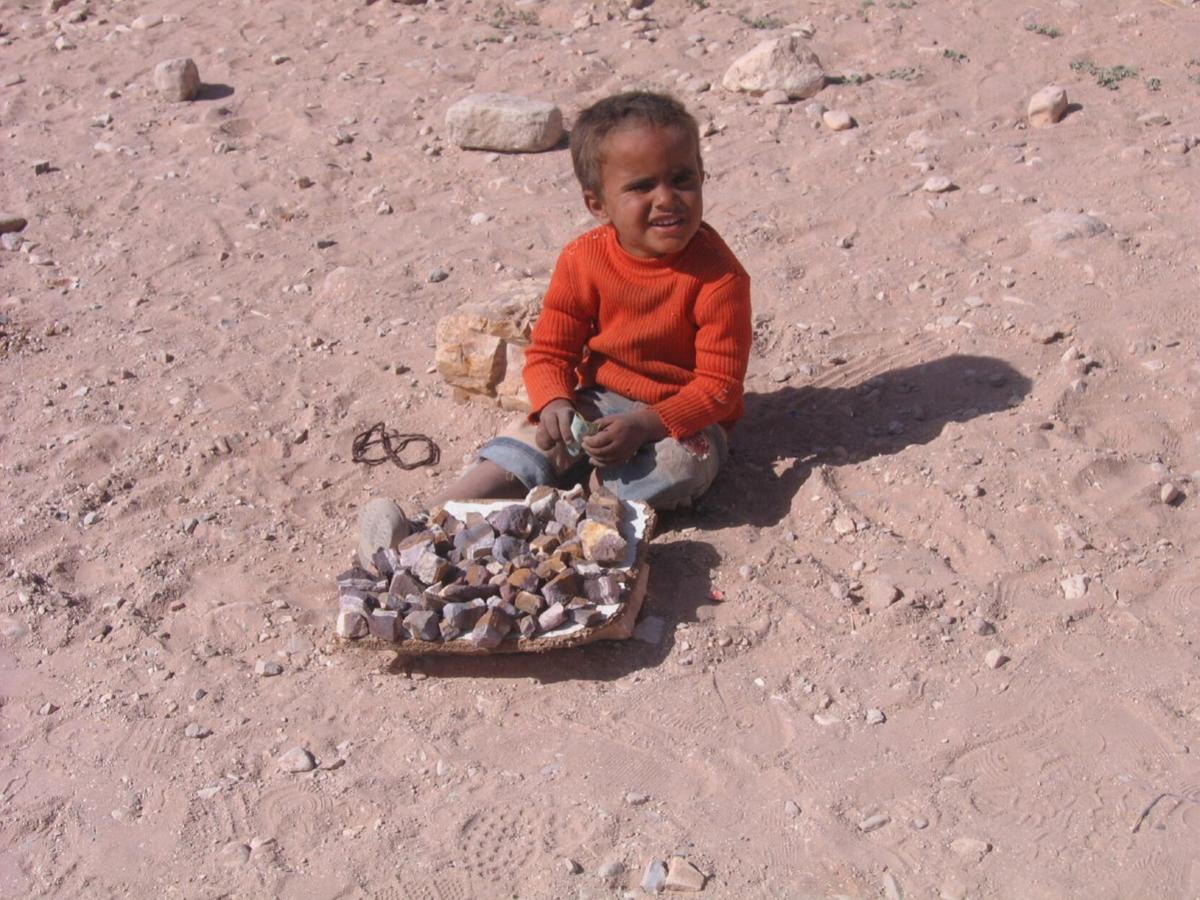 A child sells sea shells on the Jordan shore of the Dead Sea. 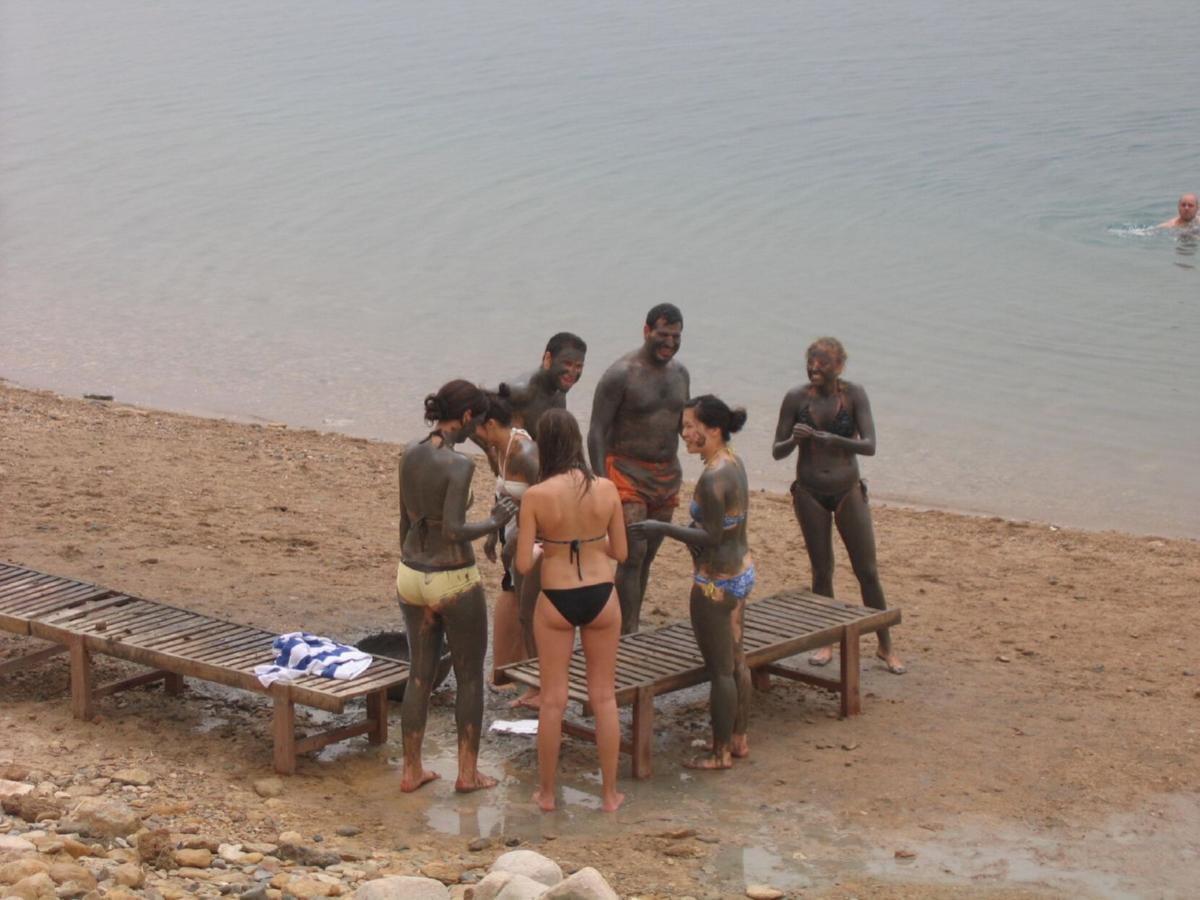 Visitors apply the famous mud at the edge of the Dead Sea.

DEAD SEA, Jordan — Once international travel opens its gates, why not begin at the very end, the bottom of the world, the mysterious and biblical body of water known as the Dead Sea, the lowest point on the face of the earth, and the final stop on most every Jordan tour.

Its very name staggers the imagination -- the sea where no one can sink or drown, the source of miraculous cures ranging from sanctity to virility (with hair restoration thrown in), where one can float for hours and read a newspaper (or tablet), and a mud bath can cleanse your body and soul (along with adding an instant and permanent suntan).

After visiting Jordan’s major attractions of the lost city of Petra, the Roman ruins at Jerash and the Wadi Rum desert where Lawrence of Arabia ruled, most tour operators schedule a quick overnight at one of the Dead Sea resorts, allowing just enough time for a float in the sea and a stop at the spa to stock up on some of those miracle creams and potions.

I spent three days here trying to find out what works and what doesn’t.

First, the Dead Sea is not a sea at all, but technically a landlocked lake surrounded by Jordan, Israel and Palestine. The only water trickling in comes from the River Jordan and there is no way out.

Second, the Dead Sea is not even dead. While there are no plants, fish or any other visible life forms, it is filled with microbes that get along quite happily in the salty mix.

Because of its landlocked position, the sea’s salt concentration is almost 35 percent, about 10 times saltier than ocean water. Stones and boulders at the water’s edge are encrusted with salt left by the lapping waves.

Yes, the Dead Sea is far and away the lowest point on earth, some 400 meters (1,400 feet) below sea level -- and it’s getting lower each year because water is being diverted to fill the needs of the surrounding countries. If this continues, scientists predict the sea could eventually be reduced to a wind-swept salt flat.

Yes, you can float and read a newspaper, and no, you cannot sink, both because of the high salt content.

But bad things can still happen.

“You could get shot,” the man at the concierge desk at my hotel said with a shrug of his shoulders. “But even then, you won’t sink.”

He explained that blunt, startling remark: Tourists are routinely advised to get out of the sea by sundown, as swimming or floating is only allowed during daylight and in designated areas. It’s only 10 miles across from Jordan to Israel and Palestine, a distance an expert swimmer could easily handle with float stops.

If a lone swimmer or group of swimmers are spotted approaching either shore suspiciously in the dead of night, drowning may be the least of their worries. That was also told to me a number of times by various individuals during my three-day stay, although no one could recall the last shooting at sea.

Good kid on the block

“We think of ourselves as the good kid in a bad neighborhood,” said my Jordanian tour guide, Manshee, “but anything is possible.”

And what a rough neighborhood it is, with Syria, Iraq, Lebanon, Saudi Arabia, Israel, Palestine and Egypt all within striking distance.

“It’s so difficult to convince people in your part of the world that it is no more dangerous here than in any of your own bad neighborhoods,” Manshee continued. “We often say we’re simply caught between Iraq and a hard place.”

Shortly after 9/11, Jordan tourism dropped to almost nothing, with as few as 50 people a day visiting Petra, one of the Seven Wonders of the World. At that time, entrance to Petra was actually on sale at half price.

Since then, tourism rose gradually until it hit record numbers in 2010. Then came Arab Spring and that record number was halved as the “neighborhood” grew uneasy. And now the pandemic has reduced tourism even lower than the 9/11 numbers.

There are about six sprawling resorts scattered like isolated fortresses along the Dead Sea. A number of others are in the planning stage but put on hold until Covid runs its course. The resort I stayed at was built by the Jordanian government as an investment and is now managed by an international hotel chain as a five-star property.

Getting back to the Dead Sea fact and fiction, no, you can’t sink but yes, you can drown. If one accidentally drinks enough of the salt water, the larynx could inflate and lead to suffocation and drowning. Passing out face-first in the water could obviously also lead to drowning.

Consequently, tourists are advised to float rather than try to swim as the heavy salt concentration could burn and damage eyes at the very least.

The alleged medical, therapeutic and beauty benefits credited to the sea waters go all the way back to Cleopatra. She was the first to cash in and had little cosmetic factories built along the shore.

Egyptians used certain elements from the sea for embalming and mummification. Today, you can see tourists covered face to toe in black mud, shuffling along the shore, looking much like living mummies.

“Many Russians and Scandinavians like to cover themselves in mud,” the man at the concierge desk told me. "They think it will darken their skin. They still look the same when they leave.”

But it is generally agreed by both tourists and locals that the Dead Sea waters and mud will result in a better complexion and help cure skin problems like psoriasis and eczema. Every spa in the area stocks a large supply of potions, lotions, bath salt, facial cream, mud masks, scrubs etc. at prices ranging from $25 to $1,000.

So yes, to an improved skin, but probably not, to the claims of hair restoration, virility and the like.

For Christians, the entire Dead Sea area, which covers some 50 miles, inspires their faith. They believe this is where God first spoke to man and gave the 10 Commandments to Moses, where Jesus was baptized, where Lot’s wife was turned into a pillar of salt, where the infamous cities of Sodom and Gomorrah once stood---even all the way back to where the Garden of Eden once flourished.

And so we end at the very beginning, with Adam and Eve.

Now doesn’t it seem almost sacrilegious that, in an area like this, tour operators would allow only enough time to get your toes wet in the Dead Sea?

Napa County Sheriff's officers made arrests at Lake Berryessa after finding heroin in a car and a loaded rifle on a jet ski.

Dominick A. Merle is co-founder of the International Food, Wine & Travel Writers Assn. and a frequent contributor. He resides in Montreal.

A view of the Dead Sea from Holiday Inn resort on its shore.

Salt is encrusted along the edge of the Dead Sea on the Jordanian side. The  lake borders Israel, Jordan, and the West Bank.

A child sells sea shells on the Jordan shore of the Dead Sea.

Visitors apply the famous mud at the edge of the Dead Sea.